If the idea of lush peaks watching over harbours and beaches floats your luxury yacht then a visit to this Caribbean island, part of the Lesser Antilles, might just suit. Sure, you can drop and flop at any of the luxe resorts on its coastline, but there’s so much more to do as well. Zip-line through the forest near Rodney Bay, check out the changing colours of the Diamond Waterfall before taking a soak in the adjacent mineral baths, or hike through the rainforest at the foot of Mount Gimlie to see amazing birds. Of course, there is also action aplenty on the water, from whale watching to kitesurfing and scuba diving.

Don’t miss out on the biggest party of the year, the St Lucia Jazz & Arts Festival, held in the capital Castries every May. But at other times, the town of Soufrière is a better bet for visitors. Located on a crescent bay, its colourful village is backed by the island’s major features, the two huge mountains, know as the Pitons, that erupt from the sea.

If crumbling castles set atop craggy mountains are your jam, Romania is the country for you. This is a place where the past is all around, from those aforementioned fortresses to the simple subsistence lifestyle practised in some of the more far-flung villages.

As a contrast, Bucharest is a capital city going places. Layers of its past, including its bleak and more recent communist history, can be seen throughout the streets, but there is also lively bar scene in Lipscani, the old town.

The Danube Delta, with its outstanding birdlife, and the Carpathian Mountains, where hiking trails traverse alpine meadows and pass glistening lakes, are great for outdoorsy types. Channel your inner bohemian as you hang out in towns like Vama Veche on the Black Sea, or get close to the legend of Dracula (and the real life stories of Vlad the Impaler, who is said to have spiked 80,000 of his enemies during the fifteenth century) in Transylvania. As well as visiting Bran Castle (thought to be the inspiration for Dracula’s home in Bram Stoker’s novel), hunker down in a hide in the forests near Brașov to spy bears, enjoy the thermal salt waters of Bear Lake, and sample palincă, the local plum brandy. Watch out: one shot is fine, two might leave you on the floor. 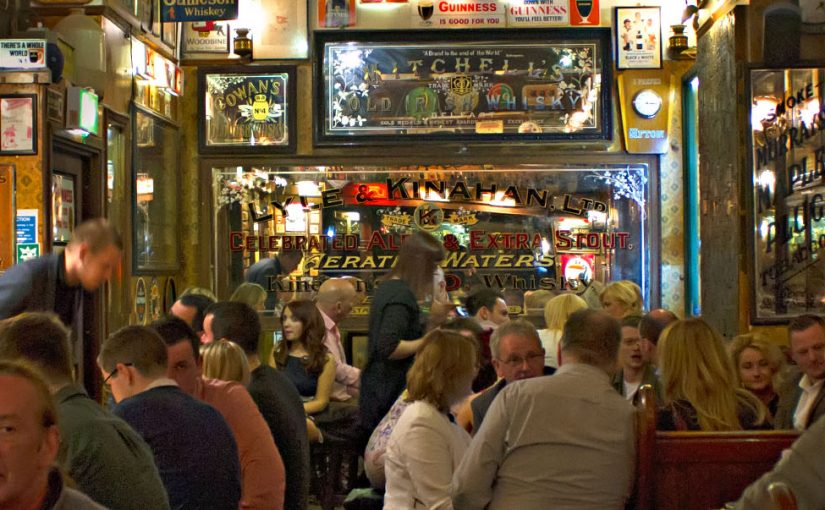 Did you know parts of Game of Thrones were filmed in Northern Ireland? You do now. And there’s a good reason! Bordering the Republic of Ireland and surrounded by sea on its eastern side, the country has an endless array of beautiful sights that could keep a film crew happy for decades.

Be guided by a history rich with ancient castles, pre-Christian monuments and a museum dedicated to the Titanic, which was built in Belfast before meeting its fate. Eco-tourism may be a buzz word, but nothing says ‘green’ like being in a country with a 150 days of rainfall a year. Rolling pastures wind up and down mountains and meet the stunning coastline where waves almost lick the foundations of sites like the haunted seventeenth-century Ballygally Castle in County Antrim. Scared? Don’t be. It’s now a wonderful hotel that typifies the adventure that awaits – just with a ghost or two thrown in.

Whichever direction you take, from the Causeway Coastal Route to country lanes linking charming villages, you’ll discover a place where laughter reigns and hospitality welcomes. As you tour the countryside, don’t forget to stop a while at Bushmills – King James I granted it a licence to produce whiskey in 1608, making it the oldest distillery in the world.

Monaco may be the second smallest country in the world, but what it lacks in size it makes up for in swag. The world’s wealthiest cruise into town in their Lamborghinis, check in to their suites at the Hôtel Hermitage or the Fairmont Monte Carlo then head for lunch at Joël Robuchon. Well, the city-state does have an exceptionally low company tax rate.

Chances are, though, if you’re anything like us, you probably don’t have wads of cash to burn in the designer boutiques of Cerle d’Or or on box seats at the Grand Prix. That doesn’t mean you should avoid Monaco all together. Monte Carlo is beautiful and easily walkable – head to the clifftop garden near the Town Hall for views of the harbour. Window shop, stare at the millionaires in their ostentatious cars and wander around the cathedral where Princess Grace is buried. If you do want to live it up, hire a yacht and sail down the French Riviera for a couple of hours or get dressed up (there’s a strict dress code) and head to the Casino de Monte-Carlo. During summer you can even play roulette on a terrace overlooking the bay.

Just don’t forget to take enough snaps to rival those of the Rich Kids of Instagram. #Blessed.

There is no doubting the beautiful island of Mauritius is known for its endless beaches, swaying palms and relaxation-inducing weather. However, there is more to this part of the world than just that. This mountainous island practically explodes from the Indian Ocean, east of Madagascar, to showcase spectacular scenery, incredible walks and unforgettable diving.

In the capital of Port Louis there’s a melding of the cultures, from Africa, India, the Middle East and parts of Asia, that have washed up here over the years. Check out the Central Market before moving on to the rest of the island. Take the two-hour walk to the Black River Peak lookout in the Black River Gorge National Park, where you look out over the whole island, then head back towards the coast. It’s all about the beach, so hire a car and find an isolated one, jump on a board or try your hand at kitesurfing at Le Morne, or check in with one of the local dive operators to hit shipwrecks and the shallow Sharks’ Trench.

If you’ve got some time on your hands, Rodrigues is the one of the nation’s furthest flung outposts, 650 kilometres from the main island. Here the residents live a simple existence among nature’s finery and welcome visitors looking for complete relaxation.

It’s not the origin of those addictive choc-malt balls, yet Malta may prove to be equally as irresistible.

Secluded bays, rugged cliffs, architecture from all the great historical eras and huge plates of fresh seafood pinpoint this group of idyllic islands as part of the Mediterranean. Visit here and you may even be following in the pedicured footsteps of the stars, since a number of Hollywood films, including Troy, Gladiator and The Da Vinci Code have beeb shot here. It’s no wonder directors salivate – the capital Valletta is a camera-friendly siren armed with assets such as a spectacular harbour, Baroque architecture and the impressive St John’s Co-Cathedral.

As well as its visual offerings, Malta is a feast for the stomach, with dishes that take on flavours from Italy, Spain, France and the Middle East. To supplement the beaching and the feasting, discover fine art in its museums, hike in solitude on Comino, an island pirates and smugglers once used as a hideout, and get cultural trying to decipher the meaning of ghana, a traditional sing-song ‘conversation’ accompanied by guitar. There’s also the chance to let down your hair at Maltese Carnival, a vibrant alternative to the one in Venice.

There’s a reason why everyone thinks of soft sand, pristine water and blissing out when the Maldives is mentioned. This small archipelagic nation of almost 1200 islands hit the tourism radar in the 1970s and has since become one of the world’s top tropical destinations. In the midst of the Indian Ocean you can swim up to your villa’s balcony, snorkel on some of the best reefs the world has to offer, sunbathe in the never-ending sunshine, and eat the tropical fruits the Maldives are known for.

There was a time – until quite recently, in fact – when tourism was confined to the luxury resorts built on certain islands. Now, however, independent travel on public ferries and staying in local communities is on the rise and it’s one of the best aspects of visiting here. The Maldivians are so welcoming you’ll feel like you’re at your second home by the beach. Don’t miss Eid al-Fitr, the three-day festival that marks the end of Ramadan.

They say good things come in small packages and Lithuania is certainly tiny. Taking up only about 65,300 square kilometres of Eastern Europe, it manages to cram in a hugely diverse range of heritage, culture and natural beauty, making for an excellent piece of proof for this rule.

Situated on the Baltic Sea, perhaps the most awe-inspiring of all its features is the sandy, white Curonian Spit (a long, thin dune that separates the lake of the same name from the sea) – it’s not difficult to see why French writer Jean-Paul Sarte described it as being like the ‘entrance to paradise’. Despite this entrance setting a high bar, the rest of the country doesn’t disappoint. You can explore castles in Trakai, muddle through archeological sites in Kernave then take your pick of the five national parks to get a breath of really fresh air. For those of you with bad knees, the highest point in the country is less than 300 metres above sea level, so there’s no excuse not to get your walking shoes on.

It might be small and it might be quiet, but it’s definitely a country to yell to the world about.

There aren’t many square metres of Kyrgyzstan that aren’t covered by mountains and rolling pastures (called jailoos), so if you’re after late-night action and crazy hook-ups with other wacky backpackers it may not be the place for.

If not though, try to memorise the spelling and get researching, because this Central Asian country may just change the way you travel for good. This is a country where there is little in the way of an infrastructure for visitors – about the only tourists you’ll find are the Russians who drop their towels on the shores of Lake Issyk-Köl in the summer.

Instead you’ll get around as the locals do, enjoying hanging out with families at their homestays. This is a chance to experience Kyrgyz life, stay in a yurt and sample traditional meals. In between, hike in the Tian Shan mountains, see the alpine lakes and go horse riding. If you want to observe an ancient ritual, rock up in March when Nowruz, a celebration of winter’s end, takes place. The highlight is the playing of the Kyrgyzstan national sport, kok-buru. Basically two teams of horsemen compete over a goat carcass, trying to get it in their goal at one end of a playing field. Yep, it’s gruesome.

There are some cities dotted around, but they’re generally just a place to regroup before heading out into the wilderness again. As far as adventures go, it doesn’t come much better than this undiscovered gem.

Sadly, many of the countries surrounding it are completely off limits for travellers these days, but anyone interested in the ancient world or a more modern Middle East can still explore Jordan.

No doubt, most visitors head straight for Petra, the incredible pink city built by the Nabataeans in about 300BC and undiscovered by explorers from the western world until 1812. For ancient history buffs, however, there are plenty of other impressive architectural sites, including the Umm Al-Jimal Ruins near the Syrian border, with about 150 buildings still visible, and the 2000-year-old Greco-Roman city of Jerash. Even the capital Amman boasts Roman ruins among its mosques, malls and cafes.

Go 4WDing to Wadi Rum, an amazing red landscape of rock formations and riverbeds, before sleeping under the stars at one of the camps. There’s hiking to be done at the Wadi Mujiz canyon, and reefs to be explored at Aqaba on the Red Sea, Jordan’s only resort town.