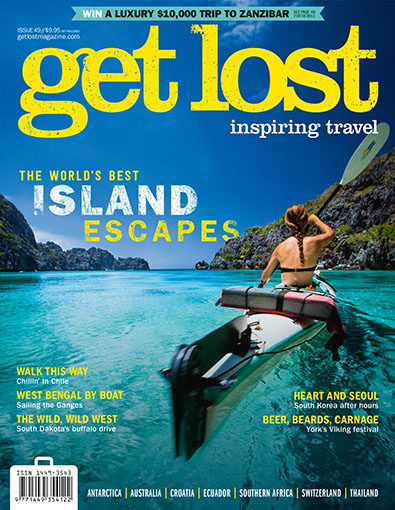 Banish the winter blues with 12 of the world’s best island escapes that will have you grabbing your passport and hightailing it out of here. Meet the cowboys of South Dakota, uncover the cool side of Seoul, join a celebration of beards, booze and battleaxes in England, and hike into Chile’s peaceful Lake District. Plus there’s Antarctica, Ecuador, India and more. 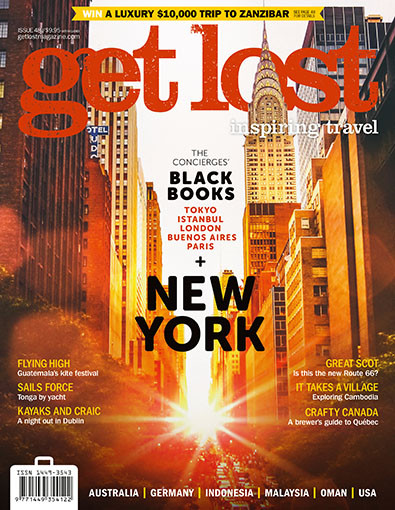 Discover hidden gems in the world’s most popular cities. In issue 48, we open the black books of the best concierges in the biz. Get on deck of a dhow in Oman’s Musandam Peninsula, drive Scotland’s answer to Route 66, go paddling in Cambodia and sail the clear, blue waters of Tonga. Plus, there’s Malaysia, Hawaii, Guatemala, Dublin after dark, the Swan Valley, Québec City and much, much more. 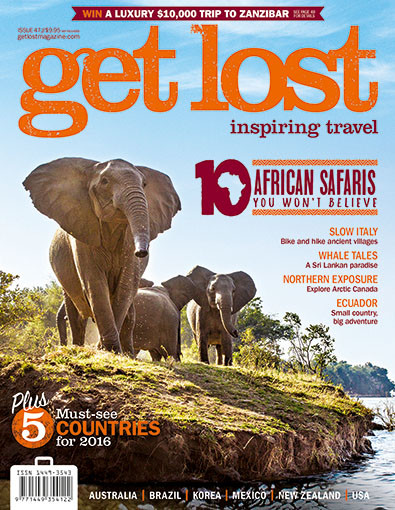 Ditch the jeep and take off on an African safari with a difference. In issue 47, we uncover the 10 adventures across this vast continent you won’t believe. Board a former Russian spy ship for a trip through Arctic Canada, travel from mountain to ocean in Ecuador and take the slow road through northern Tuscany. Plus, there’s beach bliss in Sri Lanka, Jazz Fest in the USA, sweet treats in South Korea, nightlife in New Zealand and much, much more. 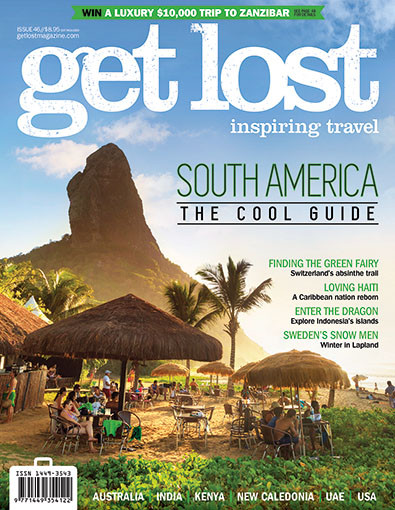 Go crazy for South America with the ultimate Cool Guide to the continent in issue 46. Take to the skies on a flying safari over Kenya, explore vodou culture in Haiti and dice with deadly dragons in Indonesia. You’ll also discover Rome through the eyes of a celebrity chef, chase the green fairy in Switzerland and set sail in Tasmania. Plus, there’s a winter wonderland in Sweden, the Rugby Sevens in Las Vegas, an adventure into the north of New Caledonia, nightlife in Abu Dhabi and much, much more. 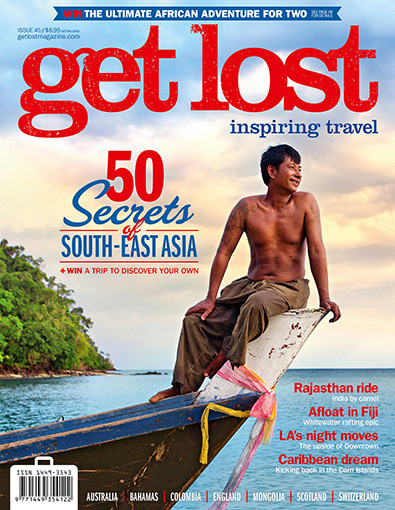 Lose yourself in South-East Asia in issue 45, where we unravel 50 secret experiences that will transform you from tourist to seasoned traveller. Feel the heat at England’s festival of blazing barrels, traverse the desert plains of Rajasthan on a camel, and explore the wilderness on Lord Howe Island. Plus, there’s the burgeoning nightlife in Downtown LA, a Fijian adventure that’s far removed from cookie-cutter resorts, a trip to paradise in Nicaragua’s Corn Islands and much, much more. 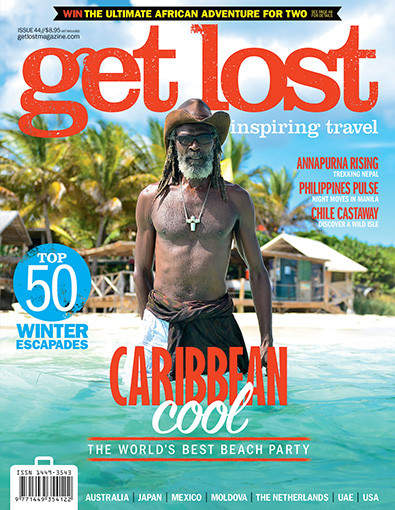 Unearth the world’s coolest experiences on ice in issue 44. We share 50 chill thrills that will have you begging for snow, go treasure hunting on Chile’s Robinson Crusoe Island, hit the dance floor at the Caribbean’s best beach party, hike the majestic Annapurna circuit in Nepal and celebrate a hedonistic winter solstice at Tasmania’s Dark Mofo. We also quaff wine in the cellars of Moldova, Europe’s least visited nation, discover what’s hot in Manila after dark and uncover the hidden alleyways of Japan’s Asakusa neighbourhood with a Tokyo local. 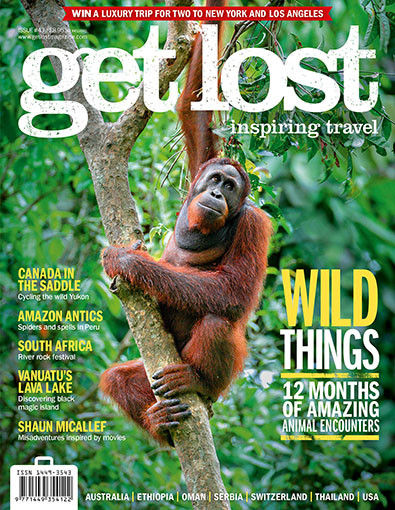 Imagine the thrill of staring into the eyes of an orangutan in Malaysia or diving with hammerhead sharks in Costa Rica. Go wild in issue 43 with 12 awesome wildlife encounters from across the globe. We also cycle across Canada’s wild Yukon, meet shamans and spiders in the Amazon, peer into a volcano on Vanuatu’s Ambrym Island and explore Muscat by night. Plus there are tales from comedian Shaun Micallef, a wet and wild South African music festival, adventures in Thailand and Switzerland, and much, much more. 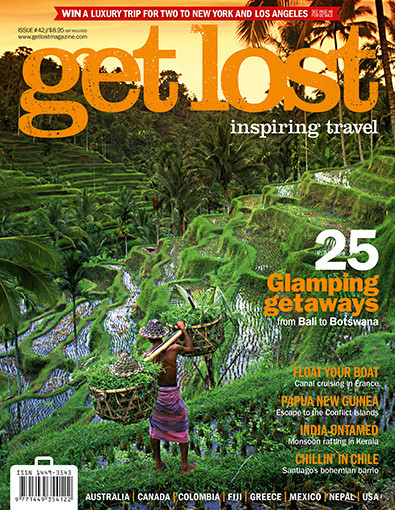 Get your glamp on with issue 42, when we uncover 25 of the world’s best luxury camping destinations, from Australia to Zambia. Guide your own canal boat through French wine country, check out Vancouver’s bar scene and ride the monsoonal rapids in Kerala. Plus there’s PNG’s peaceful Conflict Islands, Mexican wrestling, a wild festival in Nepal, holiday ideas for Fiji and much more. 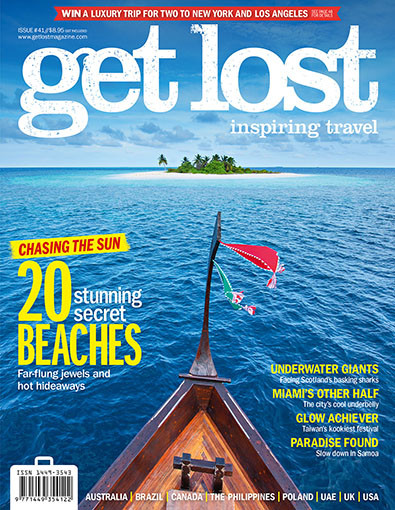 Chase the sun with issue 41, when we uncover 20 of the world’s most stunning secret beaches, from Mexico to the Philippines. Dive into Scottish waters to swim with basking sharks, leave the fast lane behind in Samoa, and check out another side of after-hours Miami. Plus there’s a kitsch Taiwan lantern festival, bear spotting in Canada, a little-known Brazilian park that’s full of adventure and so much more. 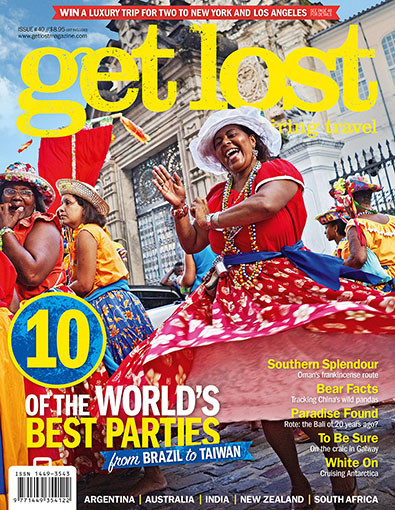 Celebrate our 10th birthday with issue 40! Let your hair down at the world’s best parties, from Brazil to Taiwan. Then trek into Chinese wilderness searching for pandas, head to the deep south on an Antarctic adventure, visit the Indonesian island reminiscent of Bali 20 years ago, and follow Oman’s ancient frankincense route. Plus there’s an epicurean adventure in Argentina, a flight over frosty mountains in New Zealand, a local’s guide to Cape Town, insight into the Pink Vigilantes in India and so much more.