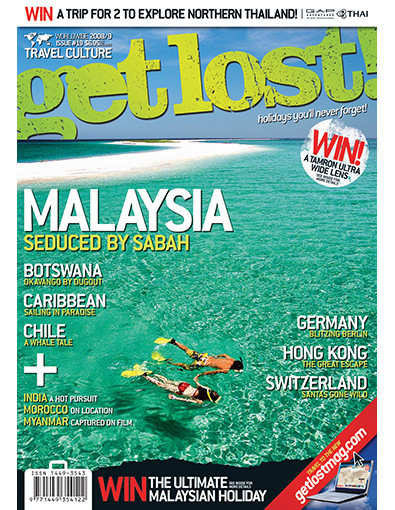 Join us in the Swiss Alps ’cause Santa Claus is coming to town. In issue 19 we don a red suit for Clau Wau, the merriest of festivals where contestants dressed as the jolly fat man compete in a range of bizarre games in order to be dubbed the best Santa of all. Then swing down to Berlin for 24 hours in one of Europe’s coolest cities. Spot whales in Chile, sail Caribbean waters in Anguilla, hike to great heights in Malaysia, meet a fellow who kiteboards around the world, plus so much more. 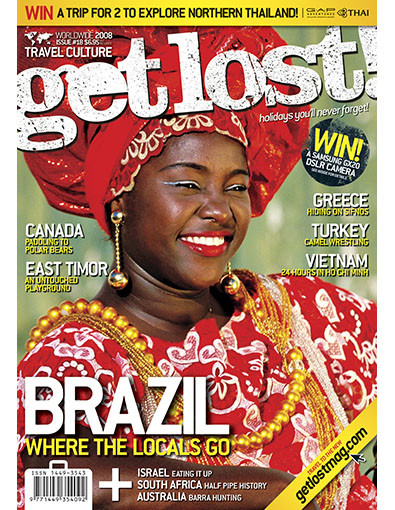 Jump into a kayak and go on a bear hunt in Canada’s Hudson Bay, then join the throng who gather in Turkey for a very different type of animal encounter – camel wrestling. Get your mouth around Israel’s food scene and fish for barramundi in Australia’s Northern Territory. While you’re in the land down under, head to Melbourne’s best music venues for a night on the town, or witness the True North Olympics that takes place on a tiny white sand island off the coast of Western Australia. Plus there’s skateboarding in South Africa, a journey to East Timor and so much more. 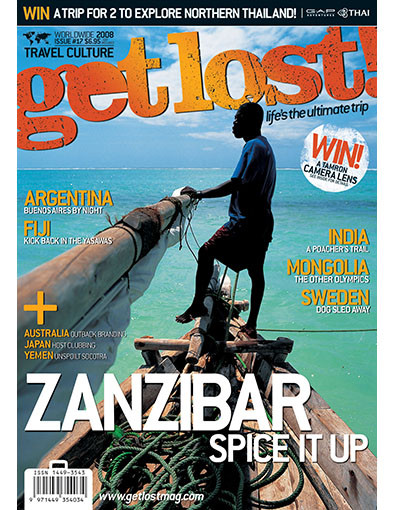 Thought cowboys only lived in the Wild West? Head to outback Australia and meet the fellas competing at the National Bronco Branding Championships. Make your way to Mongolia for the Naadam Festival, take a huskie ride in the middle of Sweden’s summer, meet the anti-poaching heroes of Kerala in India and wander through Stone Town in Zanzibar. Chow down in Papua New Guinea, discover the world’s coolest waterside bars, ride a time machine back to Nashville in the 70s and so much more. 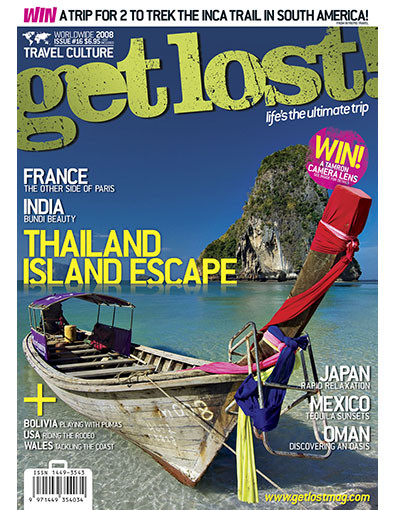 Pull on your boots and get ready to rodeo in issue 46. Then cruise the waters of Oman’s Musandam Peninsula and slosh through rapids on a trip to Japan that’s far from the bright lights of Tokyo. Ditch India’s tourist trail and explore Bundi, take to Thailand’s Koh Phangan on a moped and head due north in Australia. Share a tipple at sky-high bars around the world, discover what life’s like as a pro surfer, learn how to take cracking photos of urban settings and much, much more. 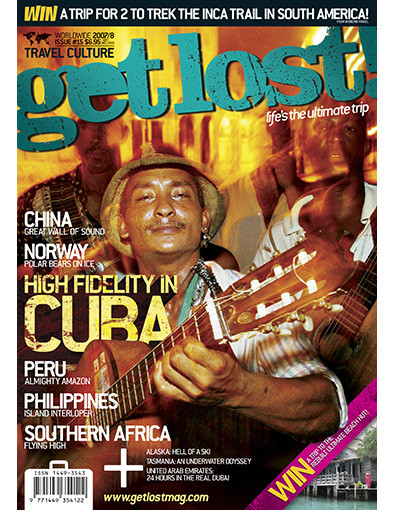 Get up high on a heli-skiing trip in Alaska then plunge down low on a dive into an underwater forest in Tasmania in issue 15. Next head to the sea for an icy adventure to Svalbard, where the summer sun never sets. Take a slow boat on Peru’s mighty Amazon River, experience and idyllic lifestyle in the Philippine archipelago, and contemplate life, post-Castro, in Cuba. Plus you’ll learn to take aerial snaps from our photography expert, scrape the surface of China’s underground music scene and so much more. 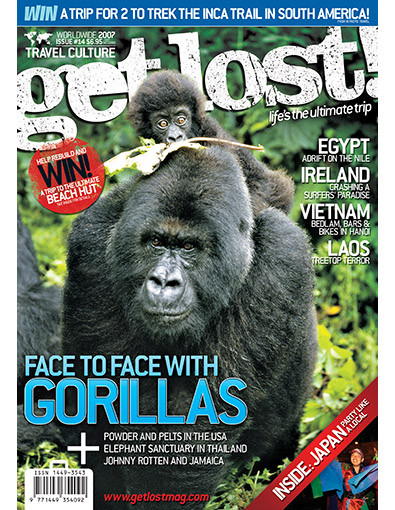 Love animals? In issue 14 we share some of the most touching encounters you’ll find anywhere on the planet. Bathe rescue elephants in Thailand, then come face to face with gorillas in Rwanda. Move from animal encounters to hanging with humans and discover the Hanoi of old and new, book in for a cheeky stay in a Taiwanese love hotel and head to the ice-cream sundae slopes of Jackson Hole. You’ll also eat your way through Germany, dive deep in a submarine escape training tank and a whole lot more. 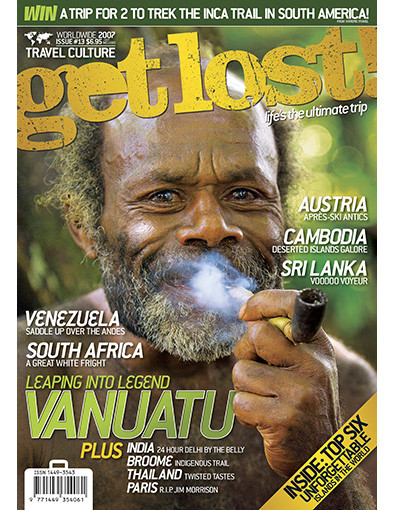 Imagine swapping your scientifically tested bungy rope for a vine. Even if you’d prefer to keep your feet squarely on the ground you’ll find this issue’s feature on the home of bungy jumping – remote Vanuatu – a fascinating read. Next, indulge in a day full of cardamom-spiced treats in Delhi, ride a motorcycle in far north Vietnam, go shark diving in South Africa and party on the slopes of Austria. Our photo guru will teach you how to play with light in your shots and we share the tale of how an American rock star’s grave became one of Paris’s most popular tourist attractions. 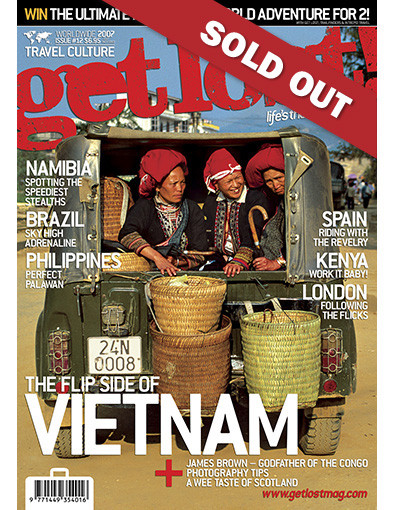 Make your way to Menorca for one of the Mediterranean’s liveliest festivals, explore the natural wonders of the Philippines and get up close and personal with cheetahs in Namibia. Then get your heart pounding on a fitness adventure in Kenya, hike Australia’s Lord Howe Island and delve into the world of London as seen on the big screen. Learn about James Brown, the soul king of the Congo, how light affects the colour of your photographs, where to find some of the world’s best bars, plus so much more. 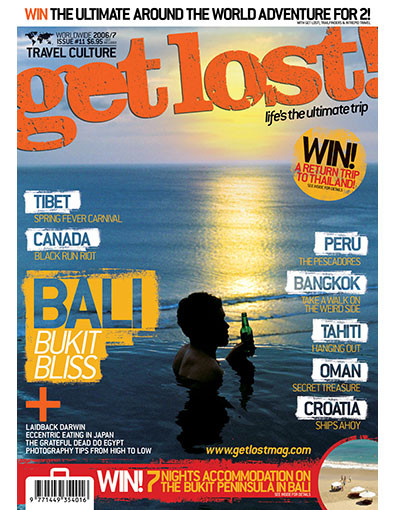 Fancy thundering down the slopes at Whistler? What about watching Peruvian fishermen working on curious reed boats? Or perhaps sailing Croatia or the Caribbean takes your fancy? There’s something for everyone in issue 11. Go rock climbing and clamber into caves in Arabia’s playground of Oman. Couch surf in Darwin, sample unusual food in Japan, spend a rather strange 24 hours in Bangkok, challenge your perspective of the world with a lesson from our photography expert Steve Davey and much, much more. 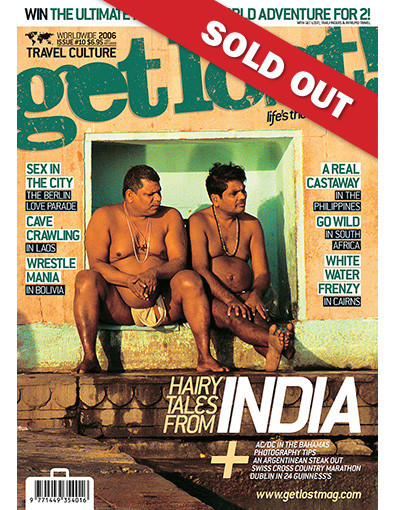 Feel the love in Berlin at the world’s biggest dance festival then jump on a motorbike and cruise off into rural Laos. Get in touch with your spiritually on a pilgrimage in India, or satisfy your sinful side at a wrestling match in La Paz, Bolivia. Fill your belly with Bolivian barbecue, imbibe at the world’s best bars and brush off the cobwebs on a ski marathon in Switzerland. Learn to capture a unique view of the world with our photo guru, meet the celebrated Australia film director Phil Noyce, plus much, much more.