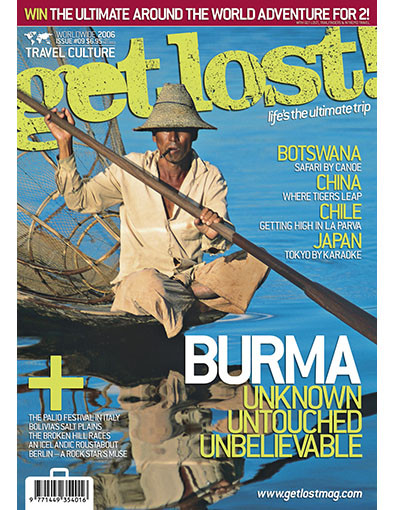 Head to outback Australia for the annual St Patrick’s Races and saddle up for a spot of sheep herding in the breathtaking highlands of Iceland. Go snowboarding in Chile and marvel at the salt plains in Bolivia. Then reset your watch to island time with a holiday in the Solomons. Plus, comedian Brad Oakes shares his cheeky cruising confessions, we look into a day in the life of a National Geographic television and film producer, and find out why West Berlin has inspired some of popular music’s most influential figures including David Bowie, Nick Cave and Iggy Pop. 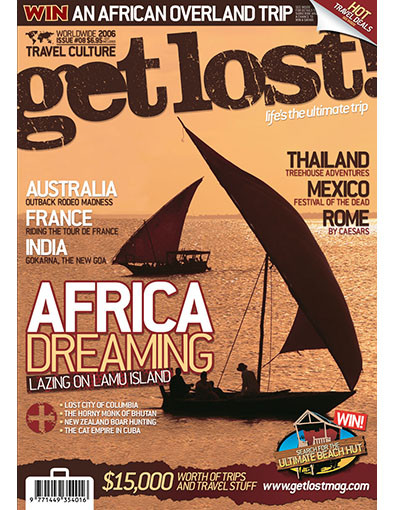 Get ready to rodeo in outback Australia in issue 8! Then grab a bike and test your skills on the open stage of the Tour de France, go wild boar hunting in New Zealand, trek through Thailand’s largest forest, and tighten your sandals to experience Rome on foot. Take a dhow and donkey to Lamu in southern Kenya, catch a train through China and set off deep into Colombia’s Sierra Nevada mountains. Plus, we share handy medical remedies for the road and teach you how to use filters to enhance your photographs. 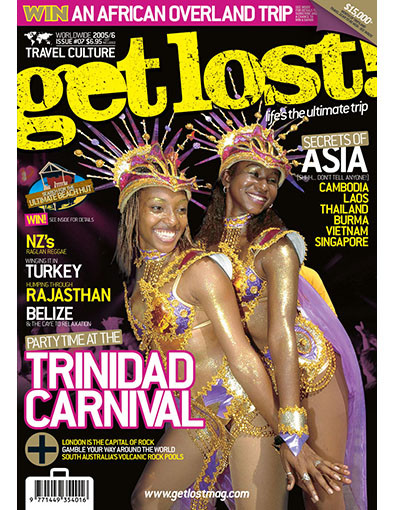 It’s time to party! Slap on metallic paint, don feathers and sequins and hit up Trinidad’s outrageous carnival. Then change the pace with a chilled-out trip to Raglan, New Zealand, delve into Borneo on a jungle adventure, paraglide in Turkey, traverse Rajasthan’s golden dunes and find out what to do with 24 hours in Tibet. Plus we share the confessions of a hiker, meet a former croupier who spent 17 years travelling to the world’s casinos and never lost a cent and much, much more. 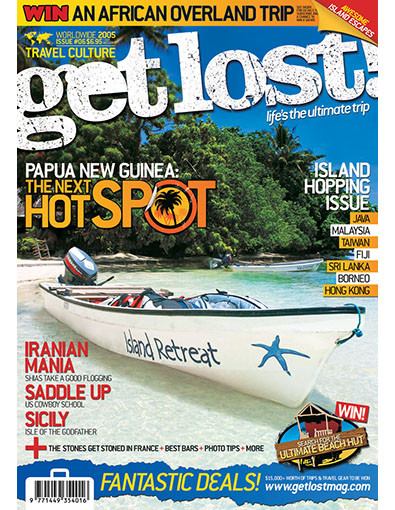 An island holiday. No other words have such strong sway over the imagination. Is it the azure seas, golden sands and idyllic palms, the isolation or just cheap beer and the beach party that we crave? Find your island adventure as we go hopping around the globe. Plus, we chow down on Australian bush tucker, saddle up for cowboy college in Arizona, share the lowdown on travel vaccinations, and show you how to a create mood in your travel photographs. 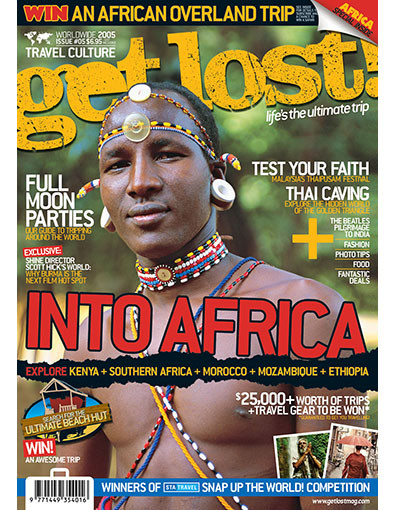 It’s time for Africa! In issue 5 we hit the road on this vast continent and meet the Masai in Kenya, thunder across the desert in Namibia, visit a hawker market in Morocco, find island paradise in Mozambique and learn of ancient history in Ethiopia. Next up, head to Thailand for its infamous full moon parties, paddle Tasmania for some of the world’s best whitewater river kayaking, and swot up on wilderness survival tips in Sweden. Wrap your mouth around cake and coffee in Austria plus much, much more. 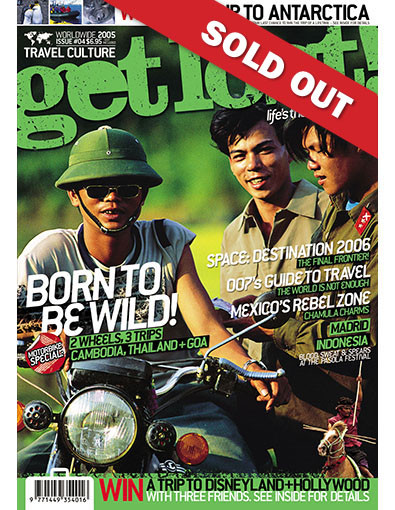 Feel adrenaline surge through you in a race along the best motorbike trails across Asia’s best motor bike trails in Thailand, Cambodia and Goa. Meet the descendants of Mayans in Mexico, devour tapas in Madrid, and discover the meaning behind tattoo artistry in Burma. You’ll also discover 007’s hottest filming locations around the world, slumber in a floating hotel in the pristine waters of Lombok, dive into the watery depths surrounding the 12 Apostles in Australia, plus so much more. 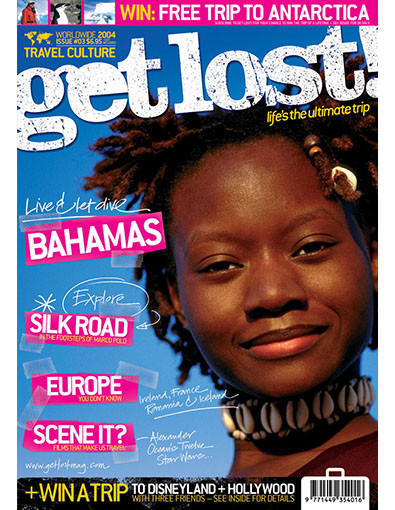 Think you’ve done Europe? Think again. In issue 3, you’ll uncover some of the best off-the-beaten-track destinations and adventures this cultural melting pot of a continent has to offer. Unravel the mysteries of Romania, meet cowboys in France’s Camargue, learn to spot elves in Iceland and revel in the craic among ancient stone structures in Ireland. You’ll also walk in the footsteps of Marco Polo on the Silk Road in China, dive into the pristine waters of the Bahamas, become a culinary master at a cooking class in India, plus so much more. 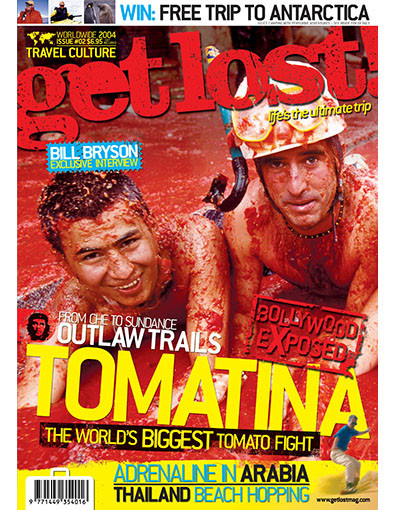 Lose yourself in the desert sands and ancient civilisations of Arabia in issue 2.  Speed down the sand dunes of Dubai, search for Alexander the Great’s burial place in Egypt, and explore Sana’a – one of the oldest cities in the world – in Yemen. Get all sauced up at the world’s biggest food fight, La Tomatina Festival in Spain, uncover the behemoth of Bollywood in Mumbai, saddle up and gallop off into the wild west of Bolivia, track polar bears in the Arctic Circle, plus so much more. 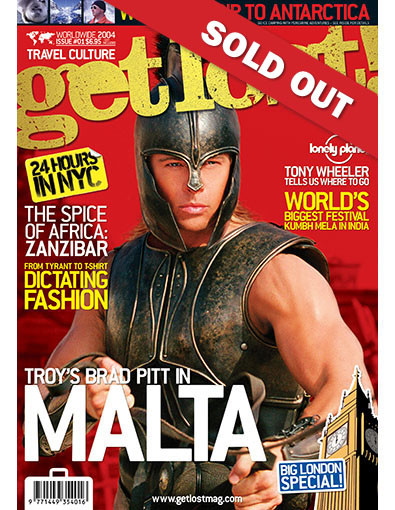 Ready to be inspired? Let your travel bug run wild with get lost’s very first issue. Uncover tips from Lonely Planet founder Tony Wheeler, discover sun and spice on the island of Zanzibar, get behind the scenes of Troy in Malta and embark on an expedition in Antarctica. You’ll also traverse the snowy wilderness with a band of huskies in Canada’s Yukon, uncover old world pubs and pageantry in London, discover the best of the city that never sleeps, New York, brave dizzying altitudes on a hike to the summit of Potosi in Bolivia, plus much, much more.