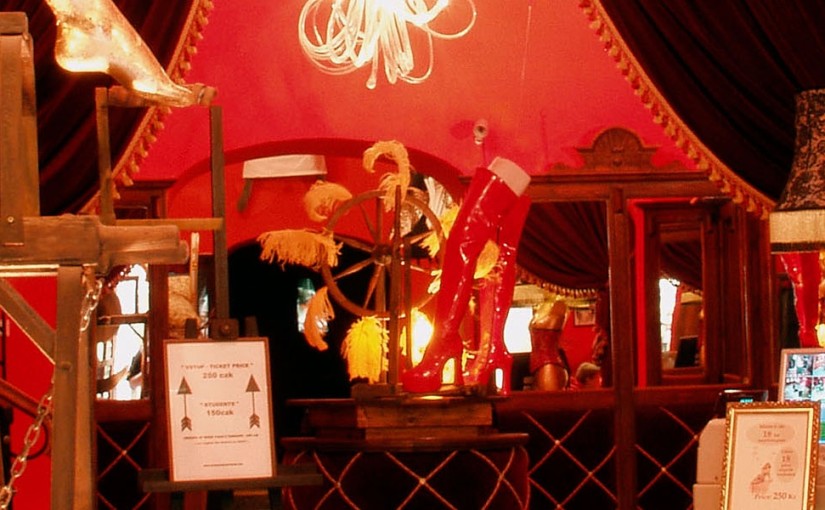 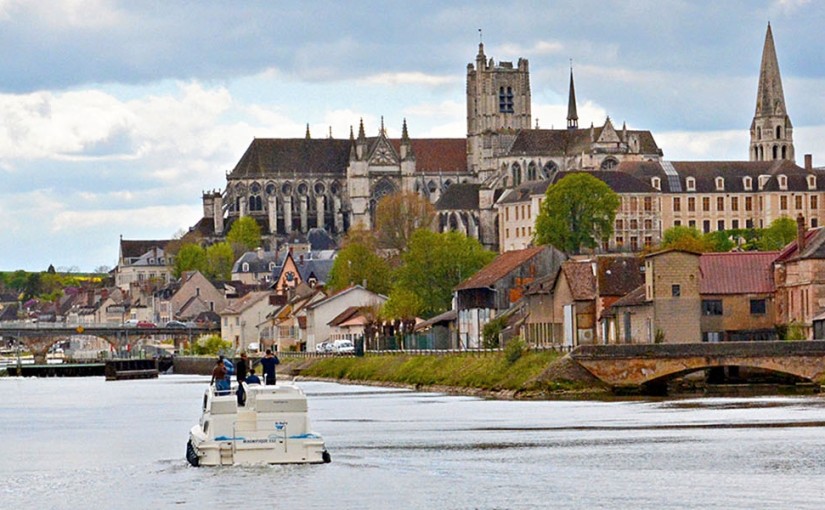 It was an accident, really. We didn’t mean to start knocking back sparkling wine in a hilltop cave at eight in the morning. Earlier, when George and I were cycling along the banks of a waterway heavy with morning mist, our declared mission was uncomplicated: ride around for a bit, find a village with a boulangerie, stock up on croissants and bread, return to le boat as le triumphant hunter-gatherers. Facile!

But when you wake up in a new place every morning and you don’t know the lay of the land, it’s an easy matter to get lost – especially here, in the Auxerrois, a province in the Burgundy region of central France, where apparently it’s simpler to stumble upon an immense subterranean cavern full of bubbly than it is to find a bakery.

We’re in the Caves Bailly Lapierre, which burrow into the hills above the riverside village of Saint-Bris-le-Vineux. Within its four-hectare labyrinth, the premium produce of 71 local vineyards is gathered together and sold in a front-of-cave tasting room.

To get here (after spying an intriguing looking riverbank sign, which curiosity refused to let us ignore) we climbed a vertiginous hill, cycled through a hole in the cliff face and pedalled several hundred metres through a gloomy tunnel, before emerging into a huge chamber lined with bottles. There, beneath a buxom vision of an effervescent wine angel sculpted into the stone ceiling, a bloke offered us a glass of Crémant, the speciality of the region.

You can’t argue with serendipity in such circumstances, and it would have been rude not to try a few sips of the local varietal; plus we needed to sate the thirst we’d earned by cycling up the hill. Even at this early hour we’re not alone. Some of our fellow early-bird tasters are spitting their wine out, but we wouldn’t dream of being so wasteful. By the third glass, our erstwhile quest has gone completely out of focus. 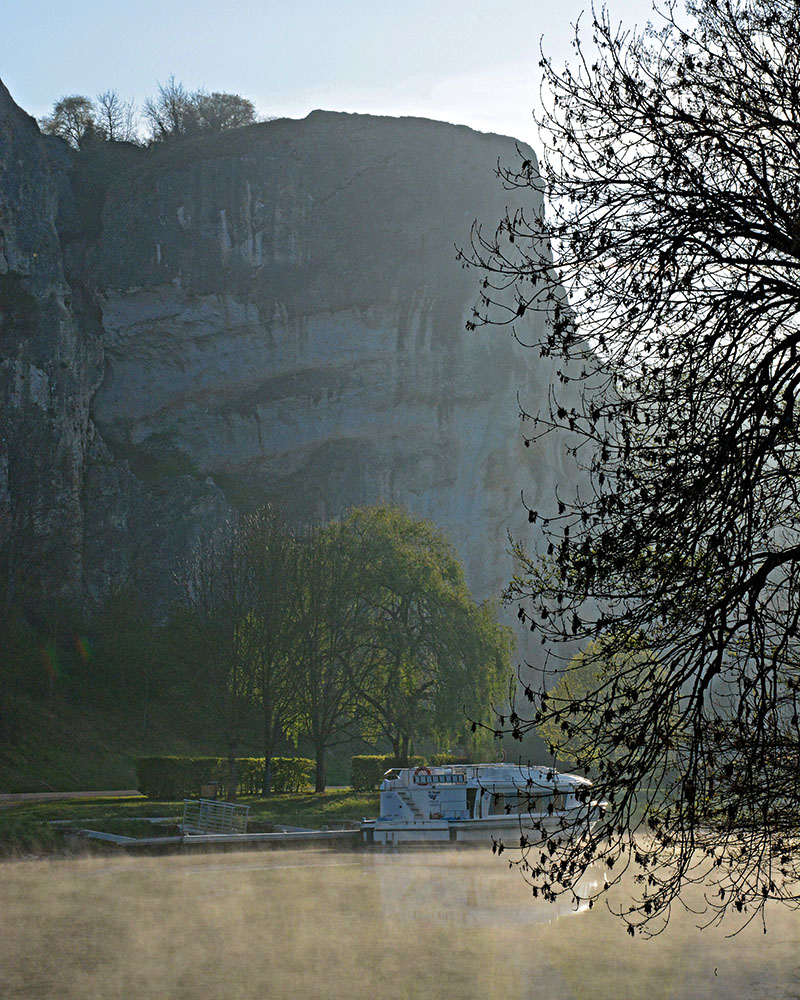 A misty morning at Le Saussois. Click to view gallery

It’s not until we get back in the saddle and wobble off down the hill, four bottles of Crémant Réserve clinking away in the breadless baskets of our bikes, that we realise a story is going to be required. Our crew has grown used to feasting on fresh bread for breakfast – we’ve been gone for hours and the bounty we’re returning with is not what they ordered. This could end in mutiny.

We’re deep into a self-sail boat trip along the Yonne river and Canal du Nivernais, twin – sometimes conjoined – waterways wending their way through the Bourgogne and forming an umbilicus between the Loire and Seine valleys. Things have been going smoothly so far, almost too smoothly – a revolution will liven things up nicely. So long as no one gets keelhauled or guillotined.

Potential insurgencies aside, this is slow travel at its best. It’s barefoot boating for those who want to explore the countryside, villages and vineyards of inland Europe, rather than the coast; a travel experience for people who love boats, but can’t bear the thought of being a passive passenger on a clinically planned cruise.

As captain of your own craft, you can choose your crew, explore at your own pace, stop as often or as little as you like, and there’s no need to unpack and repack gear at every port of call. It’s like having a floating campervan, except a whole lot cooler.

You have to stick to the canal while on the boat, obviously, but having a couple of bikes on board gives you the freedom to explore well beyond the banks. The horses that once hauled barges along this waterway have long since been put out to pasture, and the canal towpath now forms a perfect cycleway. To break up the pace – and burn off a few of the chocolate croissants we’ve been shoving in our cakeholes all week – we take turns to hop off with a bike at each stop, racing the boat to the next lock.

Beyond the odd burst of pedalling, though, it’s a seriously somnambulant sojourn. As we cruise along the river, gliding lazily through the bucolic heart of rural France, the canal is fantastically fringed by the near-neon-yellow glare of almost endless fields of rapeseed plants, so bright you need sunglasses to behold them. The smell of ripening flowers hangs heavy in the air, as does the bouquet of the gloriously busy cheese plate we bust out every lunchtime. Periodically a château punctuates the scene, and at each town and village along the way we abandon ship to look around, replenish the ship’s wine cellar and stock the beer fridge with Kronenbourg.

Occasionally, a bit of concentration is required. We’re in one of the largest craft in the Le Boat fleet, a Vision3, which boasts three double rooms, a galley/living area and a huge top deck. One downside of having the biggest boat on the moat, however, is that while it’s lovely and spacious on the inside, things can get a bit squeezy when you’re trying to negotiate some of the tighter sections of the canal. Built back in 1784, the waterway is designed for proper canal boats powered by proud horses, not flashy cruisers driven by hapless donkeys.

Initially it was terrifying. When Dominic, the depot’s grand fromage, first suggested I take the wheel outside the boathouse in Migennes, I felt like I was manoeuvring a road train around a playground. The local fishermen seemed to share my nervousness. My schoolboy French isn’t the best, but I’m pretty sure the angler on the far bank wasn’t wishing us bon voyage when he started jumping up and down and yelling.

“If you need to warn someone that you’re approaching, sound the trumpet,” Dominic sagely suggested, pointing to a button picturing a horn. We’ll be the Louis Armstrongs of the canal by the end of this, I thought, as he hopped off and left us in charge.

The Canal du Nivernais has 110 locks, and by the time we’d gone through the first two without anyone dying and the boat still afloat, our nerves had settled somewhat. Other people helped too, especially the crew of flag-waving Kiwis who forced past us then promptly got themselves into an almighty tangle in the next lock – they made us feel like seasoned sailors.

Admittedly, the Vision is armed with side-thrusters, which make positioning the boat remarkably easy, but while getting into locks is one thing limboing under eighteenth-century bridges in the river version of the QE2 is another matter altogether.

“Your glass of wine, that will be OK,” Dominic explained, before letting us loose. “But the bottle, well, you might need to move that off the table when you pass under the lowest of the bridges.”

We assumed he was joking, but no, they really are that tight – as my wife discovered when she escaped a beheading by mere millimetres while unwittingly climbing the stairs to the top deck just as we passed under a particularly low bridge. I shouted a warning just in time, mercifully (she was bringing me a cold Kronenbourg after all).

During our week-long expedition through the Yonne Valley, we pass the glorious green embrace of the Morvan, a beautiful expanse of wild woods, where tracks and trails spider off in various directions, most of them eventually leading to hilltop hamlets. Cycling along one of these trails one morning I almost crash headlong into a wild deer.

There’s a slight 28 Days Later feel to some of the medieval villages we discover while exploring. Mailly-le-Château, for instance, is a quiet and eerie eyrie, where the streets are almost surreally tidy, the gardens well tended and everything is in its right place, yet the streets are spookily empty. Zombie apocalypse or not, there’s almost always a cracking boulangerie in these places, but who they sell their magnificent bread and cakes to when we don’t happen to chance by, I’ve no idea.

Far more vibrant are the two bigger towns we pass through, Auxerre and Clamecy. The spire of Saint-Étienne Cathedral, visible from several river bends back, announced our imminent arrival in Auxerre on the second day. The lively town revolves around this edifice, parts of which date back to the eleventh century. We moor right next to a little plaza that leads straight to its enormous doors – more central accommodation it would be impossible to find.

The town is busy with bustling restaurants, bars, cafes, shops and tabacs, but we don’t hear a single non-French voice while exploring the streets. Besides the Kiwis, we appear to be the only blow-ins. It’s hard to discern whether this is because it’s early in the season or if this part of France is just well off the tourist map.

While the villages of the Bourgogne are quiet, the locks along the canal are social hubs for boaters. Even now, during the quiet kick-off to the season, it’s common for lock keepers to squeeze two or three boats into each lock. As you stand on deck with a rope in your hand, ready to brace against the buffeting onrush of water, conversations flow between craft.

It transpires that many of our canal-cruising comrades own their boats and live the life aquatic almost full time. A few are French, but others have transported their barges and river cruisers from the UK or elsewhere. Some of these waterborne wanderers are on epic voyages, linking together canals and rivers to traverse large swathes of Europe. 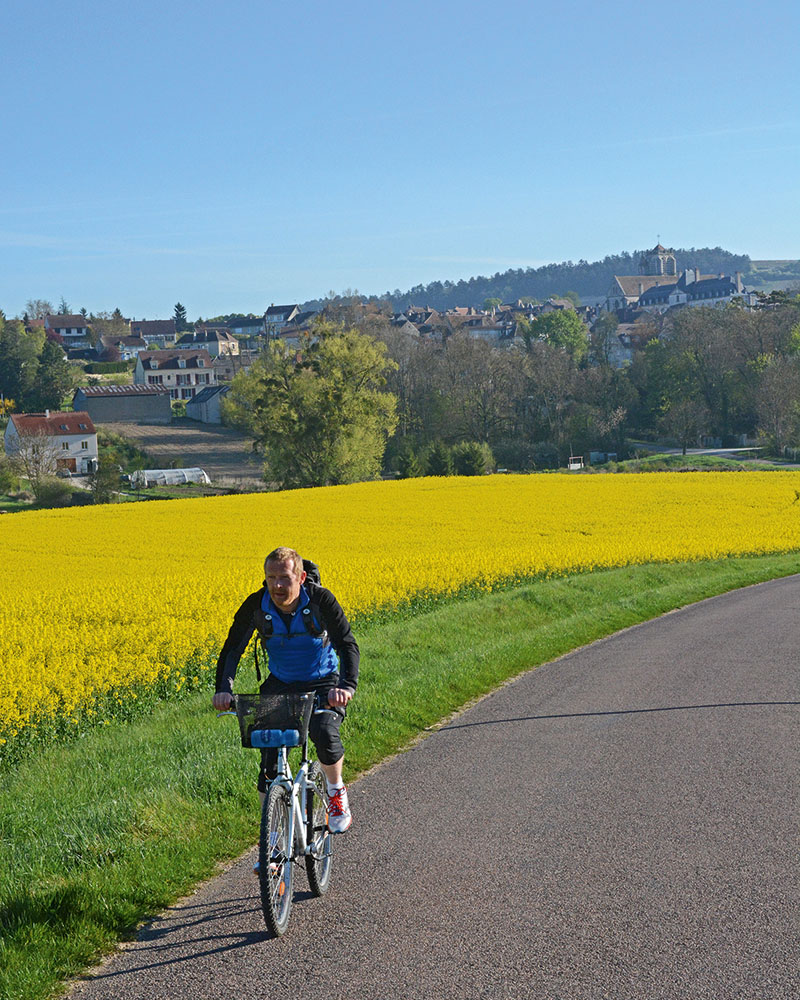 Cycling through fields of rapeseed. Click to view gallery

Intrigued, I do a bit of research (our flashpacking boat has wi-fi) and discover you can take a canal boat a bloody long way if you put your mind to it. Some people have attempted trips from Paris to Moscow, even continuing up to Arkhangelsk on the shores of the White Sea in Russia’s north.

There’s a whole nomadic canal-boat counterculture here I never knew existed. It’s an idea to file in my to-do-when-I-retire-loaded list, but for now I’ll be happy to make it to Tannay in one piece. Tomorrow we’ve got a shindig planned in Clamecy, our last stop before relinquishing the Vision. But first we have to face the hungry hordes waiting back on the boat.

“I think there is some brioche left over from yesterday in one of the cupboards,” says George, grasping at straws as we swoop down the hill and away from the vino cave.

Perfect. The people have no bread? Well, let them eat cake. That line worked out a treat for the last person who tried it around here. Marie Antoinette got the chop for her bourgeois indifference to poverty when this canal was just nine years old.

Ah well, if we’re going to get it in the neck, at least we’ve been anesthetised with the world’s best Crémant.

Europeans love to bag Belgium, insinuating that the country offers little but mayonnaise on fries. And while this is a brilliant food combo, the country has much more going for it than its ‘boring’ reputation suggests.

On the surface, Belgium is a country divided, both regionally and linguistically. Years of tense debate and power struggles between the Flemish and French communities have left the nation with a confused identity. But look a little closer and you’ll realise each city and village tells its own story with a unique narrative and voice.

The port city of Antwerp is the cultural hub of Belgium and home to the prestigious fashion museum MoMu. The city is also famous for its diamond trade and literary community. Bruges is a fairytale wonderland on water, and Brussels, despite an austere façade, has a raging cafe and bar scene. Dive in and discover Belgium’s depths.