about Bosnia and Herzegovina

Psst, want to know a secret? You should head to B&H and do it quickly. For a country whose size is dwarfed by Tassie’s there’s plenty to check out. And people are finding out about it – especially Europeans. It’s one of the most-visited countries in the Balkan region and is expected to see a record growth in visitor numbers before 2020 rolls around.

Despite being heavily damaged during the Bosnian War of the 1990s, Sarajevo remains incredibly beautiful. Parts of its Old Town, with their Ottoman architecture, feel a little like Istanbul, while some Austro-Hungarian buildings have been restored to their former glory. While you’re walking through the streets, look down to find Sarajevo roses. Small craters left by shells have been filled with red paint to honour the lives taken.

Daredevils tend to stick Mostar on their itineraries so they can leap off the elegant Stari Most (Old Bridge), but the Old City, listed by UNESCO, has an intriguing mix of influences. Climb the the stairs to the top of the minaret in the Kossi Mehmed Pasa Mosque for a superb view of the bridge and Old Town. It’s worth heading 40 kilometres out of town, too, to see the stunning cascades of the Kravice waterfalls.

Set your sights out of the city to discover a growing force in ecotourism. The alps here are pristine and the perfect spot for hikers and mountain bikers. Whitewater rafters are in for a treat, too. It’s a popular pastime in Bosnia and the Tara River Canyon is the deepest river canyon in Europe.

Explore Bosnia and Herzegovina By

For television producer Frank Bruzzese working with Australia's Hamish and Andy was an opportunity to see the world. 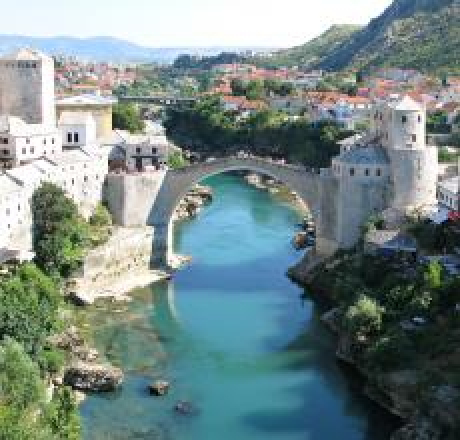 Free falling with cables and parachutes is for wimps. Take the 24-metre...