It’s certainly not one of Africa’s big drawcards, but this small landlocked country in the continent’s northwest is one for the curious. There are just four national parks, but you’ll find one of the largest elephant populations in west Africa here, alongside lions, leopards, buffalo, cheetahs and the endangered African wild dog. And, with just 600 metres of elevation separating its highest and lowest terrain, it’s all about the plains.

The largest cities have amazing mouthfuls for names: Ouagadougou (known as Ouaga) is the capital and Bobo-Dioulasso (not surprisingly, most call it Bobo) is the second largest city, even though it has a bit of a small town vibe. Neither is big on sights, as such, but in Ouaga you’ll be surprised by the great music, bustling markets and the opportunity to shake your thang to local bands at places like Petit Bazar. In Bobo, head to the Grand Marché – like the name suggests, it's a big market selling everything from produce to local fabric – and the amazing Grand Mosquée, built in the 1880s and an impressive example of Sudano-Sahelian architecture (rounded forms made from mud with sticks protruding from the walls).

Infrastructure for travellers is limited, but with a good sense of adventure and the ability to go with the flow, you’ll be rewarded by a country visited by few but where the welcome is always warm. 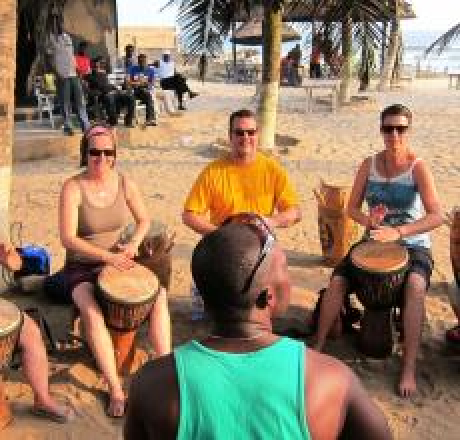 Pulse through the musical meccas of Burkina Faso and Ghana in a toe-tapping,...

Pulse through the musical meccas of Burkina Faso and Ghana in a toe-tapping, hip-swaying...