Huge steps have been taken to preserve the outstanding natural resources of this equatorial African nation. Rainforest covers about 80 per cent of its land mass, and, in 2002, former president Omar Bongo Ondimba set aside about 10 per cent of the entire country to national parks.

The best known of those is Loango with its surfing hippos and elephants grazing by crashing waves. Humpback whales splash off the shore on their migration (mid-July to mid-September).

Pirogue (canoe) trips up the Ivindo River take travellers into a land of heavy forest and waterfalls. In the trees above, you’ll catch glimpses of monkeys and African grey parrots, while hippos are resident in the water. Ivindo National Park is also home to Langoué Bai, a forest clearing discovered by Mike Fay in 2000, where there’s a research centre to track the animals – elephants and gorillas among them – lured by the rich food in the area.

There are large populations of gorillas and chimpanzees in the Lopé National Park, but for wildlife lovers this is also where you can find the world’s largest gathering of primates – about 1350 mandrills hang out together here in the dry season from July to August. Hornbills and forest kingfishers can also be spotted in the trees.

Libreville (named thus for the freed slaves who built it), stretched along the northwest coastline, is the country’s only city. Gabon is flush with money from oil, and this town is neat, trim and tidy, unlike almost all of the rest of Africa. For a true taste of the continent, head to Mont-Bouët market or to L’Odika, a popular restaurant in the Quartier Louis that serves French-African fusion dishes. 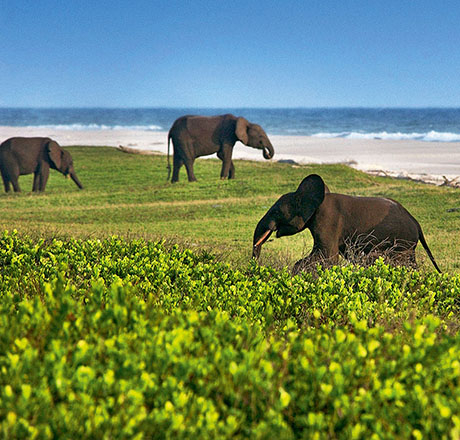