Where else would you find a city called Merv, which was once considered the ‘Queen of Cities’ worldwide, and the second most important in Islam. Now, it’s an awesome introduction to the archaeological ruins, culture and secrets of the ancient Silk Road, where exotic silks and spices, tea and gold where carted from the east to the west.

A member of the ‘stan’ community of Central Asian countries (the suffix means ‘land of’), among them Uzbekistan, Tajikistan, Afghanistan and Kazakhstan, the country is almost covered by the Karakum Desert (it takes up more than 80 per cent of the land) with the Caspian Sea forming its western edge. Everyone from the Mongols to Alexander the Great and the USSR has ruled the region and left an indelible mark on the people and landscape.

It may not be five-star, but what it lacks in material creature comforts Turkmenistan almost makes up for with a millennia of history. It’s probable this nation isn’t at the top of (or even on) your bucket list, since it still suffers from the excesses of its former leader President for Life Saparmurat Niyazov, even though he died in 2006. You still can’t, for instance, play video games or have long hair if you’re a man. It’s only really possible to travel here as part of a guided tour, and you’ll be watched diligently by military personnel and the police. 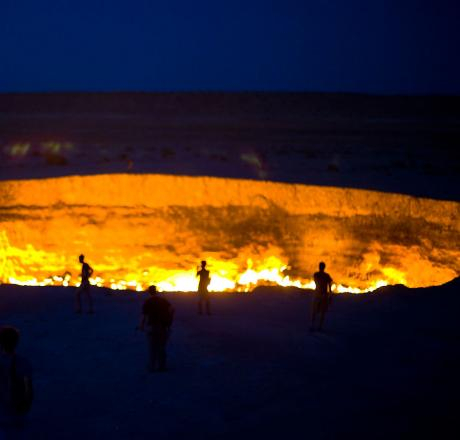 Flames flare across a pit of boiling mud in the heart of Turkmenistan’s...

Flames flare across a pit of boiling mud in the heart of Turkmenistan’s Karakum Desert....