For decades it was relegated to the international sidelines, but visit Cuba now while its true heart still beats. And there’s no better time to get out and about in its capital than after the sun sets.

Crumbling colonial buildings and beaten-up Chevrolets. Cigar vendors and nighthawks strolling around Habana Vieja (Old Havana), bottles of beer in hand. Tourists eating smoked corn on the cob while gawping as Havana’s vintage taxis drive by at a decades-old speed.

And music… There is music everywhere. The marriage of Afro beats and Spanish melodies is heard in restaurants, hotels, clubs and through the loudspeakers on the shoulders of men hauling them around.

Communism, locals and tourists say, is the perfect breeding ground for art. “Why become a doctor when I can make the same money as an artist and have more fun?” a musician asks. In the Cuban capital, the weekend starts on Thursday. At night people don’t just stand, they dance. Habaneros may still not have much in the way of material comfort, but they do know how to shimmy and whoop it up from the afternoon till the early morning. 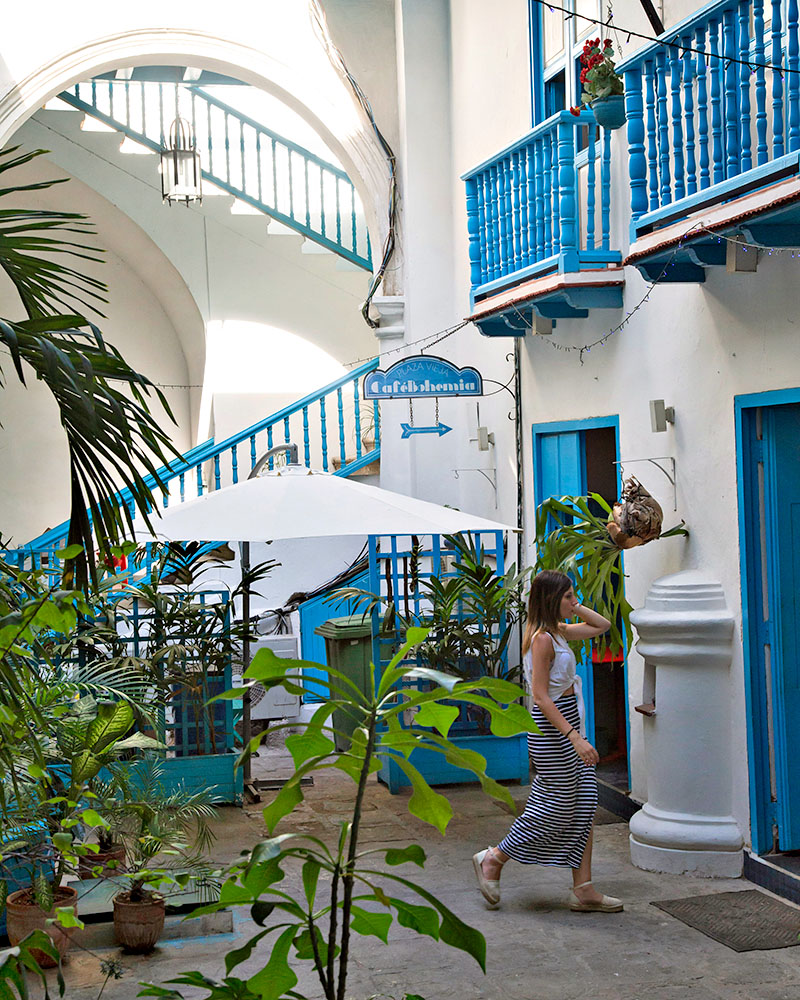 4.30pm
Sinking your teeth into a lemon cake or slurping on large scoops of gelato in Cafe Bohemia’s sizeable courtyard – it opens up to the sixteenth-century La Plaza Vieja – is a beloved pastime. The owners of the cafe are Cuban and Italian with an interesting past. Manager Annalisa Gallina followed her brother (and the cafe’s owner) to Havana after her Cuban sister-in-law predicted “Habana Vieja’s future is pink”. Staff members at the bi-cultural cafe, which is loyal to its Mediterranean roots, bake the bread it uses for its acclaimed sandwiches and rely only on local, organic and seasonal produce. 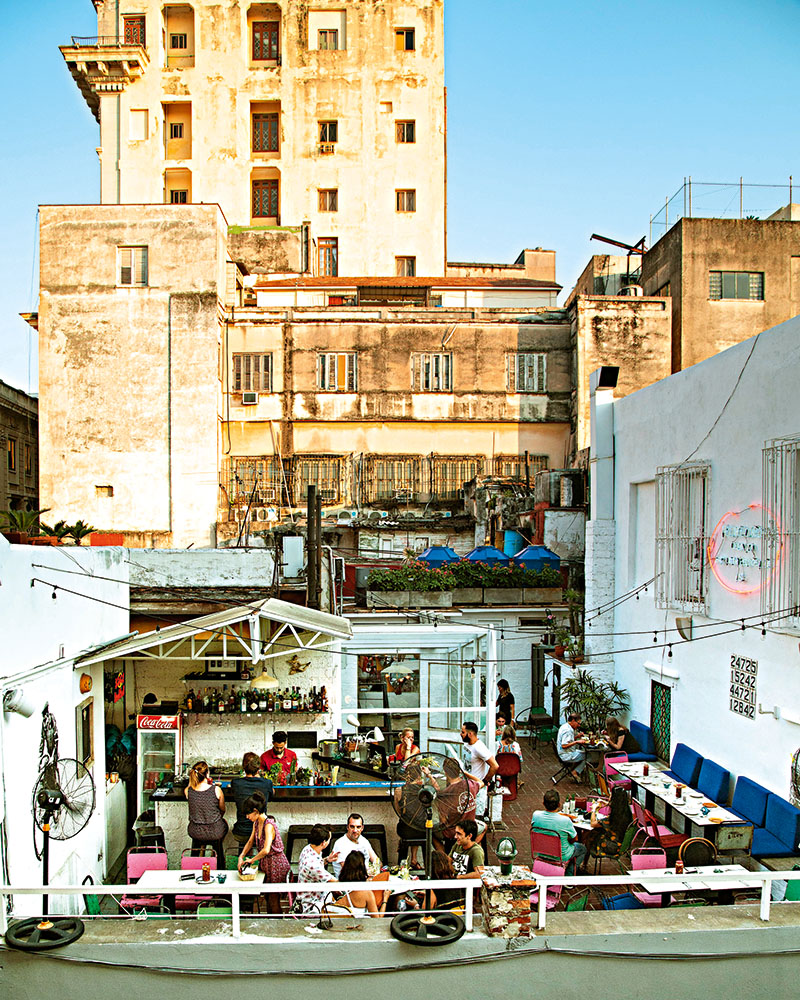 5pm
Cuba is the birthplace of the classic rum-based cocktails, mojitos and daiquiris (although the Puerto Ricans might have something to say about the origins of the former), but at restaurant/bar El del Frente it’s reinvented gin cocktails that are on a different level. “You should try this – it’s really good!” exclaims one patron. She is pointing to an Emilito, a riff on a pina colada made with gin and sprinkled with chilli. The bartender proposes a Michelada, which is a concoction of tomato, chilli, pickles and other “secret ingredients”. There are hot daiquiris, too, made with gin, pepper mango and cashews. Best of all, you can savour all these at the rooftop bar. Just head to the top of the stairs, where you’ll pass a poster of the late Princess Diana.

6pm
In the 1950s, a number of young Cubans decided that instead of performing salsa in a typical back-and-forth motion, they would spin each other round in a rotating fashion. And so Cuban salsa was born. This idiosyncratic dance has been demonstrated at a cosy, rustic restaurant called La Reliquia for a few years now. You can feast on Cuban dishes like the lamb roja vieja then take free salsa lessons from Randy, who also manages the place. “My mum taught me how to dance the salsa,” he says. “That’s how Cubans learn to dance.”

7pm
The Malecón is an eight-kilometre esplanade that encompasses a six-lane roadway, seawall and extensive footpath, all running along the Havana coast. Stretching through the colonial centre of Old Havana to the Vedado neighbourhood, the Malecón is the sort of place you’ll find people strolling, jogging, fishing, tanning or just daydreaming while devouring the infinite azure of the Caribbean Sea. Whatever you decide to do – although a stroll is highly recommended – the Fellini-esque assortment of street vendors will interrupt your bliss. Young men will attempt to sell you planchao (rum), chicharitas platano (banana chips) and granisado (ice with sweet syrup), while women will try to lure you with flowers and teddy bears. “Don’t forget to visit the plaza,” says Isangel, a young man, who – no doubt – often visits the Malecón in pursuit of romantic encounters. It’s at its best as the sun is falling below the horizon, colouring the waves of Havana Bay rich shades of gold and orange.

8pm
Privately owned paladares (restaurants) were once illegal in Cuba – today they are not only allowed but increasingly popular, too. Imagine eating grilled fish or Caribbean prawn casserole in a room where Barack Obama, Mick Jagger and Beyoncé have all dined. In 2010, the owner of San Cristóbal, Carlos Cristóbal Márquez Valdés, decided to transform the century-old house he’d inherited from his grandmother into a restaurant, and was delighted to greet the Spanish ambassador as his first client. Such is Valdés’ fascination with VIPs, his paladar has both an Obama table and a Jesus table (we’re fairly sure he never dined there, but the table is located near his statue). Don’t be surprised if you find yourself accepting the offer of a cigar and 15-year-old rum from a smiling waiter at the end of your meal.

9.30pm
In the business district of Vedado, don’t be surprised if you’re met by a seemingly endless queue. “The place to be,” says one local. “Todos los artes in el mismo espacio,” she continues, having switched to Spanish. She’s saying how all art is assembled in one space at FAC (Fábrica de Arte). This building has been turned into a modern creative labyrinth separated into five areas, some exhibiting fine arts and jewellery while others host fashion shows and live music. There’s always something on, but all the events are listed on the website’s calendar.

11.30pm
Cuban trovadores (itinerant musicians) have relied on their guitars and artistic sensitivity to deliver emotion-charged tunes since the mid-1800s. To see their modern counterparts play, head to La Bombilla Verde. In a darkened, austere apartment with a small bar and terrace, aspiring musicians from across the country serenade guests enjoying tapas and well-priced cocktails. The players like to share with the audience the story behind the songs between melodies, somehow making the experience seem more like a reunion between old friends than a performance.

1am
Fans of the dark and decadent should consider themselves lucky if they get to experience what Habaneros say is the city’s best-kept secret. They call it Elegguá, but most travellers know the same place as the Conga Room. It’s what you might label an underground venue, except that it’s located on the first floor of a residential building. To gain entry, you’ll need to acquire a flyer on the street – although the few people handing out these cherished pieces of paper are rather selective. The prize should you receive one? Rumberos with machetes and knives who will transport you to the depths of the Santería religion and Afro-Cuban folklore. Worry not: you will survive.

There’s no easy way to get to Cuba from Australia, and most travellers go via the US and Mexico. United Airways flies direct from Sydney to San Francisco with onward connections to Mexico City. Aeromexico has direct flights between Mexico City and Havana.
united.com
aeromexico.com

For more information about travelling in Cuba, go to the country’s official tourism website.
cubatravel.cu 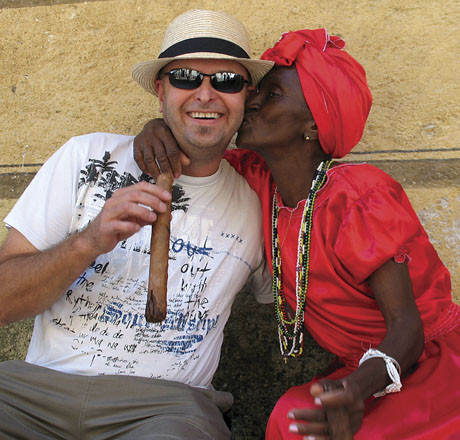 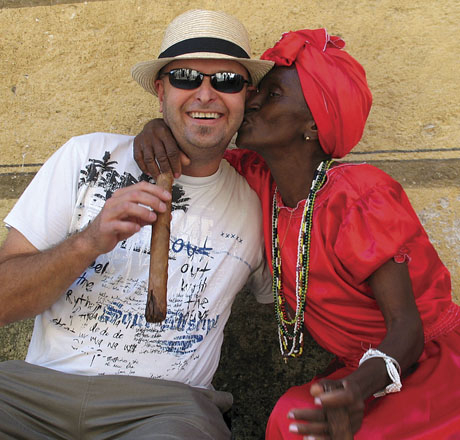