On a bike trip from Istanbul to Kazakhstan, Zand Martin finds himself laid up with an injury and playing board games under the watchful eye of Iosif himself.

All we have left for the morning fire is bark and Turkish newspapers flecked with candle wax and mutton grease. We’re in a six square metre cabin on the east side of the Rikoti Pass, just upslope from Surami, Georgia. Two days ago, we were admiring palm trees on the Black Sea coast, but here it’s cold. Snow fell overnight. Loading up the bikes, I hobble back inside for the last set of bags and the canvas backgammon board still spread on the table.

“How’s the Achilles?” John asks. My eyebrows arch and I shake my head: “Not great.” His sprained ankle is on the mend, but my tendons are getting worse.

Last night, two round women wrapped in tattered shawls and scarves had motioned us into the cabin, bustling about with kindling as they closed down their roadside soup dispensary. This morning, the Likhi Range is hung with cloud, and smoke sits on the ground and weaves into the forest. Just down from the cabin, we pause in the yard of the Kvirackhovlobis Church. I stretch, shiver and grimace. Wind plays on a twisted hornbeam nearby, swinging a green-black copper bell hung on jute.

We stop in Gori for lunch: khachapuri and khinkali, cheese bread and meat dumplings. Stalin was born here. Georgia is one of the few places still proud of the man, and a museum about his life flanks the square. A giant bronze statue of him once stood outside, but in 2010 it was removed in the dead of night by a government looking to Westernise. We stretch awkwardly in the warm cafe, plotting our escape. The pain  is getting worse and I know I shouldn’t push on to Tbilisi, so instead we head for the train station. 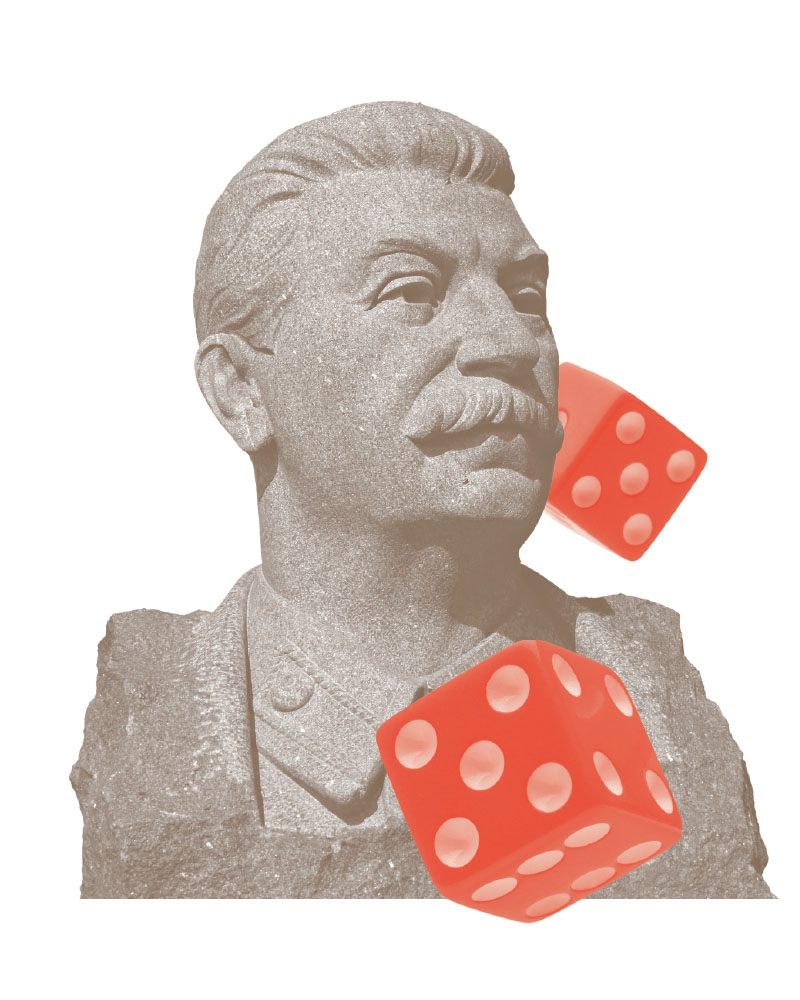 Two old men play in the shelter of a collapsing bus stop; the crack of wooden pieces on a wooden board and the tinkle of tiny dice compete with the howling wind. We pass them, and wheel our bikes into the Gori train station, dodging puddles in the dim, faded entry hall. Parcels tied with plastic twine line one wall, and a few solitary mounds of fabric indicate pensioners queuing for sport. A disc of plaster lets go, sending a wet comet to the floor and leaving drifting particles in its wake. A short woman in technicolour robes emerges with broom and bucket to clean up the mess, the latest attempt in her comic quest to keep the ceiling off the floor.

We buy tickets to Tbilisi by drawing a picture of a train, clock and bicycle and settle in to wait. There is no lighting or heat, and the cheap concrete seems to soak up any ambient warmth, leaving a damp chill to settle over the waiting passengers. We set to playing with gloved hands, matching the rhythm of the men outside. I win once, and John three times before we notice the two-and-a-half-metre statue of Stalin staring at us from the next room. He has been hiding here where no tourist will find him, while everywhere else in the old empire his likeness has been torn down. We play for six hours, freezing, reading when we get bored then starting up again under his marble gaze.

One of the old ladies strides up to us, pulling our tickets from our hands and shouting. We carry our gear across the tracks to the far platform and wait. A minute later, an hour late, a train appears and begins to slow. We prepare for a fight to get our bikes on board, but it doesn’t stop. The train blasts its horn and sails past the platform, casting on us rows of glassed, curious eyes. In Georgia, we are told, getting on a train is more like hailing a taxi. We trade tickets for a fist full of lari, minus a fee, and exit to the street. The players have packed up and gone home.

“To Tbilisi?” comes a shout from an idling car. At our nod, the driver reaches out and puts a magnetic cone on his roof. His name is Boris, and he’ll do it for 80 lari (about AU$50). He taps the homemade rack on his Lada and smiles a ruin of gold teeth. We pile in and he hands us apples, shining red in startling contrast to the muted tones of the station. We set off, stopping only so we can buy the tank of natural gas needed to make it to the capital.

Explorer Zand Martin hasn’t had a permanent address in more than six years. His expeditions include a 20,000 kilometre journey by bike and canoe around the world. You can read about his adventures at zandmartin.com. 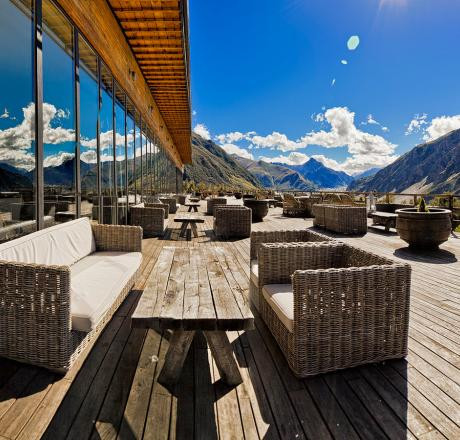 The brutal architecture of Rooms Hotel Kazbegi leaves no doubt... 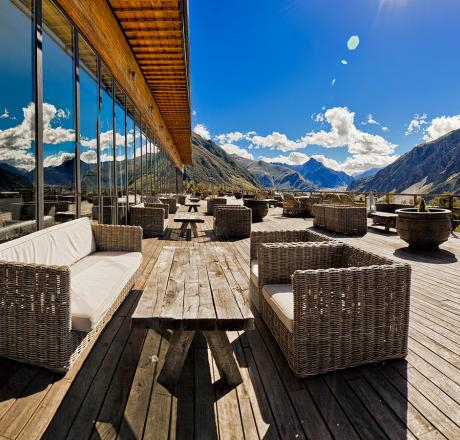 The brutal architecture of Rooms Hotel Kazbegi leaves no doubt as to its...