Bring Out Your Dead

Bring Out Your Dead

In the tiny Guatemalan village of Sumpango, the dead are honoured by a sky filled with giant kites. Flash Parker flies a tiny offering in memory of a much-loved aunt.

The halcyon days of my youth are locked in a trunk in my memory’s attic, a little like the journals filled with old family photographs stashed at home. As I get older I find myself flipping through those journals more and more, especially as work takes me further away from family for extended periods of time.

I clung to my youth for 30 years, but when cold-hearted Time suddenly and without warning took away my Aunt Linda in the spring, I was faced with the grim realities of adulthood: we grow up, we grow old and we die. My aunt and I were close. She was one of the most supportive and encouraging people I’ve ever known, and liked to crow to her friends that she kick-started my career when, on my seventeenth birthday, she gave me my first film camera.

The last time Linda and I spoke was shortly after Halloween. I was on assignment in South America, deep in the heart of a place wildly foreign to the rest of my family, but my aunt knew her way around a map. “Are you in one of those countries that paint the skulls?” she asked. I told her the big Day of the Dead festivals were held in Mexico and Guatemala. “I’ve heard of the Día de los Muertos,” she said. “Guatemala is the one with the Festival of Giant Kites, which locals use to communicate with the dead. Can you imagine what they’re saying?” At the time I couldn’t, and it took some time to muster the courage to visit Guatemala with my own farewell message.

On 31 October, Antigua’s cobbled streets heave in festive anticipation. Ladies in variegated outfits dress their tostadas in purple cabbage skirts, the canary-coloured church of La Merced proudly sports a garland of freshly cut flowers, while young folks dressed like Miley Cyrus cram into tuk-tuks with fireworks and bottles of Ron Zacapa under their arms. Antigua’s elderly Baroque bones love an old-fashioned shake and rattle, but I’ve come for something more subdued. I cross Plaza Union and pause for a moment to embrace the beauty of the ruins of the Santa Clara Convent and buy a small paper kite from a street vendor, before pushing back through time across the great wooden threshold at Casa Palopo Antigua, an immaculately restored colonial home that only betrays the calendar by displaying dates on the bottles of rum in the bar. I’ve accepted an invitation to a dinner party hosted by chef Mirciny Moliviatis that promises to explore themes of family and tradition.

Chef Moliviatis’s molecular gastronomic genius brings to life the capricious cuisine of her childhood. Her deconstructed sopa de frijol (black bean soup) and whimsical popcorn pork rinds are playful nods to her grandmother’s home cooking, and remind me of the times I used to sneak into the kitchen during the holidays to watch my mum, aunt and grandmother spin their Austrian magic. Adventure comes to the table disguised as fiambre, a traditional Guatemalan salad made using more than 50 ingredients and served as a precursor to the Day of the Dead festivities. I consume the blood sausage and olives with abandon, but high step over the brussels sprouts. Dinner guests go around the long wooden table telling stories of their favourite childhood meal, each of us spending a few moments raising a glass to someone we’ve lost.

Every 1 November, Sumpango, an otherwise sleepy village in the Sacatepéquez district, welcomes more than 10,000 revellers keen on communicating with the dead during the Feria del Barriletes Gigantes, or the Festival of Giant Kite. I’ve made the short trip from Antigua, but as I stare out over the dusty soccer pitch crowded with giant kites, I feel as though my little medium, less than a metre wide, may be an inadequate messenger. Some of the intricately designed tissue-paper giants, adorned with Mayan cosmological icons, stand 20 metres tall and require the strength of a dozen people to heft their creaky bamboo skeletons into the air, where sheer force of spirit keeps them aloft. When these giants do fly, they carry the tidings of the entire town with them. I’m not quite ready to fly my kite, so I wander. I visit half a dozen food stalls, sip on chicha de hora (fermented corn beer), and dress my kite with paper-thin accents before descending into the busy graveyard, where children flit among the headstones in an effort to elevate their own tiny kites.

Jubilation hangs in the air, which is not what I would have expected from a graveyard packed with mourners. This feels like one of the happiest places I’ve ever been, a strange departure from the cemeteries I’ve visited back home. Tombstones and burial mounds have been decorated with fresh flowers and paper ornaments, while entire families picnic in the spaces between. I unfurl my kite and look skyward, but trip over a fresh mound and land on my backside in front of an elderly woman hanging a garland from a wooden cross. I’m terribly embarrassed, but she waves my worries away, takes me by the hand, and tells me of how she’s come to visit her husband on their first year apart. She speaks to him of what he’s missed – the wedding of their youngest son – and the year ahead, and tells me that this isn’t the time or place to mourn. Día de los Muertos is about reconnecting and staying in touch. She tells me to keep that in mind when I finally fly my kite. I thank her for enriching the most moving festival experience of my life.

I’ve drifted further afield in my search for the perfect fly zone, and landed on a volcanic ridge at Lago de Atitlán, a mammoth crater lake where a trio of towering volcanic sentries keep watch over a dozen picturesque Mayan villages. Día de los Muertos is a big deal at Atitlán, and the aftermath is evident – the streets of Panajachel, the main town, are quiet, but bits of tissue paper cling to updrafts overhead. I roll through the village of Santiago, where locals hold fast to ancient Mayan and Tzutujil traditions, the most fascinating of which is the cult of Maximón, a venerated folk saint cared for by the religious brotherhood of the Cofradía. Ages ago, the spry Maximón visited Santiago and bedded all the village wives (at the same time). When the Cofradía returned from the fields they punished Maximón by chopping off his arms and legs, then flipped the script and decided to honour him as an icon. I slip into Maximón’s shrine in time to witness the Cofradía tip the stunted effigy back for a sip of rum, which he chases with a cigarette. I offer Maximón a few quetzales before I leave, bent on dipping my toes in the cleansing waters of the lake. My guide regales me with tales of Atitlán’s guardian serpent and the ruined city of Sambaj, the largest of Atitlán’s archaeological sites, which sits more than 20 metres below the surface. The ruins are more than 2500 years old, yet still people carry the memory of, and communicate with, the departed. I finally feel like I’ve found a place where I’m comfortable bringing up the dead.

I hike some 150 stone steps from the shore to Casa Palopo Atitlán, built into the hills near the village of Santa Catarina. Palopo, with its rustic elegance and charming decor – artist Fernando Botero has his figurative hands all over the walls – is the sort of place my aunt would have wanted to stay forever. I picture her telling me to take a photo of the sweeping panorama while she helps the bartender craft the world’s strongest Irish coffee, before raising her glass to a wild sunset caught on the lips of the volcanic trio. I use my little instant camera to snap a picture of the lake, and fix the print to the wing of my kite. With night falling, I toss the kite into the air and let the wind take hold, hardly slowing the line as it slips through my fingers. Before long the kite is out of sight, carrying what I hope is the first of many messages to a place I’m not quite ready to visit, and a promise to my aunt that she’ll receive a postcard from every stop I make on the road. 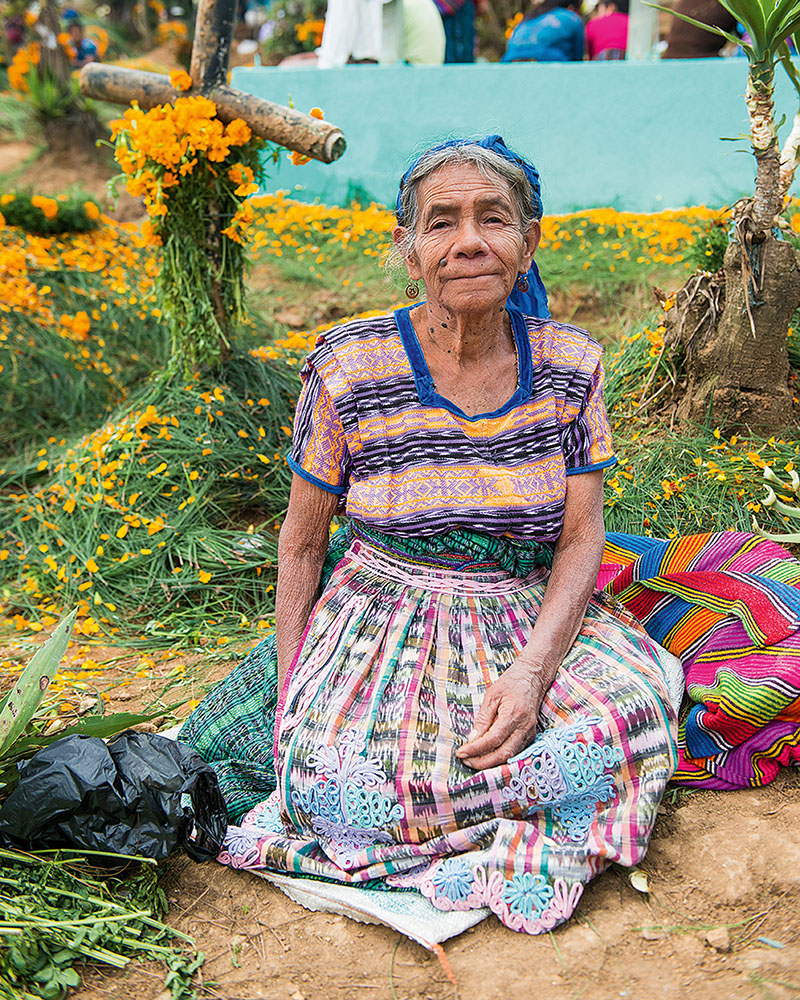 It’s about an hour’s drive from Guatemala City to Antigua. Either organise a private transfer through your hotel or take a minivan shuttle – you’ll see the desks once you’ve cleared customs.

In Antigua, Casa Palopo is a three-bedroom villa, two blocks from the centre of the city, that can be rented for private use. Rates and bookings are available by emailing reservations@casapalopo.com.

Casa Palopo Atitlán is a stylish, private retreat with nine unique suites that reflect the artistic heritage of the region. Restaurant 6.8 Palopo dishes traditional Guatemalan and inspired international fare in one of Central America’s most spectacular settings.
casapalopo.com

For more information on Antigua and other Guatemalan festivals, visit the country’s official website.
visitguatemala.com

The two-and-a-half-hour trip to Lake Atitlán can be taken on a shuttle with Antigua Tours. The company offers a shared service four times a week or can organise a private transfer at other times.
antiguatours.net

Travel between villages at Lake Atitlán is done almost exclusively via water taxi. An old trail winds around the lake, but would take a day or two to complete. 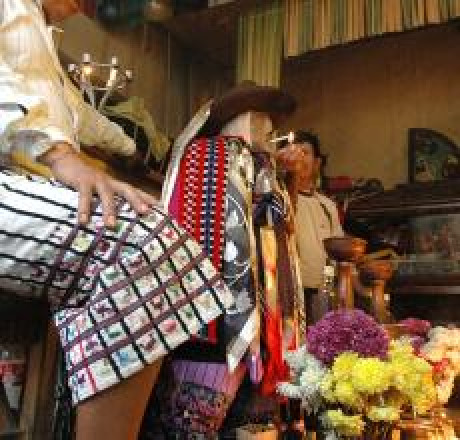 Scarf-wearing, cigar-toting Maximón is believed to be the reincarnation of the Mayan... 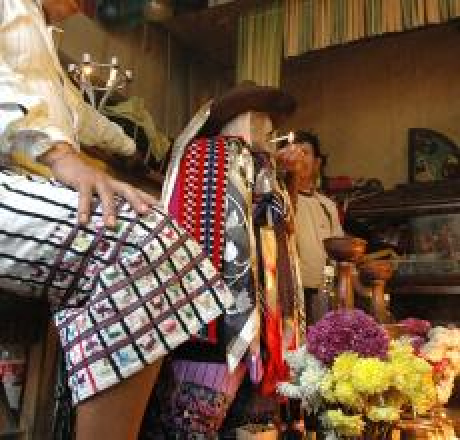 Scarf-wearing, cigar-toting Maximón is believed to be the reincarnation of...

Scarf-wearing, cigar-toting Maximón is believed to be the reincarnation of the Mayan...