Steve Davey dances with the Kalash people in northwest Pakistan.

My introduction to the Kalash is an odd one. In front of me is a pick-up truck packed with special forces commandos, and my own personal armed officer is slouched beside me clutching an AK-47 on his lap. His eyes are hidden behind gold-rimmed sunglasses and his young face is barely covered with a shabby beard.

We screech to a halt in the middle of the village. It is completely deserted, but the sound of frantic drumming echoes down from a nearby hillside. I set off towards the beat, my policeman following behind as I start to climb a trail of stone-lined stairs that lead around the hill.

With each step up the winding path, the drumming gets louder. The abandoned surrounds quickly turn when I reach the top as a mass of people dance around the flat top of the hillside under an open shelter topped with a corrugated roof. This is the charso, a ceremonial dancing ground for the valley, and the scene is one of colourful chaos. I pause, a little unsure of my welcome. But the worry quickly dissipates as a large man bounds towards me with open arms. “Welcome,” he calls out, embracing me before hanging a woven  red and white strip around my neck.

Wearing the ubiquitous Pakistani salwar kameez (baggy trousers and matching long shirt), he is dressed like most of the men in this part of Pakistan, but his features set him apart. He has relatively pale skin, almost blond hair and piercing light green eyes.

Dancing around him in short animated lines, the women are dressed in a way that is incongruous for Pakistan. Faces uncovered, they are wearing black robes decorated with coloured embroidery and floral patterns in blue, green, orange and pink. Around their necks are vast rings of brightly coloured beads, and each wears an ornately beaded headdress, consisting of a long, intricately embroidered flap and a beaded headband decorated with hundreds of tiny cowry shells.

The women circle the charso in lines, laughing raucously, as longer rows of men surge backwards and forwards with wild abandon. Most of the older men and women stand around the village shaman as he sings about stories from his people’s past, present and future. They adopt an entranced pose, with one finger touching their chins to signify their attention. Other elders partake in a solo dance, their eyes closed and their hands raised to the air, moving as if in rapture.

These are the remote Kalash people of northwest Pakistan and, after a somewhat fraught journey, I have made it here in time to witness their exuberant Chilam Joshi spring festival.

I have dreamed of visiting the Kalash Valleys ever since I saw a grainy reportage shot by Steve McCurry in a 1981 issue of National Geographic. In the story the writer, Debra Denker, spoke of meeting village leader Saifullah Jan and his then rosy-cheeked two-year-old son, Yasir. On this journey, I am introduced to Yasir, now a grown man.

Meeting Yasir is no coincidence. The Kalash people are a small indigenous group of about 3000 people, living in three remote valleys near Chitral. The valleys – Rumbur, Bumburet and Birir – are collectively known as Kalasha Desh. The Joshi festival is being held at the charso for the entire Rumbur Valley in Grum, the village where Yasir lives. I was always likely to bump into him at some point – not least because I will be staying at the small guesthouse run by his father.

Almost every aspect of Kalash life is at odds with the religion of the surrounding people. In a strictly Muslim region of a resolutely Muslim country, the Kalash people are polytheistic animists, with a series of deities such as the pastoral Sorizan and the ancestor Balumain. Widely considered heretics by the surrounding population, they celebrate three main festivals a year: the Joshi spring festival, the Uchau autumn festival and the Caumus winter solstice festival.

It is not just their religious beliefs that cause problems for the Kalash. In the tribal interpretation of Sharia law, women can be sentenced to death for dancing with men, yet the Kalash women are not only wearing bright clothing and unveiled faces, they are dancing wildly with unrelated males from all of the valleys. Although there are still some inequalities for women in Kalash society, they are considerably more emancipated and sexually liberated than the Muslim women in the surrounding areas.

The Kalash people also drink and are renowned for their mulberry wine, which, in reality, is more like a strong spirit. No doubt mindful of the number of Pakistani soldiers nearby, festival-goers do a fine job of keeping the elixir concealed – I don’t see any public drinking at the charso, but there are a number of flushed faces and I can smell drink on many people’s breath. Away from the charso, I am offered many shots of the potent wine.

At one point, there are loud shrieks of excitement and many of the adolescent Kalash men and women run out of the charso and down the hillside, seemingly in hot pursuit of someone or something. No one will explain the disturbance, and I can only assume that someone has been caught in the act of ‘eloping’, much to the great entertainment and intrigue of their neighbours.

The festival ends with all of the women dancing around in a massive circle, while the menfolk burn offerings of branches and even food in  a small flat area next to a giant boulder, part way up an adjacent hill. This seems to be the culmination of the ceremony, and people start  to drift away as the flames burn.

The Kalash are mindful about their position in Pakistan society and are always worried about accusations of encouraging apostasy – or the conversion of Muslims from their religion. Along with blasphemy, this is considered one of the greatest crimes under Islam.

At one point in the festival all of the non-Kalash are banished to the stepped area overlooking the charso. I follow them, but I am beckoned back in an animated fashion. It seems as a non-Kalash, but also a non-Muslim, I am welcome to join in this part of the ceremony. Qazi Pali Azam, the Keeper of the Secret Song, leads a ritual where sprigs of walnut branches are waved then ceremonially cast over the edge of the charso.

The next morning, I meet Yasir for breakfast in a neighbouring house. Kalash houses are single storey, without windows, and made from slabs of stone. They tend to be built into hillsides with the roof of one house forming the veranda of the next. Some are steeply stacked four or five levels high. Inside this windowless existence is, naturally, dark, although some houses have electricity from small water turbines.

There is a large square earth area with a fire in the middle of the houses, and sleeping platforms around the outside. It is a characteristic of Kalash homes that all of the pots and crockery are displayed on shelves behind the fireplace as an indication of wealth and status.

Over hot unleavened flat bread and sweet chai, Yasir tells me the legends of their ancestors. Traditionally, the Kalash believe they are descended from the soldiers of Alexander the Great who passed this way in the fourth century BCE. A number of wounded soldiers were left behind, and they moved into the Kalash Valleys and settled down with local women. This is how they explain their physical difference from the surrounding people, although these origins don’t stand up to current DNA testing.

After breakfast, I make my way to the second Joshi festival. As the richest and most easy to reach of the Kalash Valleys, the Joshi in Bumburet attracts a number of VIPs who are seated on a dais overlooking the event. The security detail is much larger here. We are only a short way from the Afghan border; the risk from the Taliban is high and the tension of the soldiers is palpable. I later learn there has been a specific threat and more than a thousand special forces soldiers have been moved into the valleys and further towards the border in order to protect the festival – or, at least, protect the VIPs.

The Bumburet Joshi is more crowded and frenetic than Rumbur’s. A lot of male domestic tourists are standing around the edge watching – apparently drawn by the mystique of Kalash women’s sexual liberation – and there is also a media presence. 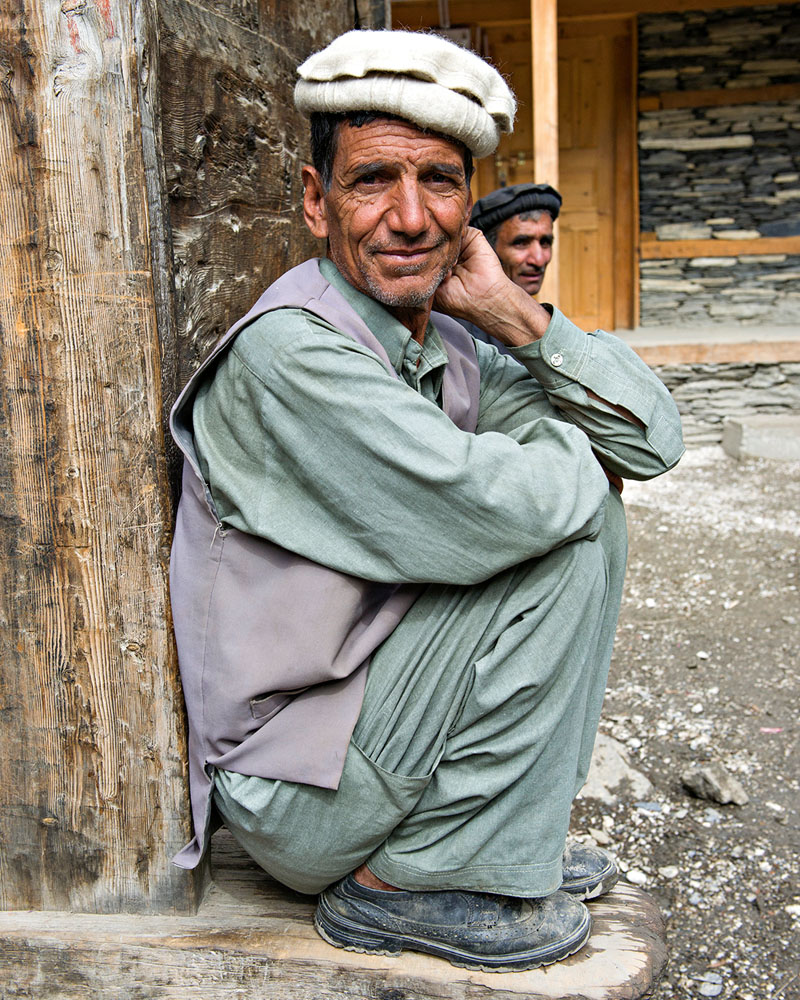 Kalash men dress more like the local Muslim Pakistani men, but their lack of beards and very Western features set them apart. Click to view gallery

The dancing is more frantic, too. Longer lines of women are running through the charso, linked together by gripping knotted versions of the same woven strips that I was given in welcome the previous day. They crash through the crowds, laughing hysterically and facing away from the watching males. It is as if they feel the need to exaggerate their Kalashness under the gaze of so many outsiders.

It might be the timing of my arrival at the festival, or the fact that there were so many local dignitaries and Muslim men watching, but I do not see any rituals other than dancing taking place at the Bumburet charso – whether it be the casting of the walnut leaves, the burning of offerings by the men, or even the storytelling in the middle of the charso.

Back at the guesthouse in Rumbur Valley that evening, I am given bad news. Now that the festival is over, our security detail is shipping out. My chance of staying an extra night with the Kalash and a leisurely day exploring the area is no longer possible. The guards are anxious to be off before dark and I have to go with them. I say a hurried goodbye to Yasir, and reluctantly get into one of the jeeps. My time in this unique part of the world is over, and I am conscious that the Kalash people will once again be without any security from nearby Afghanistan until the next load of tourists and VIPs stray into their valleys.

There are currently only two flights a week to Chitral from the capital, Islamabad, on Fridays and Sundays. Planes leave early in the morning, and are regularly cancelled due to fog and other bad weather. It is advisable to arrive well before the festival in case of flight cancellations.

A secure and considerably more atmospheric option would be to take one of the daily flights (twice daily Wednesdays and Sundays) from Islamabad to the north-eastern city of Gilgit, and then drive to Chitral via the Shandur Pass. This is a two-day drive, but passes through spectacular scenery, including the highest polo ground in the world.

Visitors to Pakistan should get a visa in advance. This can take some time, and you might encounter requests for local permissions and references.

UK-based Travelpak (travelpak.co.uk) offers a number of escorted tours to Pakistan, including the Kalash Valleys for the Joshi festival. They can assist with arrangements to stay in a guesthouse in Rumbur Valley, as opposed to the more commercial options in Bumbaret, as well as help to secure the necessary permissions for your visa.