Now I feel that I should warn you in advance: this story is going to be about Christianity & history. If you want to turn the page now, then please do – I won’t be insulted. After all before I went to Ethiopia I probably would have done the same damn thing.

But then, before I went to Ethiopia I had the same jaded view of the place that most people do. Band Aid might have saved a lot of lives a bunch of years ago, but it has really coloured the perceptions of a whole civilisation.

“Feeeed the world – do they know its Christmas time” Well yes, actually they bloody do. The Ethiopian royal family traced their lineage back to a liaison between the Queen of Sheba and King Solomon. Hailie Selassie – the last Emperor and revered by Rastafarians - was believed to be 155 in line from this regal meeting. The first in line was credited in some quarters as bringing back the Ark of the Covenant from the Holy Land, to Axum in the north of the country. Ethiopia itself adopted Christianity in the fourth century AD (as opposed to having it foisted upon them by missionaries during the colonial scramble for Africa in the Victorian era). So, yes, I think that you could safely say that they do know its Christmas, and they probably care far more than most of the rest of us.

And there IS snow in Africa, and not just on the summit of Mount Kilimanjaro. It gets bloody cold up in the highlands of Ethiopia as I can well vouch for. I am freezing.

I am at Lalibela in the bleak north of the country. If any place sums up the multifaceted character of Ethiopia, it is Lalibela. A UNESCO world heritage site on a remote plateau, surrounded by some of the poorest people you will ever meet – eking out a tenuous existence in some of the most remote and unfertile areas on the planet, many of them being supported by UN feeding programmes.

There are 11 stone carved churches here at Lalibela, dating back to the reign of King Lalibela over 800 years ago. Four are free standing, the rest are cave-style – carved into rock faces. Ethiopian legend has it that the king was poisoned, but survived the attack. In gratitude he built the churches, with the help of angels, in just one day. I made the mistake of discussing this theory with Hailemiriam, a young student who guided me around the churches for a few days. His absolute belief in the teachings of the Christian church helped me to get amazing access at the various churches, but he certainly wasn’t the person to question the legend of the Lalibela churches with! There are a couple of other theories. Popular in the West is the notion that the churches were constructed a few hundred years earlier by Crusaders returning from the holy land, but the most likely is that the construction was started by King Lalibela, but finished later.

Whatever lies behind the construction, the churches certainly are an amazing feat of engineering. The most well known is Bet Giorgis, the House of St George, created from solid rock in the shape of a giant cross. Looking down into the courtyard from ground level I could see that the builders would first have had to cut down six metres to form the outside of the building and the courtyard. Then they would have cut doors and windows into the structure and hollowed it out from the inside – making sure that they left adequate supports for heavy structure. All of this was done (with or without the help of angels) with just hand tools.

We move on to the Bet Gabriel-Rufa’el (House of Archangels) Church also known as the Palace of King Lalibela. I’m a little nervous. Last time I was here about three years before I managed to get into a bit of a fight with the priest. I was on an overland tour and a few of us were walking round. A small boy tagged along with us and offered to mind our shoes when we went into the churches. He was decent enough so I let him. It was a good arrangement until the priest at this church slapped him round the head without warning telling him to get out of the church. I don’t like anyone slapping kids – something I managed to convey to the supposed holy man in no uncertain terms. True at that time we also had a seemingly tame monkey that adopted us as well, which might have sent the priest over the top. Still if he recognised me (or remembered the boy or the monkey) he seemed to think better than to mention it, and I didn’t think to bring it up.

I’m not a very good tourist. I find facts just whistle over my head, and my eyes glaze over with too much sightseeing, but there’s something about Lalibela that does manage to entrance me. The churches are undoubtedly beautiful, which helps, but also the liberal smattering of pilgrims mix well with the odd hermit, who sit there reading tatty bibles. Other highlights are the treasures that each priest brings out conspiratorially at each church. Sometimes it’s an ancient bible, hand painted onto goat skin in the old forgotten religious language of Ge’ez, or even an ancient painting of religious icons, some five hundred years old, but with colours that are still so bright they could have been painted just yesterday.

Inside of the Bet Medhane Alem (the House of Emmanuel), the priest shows me the cross that was fairly recently stolen by a tourist but later returned. It’s one of the most sacred treasures, said to belong to King Lalibela himself. This church is huge. Eight hundred square metres, and completely supported by 72 pillars – half inside and half outside this great structure. Like Bet Giorgis, it was carved in one piece from solid rock and is reputed to be the largest carved monolithic structure in the world. The inside is huge and gloomy. The priest suggests that I come back the next day as there is some sort of festival going on.

When I do get back, the place is absolutely packed with pilgrims. Some sit around appearing to do very little, but others are praying at the front. The same priest from the day before brings out the cross and is immediately mobbed by pilgrims struggling to get to kiss it. A moment of fear flickers across his place then he growls something in Ethiopian, and the crowd calms slightly. He disappears down the church pursued by his retinue of the faithful.

Outside in the overcast daylight, the courtyard of the church is also full of pilgrims. A priest is reading from a bible, but he is totally obscured by a large umbrella and his disjointed voice booms around the courtyard. 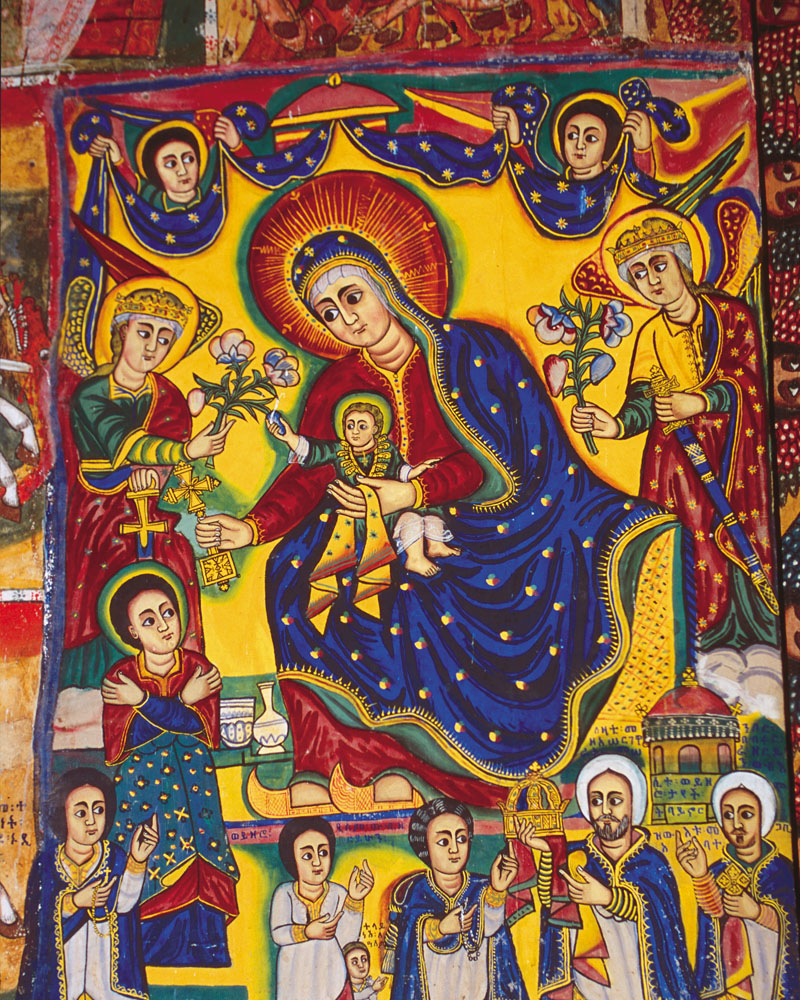 One of the things that I find the most evocative about the churches is the fact that they’re still so revered, and an active place of worship. Each has its own priest and congregation, and although to Westerners they are just one more site on the UNESCO tick off list, to Ethiopians they’re a source of hope and comfort in their hard lives.

On my last full day I decide to visit the Asheton Maryam Monastery. This is a two or three hour walk up one of the mountains overlooking the town. Yet again Hailemariam is going to be my guide – even though, nothing personal, I would probably rather be on my own.

As we head out of town a bunch of touts with donkeys try to rent us mounts for the journey. I feel guilty, but I really don’t want one. I’ve found this a real problem in Ethiopia. I feel guilty as hell turning down services I don’t want as people rely on the income.

The path is steep, but hell, the views are fantastic. Not for the first time I get an idea of how absolutely remote this place is. The altitude feels pretty harsh up here, which is not helped by the heavy camera bag. Hailemariam offers to carry it again, but at under half my size, I really don’t have the heart to let him.

After a couple of hours slog we reach a plateau. It’s windswept and barren here, but there are a number of small stone dwellings, and a patchwork of dry, pale fields covered with stones and rubble. I wonder how anyone can make anything grow up here – but people are trying. In one of the fields a man is plowing the field, with an old wooden plough pulled by a couple of skinny cows. It’s the sort of thing that you might expect to see in a museum or on the wall of a country pub, but here it’s still in use. A young girl stands in the field in a torn dress and bright blue shoes. She’s sowing seed as he plows. They’re right on the edge of the plateau, and the ground just drops away at the edge of the field. There is, of course, no fence or barrier. 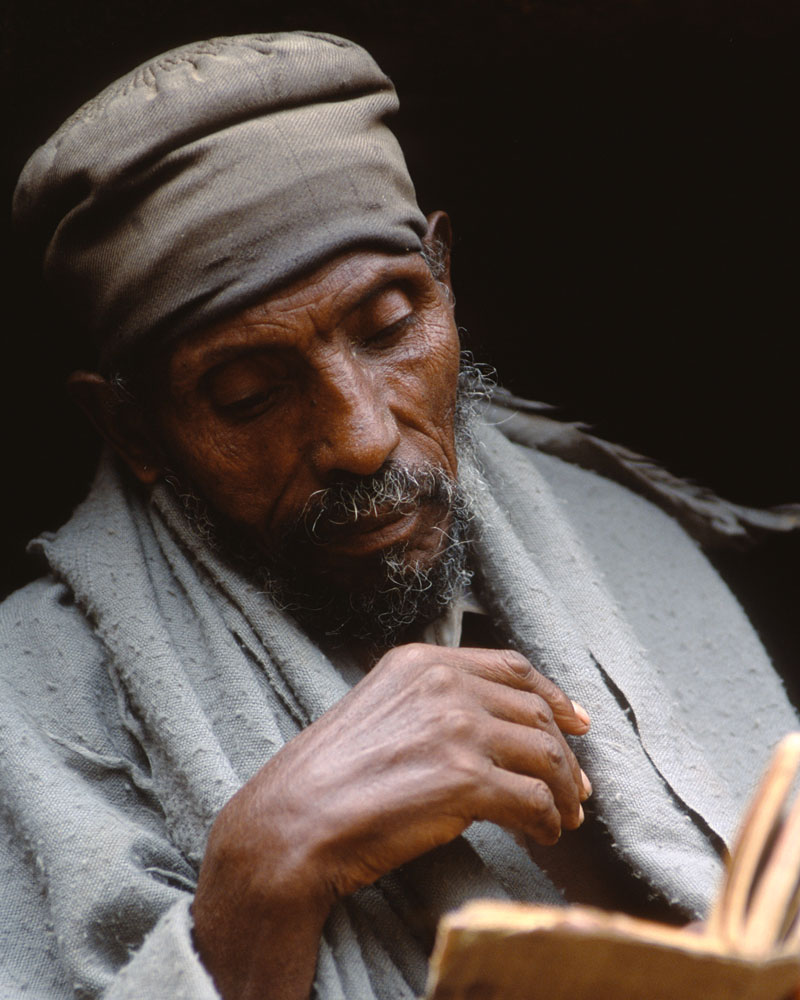 This priest had little interest in us and was content to continue studying his bible. Click to view gallery

We continue on up the hill. Another young girl appears. She has a couple of bottles of a soft drink. They’re warm, so I tell her to leave them in a trickling stream, and say that we’ll buy them on our way back down.

The monastery is much smaller than I thought, and set in a cave. An old priest is inside. He shows neither surprise nor pleasure at seeing us arrive, just beckons us in to show us around. There are all sorts of religious treasures inside here – including ancient paintings and illuminated bibles painted on goat skin. The priest has a fantastic face and I invite him outside to take his picture. He looks at the camera with a face totally timeless and unfathomable.

The cola girl appears with our two bottles. They are colder now. I buy one for Hailemariam and one for me and we drink them eagerly. She grins happily. She’s a smart kid and has obviously picked up on the cold drinks message. I’ve visions of passing this way in a few years and seeing her running a small café and guesthouse. She’ll go a long way if people will only let her.

She follows us to the edge of the plateau carrying the empty bottles, then waves as we head back down the path. Just by something as simple as buying a couple of soft drinks we have, in some small way, made the world a better place.

Travel from Sydney to Addis Ababa, the capital of Ethiopia, with Qatar Airways from approx US$1200 return. 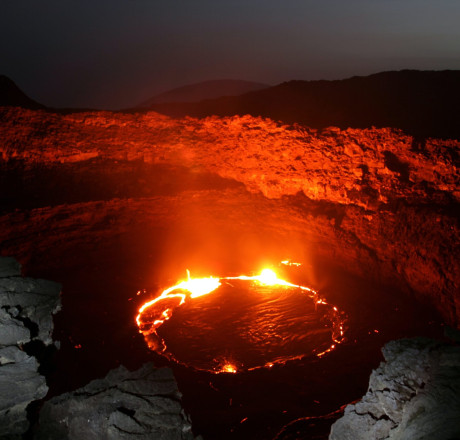 Everyone pines for warm weather when travelling, but ‘the... 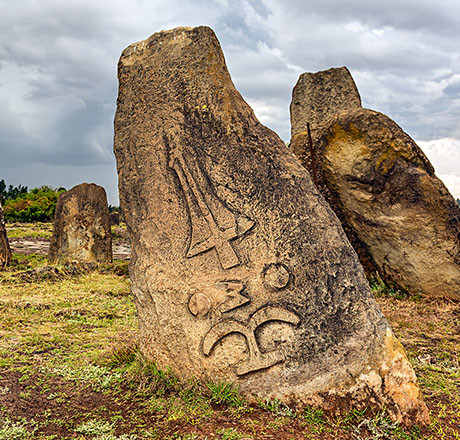 Looking for a challenging hiking experience... 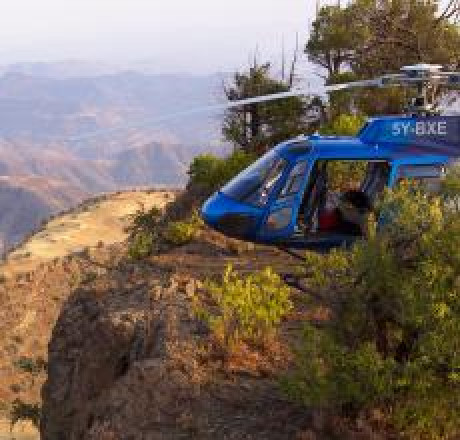 Skim the clouds in a chopper then swoop into some of the most... 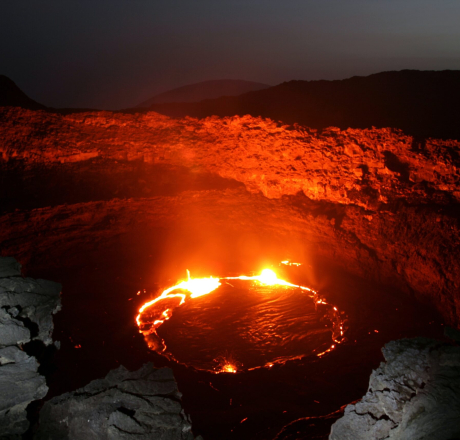 Everyone pines for warm weather when travelling, but ‘the hottest place on... 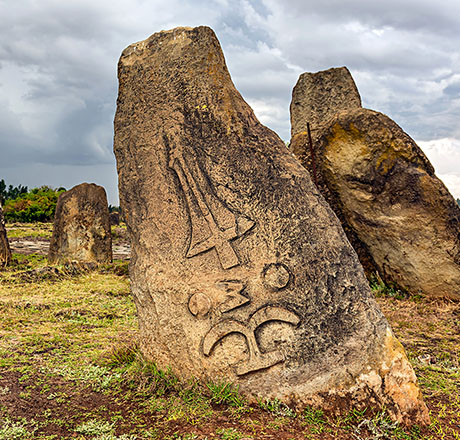 Looking for a challenging hiking experience through spectacular scenery?... 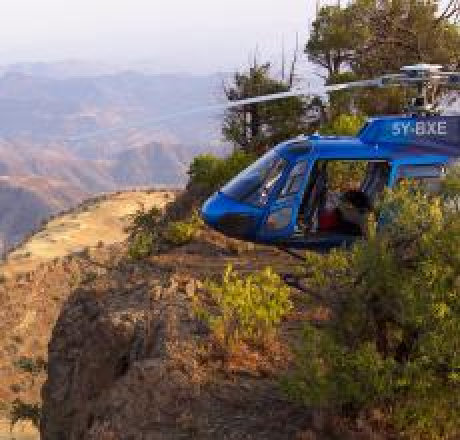 Skim the clouds in a chopper then swoop into some of the most remote...