Farm to Fork in Albania

Farm to Fork in Albania

In a forgotten corner of Europe ripe for exploration, a new wave of young chefs and vintners is tending to a cuisine once abandoned.

Much to the driver’s bewilderment I halt the city-bound bus in the middle of a four-lane highway by an industrial wasteland on the fringes of Tirana. Thankfully there’s a bridge to my destination: a greige-looking area that boasts a medley of tyre warehouses, half-built houses, water towers and train tracks that would definitely constitute Stephen King territory come nightfall. It’s a stifling August day but the burly mauve clouds are threatening rain, the mountaintops of Dajti National Park no longer visible.

After 20 minutes of meandering, hopefully, along bitumen punctuated by dirt track, the tractors and bicycles are suddenly replaced by parked Range Rovers and Mercedes. And, like a mirage, the tall gates of Uka Farm appear. An organic family-run restaurant and winery that was founded by Albania’s former minister for agriculture in 2014, Uka is set among nearly two hectares of farmland and boasts the youngest winemaker in the country at its helm.

It’s one of a growing legion of local restaurants that seeks to revisit the traditional food cooked for centuries by grandmothers in modest country kitchens, and to pay homage to the rich, Mediterranean produce this soil has long nurtured. The menu at Uka is an ode to these simple pleasures: country-style bread, grilled wild mushrooms, platters of cheese from the Albanian Alps and a ‘village salad’ of rosy tomatoes, plump green olives and sweet carrot ribbons. Even the interior is pared down and distinctly rustic – think red gingham tablecloths, pine chairs and wood-fired brick kilns – to ensure the focus remains on the food. Subsistence farming has long been a way of life here, but only now is a farm-to-fork diet starting to be seen as a source of pride.

“We were closed for almost 50 years,” says Albanian chef Bledar Kola of the communist rule over the Balkan state. “When we came out we were like a dry sponge that soaked up all the water.” For a populace that was practically imprisoned within its own borders – with few allowed to leave and even fewer allowed to enter – almost any influence from the outside world was deemed cosmopolitan and aspirational. During those days, under the dictatorship of Enver Hoxha, chewing gum was rare enough to warrant shared use and the arrival of bananas was so monumental that it’s stained indelibly onto the memories of many Albanians.

Walking the streets of Tirana now it’s hard to imagine such austerity reigned only 25 years ago. The capital might be scarce of skyscrapers but it harbours more leafy coffee shops and restaurants than any other city I’ve ever wandered. By sundown bars in the trendy Blloku district overflow with beautiful young creative types languorously smoking cigarettes and drinking glasses of local red.
It’s families that fill the Great Park of Tirana, where ladies sell sunflower seeds by the lake and kids cruise around on trikes. Here, hiding below an apartment block with scalloped balconies, lies Bledar Kola’s new restaurant, Mullixhiu. Having spent the best part of his working life abroad – performing stints at Michelin-starred London restaurants and even Copenhagen’s Noma – Kola came home in 2007 to a country that was very different to the one he left: “Before the 90s there were not so many restaurants in Tirana. We also have a very strong influence from Italy so it’s rare to see Albanian restaurants, but we’re getting more open-minded.”

The Slow Food Chefs Alliance, which launched in Albania in mid-2015, has helped instil a growing sense of honour in local cuisine. But the hangover from Hoxha’s days still encumbers the city’s kitchens. “We have a lot of fresh vegetables in Albania, but eating them is considered a poor man’s diet,” says Kola. “When Albanians come to visit us at Mullixhiu they get irritated because only one dish on our 10-course degustation contains meat. For 50 years everything we had was rationed – people have missed it.”

With its collision of Greek, Italian and Turkish influences, it’s flabbergasting Albanian food isn’t feted globally. Vibrant city centre restaurants serve mixed mezze platters, citrus and pomegranate salads, thick stews and stuffed, roasted vegetables. In the dimly lit dining room of Mullixhiu it means a more contemporary stroll through Albania’s greatest hits. Small glasses of tart cornelian cherry juice. A crisp nest of kadayif (finely shredded filo pastry) perching atop a creamy and sour pool of yoghurt and olive oil, dusted with a salty hit of grated black olive. A bowl cradling petals of dehydrated cabbage – the sweet, concentrated tang offset by an earthy punch of powdered porcini mushroom. Then there’s japrak, the dill-spiked rice with a tender hint of verbena. The al dente curves of eggplant tossed with figs in a gooseberry and purslane sauce. A pocket-sized filo parcel concealing a quail’s egg. And the dynamite stick of blackberry ice-cream served within a bramble.

Although the technical mastery is on point, it’s the quality of raw product that is king for Kola. “Now I’m focusing so much on Albanian ingredients,” he explains. “If you don’t use the produce of your country it’s like being married and cheating on your wife.” The Slow Food Movement’s Ark of Taste project also seeks to shine a spotlight on foods that are at risk of extinction. In Albania there are 43 products on this list. Items such as mishavin, a delicate white cheese made by shepherds in the Albanian Alps; trofta e egër e Cemit, a wild trout from its freshwater lakes; and verëtrëndafil i egër, a rosehip wine from its southern valleys.

Mrizi i Zanave, an organic farm restaurant perched near the Montenegrin border in northern Albania, is the country’s original slow food trailblazer and proud parent to Mullixhiu. After toiling for years in restaurants in Italy, Albanian Altin Prenga and his brother Anton came back to their small home town, and with a ‘build it and they will come’ attitude, opened the restaurant in 2009. Such has been the success that even today tables book out weeks in advance.

A year after opening, Mullixhiu is still building its own reputation – and that of Albanian cuisine – meal by meal. Locally based ambassadors and foreign journalists covet Kola’s dishes, booking private dinners and visiting in their droves, but locals take a little more convincing, he says. “If foreigners come and tell us something is nice only then do we value it,” he says. “We have a very rich cuisine, but to revisit it isn’t easy.” 

METHOD
Finely chop the spring onion and cook slowly with the bay leaf and olive oil over a low heat until softened.
Pour in 100g of the rice and continue cooking for a further three minutes.
Add 1 cup of boiling water and bring to the boil before covering the saucepan. Allow the rice to cook – without stirring – over a medium-low heat until it’s cooked but retains a slight bite, and all the water is absorbed. This should take around 20 minutes. Prior to taking the pan off the heat, remove the bay leaf and mix in the chopped dill.
In the meantime, heat the vegetable oil in a heavy-bottomed, tall-sided pan until it reaches around 160°C. If you don’t have a deep-fry thermometer for measuring the temperature then simply slip in a grain of rice and wait until it pops up in the oil and starts to crackle. Once the oil is hot enough, slowly feed in the remaining rice grains and wait until they are lightly golden and crisp before removing onto a paper towel to absorb the excess oil.
Arrange the dill and rice mixture on the plate as desired, before garnishing with the lemon verbena powder, the two nasturtiums and the sour cream whipped to a foam. Finally, top with the deep-fried grains of rice. 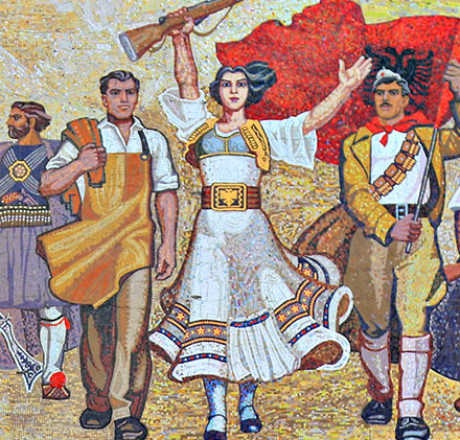 We’re tipping big things for this burgeoning Balkan country, so now’s the time to make... 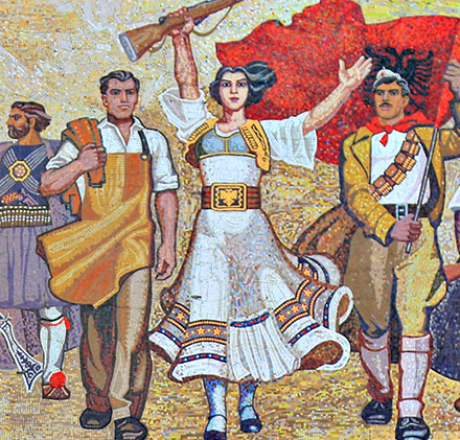 We’re tipping big things for this burgeoning Balkan country, so now’s the...

We’re tipping big things for this burgeoning Balkan country, so now’s the time to make...