On a still charming Caribbean island, Flash Parker finds himself in thrall to the rhythm of the night.

Waking on the beach, I discover a fat-clawed crab has clipped itself to my lip. I sit up, detach the pincer from my pucker, and cough a mouthful of sand into the little skiff I was sleeping beside. My beachy keen surroundings are familiar, if not altogether immediately recognisable. I still have my camera slung around my neck, and am wearing the same clothes I had on last night – an unbuttoned gingham shirt, khaki shorts and, luckily, my ultrafino montecristi, a precious defence against the sun’s dark arts. My sandals are nowhere in sight, likely lost at sea with my pride. Mystery clouds my mind.

From the calm chromatic water, a tall, sinewy man appears. Long, heavy dreadlocks flecked with brown and grey swing under a leather cowboy hat; his muscles ripple as he fights the friction of the sand. He walks towards me, offers his hand, and pulls me to my feet. “Looks like you had a good time at Moonsplash,” he says, pulling down his shades to wink at me. “Did you put anything good on that camera?”

Moonsplash. My camera. Of course! The clues I need to unlock the mystery. Suddenly I remember where I am (on Anguilla’s Rendezvous Bay) and who this is (Bankie Banx, Anguilla’s legendary folk son).

I scan backwards through the images on my camera; the final photo was taken sometime after 5am right here on the beach, with the full moon illuminating the sand and St Maarten across the bay, a few dozen folk dancing to whatever act was still on stage. The image is as fine a representation of the Moonsplash Festival as there ever was, and slowly my memories are becoming mine again. Bankie is gone in a flash, tucked back into his wondrously ramshackle Dune Preserve, the beach bar-slash-music club that has played permanent host to his festival since 1995. I scroll further back through time, through the first impressions, through the acts, through the VIP treatment, all the way back to my first few moments on Anguilla, when I dug my toes into the sand, ordered a frozen mojito from the beach bar, and soaked up the sun.

Less than 24 hours prior I had checked into my plush seaside digs at the CuisinArt Golf Resort & Spa to begin my tour of Anguilla’s culinary landscape courtesy of executive chef Jasper Schneider. I’d come to Anguilla in order to become a gastronomic swashbuckler, but in less than a day I turned into a certified reggaephile. The Caribbean’s best music festival has that sort of transformative power. If I didn’t have the photos, I’m not sure I would believe any of it happened.

It was the prospect of relaxation rather than transformation that brought me here, but as I flip through my images I realise my fundamental concept of island escapism has changed overnight. The visual evidence spoke to the sort of essential cultural experience I’d expect to have someplace else, not on a tiny island largely known for pretty beaches, sweet rock lobster and high jinks on the high sea. Memory lane delivers me to a set from Sheriff Bob Saidenberg, the new-wave bluegrass twanger who co-founded Moonsplash with Bankie (born Clement Ashley Banks) back in 1991. Sheriff Bob’s countrified sensibilities – a cagey blend of Pete Seeger and Jim Cuddy – may seem out of place at a reggae festival, but on Anguilla eclectic line-ups have become something of a Moonsplash hallmark: Jimmy Buffet played the Dune Preserve a few years back, while John Mayer took the stage with Bankie in 2011. Yet there’s no denying the reggae vibe rules the roost; I caught Gershwin Lake & Parables whipping the crowd into a frenzy, and spent a little time on the main stage with Jamaica’s Chronixx as he played to every set of hands on the island raised through a raucous rendition of ‘Here Comes Trouble’. I took about a hundred photos of Omari Banks, progeny of Bankie, the West Indies cricket star-cum-Caribbean sonic barometer. Like his father, Omari is of regal bearing and fully commands the space between himself and his audience. Under the watchful gaze of the great wooden lionfish and a facsimile of King Poseidon – local artwork has plenty of space to shine at Moonsplash – Omari opened with an acoustic rendition of “Jehovah Message” from his Move On album. Twenty minutes later Bankie was on stage backing his son, and Anguilla was on fire.

I flip through an embarrassing plethora of selfies, shot from the stage, the crowd and the elevated VIP deck (how I was granted access remains a mystery). Up on the deck I had bumped into an overjoyed Omari, and mined him for a bit of Moonsplash gold.

“I have the honour of saying I was here from the beginning,” he told me of the festival. “I first took the stage with my dad when I was five years old and, ever since, Moonsplash has given me the opportunity to perform and share my music.”

Omari’s humble nature is striking considering most of the locals think of him as their favourite artist, while the foreign folk have come from half a world away to hear him play. Omari and Bankie are the kings of Anguilla’s music scene, and the stage, made from salvaged ship parts cast onto the beach by one hurricane or another, is their throne. Yet I can’t help looking at those last late-night images from the beach, when the Dune Preserve was at my back, the music was all around me and the island seemed like the most remarkable place on earth. Under the full moon, Moonsplash’s ethereal nature is unrelentingly alluring.

I’d come to Anguilla in order to become a gastronomic swashbuckler, but in less than a day I turned into a certified reggaephile. The Caribbean’s best music festival has that sort of transformative power.

With the sun high in the sky on my brand new day, I push memory from my mind and set out to explore Anguilla. I visit CuisinArt’s Tokyo Bay and stuff some king crab robata, rock shrimp tempura and a bottle of red wine into a dry bag next to my camera, then make haste for Sandy Ground. Tucked into a Sea Pro kayak courtesy of Captain Wayne, I set off to explore shipwrecks and the rugged coast, but even on the open water I bump into Moonsplashers. A snorkeller spends every spare breath talking about the time he saw Bankie climb the scaffolding 15 metres above the stage so he could see everyone in attendance; a pair of passing paddleboarders wax lyrical over the aural horseplay displayed during Chronixx’s set. I’m sure I even hear a starfish singing a Sheriff Bob song, but I digress. I go lobster tasting on secluded Sandy Cay, golfing on the CuisinArt greens, and cruising between food trucks in the Valley, and never once escape talk of Moonsplash. Visitors are jealous I bumped into Bankie, while the fella in charge of my saltfish patty at Papa Lash’s food truck hums Omari’s “Let It Go” while he works the grill. Moonsplash is connected to the cultural core of Anguilla, and woven into the national identity so tightly it’s nearly impossible to separate one from the other.

I spend the rest of my Sunday afternoon at the Moonsplash Beach Party on Rendezvous Bay, the annual wind-down that features low-key sets from some of the festival’s top acts. This is a family-friendly event on the Caribbean’s most family-friendly island, and brings out mum, dad and the two-and-a-half kids to chill with the rest of the festival crowd, contributing to the overall conviviality of the event. I whip back and forth between the CuisinArt Beach Bar and the Dune Preserve with arms wrapped around frosty cocktails and rum and raisin ice-cream sandwiches, poke around the lobster, prawns and ribs on the oil-drum grills, and ask Omari to teach me the first few chords to ‘Let It Go’ for the next time I’m quizzed on my Moonsplash knowledge. I even manage to capture a few moments on my camera, because as we all know, if there’s no picture, it didn’t happen.

Anguilla has a small airport of its own, but most visitors arrive via ferry from St Maarten (roughly an hour away). St Maarten has connections to many major airports along the USA’s eastern seaboard. United Airlines has a direct daily service from either Sydney or Melbourne to Los Angeles with onward connections to St Maarten via Newark.
united.com

If Moonsplash is Anguilla’s heart and soul, then the island’s mind and stomach belong to the CuisinArt Golf Resort & Spa and its five fantastic restaurants, each run by a devoted foodie under the tutelage of executive chef Jasper Schneider, a man who knows all of Anguilla’s nascent culinary secrets. CuisinArt is the only Caribbean resort with its own hydroponic farm. Rooms from US$550 a night.
cuisinartresort.com 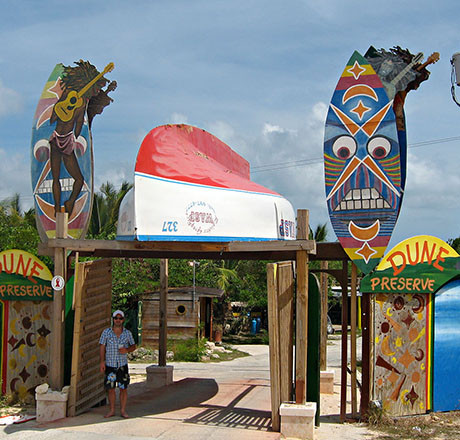 Backed by palm trees on a white-sand beach, just metres from...

Backed by palm trees on a white-sand beach, just metres from the crystal turquoise waters... 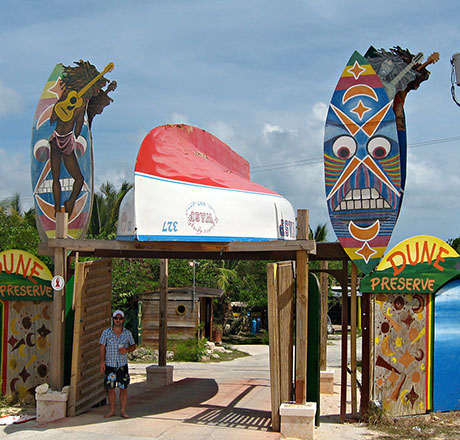 Backed by palm trees on a white-sand beach, just metres from the crystal...

Backed by palm trees on a white-sand beach, just metres from the crystal turquoise waters...