While munching on a minke whale or a supper of seal might not be everyone’s idea of fine dining, Sam Vincent discovers Greenland’s locals wouldn’t have it any other way.

'Save the whales. For dinner'. The saying is a favourite in Greenland, where the locals are fed up with pesky foreigners telling them they shouldn’t munch on minke or nibble on narwhal simply because these are 'majestic creatures'.

To say Greenlandic cuisine can be controversial would be an understatement the size of the icecap that dominates this vast island. Tell a Greenlander that you feel uncomfortable dining on whale and they will be as dumbfounded as if you’ve just announced that you don’t like ice-cream. As well as whale (raw, fried, dried or stewed), local favourites include seal soup and walrus flippers. If this is not enough to offend your sensibilities, there is the most sought-after meat of all: polar bear.

Whatever your view on these foods, there’s a reason why Greenlanders keep eating them: apparently they are delicious. While embracing such unusual treats will win you local respect, there are other options. Greenland is home to many other unique foods that are less confronting for visitors. Either way, maybe leave that Greenpeace T-shirt at home.

Hungry hunters
Before Danish colonisers forced the Inuit into permanent settlements in the 1950s, their diet was based on seasonal hunting and gathering. And while Greenland’s supermarkets are now as well stocked as in mainland Denmark, locals still take great pride in catching their own dinner.

During the long days of summer, whole families take to the hills to hunt reindeer and musk oxen (shaggy bovines that look like the Snuffleupagus from Sesame Street and taste superb when barbecued). By comparison, reindeer meat reminds me of the nasty sausage rolls sold at my uni refectory. Polar bear is hunted in autumn, but no matter how tasty the locals tell you it is, remember the species is now vulnerable.

When I visit in early spring, the locals are skipping school and work to hunt little auks returning to Greenland after wintering in warmer climes. Related to puffins, these pot-bellied birds bob on the waves until alarmed, when they awkwardly take to the sky with comically small wings.

Along with three Inuit friends, I spend a chilly day on a boat looking for them in the fjords off the west-coast town of Maniitsoq. Jagged black mountains speckled with snow rise around us, their shadows making the water as black as sump oil. When the avangnaq, or north wind, whips off Davis Strait and turns my face blue, I am ordered to put on a fluoro fisherman’s costume that makes me look like a council worker. Just as I think I’m getting frostbite, we shoot three auks and head to a cosy cabin to pluck and roast them. Yes, they taste like chicken.

Seal, or puisit, are counted by the millions in Greenland, and are mainly hunted for their pelts. The cooked meat is chocolate brown, oily and delectable. People say it tastes like lamb but I reckon it’s closer to pooch – perhaps the real reason seals are sometimes called “dogs of the sea.”

Whale is a favourite Greenlandic goodie. Before you stop reading this article in disgust, remember that commercial Japanese and European whalers were responsible for the drop in whale numbers in the twentieth century, not the Inuit, who have been hunting them for hundreds of years.

With a mere 57,000 locals to feed, Greenlandic whaling is considered sustainable. Beluga, narwhal and minke are the most common varieties of whale meat sold, caught by professional hunters who must respect a strict quota. When cooked, the nutritious meat tastes like a well-done steak (they are mammals, after all). Also popular is the raw skin of the narwhal, called mattak. It has a subtle, nutty flavour, and takes an eternity to chew.

Seagull nests are raided for their speckled eggs, which are used to make hearty omelettes. One ferry I catch takes an unplanned detour to an egg-rich isle on the whim of the vessel’s hungry first mate.

With such an emphasis on hunting, restaurants aren’t common in Greenland. Easily the best is Nipisa in Nuuk (the capital), which serves modern dishes with fresh local ingredients. Try the lamb, considered among the world’s best because of its diet of Arctic herbs and berries.

Something fishy
If you prefer your fish more politically correct, there’s plenty of delicious seafood on offer aside from whale. Greenland’s economy was built on fishing, particularly for halibut, prawns and snow crabs. As most are exported, you’re better off catching them yourself. You’re far more likely to come across salmon, capelin, trout and char, which are sold at markets fresh, dried, or cured with local herbs. Cod is available fresh, but is mainly hung out to dry to create a jaw-breaking snack exported to Portugal.

Eat your greens
Despite the island’s verdant name, Greenland’s chilly climate has traditionally prevented much produce being grown. Before the Danes brought fruit and vegetables (and beer and bibles, among other things), the Inuit mainly got their vitamin C through blubber, raw fish, and reindeer liver. Other options are the small, kayak-shaped leaves of the qajaasat plant, used to make tea, and kuanni, a local relative of rhubarb that makes a yummy cordial.

For a few weeks in autumn, the tundra becomes blanketed with paarnaqutit, tart, dark berries that work a treat with ice cream. Mushroom lovers should keep their eyes peeled for slippery jacks, which often grow among Viking ruins in the island’s south. Ironically, as global warming starts to turn Greenland green, farmers in the far south are now growing broccoli, cabbage and cauliflower for the first time ever.

Tip of the iceberg
Perhaps the strangest Greenlandic delicacy is a beer that’s literally ice-cold. Greenland Brewhouse is the island’s first brewery, started in the town of Narsaq in 2006 by local fireman Salik Hard. Reversing the adage that you can’t sell ice to Greenlanders, he’s selling it to the world, melting 20,000-year-old icebergs to make what is probably the world’s purest pilsener.

Hard maintains he uses the ice because it is readily available, but there’s no doubt the cult status his beer enjoys in Denmark is mainly thanks to this unique ingredient. The malt is imported from Germany and the hops come from Canada. In addition to pilsener, Hard and his brewmaster make pale ale, brown ale and a particularly delicious dark Christmas beer.

By far the most popular non-alcoholic drink is coffee, which is consumed thin, black and in dangerous quantities. Spend more than a few days in Greenland and you are bound to be invited to a kaffemik, or “coffee party”, where you’ll be pampered by weathered Inuit grannies shuffling around the house in their favourite pair of reindeer fur ug boots. A feature of these gatherings is long periods of silence where everyone clasps their cups and simply smiles. Don’t feel awkward; the Inuit regard communal silence as perfectly sociable and a sign that everyone is at ease.

The only way to experience Greenlandic gastronomy is to go there yourself. SAS flies from Sydney and Melbourne to Copenhagen.
flysas.com

From Copenhagen, SAS and Air Greenland fly to Kangerlussuaq, 300 kilometres north of Nuuk. Air Greenland also flies to Narsarsuaq in the south.
airgreenland.com 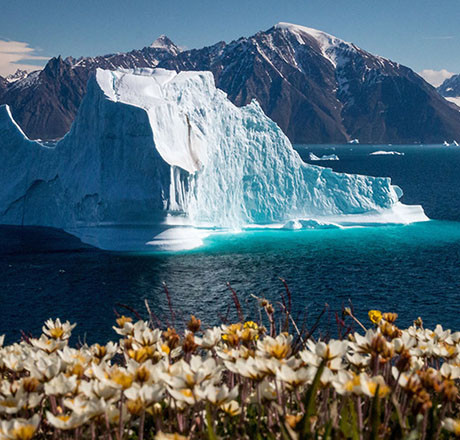 Trek around the edges of the prehistoric ice sheet that...

Trek around the edges of the prehistoric ice sheet that dominates the interior of... 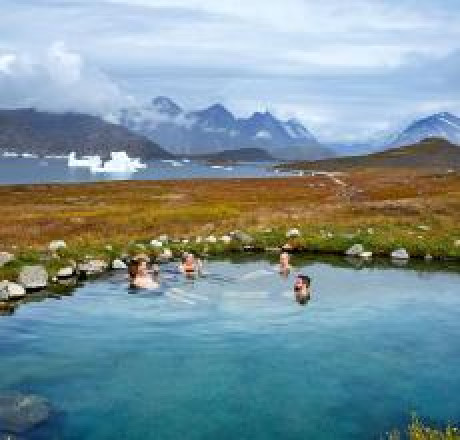 There are thousands of hot springs across Greenland, but none...

There are thousands of hot springs across Greenland, but none quite like Uunartoq. Located... 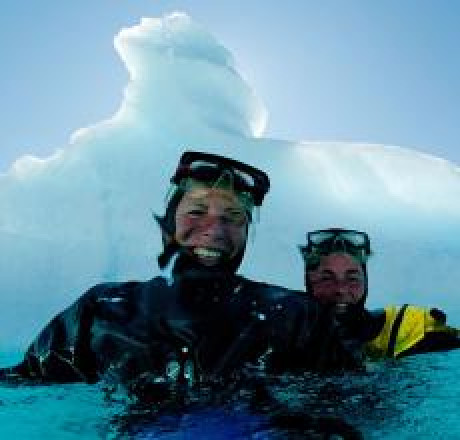 If you’ve done enough tropical dives to have found Nemo 50...

If you’ve done enough tropical dives to have found Nemo 50 times over, it’s time for a... 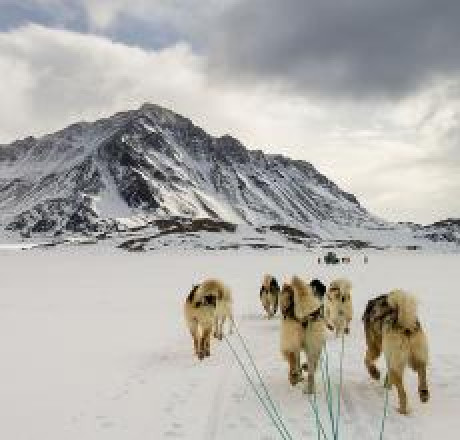 do
Ride a...
Ride a husky-powered sleigh
TUNU, GREENLAND

Climb aboard an Inuit sled and let the huskies do the work on...

Climb aboard an Inuit sled and let the huskies do the work on a paw-powered expedition... 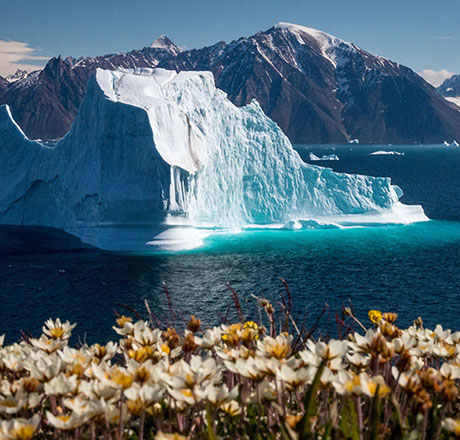 Trek around the edges of the prehistoric ice sheet that dominates the...

Trek around the edges of the prehistoric ice sheet that dominates the interior of... 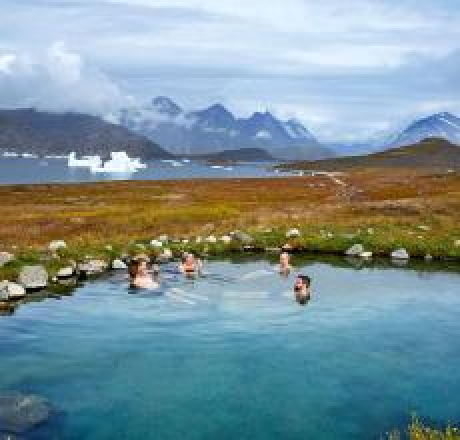 There are thousands of hot springs across Greenland, but none quite like...

There are thousands of hot springs across Greenland, but none quite like Uunartoq. Located... 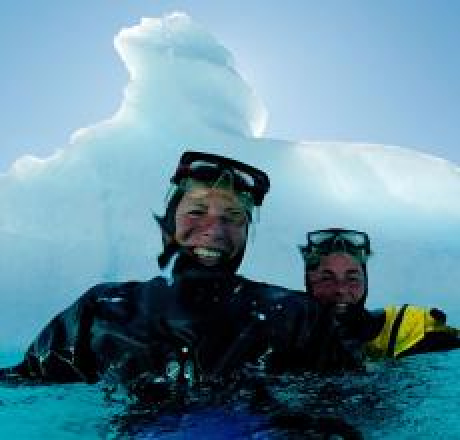 If you’ve done enough tropical dives to have found Nemo 50 times over,...

If you’ve done enough tropical dives to have found Nemo 50 times over, it’s time for a... 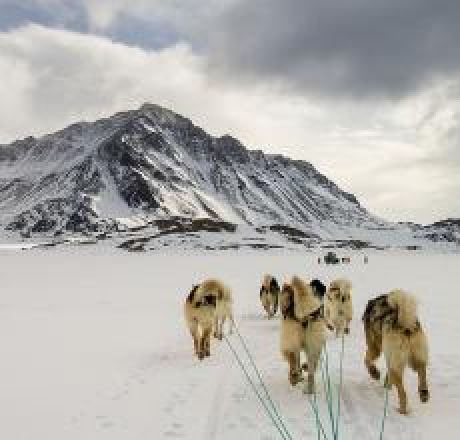 do
Ride a...
Ride a husky-powered sleigh
TUNU, GREENLAND

Climb aboard an Inuit sled and let the huskies do the work on a paw-powered...

Climb aboard an Inuit sled and let the huskies do the work on a paw-powered expedition...