The Green Thrills of Wales

The Green Thrills of Wales

On the rocky coastline situated in the pristine national park of St Davids, Ian Everett finds there’s eco-friendly adventure to be had.

Of all the reasons to jump off a cliff, a good cup of tea may not seem like the most logical. Nevertheless, as I stare down to where the waves crash over the rocks below, my thoughts keep returning to tea. I brace for the leap on the small ledge and with a quick thrust of my legs I spring up and out, hurtling down towards the ocean.

While tea was not the reason for my jump, the sport known as coasteering – a blend of rock climbing, potholing and cliff jumping – owes its origins to the British desire for tea. In the mid-eighteenth century, extortionate customs taxes meant that tea, chocolate and brandy were luxury items. However, local fisherman and sailors were not going to go without their daily cuppa. Under the cover of darkness they would sneak illegal shipments from their boats to the water’s edge, traversing the Pembrokeshire cliffs to seek out sheltered caves and coves in which to hide their contraband.

There are no longer taxmen to avoid, but like the smugglers before us, our small gang of intrepid coasteerers is clambering over rocks, squeezing through watery passages and willingly diving into jellyfish-infested seas. Chris, our instructor, is next up onto the ledge and, after guiding more than 200 coasteering groups along these cliffs, a simple feet-first jump is no longer a big enough thrill for him. Instead, he performs a showy back flip off the rock, gracefully entering the water with barely a ripple. The rest of the group takes turns to plunge into the waves. Once everyone has received a decent dunking we swim on, seeking out the next test of our nerves.

Coasteering has become popular all over the UK, but here on the scenic St Davids peninsula in southwest Wales, conditions are especially suited to the sport. As Chris explains, the area boasts cliffs facing to the east, south and west, so there’s always a coasteering route sheltered from the wind or, alternatively, for the more adventurous, a course that takes the full brunt of the weather. West Wales also experiences one of the largest tidal ranges in the world, which means routes across the cliffs change by the hour and a fissure that is high above the waterline in the morning can be submerged by the afternoon.

After a few more rock climbs and jumps from increasingly higher ledges, Chris discovers a tight underwater sump. With barely enough room to squeeze through when dry, now that it is underwater it offers a lung-bursting trial. Several members of the group back down from the challenge, but I step up to the narrow opening, take a deep breath and dive down. The salt water stings my eyes, making it hard to scan ahead. With my buoyancy aid and climbing helmet adding bulk, the channel is also a tighter squeeze than I’d first thought. I kick my legs hard in an effort to struggle forward, but my lungs quickly begin to burn, begging for air. A chunk of light comes into view, marking the end of passage, so I grab the walls of the cave to propel myself forward. Tiny, razor-sharp barnacles lining the cave walls slice into my palms, but I pay no attention to the pain and, with a final shove, power forward and upwards, breaking the surface for some welcome air. 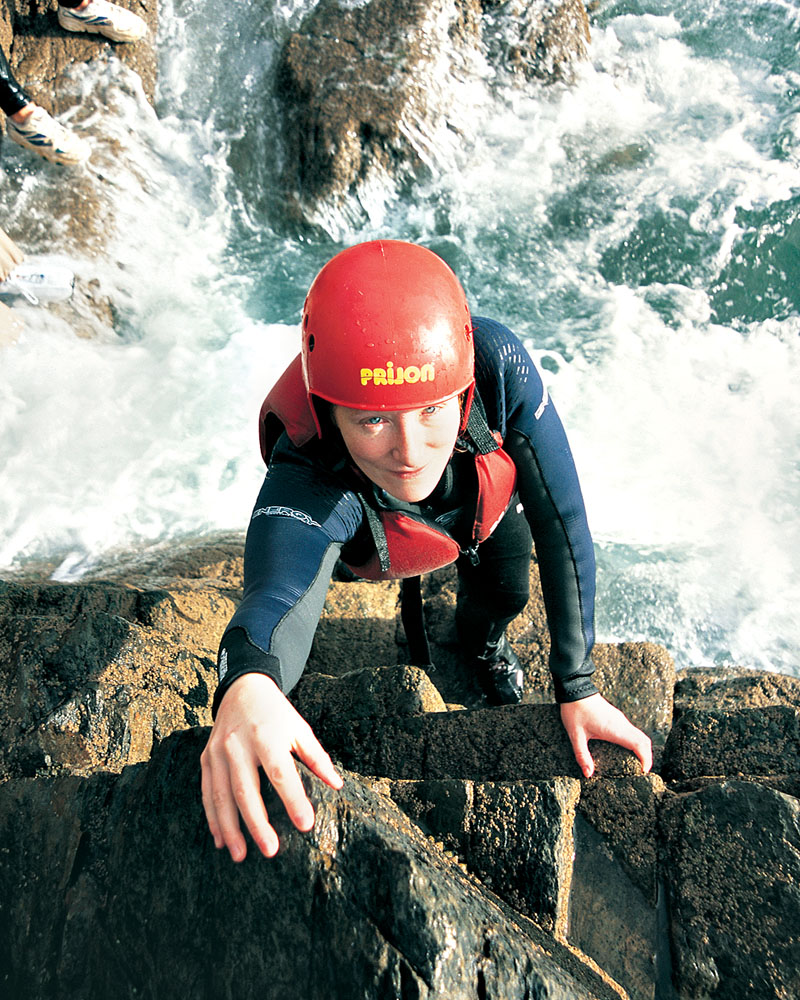 Our cliff run ends with a climb up an old smuggler’s trail to the clifftop, where we settle to assess the damage the barnacles have inflicted on our shoes and hands. The views here are spectacular, stretching far out over the Atlantic Ocean. The entire area is a protected national park and one of the best locations in Britain for wildlife spotting. Colonies of seabirds, including puffins, kittiwakes, gannets and guillemots, nest here before flying to warmer climates for the winter. Peregrine falcons swoop down the cliffs after small prey, Atlantic grey seals patrol the coastline and, further offshore, porpoises, dolphins and whales (including minkes, pilot whales and orcas) are often spotted making their way towards the Irish Sea.

The region’s wildlife has as much appeal as the adrenaline of its adventure sports. TYF, the organisation that runs the coasteering trips, recognises this with its strict environmental policy. Chris reports to us that all of TYF’s activities, including sea kayaking, rockclimbing and surfing, are conducted well away from breeding areas and sensitive wildlife zones, and close enough to the TYF headquarters that they can be reached by walking rather than driving. Battered shoes, chopped up by the barnacles, are kept and offered to future adventurers; old equipment is sold off or donated rather than thrown out; and upon returning to the base we discover TYF’s packed lunches are stuffed full of Fair Trade chocolate, locally grown apples and organic cheese sandwiches.

TYF’s eco-policy stretches further than its adventure activities. The group runs a store on St Davids high street selling eco-friendly gear and also operates Wales’s first organic-certified, carbon-neutral hotel, Twr Y Felin. The hotel, which inspired the organisation’s name, is a converted windmill that has retained its spiral staircase up to the peak of the original mill tower. Guests here have wind-up radios in their rooms, the bar is stocked with organic beers and wines and discounted room rates are offered to anyone who arrives by bicycle. 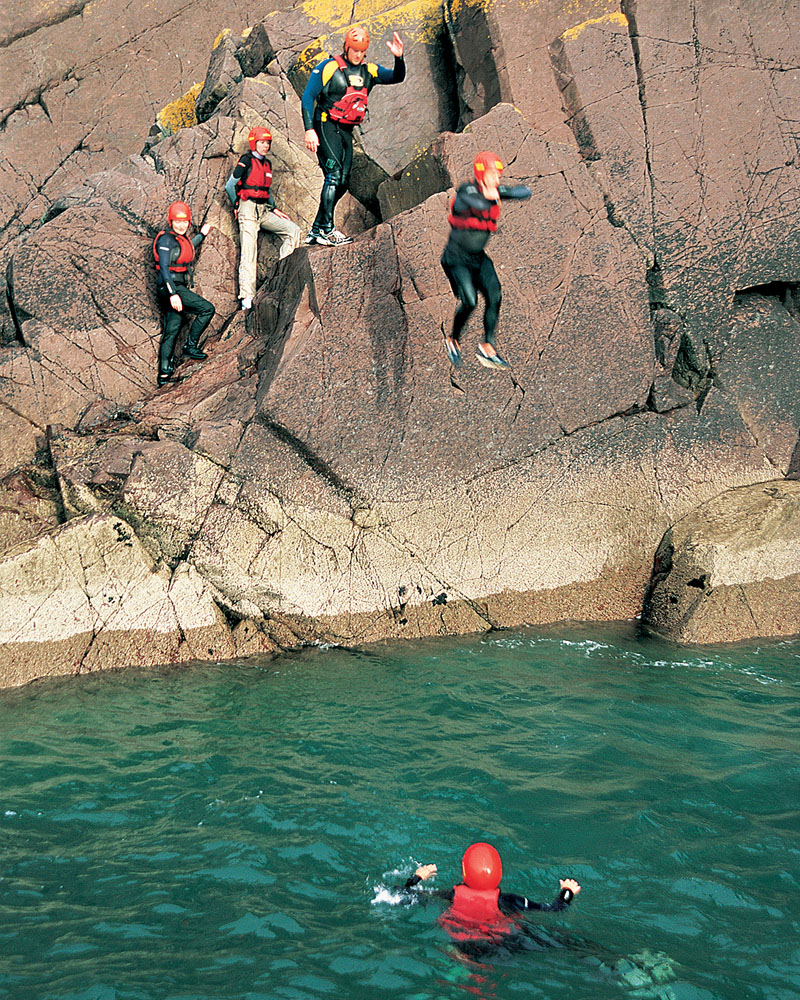 The founder of TYF, Andy Middleton, has also made it his mission to spread a green vibe throughout St Davids. He heads the eco-city project – an endeavour to make St Davids the UK’s first carbon-neutral city. St Davids has a head start over other cities in this enterprise. With a population of less than 2000, it is, in reality, a small village, complete with pastel-coloured cottages and a village hall. Rather than the smog of petrol fumes, the only smell hanging in the air is the tang of real ale wafting from the local pubs. St Davids’ status as a city is due to its cathedral – an imposing building that dates back as far as the twelfth century, built from vast blocks of stone hewn from nearby quarries. It was created in honour of Dewi Sant, the patron saint of Wales, who established a religious site here in the sixth century.

Despite its small size the city already boasts several green initiatives that would be the envy of larger cities. Drivers can fill up at a local bio-diesel fuel pump, the local surf cafe is powered by solar panels and wind turbines, restaurants and delis serve organic meat and veg, and a free minibus service, nicknamed the Puffin Shuttle, hauls surfers and tourists down to the beaches. It is this service that I take to head down to the nearby Whitesands Bay to experience another of St Davids’ green firsts – a trip on a bio-diesel-powered jet boat.

With the afternoon sun still high in the sky I wade knee-deep into the water to clamber aboard the banana yellow RIB – the same type of boat used on river adventures in New Zealand. After everyone has claimed a perch on the edge and donned vital waterproofs and lifejackets, we set off towards Ramsey Island, a wildlife reserve a couple of kilometres from the mainland. As soon as the boat hits deep water the skipper throws the throttle open and the jets blast. The only thing preventing me from flying overboard is my white-knuckle grip on a small plastic handle. After just a couple of minutes and several soakings from the high-octane twists and turns, I’m already as wet as I would be if I had fallen in.

Aside from a little fun, the purpose of our trip to the island is to spot some of the seals that dwell in the area. As we close in on a small cove, we hear the seals before we see them, their barking calls echoing off the cliff face. Thanks to the RIB’s onboard motors the skipper is able to glide close to the rocks without the risk of a propeller injuring any seals beneath the surface. My fellow passengers’ yelps of delight signal our first seal has been spotted. The mottled grey head peeks out above the water, staring at us with as much interest as we have in it.

Like TYF, the boat crew has a strict policy of not disturbing the seals, especially during the breeding seasons. As we tour the nooks and crannies of the island, the skipper provides a short lesson on marine life, natural history and wildlife conservation. Before we return to Whitesands Bay, we stop to meet the Bitches – a cauldron of bubbling, churning rapids that stretches between the island and the mainland. While the Bitches were so named on account of the high number of shipwrecks they have caused, kayakers and surfers now seek them out to test themselves on waves of up to seven metres. Such is their power the annual Bitches Rodeo has become one of the UK’s most demanding whitewater events. The channel may yet serve as the site of Britain’s first tidal power generator – a possible solution to the clean energy desires of St Davids.

I arrive back on shore with the prospect of kitesurfing, cycling and hiking ahead of me. I’m not alone. St Davids has become a magnet for green thrill seekers and the city’s population swells each summer with adrenaline hunters. The eco-friendly theme isn’t restricted to the west coast. It may only be a few hours from London, but the proud country of Wales is establishing itself as a clean and green adventure playground for all ages. St Davids is a great place to begin your Welsh ecoadventure. You will also have considerably less trouble pronouncing its name than the town of Llanfairpwllgwyngyllgogerychwyrndrobwllllantysiliogogogoch.

Qantas flies from most major Australian cities to London. St Davids has no rail or coach station of its own so catch a National Express coach or train to Haverfordwest, and from there take a local shuttle bus into St Davids.
qantas.com

TYF runs half-day, full-day and weekend activities, most of which can be booked online. All safety equipment is provided, but bring along an old pair of trainers and a dry change of clothes.
tyf.com 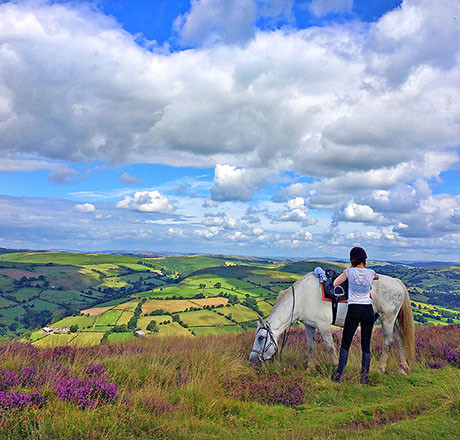 Climbing into a saddle is a befitting way to exploring a...

Climbing into a saddle is a befitting way to exploring a rugged country steeped in history... 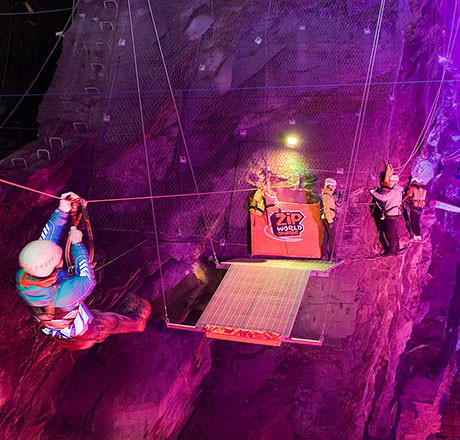 Venturing below the earth’s surface may not conjure thoughts...

Venturing below the earth’s surface may not conjure thoughts of soaring vast distances... 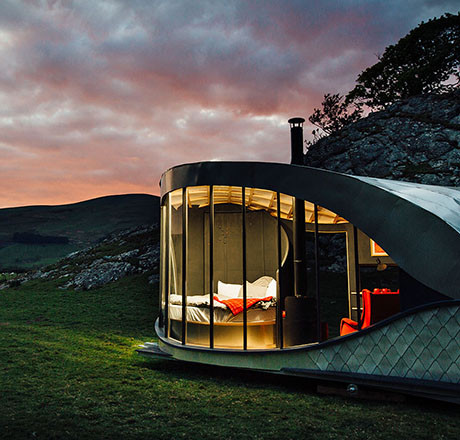 There are some amazing sights to be seen in the UK, however...

There are some amazing sights to be seen in the UK, however Wales often gets overlooked.... 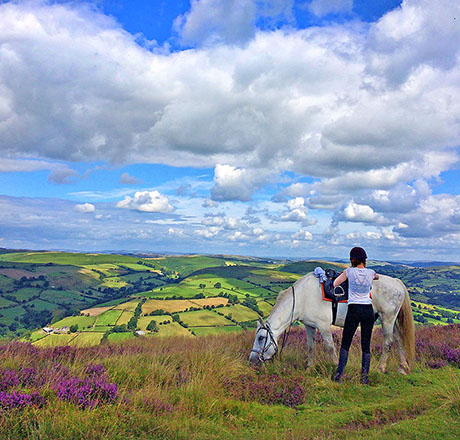 Climbing into a saddle is a befitting way to exploring a rugged country...

Climbing into a saddle is a befitting way to exploring a rugged country steeped in history... 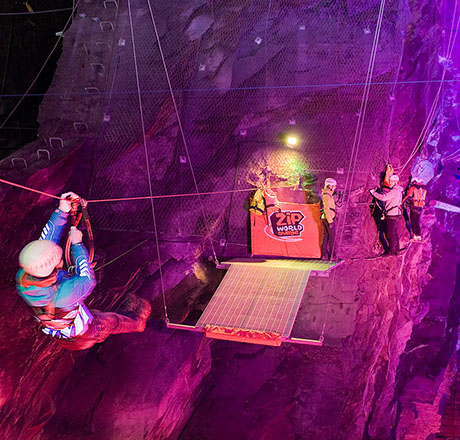 Venturing below the earth’s surface may not conjure thoughts of soaring...

Venturing below the earth’s surface may not conjure thoughts of soaring vast distances...

There are some amazing sights to be seen in the UK, however Wales often gets...

There are some amazing sights to be seen in the UK, however Wales often gets overlooked....