Mysteries of the Moche

Mysteries of the Moche

In 2005 the body of a wealthy Peruvian woman was found buried deep in the desert dust outside Trujillo in northern Peru. She was heavily tattooed (smiley faces, hearts, snakes), her nose pierced, her hair long and braided. Next to her body was a cache of weaponry and elaborate jewellery. The discovery sparked a great deal of interest, not only in Peru but around the world. Her body remains on display today, a short walk from its original resting place, where, for a modest fee, you may view its sombrely lit reflection and ponder its significance and your own place in the grand scheme of things. It’s 1700 years old.

If fortune is smiling your way, your visit to the Lady of Cao may coincide with some free time and a congenial mood from the man who discovered and excavated her tomb, Professor Regulo Franco Jordán. The stout Peruvian archaeologist greets our small Australian tour group outside the Museo De Cao and personally escorts us through its riches, answering questions via a translator. By now, three days into our tour of northern Peru, we are acclimatised enough to savour the opportunity. Already we’ve grasped the core interest of this under-sung region: the history here is vivid, blood-soaked and it is still, quite literally, being unearthed.

Days earlier we’d begun our tour further south, exploring the Temple of the Moon, which once overlooked the bustling capital of the ancient Moche civilisation. Buried by dust storms, scoured by erosion and its prodigious wealth diminished by centuries of tomb raiders, the temple somehow manages to remain an impressive monolith. Nearby stands what’s left of the larger, older and even more raided Temple of the Sun, said to be the largest manmade construction in the Pre-Columbian Americas. Both are still active archaeological digs. Although no longer much to look at, the sheer size of these structures is a fitting tribute to a civilisation that lasted twice as long as the Roman Empire and five centuries longer than the Inca reign that replaced it. 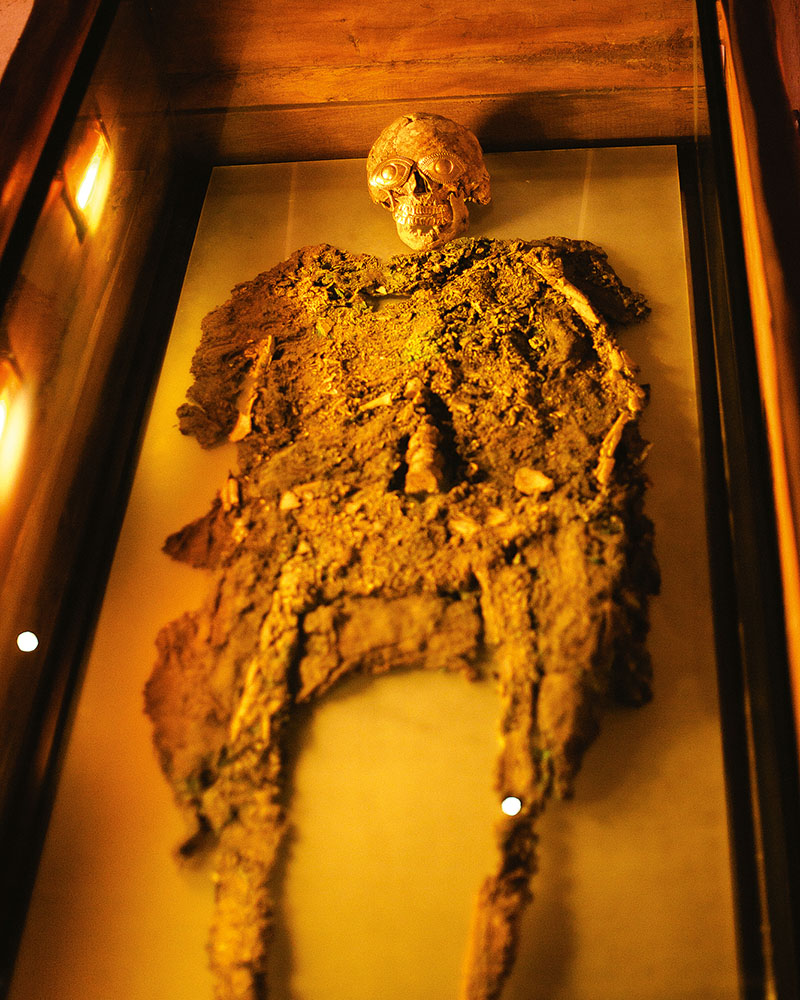 Exhibit in the Royal Tombs Museum of Sipán. Click to view gallery

Who were the Moche people? Doers and optimists, evidently. Beginning around 100AD, a collective of mountain-god–fearing, temple-fixated people arrived in northern Peru – probably by sea from Ecuador – and began transforming an exceedingly unpromising expanse of moonscape into a productive, highly sophisticated civilisation. We know this and much more about Moche society from the stories brought to life by their artisans in thousands of pieces of exquisitely crafted pottery, jewellery, wall paintings and ceramics. We know, to pick just three examples,  they had a thing for blood sacrifice, fellatio and fishing. And yet, there is so much that remains a mystery, so much still to discover, which is why the region attracts archaeologists from across the globe.

Archaeology is not the break-neck business of car chases, snake-filled tunnels and whip-cracking American heroes of Spielberg films and boyish imaginations. It is the painstakingly meticulous business of survey maps, academic research, packed lunches, and years and years of digging with increasingly smaller shovels until you find yourself 20 feet down a precariously supported shaft – sun-blasted, dirt-embedded, a stranger to your family and friends – scraping away at the earth with a toothbrush, wearing the fixated grimace of an obsessive compulsive.

That noted, there is something about excavating dusty pottery and adobe foundations in the Peruvian desert – however slowly and laboriously – that is massively enticing. For one thing, there is no shortage of work. Moche-era temples (known as huacas, pronounced waccas) dot the landscape like ant hills. There are hundreds scattered between the ocean and the Andean foothills. Our guide informs us that only between three and five per cent of them have been properly excavated. That’s a lot of dirt to be toothbrushed away. The biggest and most significant huacas resemble eerily quiet construction zones, but with heavily armed security guards and an abiding paranoia about photography. 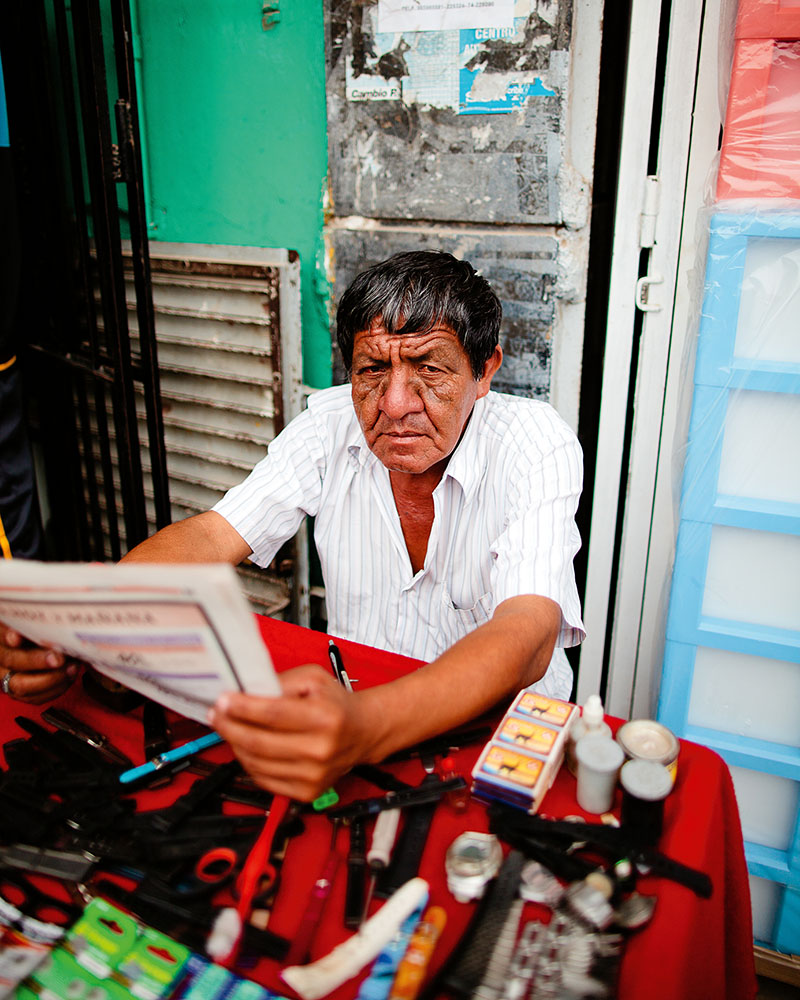 A street vendor at Chiclayo. Click to view gallery

Grave robbing has been a popular pastime in Peru, probably for centuries. Some sites we visit are pockmarked with shallow ditches and filled-in shafts. Temptation has diminished, but there is still gold and jewellery to be found, as well as ancient mummies and precious artefacts to be disturbed. At the Museo de Cao, Professor Franco Jordán explains it was a grave robber who led him to the Huaca Cao Viejo, where he later made the discovery of his career, the astonishingly well-preserved Lady of Cao. It took his team months to carefully remove and unwrap her body. The discovery has been compared to the unearthing of King Tut’s tomb.

So here we are at one of the most significant ancient historical sites in all of the Americas and the strange thing is that, besides our local guide, the professor, a heavily armed security guard and a magnificently bored gift-shop attendant, we are alone. Who does the Moche Trail in northern Peru? Judging by the visitors’ books very few non-Peruvians – those who aren’t from here are mostly German. As our nine-day excursion ticks away, I start to notice the absence of European faces. The Gringo Trail in southern Peru is well marked (Cusco, Machu Picchu, Lake Titicaca and Lima), but in the north we are off-roading.

To clarify, I mean off-roading in a purely metaphorical way. I am part of an organised tour and we are accommodated in comfort and style. A lavish three-course meal and a plucky pisco sour are never far away. Our itinerary includes just as many modern gastronomic highlights as it does ancient sites. Peruvian cuisine, I’m thrilled to discover, has undergone a renaissance of late. Forget trussed guinea pig. Think of the flavours of ceviche, fresh, delicate raw sea bass ‘cooked’ in lemon and lime juice. Or the temptation of a dessert promisingly titled, the Sigh of a Woman from Lima. 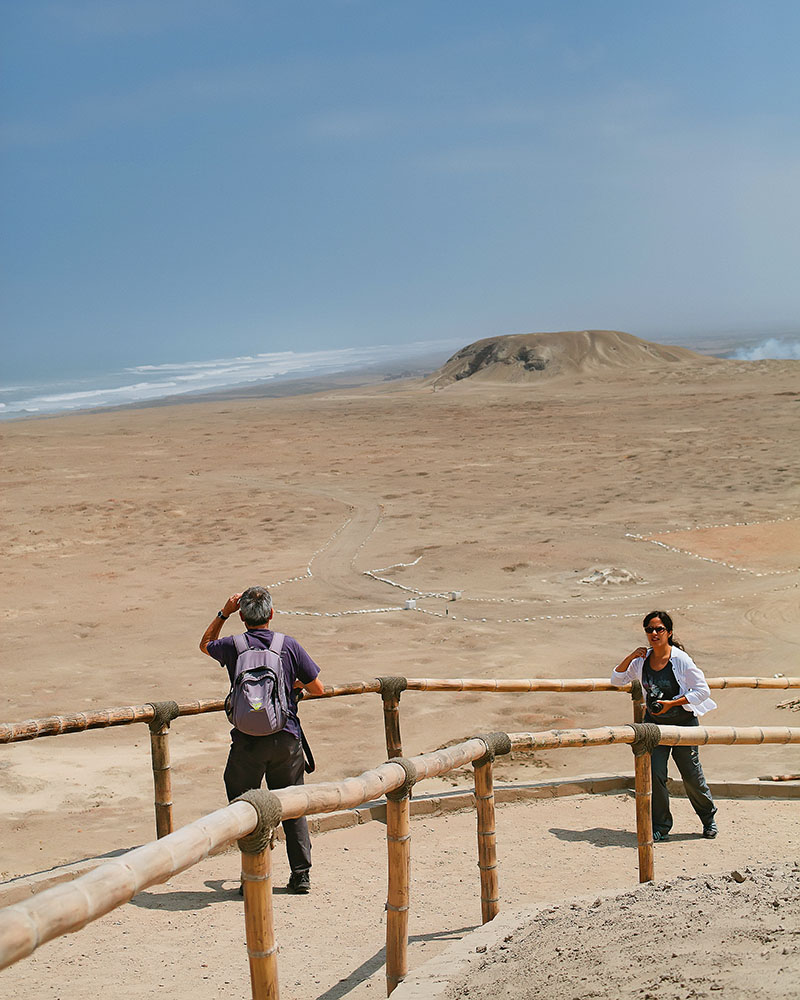 Scaling the crumbling pyramid of Huaca Cao Viejo where 1700-year-old mummy, the Lady of Cao, was discovered in 2005. Click to view gallery

Still we are certainly on a road less travelled, which has advantages. There are no queues for museums or historical sites. No busloads of students photobombing our precious snaps. Prices are set at local rates. Crude and repetitive butcherings of the Spanish language are patiently encouraged. The fact that we are Australians and that Australia does indeed have kangaroos is a talking point in the markets and bars. More than anything else, the absence of mainstream tourism encourages immersion in our surrounds.

Historical tours can be dry and repetitive – how many old buildings do you need to visit to establish that they are indeed old and still standing? There’s a temptation to see only the most visually impressive (and Machu Picchu stands tall and perhaps even unrivalled in this category). Be advised that the huacas of northern Peru are not visually impressive. They are not even impressively visible. You could drive right by three or four of them and not even know they were there. The upside is that the Moche route requires your attention. You need to go beyond the surface.

If you’ve a curious mind there is much to marvel at with the still-unfolding story of the Moche civilisation. If not, there’s enough sex, death, war, nudity and drug use to hold your attention. In Lima’s Museo Larco the pottery engravings are so sexually explicit and enliveningly graphic they are kept in an adults-only gallery. Depictions of highly ritualised human sacrifice involving gruesome torture and the imbibing of a hallucinogenic cactus to appease a god known as the Decapitator are a frequently occurring motif. Immensely impressed with these details, I find the Moche culture comes to life. I begin to think there might even be the bones of a HBO series buried out there in the desert somewhere. 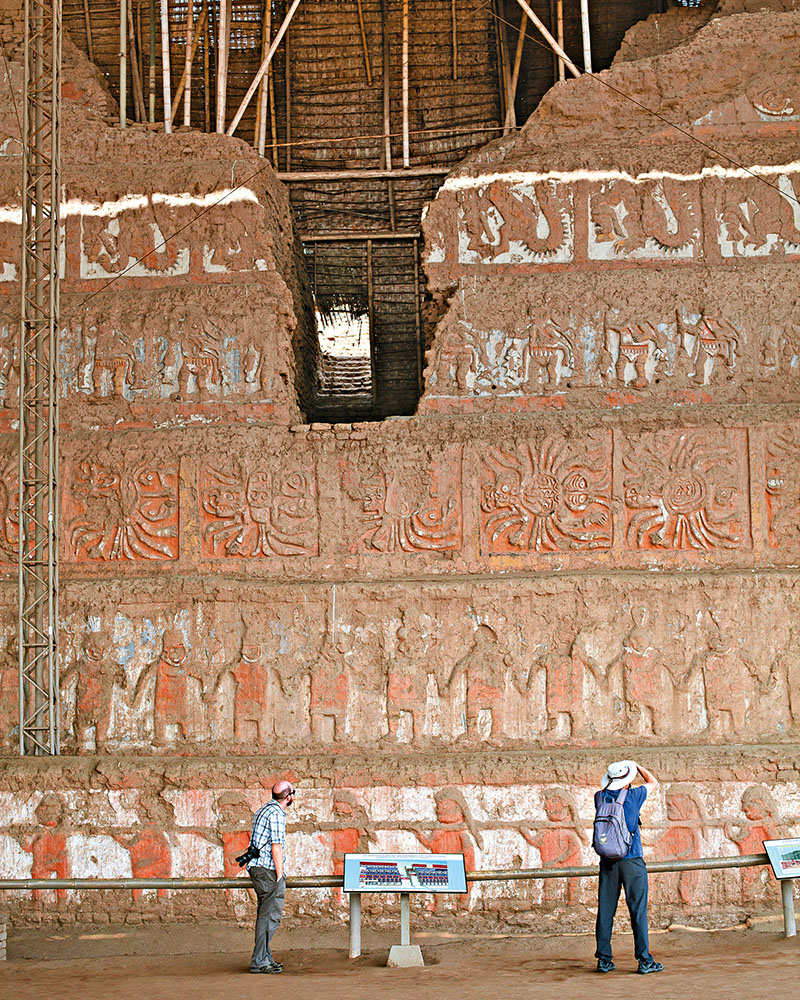 Travellers enjoy the Temple of the Moon minus the tourists. Click to view gallery

When we aren’t exploring dusty temples and gleaming museums dotted between Trujillo and Chiclayo, we enjoy lazy lunches by the sea in a succession of colourful fishing villages. After one such meal in Huanchaco I recognise the familiar appearance of my own caste: that sun-bleached, work-shy, pleasure-loving creature, the travelling surfer. Northern Peru is famous for its long-wrapping point waves, none more so than nearby Chicama, which is regarded as the longest and most wrapping in the world. How I long to join them for six months or more.

Surfing is big in Peru. Some Peruvians even suggest surfing actually began here, not in Hawaii, as is commonly believed. They stake their claim on the use of the caballito de totora (little reed horses), handmade fishing vessels also used for catching waves and which date back some 4000 years. I wasn’t going to miss the opportunity to ride one, however ungainly they appeared.

I hired a wetsuit and borrowed a caballito from Lucio, a friendly local fisherman. Earlier he had put on a commanding wave-riding display for our tour group while I rode beside him on a malibu. My efforts on the reed craft were less successful, but I managed to catch one tiny wave. For a few seconds, as I glided to shore before abruptly capsizing, I enjoyed a rare physical insight into what life must have been like for the Moche people as they went about their daily lives alongside the baking desert, with the fearsome mountain god looming in the distance.

An exciting but precarious existence was the lasting impression.

The Moche Route typically begins in Trujillo and explores the major archaeological sites and Moche museums scattered across the northern coastal desert. Be PERU offers tours to the coast.
beperu.com 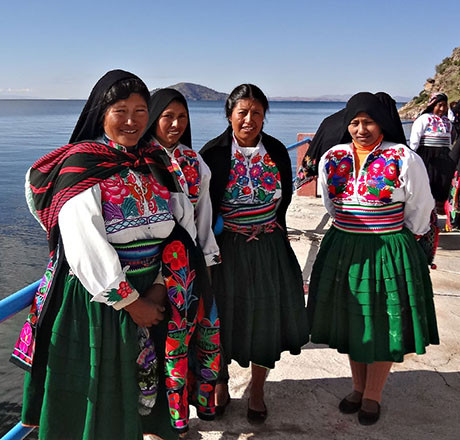 Long believed to be the birthplace of the Incas, your...

Long believed to be the birthplace of the Incas, your exploration of the mesmerizing Lake... 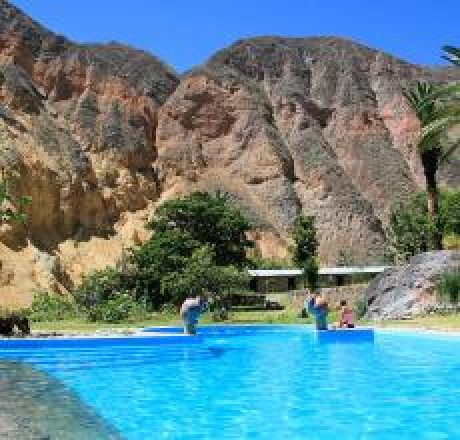 The Colca Canyon is one of the deepest in the world (twice as...

The Colca Canyon is one of the deepest in the world (twice as deep as the Grand Canyon, in... 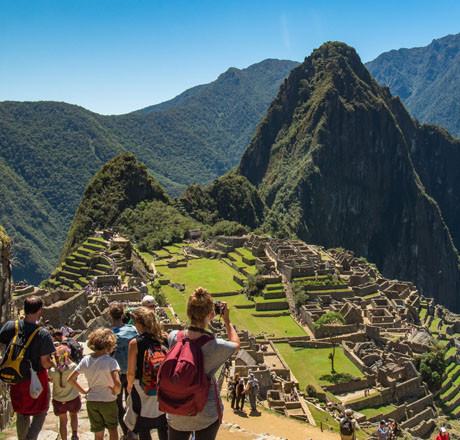 If you go to Peru, but don't visit Machu Picchu, did you...

If you go to Peru, but don't visit Machu Picchu, did you really go? We're all for getting... 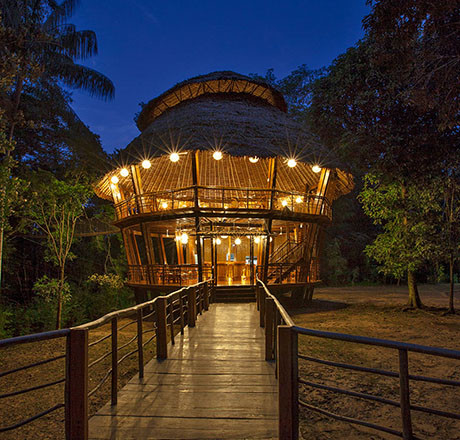 Ever imagined what it must be like way up high in the treetops...

Ever imagined what it must be like way up high in the treetops of the Amazon? This... 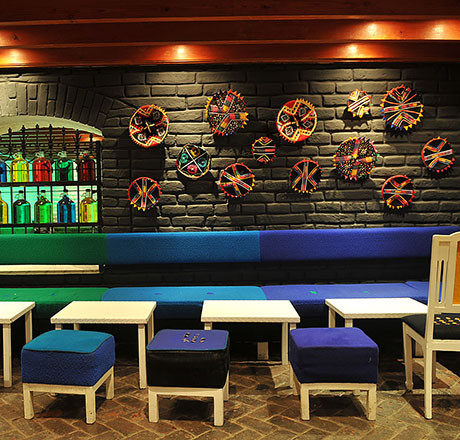 drink
Get hazy at...
Get hazy at this South American mansion
LIMA, PERU

Before you get too excited, be aware that the house specialty...

Before you get too excited, be aware that the house specialty at Barranco's Ayahuasca... 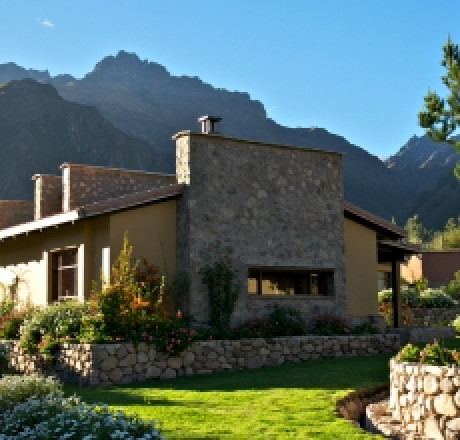 When you want to explore the famous Sacred Valley while...

When you want to explore the famous Sacred Valley while enjoying the finer aspects of... 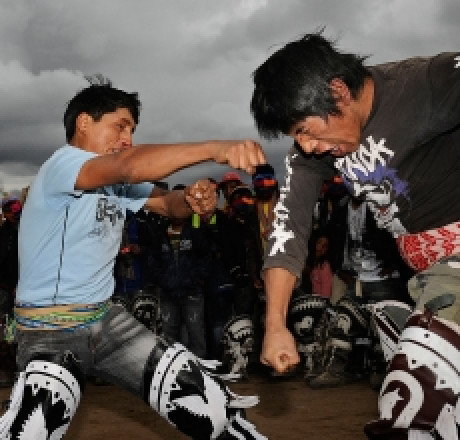 Peruvians prefer to work out their differences head-on, and...

Peruvians prefer to work out their differences head-on, and there’s no better time to... 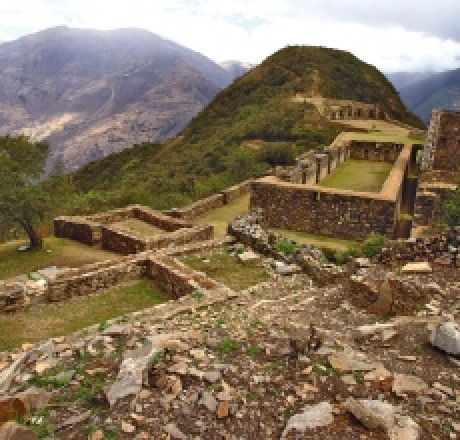 do
The Incan...
The Incan ruins of Choquequirao
ANDES, PERU

There’s no denying Machu Picchu is a stunning sight, but...

There’s no denying Machu Picchu is a stunning sight, but with thousands of visitors... 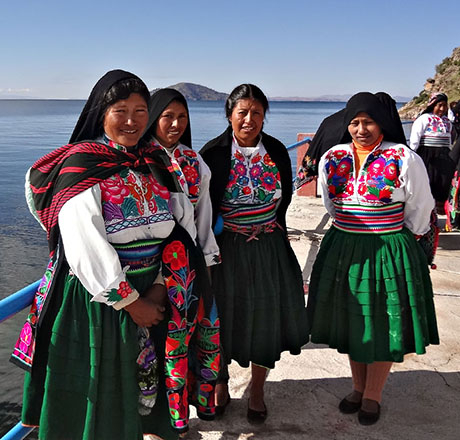 Long believed to be the birthplace of the Incas, your exploration of the...

Long believed to be the birthplace of the Incas, your exploration of the mesmerizing Lake... 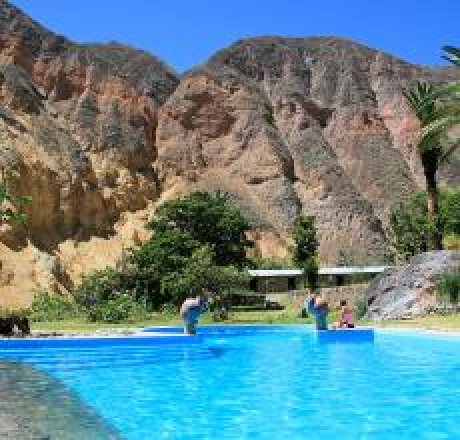 The Colca Canyon is one of the deepest in the world (twice as deep as the...

The Colca Canyon is one of the deepest in the world (twice as deep as the Grand Canyon, in... 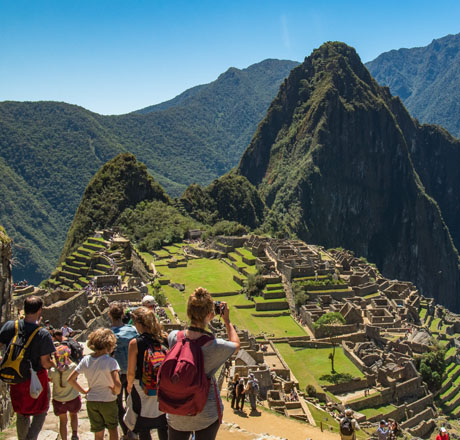 If you go to Peru, but don't visit Machu Picchu, did you really go? We're all...

If you go to Peru, but don't visit Machu Picchu, did you really go? We're all for getting... 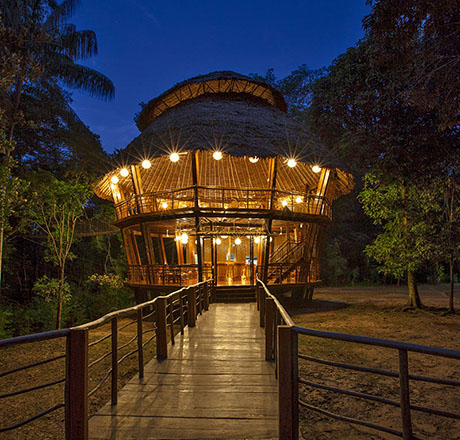 Ever imagined what it must be like way up high in the treetops of the Amazon?...

Ever imagined what it must be like way up high in the treetops of the Amazon? This...