Sleeping with the Anemone

Sleeping with the Anemone

Tom Perry travels to the tiny remote Solomons’ island of Bellona, where men are men, caves are hotels and crayfish are plentiful.

It’s the social event of the week and I can’t decide if I’m the gatecrasher or the guest of honour.

Our twin-engine plane lurches its way to a stop on the tiny coral atoll of Bellona, the stairs come down and I step out onto the grass. I look ahead. It’s 7am, and there’s an entire village staring at me. I turn to my host, Joses Tuhanuku, who grew up on Mungiki – as Bellona is known in the language of its inhabitants – but now lives in the Solomon Islands’ capital, Honiara.

“Why is everyone here?” I ask Joses, who has joined me to show me around his island home for a few days. He doesn’t answer. Joses is already deep in conversation with friends and family members. But there are no hugs, no big smiles or slaps on the back. Joses is a traditional chief here and was Bellona’s member of parliament for more than a decade. He and the men talk in discreet undertones, only interrupting their conversation to direct children to help collect the bags.

Joses’ wife, Australian journalist Mary-Louise O’Callaghan, who lived here on Bellona with their four children for 18 months almost a decade ago, sees my confusion and laughs. “This is the social event of the week,” she tells me with a chuckle. “It’s when most of the island’s business happens.”

She explains that with little electricity, and certainly no phone coverage, Bellona and its inhabitants exercise an unusual bush telegraph. If one of the islanders needs to get a message out, contact someone, or just find out the latest news, they come to the airport for the twice-weekly flight from Honiara – mostly because everyone else will be there too. “Sometimes you just want to know what’s happening in the community,” Mary-Louise says. “So you come to see the flight.”

As we begin our walk down Bellona’s solitary road, the significance of the plane’s arrival makes me realise just how cut off we really are. There are no cars here, only a few clunky pushbikes that are shared by everyone. Services are primitive, and Bellona is a 90-minute flight from Honiara. Flights are frequently cancelled or simply don’t show up at all. For most people, the best option to get to and from the capital is the more affordable overnight journey by ferry, which provides much of the island’s lifeline of food and other essentials. But even that hasn’t made the journey south in over a month. As far as Pacific islands go, Bellona is up there with the most remote.

Even by Solomons’ standards ­– the country is famous for stories of head-hunting and brutal conflicts – the residents of Bellona have a pretty formidable reputation. As one of the few Polynesian islands in this predominantly Melanesian country, Bellonese people are staunchly protective of their culture and wary of domination by outsiders. The tattoo art from Bellona is considered some of the best in the Pacific, with many men decorating their whole chest and back, leaving only a clear line across the chest, known as taukuka, which is said to be a portal for communicating with the god Tehuaingabenga: the legendary warrior of the Avaiki people. 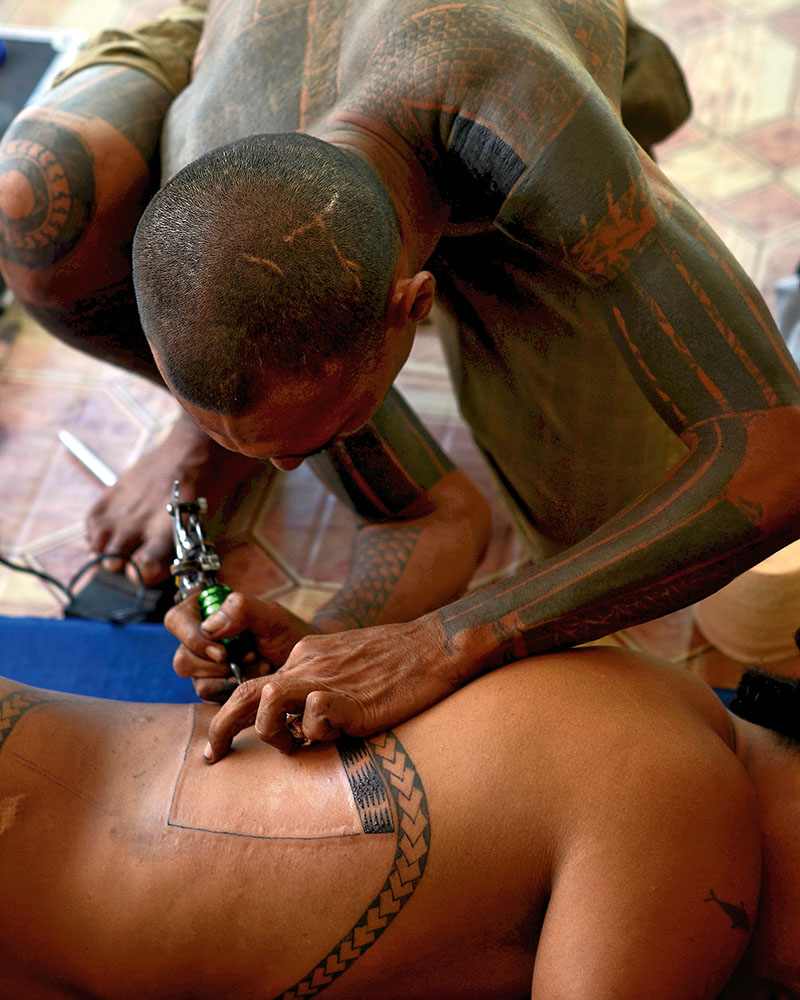 Bellonese body art is considered some of the best in the Pacific. Click to view gallery

On arrival at Mary-Louise and Joses’ Bellona home, a stone oven-cooked meal of chicken, fish and vegetables is already sitting on the table, delivered by family members who’d heard we were on our way. It’s a pleasant example of the strength of the community here.

With a full belly, I head for a quiet stroll along the island’s single road. I exchange nods with a few passers-by, and I watch kids with slingshots trying in vain to hit flying foxes, which are considered a delicacy around these parts. Strangely, however, no one seems particularly interested in me. And that’s not my damaged ego talking. It’s just that having lived in the Solomons for some time, as an outsider, I’m pretty used to large packs of kids watching or following me at any moment. But here on Bellona, I get a half-concerning, half-refreshing sense that everyone here already knows me.

Returning to the house that feeling is amplified. I see a man sitting at a table outside, seemingly waiting for someone to come out. I call out to Joses and Mary-Louise to let them know there’s someone waiting, but don’t hear a response. He lifts his hand, indicating to me that he’s happy to wait, before he casually says: “You must be Tom.” For a second, I’m puzzled. “We heard you arrived this morning.”

The following day, I join Joses, Mary-Louise and their kids for the walk to Aotaha, a large cave on the island’s eastern corner where we’ll be spending the next few days. Despite being no more than 10 kilometres long, the island’s atoll shape (high cliffs on all sides, and a flat valley in the middle) means that none of the nearby sea air reaches us, making the walk oppressively hot. It feels as if we’re walking inside a big, steaming bowl. We amble along the slippery path for an hour, stopping to chat to the occasional bike-riding passer-by. But again, instead of the usual “where are you from?” or an inquisitive look, I get a mix of respectful nods, disinterest or the standard “Halo”.

As we near the cliff tops and the path steepens, the mood shifts. Waves come faintly into earshot, the air cools, and with new-found energy we bound our way up a series of broken rock paths before reaching the island’s edge. Staring out at neighbouring Rennell Island from this 70 metre high vantage point, you can’t help but puff out your chest like a Polynesian demigod taking in your newly-conquered territory. Emboldened with a sudden sense of purpose, we begin the climb down a series of bamboo ladders to reach the caves below.

With Bellona often hit by wild cyclones, the Aotaha caves have provided shelter to local families for centuries. And once I step in for a closer look, I understand why they became such a valued retreat. The 20 metre wide cave, complete with six beds and a naturally formed private grotto, is like a secret bunker. This is seclusion the way nature intended it to be. 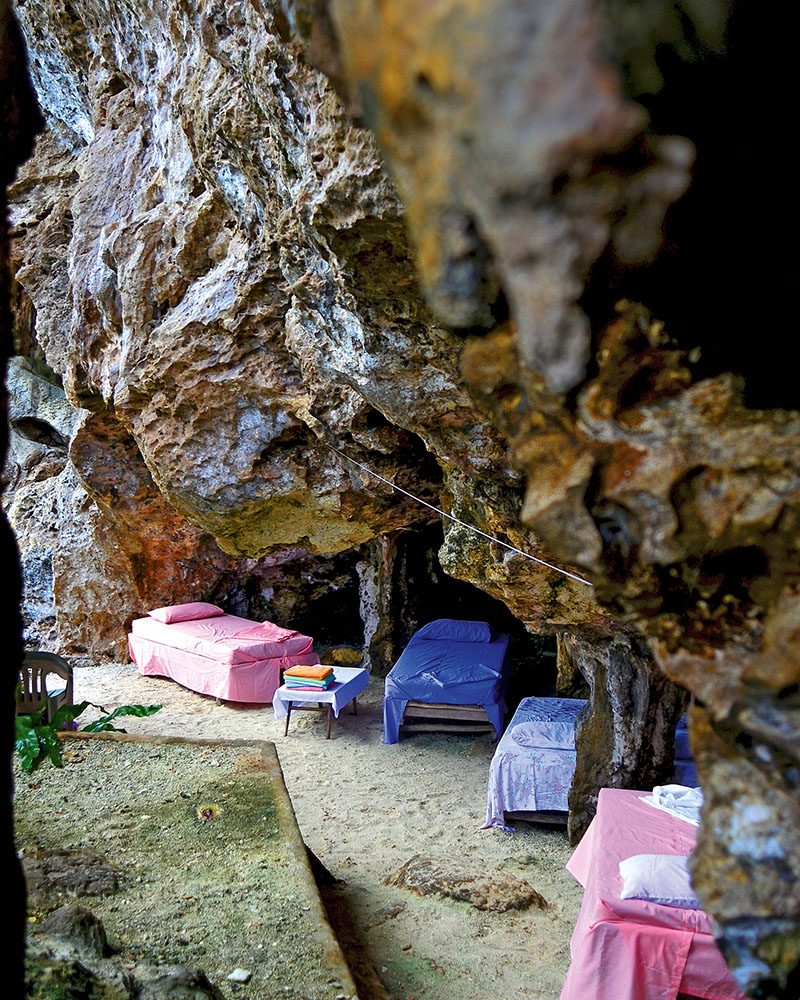 Yet it’s not until later that evening that I come to realise just how ideal a spot this is to be marooned. At sunset I hear someone outside the cave shout “crayfish, crayfish!” We all emerge from our various cave nooks to see the red flash of a platter of massive crays being placed at the centre of our dinner table. As it turns out, the rock pools surrounding the cave are teaming with massive crayfish. They are popular with only half the island’s population, as the other half are Seventh-day Adventists and don’t eat shellfish. I briefly consider the religious implications of my actions as I inhale a huge chunk of perfectly white, fleshy goodness, but the thought quickly evaporates as empty shells pile up on my plate.

The next few days are a satisfying constant: swim, nap, eat cray, sleep under the moonlight. Repeat. But it’s not until our final night at Aotaha when we come to appreciate just how special these caves really are. I spend much of the night hearing ancient battle legends and being convinced to get a Bellonese tattoo, and then a storm suddenly arrives with unexpected speed. Waves pound the cliff walls, salt spray moves in, and within 30 minutes a classic tropical storm is sitting right on top of us.

We all retreat to the sanctuary of our cave. Underneath the pounding fury of this huge storm, we slump back into our beds, prop our heads up with pillows, and enjoy the show. The thunder, lightning, winds and rain turn it on, and we all howl loudly, daring the weather to become even more ferocious. When you’re this remote, and the week’s biggest social event is the arrival of a light plane, this is the local equivalent of IMAX.

Solomon Airlines flies from Brisbane to Honiara with connections to Bellona.
flysolomons.com

Aotaha Cave Lodge costs US$56 per person, per night, including meals.
facebook.com/AotahaCaveLodge 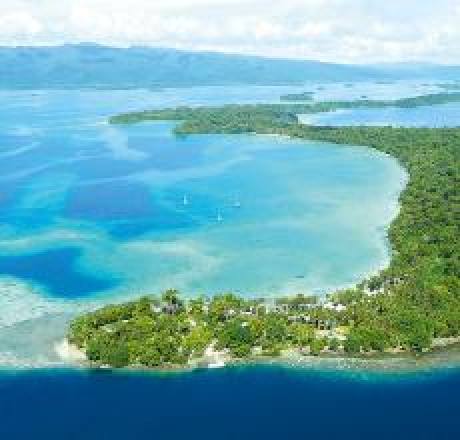 This little tropical getaway is situated at the edge of the...

This little tropical getaway is situated at the edge of the longest lagoon in the world,... 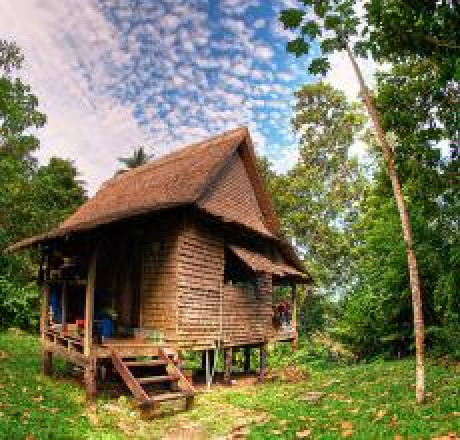 Known as a ‘conservation jewel,’ Tetepare is a unique,...

Known as a ‘conservation jewel,’ Tetepare is a unique, locally owned and managed eco... 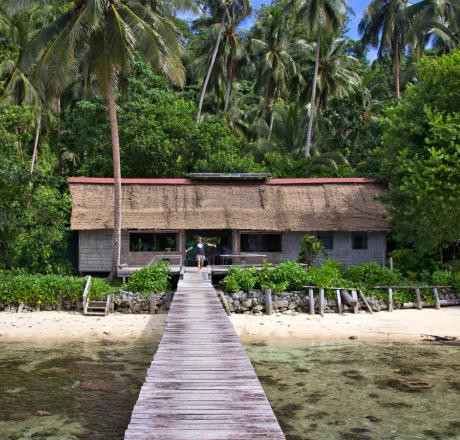 Get back to nature on Gatokae Island in the Solomons' Western...

Get back to nature on Gatokae Island in the Solomons' Western Province. The wonderful... 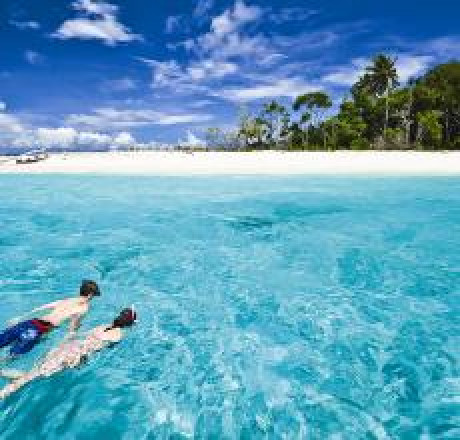 The owners of Papatura Island Retreat fell in love with the...

The owners of Papatura Island Retreat fell in love with the Solomons on a trip one year... 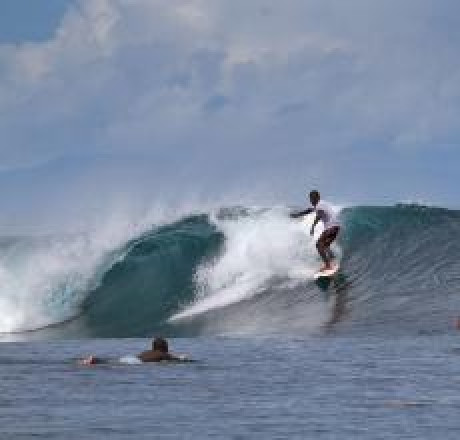 Only a short drive from Gizo and a quick paddle off a...

Only a short drive from Gizo and a quick paddle off a postcard-perfect, white sand... 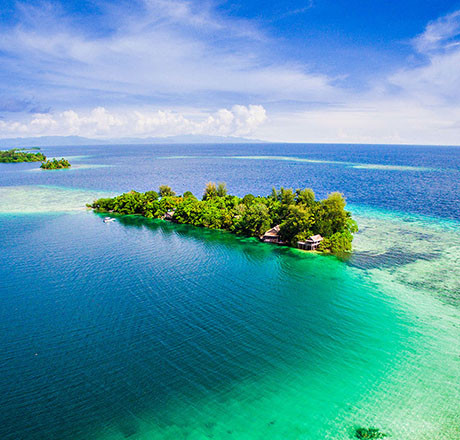 stay
Your own...
Your own private island at Oravae...
GIZO, SOLOMON ISLANDS

If you've ever dreamed of disappearing to your own Pacific...

If you've ever dreamed of disappearing to your own Pacific island with just the sound of... 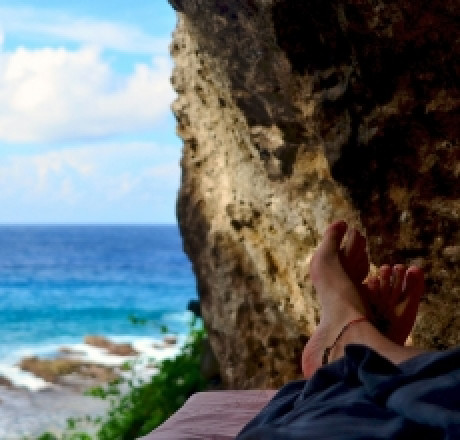 Enjoy a memorable night as you sleep in a natural cave halfway...

Enjoy a memorable night as you sleep in a natural cave halfway down a cliff face in the... 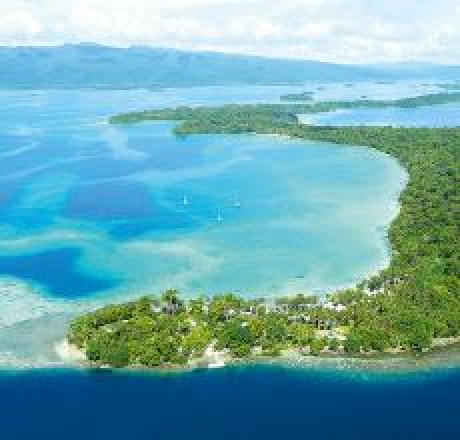 This little tropical getaway is situated at the edge of the longest lagoon in...

This little tropical getaway is situated at the edge of the longest lagoon in the world,... 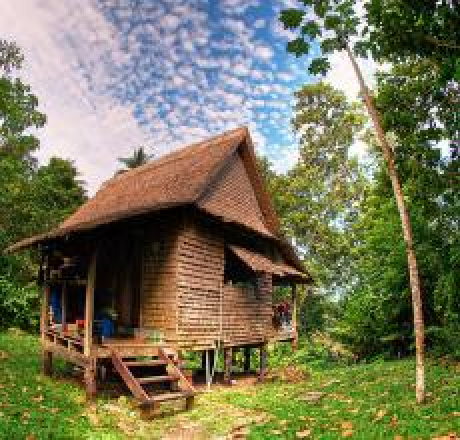 Known as a ‘conservation jewel,’ Tetepare is a unique, locally owned and...

Known as a ‘conservation jewel,’ Tetepare is a unique, locally owned and managed eco... 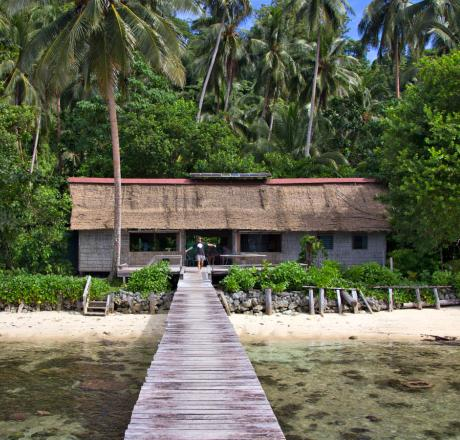 Get back to nature on Gatokae Island in the Solomons' Western Province. The...

Get back to nature on Gatokae Island in the Solomons' Western Province. The wonderful... 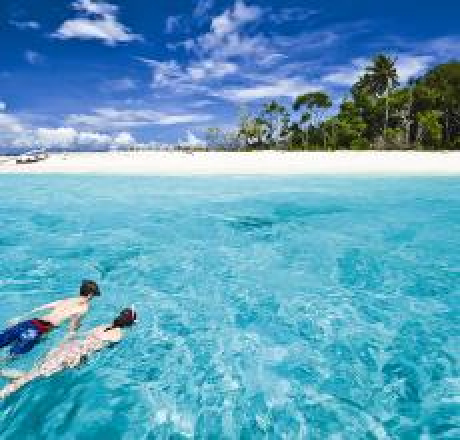 The owners of Papatura Island Retreat fell in love with the Solomons on a...

The owners of Papatura Island Retreat fell in love with the Solomons on a trip one year...