View Map
A beach all to yourself is what you can expect on the Corn Islands. Image: Flash Parker

On twin Caribbean isles, Flash Parker discovers the type of tropical paradise most of us believe disappeared long ago.

Imagine I’m a tiny painter and I live inside your brain. I’ve placed a pochade box on the bulge in your frontal lobe and set up my easel against your hypothalamus. With my tiny brush I paint puffy clouds of paradise, ultra-chromatic ocean waves and sandy beaches onto your olfactory cortex, so you can smell the sea while you stare blankly at your computer screen for eight hours a day. It’s my duty to transport you to cerebral Eden while you’re gripped by the maddening mundanity of the everyday. You rely on me to take you to faraway places, but now and then the fantasies I brush into existence are so inspiring they have you dusting off the pages of your old high school atlas in a desperate attempt to transform the ethereal into something less fleeting.

As you open the passage to geographic bliss, I splash coconut water onto your Wernicke’s area and you flip to the Caribbean islands. A dab of green for untrammelled jungle and splashes of sapphire for the ocean unexplored, and soon you’re folding over page after page, past the everyday islands and into the uncommon Caribbean, onto the paradises of the Mosquito Coast, where the atlas shows no roads, no cities and no limits to what you may experience. I’ve painted you a picture of Nicaragua’s Corn Islands, one of the Caribbean’s best-kept secrets, and a destination even more remarkable than imagination itself.

Adrenaline heightens each of your senses as your eight-seater twin prop buzzes like a mosquito over the sandy mound of Big Corn Island, some 70 kilometres removed from mainland Nicaragua. Not long ago, the Corn Islands hardly registered as a blip on the tourist radar. One flight per day landed on the grassy runway, while intrepid backpackers and the hippie set tied their luck to cargo ships on the gruelling 16-hour journey from Bluefields. Rustic beach huts housed most of the beds, while extended services were limited, if not non-existent. Yet word of mouth has transformed Big Corn into a checklist destination, the sort of place you want to brag about to your friends, no matter how badly you want to keep the secret to yourself. Today, the Corn Islands boast a few upmarket accommodation options, but the sense of the unexplored remains.

As your plane descends, a vision of stark white sand takes shape in your cerebellum, and knocks you off your feet. As you slip into a well-worn hammock on Picnic Beach, one of the longest, widest stretches of sand you’ll encounter in the Caribbean, you realise this is the island escape you’ve envisioned all your life. The pomp and circumstance associated with top-of-mind destinations is non-existent here, which contributes to an irresistible sense of charm and peace. Wide-smiling locals provide free haircuts to coconuts along the beach, happy to share their spoils with you. Young men patch and paint fishing boats near the harbour, keen to take the adventurous out onto the ocean, while groups of school children, most of whom have never left the island, quiz you on baseball stats and pop songs, interrupted by the occasional intrusion of a nervous lizard. It’s all so very Paul Theroux.

Picnic Beach is buttressed by the Arenas Beach Hotel, which has rows of white cabanas and a shipwreck-cum-beach bar on the sand. Rum libations begin at $2.50, while big bottles of beer cost about the same. The hotel itself, set back from the beach just across the road, features rustic bungalows with wide porches and deep hammocks, and simple rooms and suites flecked with Caribbean decor. No one will blame you if you decide to stick a flag in the sand and claim a stretch of beach for king and country, although there’s plenty more to stimulate the senses on Big Corn. Don’t be surprised if, as the sun goes down and the stars come up, you’re invited to the Coconut Banger’s Ball on Picnic Beach. Here, locals and visitors come together, crack coconuts, pour out a little water, add a lot of rum, and salute their good fortune.

If I painted pastoral grace in your mind’s eye, it would move you along one of the island’s antediluvian donkey trails, all the way down to the rocky, windswept southern shore, where you can picnic on giant driftwood or snorkel over coral reefs barely concealed by the sea, while wandering Caribbean cows furrow their brows at the sight of your sun-splashed skin. On your way back, conquer Big Corn’s highest point at Mount Pleasant (40 metres above sea level), where you can wax lyrical over the nature of man’s relationship with earth while climbing over the Soul of the World monument. The sweeping panorama encompasses the whole of the island, what feels like half of the sea, and even Little Corn Island off in the distance. Southern Big Corn is home to the island’s two largest abodes – grand chateaux belonging to former lobster barons, built with impossible angles and imposing colonnades, and with grand gardens rolling to the sea. Caretakers usually allow polite visitors to take a peek inside, while they serve lemonade on a silver tray and share their stories of their island paradise.

Pop into the offices of La Voz de Jesucristo’s 95.3FM, the island’s one-woman radio station, for a temporal lobe massage, then roll along toward the north shore, where you’ll find Island Bakery & Sweets, purveyor of Nicaragua’s finest coconut sweet bread (and other island treats). Pack a picnic basket for an afternoon on the sports field. Baseball is Nicaragua’s most popular sport and an institution on the Corn Islands. What seems like the entire population of Big Corn packs into the local stadium on Sundays, where a few dollars will get you a ticket to an entire day’s worth of games, some snacks and maybe even a few swings of the bat between innings.

Here, killing time is king, although more active pursuits also abound – paddle boarding and kayaking are popular, while the island’s diving experiences, especially at night, are a must.

When you think you’ve experienced about all the paradise you can handle, I draw long brushstrokes against your cerebrum, and point you towards Little Corn, paradise’s own vision of escape. There are no proper roads on Little Corn – your passage to the island is granted via ferry, which allows for ample time to soak up the spellbinding views. Backpacker joints and hippie hangouts are scattered across the northern shore between Goat Beach and the Peace & Love Farm, while the sole upmarket option, Yemaya Island Hideaway & Spa, features 16 eco-luxury cabanas offering crisp linen, rich mahogany furniture that would make Ron Swanson blush, elevated ceilings, rainforest showers, plenty of privacy and unbroken sea views. Yemaya’s luxe trappings spoil some of the castaway vibe, although wi-fi is warranted when it comes time to call in sick and extend the sojourn.

The hotel’s Exhale Studio features a secluded palm-shrouded yoga space and beachside exercise platform, while Yemaya Restaurant, with its open, airy vibe and panoramic views of the ocean and coral reefs, boasts a menu marked by local ingredients and Thai flair, thanks to the influence of Bangkok-born executive chef Dim Geefay, known for her work at Mezzanine Thai Restaurant & Martini Bar in Mexico’s Tulum. In fact, Yemaya’s green lobster curry will forever alter your image of Caribbean cuisine.

Here, killing time is king, although more active pursuits also abound – paddle boarding and kayaking are popular, while the island’s diving experiences, especially at night, are a must. There are some 20 dive sites located within close proximity of Little Corn, and all of them, with the exception of Blowing Rock, are single-tank dives. The White Holes, about five kilometres north of the island, features a trio of sandy patches marked by vibrant elkhorn coral that plays host to nurse sharks, eagle rays and turtles. Jake’s Place, near the southern lip of the island, has an array of finger-like coral and, occasionally, dolphins, while Blowing Rock, an islet 25 kilometres from shore, is home to a staggering array of fish, sharks, rays, eels, barracuda and more.

On land, walk the tightrope between the beach bar palms or trek west into the wild, where chatty green parrots are eager to enter into discourse about the landscape, point out their favorite perches and give directions to the Bottle House, the island’s one ‘cultural’ attraction. Operated by a man named Tall Boy (Little Corn’s head jewellery designer and the incumbent mayor), the Bottle House is a great place to check out locally made art and to cull little-known island history from the self-appointed social gatekeeper.

From here slip into Tranquilo Cafe – Little Corn’s only real nightlife option – to swap road stories over frosty Cerveza Cristal. Of course, coconuts are plentiful and liquid happiness is ubiquitous. By the time the stars light up the sky during your night on Little Corn, you’ll have all but forgotten about the tiny painter in your mind, and will know firsthand what paradise looks like.

On Big Corn, the rustic bungalows at Arenas Beach Hotel start at about US$100 a night. Each has air-conditioning and a terrace with hammock. On Little Corn, checking in to Yemaya Island Hideaway & Spa will set you back about US$400 a night, which includes breakfast, yoga classes and use of beach equipment and snorkelling gear.
arenasbeachhotel.com
littlecornhotel.com

American dollars are accepted on both islands, but make sure you arrive with clean, crisp bills – the slightest tear will render them useless. Island ATMs don’t always work, and credit cards are only accepted at the major hotels. Plan accordingly. You can hire a taxi and driver by the day – you’ll need to negotiate but about US$75 is both reasonable and generous. You can also hire motorbikes, bicycles and golf carts from most hotels. For more information on Nicaragua, check out the official tourism website.
visitnicaragua.us 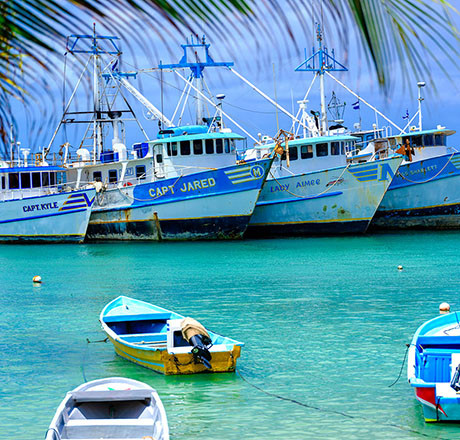 Big Corn is one of the islands that delivers everything you...

Big Corn is one of the islands that delivers everything you would hope for in a Caribbean... 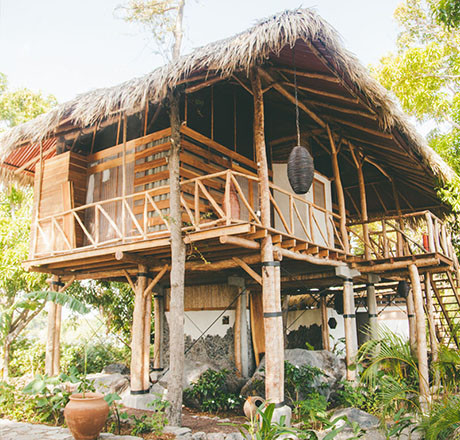 Get the best of both worlds at Isleta El Espino. This off-grid...

Get the best of both worlds at Isleta El Espino. This off-grid island eco-lodge feels far... 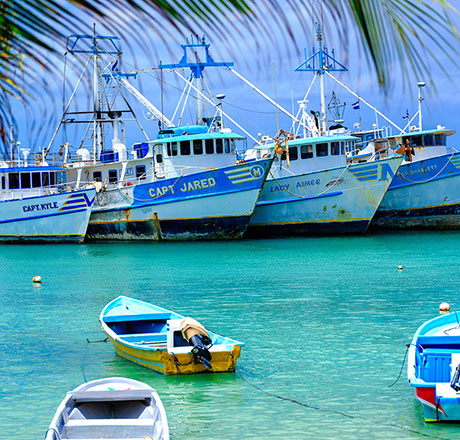 Big Corn is one of the islands that delivers everything you would hope for in...

Big Corn is one of the islands that delivers everything you would hope for in a Caribbean... 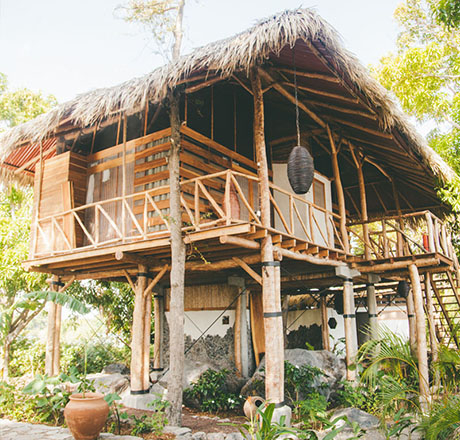 Get the best of both worlds at Isleta El Espino. This off-grid island...

Get the best of both worlds at Isleta El Espino. This off-grid island eco-lodge feels far...