On the Trail of the Divine Madman of Bhutan

On the Trail of the Divine Madman of Bhutan

Instead of adventure, Jen Bird discovered a madman of the most divine kind in Bhutan.

Lama Drukpa Kunley is a spiritual figure in Tibetan and Bhutanese Buddhism – an awakened Buddha who achieved enlightenment but chose to manifest on earth as a mischievous drifter. He aimed to teach the way of Buddhism through thoroughly quirky methods, ridiculing the conservative religious establishment and promoting high living, mischief and a wild sex life as a means of achieving the much-coveted status of enlightenment. To Drukpa Kunley, also known as the Divine Madman, nothing was sacred. He roamed the Himalayas telling jokes, reciting naughty poetry, performing miracles, drinking chung (a Tibetan beer) and seducing women, including, bizarrely enough, his own mother.

On my own journey across Tibet and into Bhutan, I regularly encounter the legend of Drukpa Kunley. I didn’t, however, encounter him in person. He is said to have returned to his birthplace of Tibet in the sixteenth century and either lived until to the ripe old age of 150 or jumped into the Maitreya Buddha’s mouth where he remains today, waiting to be reborn.

Not encountering him in person may not be such a bad thing. Legend suggests encounters with Drukpa Kunley were anything but conventional. One such story has some monks walking towards a village and passing a madman on a hill above them. As they looked up, the madman got himself out, took aim and let loose a urine stream on the shaven head of one monk. The monk complained to the local villagers –“A madman has just peed on my head!” – angrily demanding an explanation. When they took a closer look at the offended head, the villagers were dumbfounded. The words Om Mani Padme Hum (the most widely used Buddhist mantra) were written in gold script across its crown. The monks had encountered no run-of-the-mill madman, but the Divine Madman, the elusive and unconventional Buddhist saint once known to roam the Himalayas. Rather than being insulted, the monk had in fact been blessed!

Drukpa Kunley believed religious institutions were self-serving theocratic havens for those who were too weak to face their own desires and chose to abstain from them. Despite being labelled a lunatic as a result, his popularity remains unchallenged today. This unlikely saint is revered throughout the Himalayas largely because of his ability to relate to the common people. While his playful antics and erratic behaviour continually surprised, he communicated in a way the people understood, leading them along a path to spiritual growth that did not involve harsh abstinence from the delights of life. After all, what would a life without wine be like?

In most illustrations and stories about Drukpa Kunley, he is dressed as a beggar, carries a bow and arrow, and has a dog by his side. While he is venerated in Tibet, it is in Bhutan that I discover his greatest influence. The Bhutanese believe he originally came across the mountains from Tibet, subduing demons along the way with the awesome power of his penis, which he referred to as his Flaming Thunderbolt of Wisdom! (Now that is a new one for you boys.)

Stories suggest Drukpa Kunley could have any woman he desired. He is said to have once followed a stray arrow from his bow into a house. Upon seeing the owner’s wife, Drukpa Kunley sang to her husband: “The arrow has certainly not gone astray, since it has led me to this voluptuous goddess, Tsewong, mine host, please leave us I must lay this lady this instant!”

The husband was initially enraged then realised who Drukpa Kunley was and acquiesced. Because of his penchant for virgins and a philandering reputation, Drukpa Kunley has become a symbol of fertility in Bhutan. Phallic depictions of his Flaming Thunderbolt of Wisdom adorn the walls of many traditional houses in Bhutan. Travellers to Bhutan usually giggle at the paintings. However, the local families who’ve created them do so in the hope their presence will encourage them to sow their own oats, so to speak. Despite the popularity of the Divine Madman’s liberated teachings, the Bhutanese themselves remain very inhibited and shy when it comes to sex. While Drukpa Kunley may be revered for his promiscuity and disdain for convention, few of his faithful would ever act as liberally themselves. 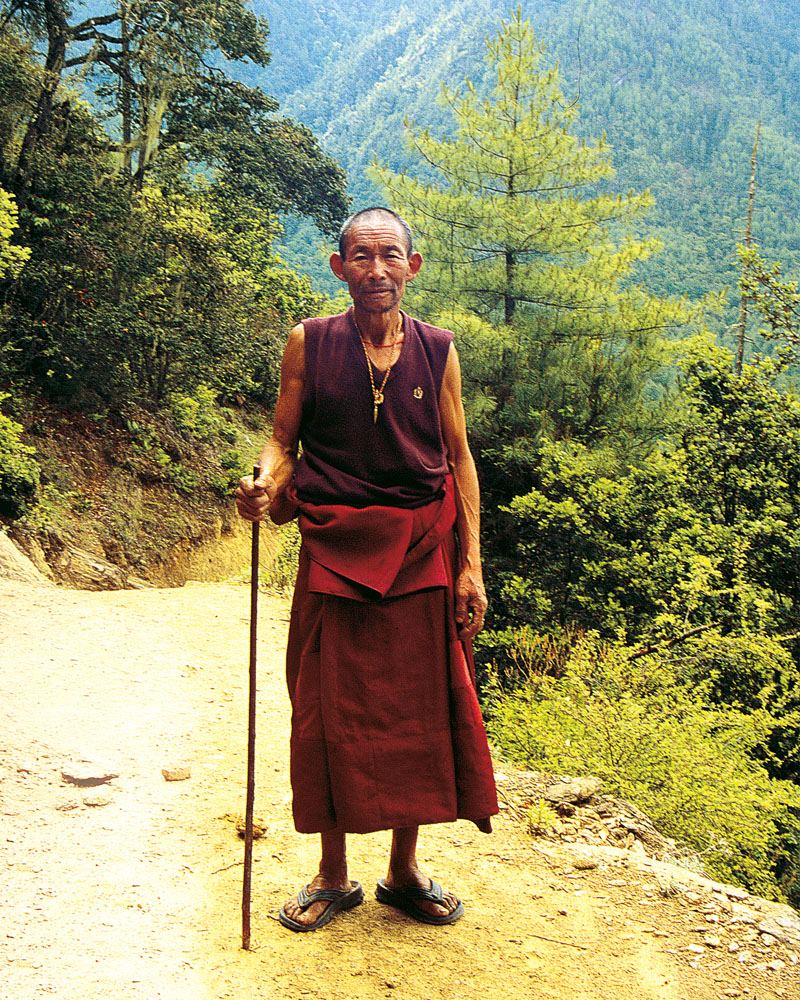 Not all Divine Madman legends are sexual – some are simple messages for daily life. A man in the village of Tobsang tells me one of my favourite tales. Drukpa Kunley was wandering through local fields and came across a woman harvesting wheat. “If you cook me a meal, I will do all your work,” he told her. She happily agreed and went off to kill a rooster. She prepared the entire bird for Drukpa Kunley’s meal, but put aside a leg for her husband. After he finished his meal Drukpa Kunley collected the bones and, with a wave of his hand and a puff of smoke, the rooster was revived. Unfortunately, it only had one leg and in Bhutanese lore, if you see a rooster with one leg it is a bad omen. When Drukpa Kunley left, he pointed to an insignificant rock and told the woman not to look under it for at least three days. But she was too curious and, as soon as he left, she looked and discovered a small pile of wheat, which had been a blessing. Because of her impatience however, the wheat blew away, her field was full once more and she had to do all the harvesting again. Unknowingly, she had failed the Divine Madman’s test.

The Bhutanese do not encounter their Divine Madman much today and, as I said, I am pretty sure I didn’t see him on my travels. However, there are those that believe he is waiting to be reborn and has the ability to shapeshift. Perhaps you can never be completely certain that he is not standing by your side. While no one peed on my head, many a Bhutanese has a mischievous sparkle in their eye and future travellers to their lush Himalayan kingdom may wish to keep watch for the return of the Divine Madman to stir the pot once again. If you are wandering in the mountains and someone pees on you from above, don’t fly into a rage – it may just be your lucky day.

Yudruk Tours & Treks is the oldest travel company in Bhutan, and organises a number of different tours across the country.
yudruk.com 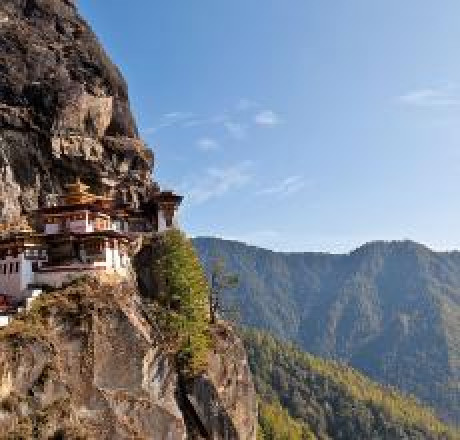 do
Trek to...
Trek to Tiger's Nest
PARO, BHUTAN

It’s one of the most thigh-burning climbs to a temple you...

It’s one of the most thigh-burning climbs to a temple you will ever endure, but... 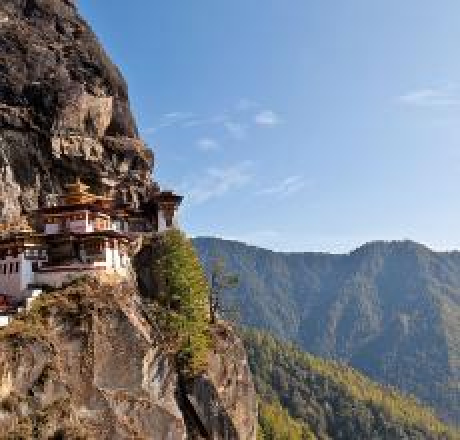 It’s one of the most thigh-burning climbs to a temple you will ever endure,...

It’s one of the most thigh-burning climbs to a temple you will ever endure, but...