Paddling across once-troubled waters in Montenegro, Lisa Perkovic learns a little about espionage and international relations from a small country with a colourful past.

There’s not much hope of remaining inconspicuous when you’re bobbing around in a bright orange kayak on the Bay of Kotor. Montenegro’s UNESCO Heritage-listed bay, directly across the Adriatic from Italy and close to the Croatian border, has featured in a few tugs of war over the centuries, and the remnants of these conflicts are all around – although some are well hidden, unlike me. Fortunately it’s all quiet on the western front these days, otherwise I’d be a sitting duck.

Despite its often-troubled past, Montenegro is slowly emerging from the shadows of the former Yugoslavia as a proud and sovereign state, having gained full independence from Serbia in 2006.

In the same year, the country burst onto the big screen with a starring role in the movie Casino Royale. James Bond sped along the Budva coast in a speedboat, lost a lot of money at the casino (actually filmed in the Czech Republic but that’s Hollywood for you) and then went on his way: Montenegro instantly became synonymous with the high-roller lifestyle. In reality, the place is slowly catching up with its own image.

Herceg Novi is the first major town south of the Croatian border, and it’s from here that the Bay of Kotor opens up to reveal many secrets. Our first lesson in espionage is to look beyond the obvious.

Striking out across the ripple-free bay, we dodge yachts and fishing boats to reach Montenegro’s Lustica Peninsula. The crossing hasn’t always been such smooth sailing. Directly opposite Herceg Novi lies Prevlaka Peninsula, a highly strategic territory situated on the southern tip of the Croatian border, once the source of much dispute. 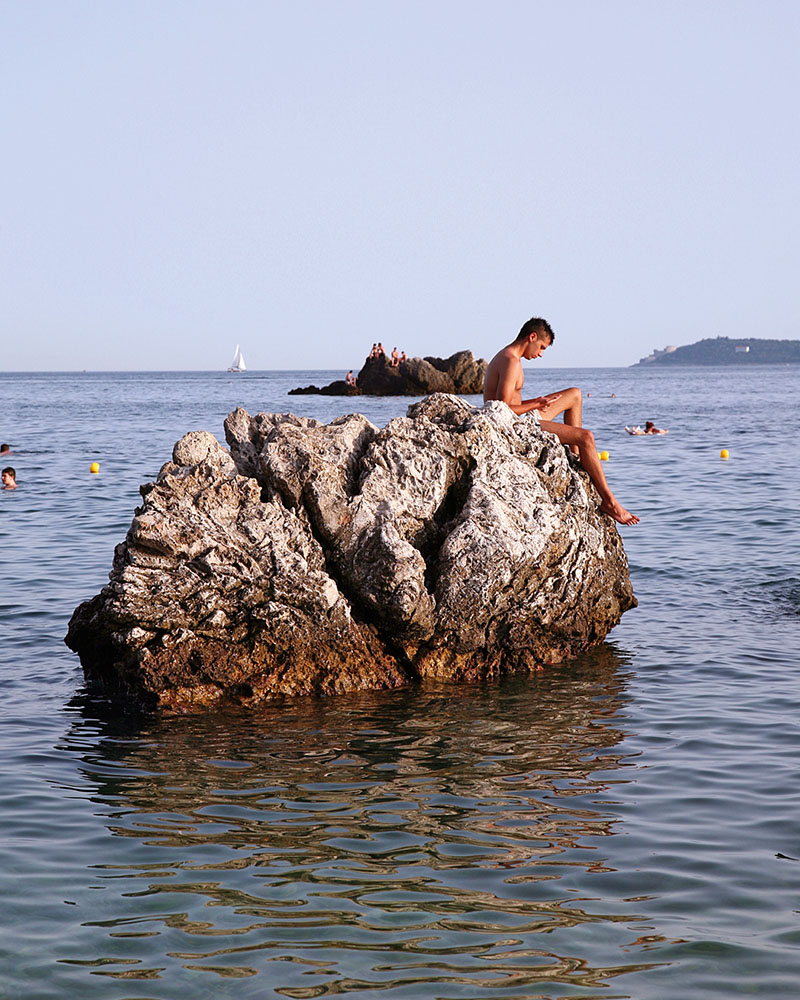 A young beachgoer at Herceg Novi. Click to view gallery

From the water, both sides of the bay look mild and innocuous. Until we spot gaping black holes cut into the cliffs, that is. Tito’s submarine pens are a sobering sight. The formidable President of the Socialist Federal Republic of Yugoslavia had tunnels chiselled out of the coastal rock face as a precaution against attack.

Cut into the coast like giant socket-holes, the holding pens are an eerie reminder of the days when this coast saw more soldiers than sun seekers and holiday-makers. The locals remember that era. Old men talk of summers spent learning battle techniques in the storerooms at the back of their shops – all part of their compulsory military service.

As I paddle into a submarine pen, the temperature drops as dramatically as the darkness descends. Straight away my sense of space disappears. Slicing a paddle through the dark is the only sign there’s water below. What else lies waiting beneath we don’t want to know. The guards and their guns are long gone, so hopefully the underwater war machines are too.

The pen runs about 80 metres into the rock. By day diving companies use it to simulate night dives and by night local teenagers bring in stereos and strobe lights for rave parties.

There’s plenty of space in here for a dance floor, but by torchlight the bare walls at the dead end of the tunnel have a sinister feel to them. We turn around and flee, with bubbles filtering up through the churning water as we speed out. Looking back you can’t see a single thing inside – this is definitely the place to disappear.

Stealth and camouflage are one thing, but the Montenegrins know how to stand their ground too. Our kayaking tour continues over open water to the abandoned Fort Mamula, built in the mid nineteenth-century by Austro-Hungarian general Lazar Mamula. The fort was once the country’s first line of defence, but it has definitely seen better days.

Last used during WWII (as an Italian prison, with a dark reputation), the cylindrical keep has certainly seen some action. Crumbling staircases climb only halfway up the curved walls, and scrambling up to the outer tower is an at-your-own-risk adventure. From the top, the fort splays out over the small island with 360-degree views of the bay, but there’s a minefield of big sinkholes in the floor. That doesn’t stop those boisterous teenagers of course – the fort’s large doors are kept well oiled by partygoers, and ash circles on the roof mark out the summer’s top bonfire sites.

It would be a lonely night on the fort with just the island’s resident big black rabbits for company, their huge yellow eyes observing you suspiciously from  the dark. I pass on the opportunity. We didn’t bring enough supplies anyway, and the water levels in the man-made reservoir look to be dwindling.

Black Mountain, one of the only English-speaking tour operators in Herceg Novi, regularly plugs up the holes and commandeers the fort for survival sessions. They provide water, food and tents before setting groups against each other in night-time navigation games and team-building challenges.

Spies are supposed to be made of strong stuff, and running around dodging sinkholes and giant rabbits sounds like it would toughen us up, but instead we go swimming off the rocks. Spiky sea urchins are danger enough for me, but at least the clear water helps keep those enemies in sight.

After a long day of exploring, the 3.4-nautical-mile paddle back to Herceg Novi is punishing. Ferries and fishing boats leave waves in their wake and our arrival into the bay is not accomplished with any kind of stealth – certainly nothing like the entrance James Bond made. We collapse on the pebbly shore for hard-earned cocktails – shaken not stirred.

There definitely aren’t any cocktails on offer during our next aquatic challenge, when we navigate the foreign policy of border patrols during a whitewater rafting mission down the Tara River. High in the Durmitor Mountains of northern Montenegro, the waterway traverses the country’s border with Bosnia and Herzegovina, raging across a tangled knot of invisible political lines.

The adventure begins before we’ve even seen the river. Seven hours into a bumpy drive from Herceg Novi, our bus jerks to a halt. Two officers climb onboard, each yelling “passport, passport, passport”. We’re scrambling for our documents when a young man in khaki leaps on too.

Grabbed by the arm, I’m scooped off the bus and into a jeep, gaining political immunity by virtue of being a rafter. My bag gets thrown into the back and we’re off, not even stopping in at the border-control booth before veering onto a dusty road winding down the mountain. I later learn that we’d been at the Bosnian border stop at Scepan Polje, and I was effectively smuggled back into Montenegro after looping into Bosnia by a few metres.

Kamp Grab, a cluster of quaint wooden cottages and grassy campsites tucked into an old oak forest, sits in the foothills of the mountains. The river is a hint of sparkling azure between the trees.

The family friendly camp seems to be a popular stop on the rafting route – picnic tables at the cafeteria are full of people in half-zipped wetsuits. We meet Russians who like to jeer at their comrades coming down the river and cheerful Norwegian families on orienteering adventures. 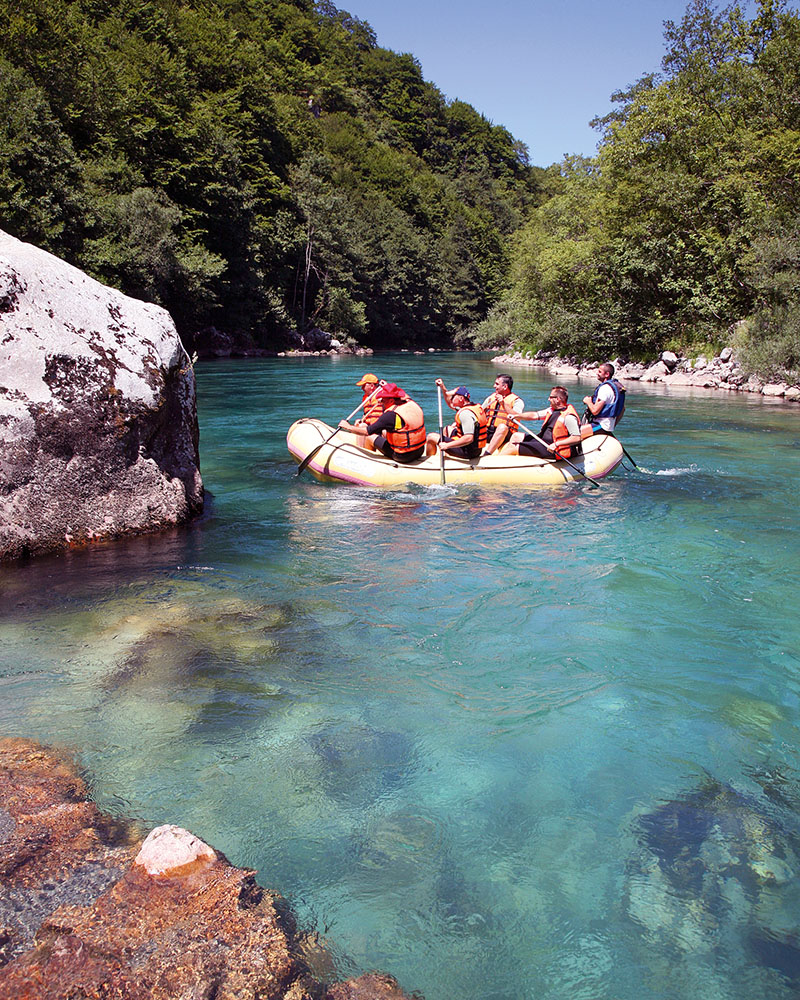 Trying to pull into Kamp Grab on the Tara River. Click to view gallery

In preparation for tackling the river, I first try to conquer the biggest ploughman’s sandwich I’ve ever seen, made by an old woman in the open-air kitchen, who saws off great chunks of bread from wheel-sized loaves. The bread comes straight from the wood-fire oven. Slapped between two pieces are slices of the region’s infamous Njegusi ham, cured high in the mountains at Njegusi. In goes sheep-milk cheese and a few slices of tomato. It’s a hardy meal and has me ready for an afternoon nap, not a roller-coaster run on the whitewater rapids.

But the rafts don’t wait, so I squeeze into my wetsuit and booties, jump back into the jeep and head to the flat, pebbled riverbank at Brstanovica. After a brief orientation from our Polish skipper (“Paddle forward when I say forward; paddle backwards when I say back”) we’re off. There are no straps or handholds, so my toes get wedged deep under the inflatable seat in front and I grip my paddle for dear life as we head through Europe’s longest canyon.

The Tara River Canyon takes up some 82 kilometres of the river’s 144 kilometre length, the rocky walls rising straight up from the banks. We bump and jolt through rapids, and several times get airborne after bouncing off the big boulders. About halfway through I remember to use my paddle.

The river runs fast and clear; you can see each pebble on the bed below when the water stops churning. A water snake cuts across the current, making the crossing to Bosnia without a second thought. In the silence after it slithers out of sight our guide tells us to watch the trees: “There’s men in the mountains over there,” he whispers. We’re floating down a natural border and at some points I could reach out and touch the Bosnian trees – but I don’t dare.

We pool into the shallows just below Kamp Grab, jumping into the icy water to scramble up the rocks. Hypothermia becomes the only danger now, but  with wetsuits rolled down and hands warming by the bonfire, we’ve made our escape.

Herceg Novi is roughly 140 kilometres (a two-and-a-half hour drive) west of Podgorica, The Durmitor Mountains and Kamp Grab are 170 kilometres from Herceg Novi. Black Mountain organises transfers and car rentals from US$40. The drive takes three hours. The bus is cheaper but can take up to seven hours.

There are several three-star hotels in Herceg Novi. Try Hotel Perla for apartment-style rooms from US$40 per person.
perla.me

Black Mountain Montenegro Adventure Travel offers one-, two- or three-day rafting tours and can customise holidays throughout Montenegro to include a range of adventure activities and day tours in Herceg Novi.  montenegroholiday.com