A precarious crossing into Jordan is a worthy entrance to Wadi Rum Electro, a music festival that is a true display of the power of music and its ability to bring people together.

“What do you want in Jordan?” I’m asked as I attempt to cross the border. “Climbing and hiking,” I answer, trying not to blink or look dodgy. The border patrol looks at me with suspicion.

“Maybe a jeep tour, as well,” I hear myself say.

I am starting to sweat. The border from Israel to Jordan closes in 10 minutes and I have made it all the way from Tel Aviv just in time. I have no intention of giving up now. I was told by Shadi Khries, electronic music producer and one of the headliners of the SA7RA-OUI festival, to say as little as possible. No location, no names. The organisers want to stay under the radar.

I’m here to attend the SA7RA-OUI in Wadi Rum, a music festival, I’m told, that’s very different to the others. Hosted by local Bedouins, organised by a French production company and Jordanians from Amman, and attended by Palestinians, Israelis, Jordanians, French and Germans alike, the event embodies the bridging power inherent in music.

As Shadi puts it simply, “The desert gives freedom. We listen to what we want, we dance how we want, and we wear what we want.”

In this dried-up riverbed, all rules are different. Red rocks of sandstone and granite seem to rise randomly into the sky, reaching up to 800 metres high. “We call it The Valley of the Moon,” says Mohammad, one of the hosts from the local Bedouin clan. Dressed all in white with a traditional red keffiyeh – a checkered piece of cloth tied with a black cord around the head – he greets the first guests. Some arrive at nightfall by 4WD, their beaming headlights a beacon in the darkness, moving through the desert valley like a distant torch procession.

Mohammad shakes hands, a cigarette seemingly glued to the corner of his mouth. When he laughs, which he does often, he reveals teeth slightly stained by tobacco and Arabic coffee. “This is our land,” he says, and he is not wrong. Bedouins make up 40 per cent of the Jordanian population and have inhabited these dusty plains for around 500 years. Next to the dance floor, men are lighting a bonfire, and preparing coffee and tea for the newcomers. Hospitality is a crucial part of their identity. “We just continue our tradition – receiving strangers and wanderers of the desert, giving them shelter and food,” Mohammad explains.

For years, Shadi has been friends with the Bedouins from the village. “We agreed we have to break down all barriers,” he says in his quiet yet penetrating voice. “You have to be very careful, respect the place and find common energy with the people living here. It cannot be about girls, mingling and cocktails, but only about the music.”

This time, he’s invited Paris-based duo Acid Arab to be the night’s highlight. Members Guido Minisky and Hervé Carvalho interweave Middle Eastern strings, percussion and Arabic scales into the framework of electronic music, allowing instruments such as the rebab, oud and qanbus to dive deep into the fabric of the club sound. Whenever they hit a familiar Jordanian tune and twist the knob in the right direction, Bedouins begin jumping from the rocks into the middle of the dance floor, taking each other and the foreigners by the hands and moving to the beat in ecstasy.

“What an interesting experience – dancing in such a crowd,” says Simon, one of the attendees, his expression a mixture of excitement and astonishment. As the only Jewish guest from Israel, he rarely finds himself having fun with his Arab neighbours. “But this is the next step, this is transcendence,” he says before I see his afro disappear through the crowd.

Next to him, Spiro and Daniel from Bethlehem are shaking their dreadlocks. Their hearts belong to trance music, but they confess it’s a somewhat elusive love. “A trance or electronic scene is almost non-existent in Palestine,” says one. “You have to look for it.” According to him, Arab countries of the Middle East are still in their infancy when it comes to contemporary electronic music.

On the other hand, this is why festivals are still authentic, dedicated spaces for the true counterculture and the outcasts. Especially for musicians, bookers and producers from the underground scene in the West Bank and Gaza who have a hard time expressing their art and building a crowd. They lack funding, freedom of movement and visas to go abroad, making it hard to pursue an international music career. As a result, many bands have their fan base in places they can never visit; meanwhile their compositions travel across oceans to places like Paris, Brussels or Berlin. In the Middle East, however, music is a matter charged with politics and every line-up is a statement.

“If you want to listen to Acid Arab and dance without an intervention, you are forced to retreat to such remote areas,” explains Shadi. After the festival, he will leave immediately for Paris. Only the desert can seem to keep him a few days in his home country. “There is freedom in the desert. We have to charge this area with new energy.”

With these words in mind, I gather my belongings the next morning and shake the red dust from my hair, shoes and bags. Some guests have moved their mattresses to higher ground to wake up with the sunrise. Slowly, the light creeps up from behind the mountains. In the distance, a girl pulls her yellow suitcase over a sand dune.

Two 4WD rides, one traffic jam and three police checks later, I am once again facing the border. The Israeli official looks at me and I do not blink. He asks me if I have any Arab friends. “No, sir.” And if I have visited any Arabs. “No, of course not.” What did I do in Jordan? “Climbing and hiking,” I say with a smile. “Climbing and hiking.”

Qatar Airways and Royal Jordanian fly to Aqaba via Doha and Amman from major Australian cities. From there, you can catch a taxi, or organise a private guide or tour to get to Wadi Rum National Park.
qatarairways.com
rj.com

If you like a little luxury, be sure to stay at Bait Ali Lodge where you’ll sleep in traditional Bedouin tents and have access to a restaurant, bar and desert swimming pool.
baitali.com

For more authenticity and bonfire jams with the locals, you can stay at the Wadi Rum Sunrise Camp just seven kilometres from the village. There you’ll have the choice of sleeping in tents, beside the fire or on a sand dune under the stars.
wadirumdesert.com

Wadi Rum Electro is a cultural and music festival organised in collaboration with Bedouins to share their music and culture. The location of the event changes each year. A one-month tourist visa is required for visits to Jordan, and can be arranged on arrival.

Camel rides, 4WD tours,  rock climbing trips and hiking tours can be booked individually from the tourist information point at the entrance of the park or at a later point from one of the Bedouin camps inside the park. 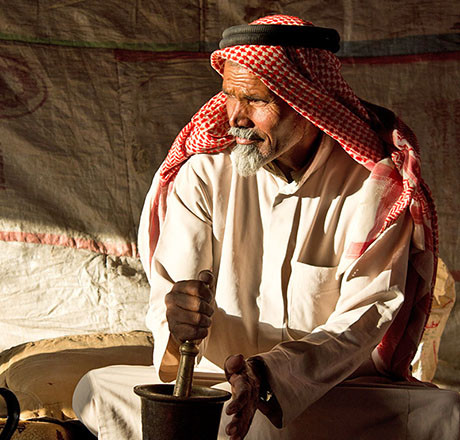 Laze on a roof terrace in the darkness of the desert and gaze... 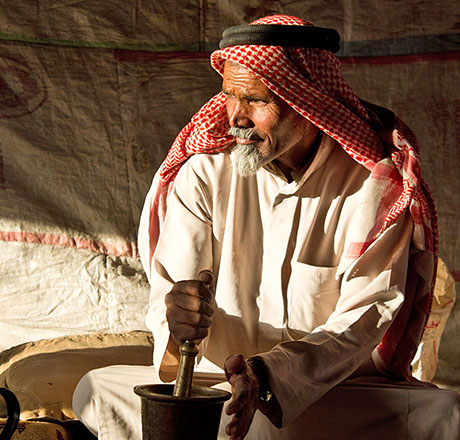 Laze on a roof terrace in the darkness of the desert and gaze at the Milky...