On the small and enigmatic island province of Siquijor in the Philippines, John Oates defies warnings about witchcraft and dives into a mysterious world where scenery, sorcery and sunsets rule supreme.

My young Filipino guide, who a few moments earlier had been full of jokes, lowers his voice as we approach the oldest balete (banyan) tree on the island of Siquijor.

“Local people never point straight at the tree,” he tells me gravely. “And they always ask the spirits for permission before they touch  its bark.”

It’s not hard to see how such a huge and knotted tree, its tangles of roots dangling like a witch’s hair, could become the focus of superstition. Even the way the sunlight filters through those roots is somehow sickly, like a scene from a horror movie, the one just before the doomed teens enter a cabin in the woods.

Fittingly, I’d first heard about this island a couple of months earlier when watching a Filipino film called Siquijor: Mystic Island, a rather tacky affair involving curses, plenty of fake blood and acting that was more wooden than the balete.

Of all the 7000 islands in the Philippines, the small island province of Siquijor in the Central Visayas region has the most persistent reputation as a place where witches roam and spirits hold sway. As I travelled through the country, several people warned me in all seriousness about Siquijor. If I really had to visit, they said, I should make sure that it was only during daylight.

All this had piqued my interest in the mystical island, even if I didn’t really put much stock in the tales of black magic rituals amid the palm trees, or curses invoked by wizened sorcerers. What I did know was that people travelled to the island from around the country in search of traditional remedies, potions and amulets. I heard about a rare technique called bolo bolo in which the healer blows through a straw into a glass of water held close to whichever part of the patient’s body is troubling them. As the liquid grows mysteriously dark, the sickness is supposedly extracted.

Surprisingly, most of the island’s traditional healers consider themselves to be devout Catholics. Brought to the archipelago by the Spanish in the sixteenth century, Catholicism is as deeply rooted in Siquijor as anywhere else in the country. Early in my tour around the island, I had visited what is claimed to be the oldest convent in the Philippines. A long, squat building on the main road that runs through the dusty southern town of Lazi, it was constructed in typical Filipino fashion, with stone used for the ground floor and wood on the first floor. Its huge corrugated iron roof was coated in decades of rust.

In keeping with their mix of Catholic faith and older folk beliefs, the high point of the Siquijor magicians’ calendar is Easter weekend, when spirits are said to walk the earth during the time between Christ’s death and his resurrection. Sorcerers and healers converge on the village of San Antonio on Good Friday, and spend the next couple of days mixing up sumpa (potions) in cauldrons. The ingredients are straight out of a gothic horror tale and include insects and wax collected from church candles. The resulting potions are said to be particularly potent and are treasured by Filipino visitors.

Outside of Holy Week, you need to make an effort to seek out healers if you want to experience their work – despite the island’s reputation, you don’t just see magicians hanging around in the street. Out of interest, I made casual inquiries at my hotel, on the northern Sandugan Beach, and the best they could offer was a traditional massage. The small number of foreign tourists that make it to Siquijor tend, on the whole, to be more interested in the island’s beaches and its scuba diving than any local magic.

Diving had been the first thing on my own agenda when I had arrived on the island a couple of days earlier. I’d only recently received my PADI Open Water certification in Boracay, the most famous holiday island in the Philippines, and I was enthusiastic about getting some more experience. I’d never been anywhere near a wreck, though, so I was slightly apprehensive as we headed out to dive around a Japanese ship that had been sunk by the US army during WWII.

As we descended from the surface the water was much murkier than I had experienced so far in the Philippines. I had just come from nearby Apo Island, where the wall diving was truly world-class and the visibility was phenomenal. Here, thanks mostly to run-off from rivers churning things up, I could see only a short distance ahead of me.

As I followed the outline of the dive master into the gloom, it was clear that sorcery wasn’t necessary for things to get a little spooky, and I could barely make him out as we progressed slowly along the sea bed. And then, seemingly out of nowhere, loomed the skeletal form of the shipwreck. As a beginner, I didn’t enter the wreck, but swimming over the rusted and coral-encrusted ribs of the hull watching out for lionfish – their beautiful fans of spines bearing a potent venom – was a distinctly eerie experience. 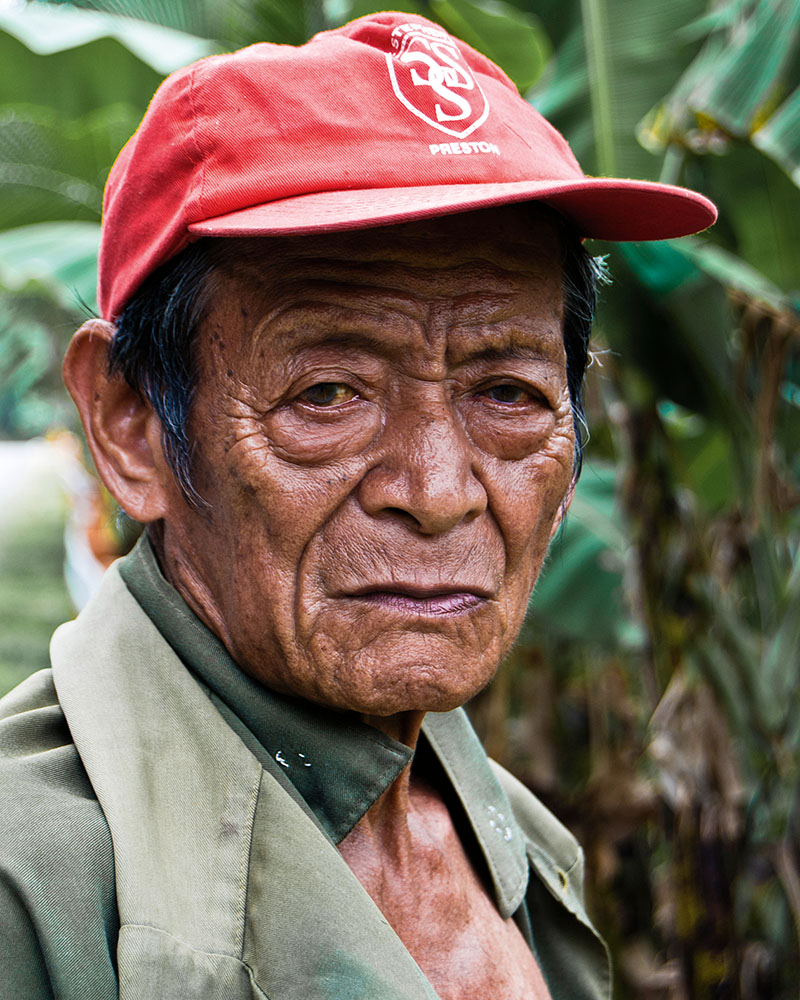 Farmers have all the fun in Siquijor. Image: John Oates Click to view gallery

Back on dry land, Siquijor has plenty of appeal as a beach break destination, with some lovely stretches of sand – some developed and others pleasingly untouched – along the island’s 100 kilometre coastline. Most of the tourist accommodation is either dotted along the west coast, where Paliton Beach is a peaceful highlight, or on Sandugan Beach, where I’m staying. In the southeast, Salagdoong Beach is popular with day-tripping families and local teens flinging themselves into the sea from the rocks.

The road around the island is well surfaced by provincial Philippines standards, so hiring a motorbike to explore is a popular option. Local tricycle drivers also arrange tours, doubling up as guides, and that’s how I decide to get around. Taking the main road down the east coast, we pass vivid green rice fields dotted with scarecrows made from palm branches. Several appear to be wearing orange jumpsuits, giving the slightly odd impression that escaped convicts are watching over the crops.

We stop for a few minutes at a spot overlooking a rickety old wooden house, which my guide says is the oldest building of its kind on the island. The owner lives alone and there are rumours, apparently, that she has supernatural powers. She sits rocking in her chair on a balcony overlooking the sea, while I watch from the road and try to imagine how the place might appear creepy under the right conditions. The pink flowers growing outside the house, together with the bright sunshine, make it difficult.

Deep in thought, I’m startled when an elderly farmer, standing unnoticed right behind me, greets us in the local language of Cebuano. He looks stern and I think we’re being asked to move along, but actually he is welcoming us to the island. It’s only later, when looking at photographs, that I realise he was wearing a baseball cap bearing the logo of a school just a few miles from where I grew up in the UK. It must have been part of a charity package or the rejected product of a Filipino factory; just a coincidence, of course... 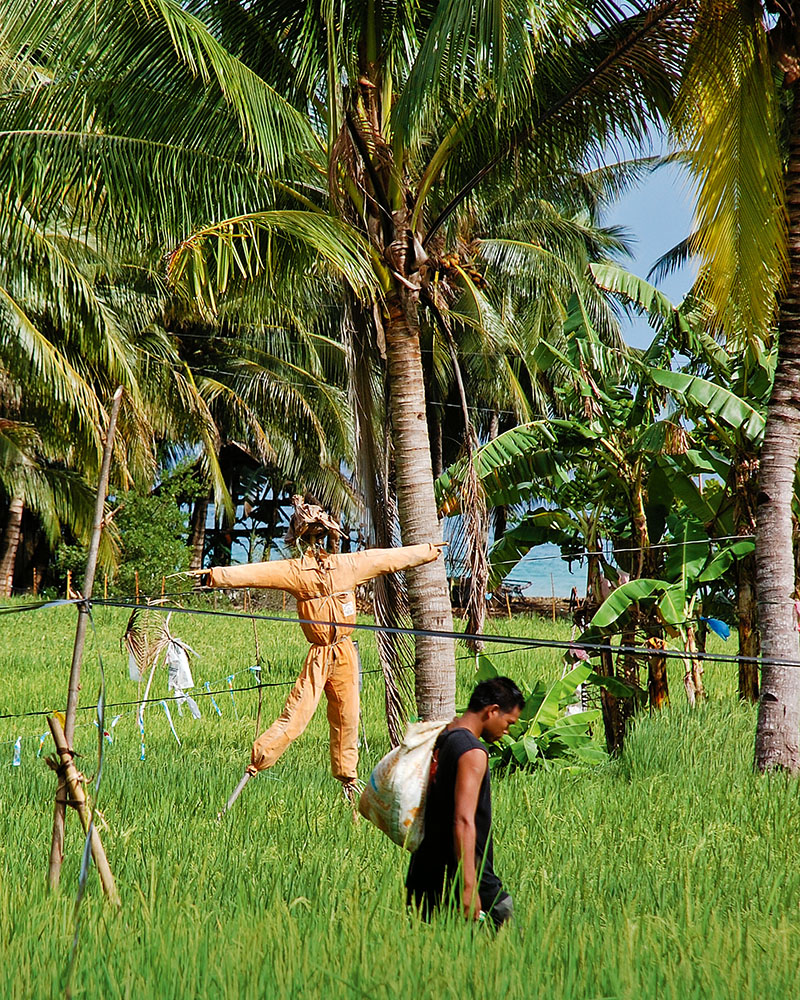 I spend the day visiting beaches, swimming beneath waterfalls and exploring the convent – and an accompanying coral-built church – in the town of Lazi. The last stop is the old balete tree, where, in hushed tones, my guide tells me about some of the creatures linked to such trees. According to Filipino folklore, there’s a panoply of malevolent entities waiting to prey on the unwary. Among the most feared is the aswang, a shape-shifting vampire that preys upon unborn children.

Of course, our guide says, he doesn’t believe in such stories. Not really. He’s a young, modern man. And of course, if we wanted to stand inside the hollow of the balete tree, to get the full benefit of its spooky atmosphere, then we could. But he’s not going to do that himself and, besides, it’s getting dark and shouldn’t we get going?

It’s true – the light is growing dim. All the way round my guide has been hinting that it would be a good idea to be on the west coast by sundown, and now he’s getting positively insistent. As we race towards Paliton Beach it becomes clear why, with the sky starting to take on the most phenomenal, fiery orange and red that I’ve ever seen. The sky, the sand and the sea all morph into glorious technicolour. This Mystic Island, it turns out, is truly bewitching.

Philippine Airlines has direct flights to Manila from Darwin, Sydney and Melbourne.
philippineairlines.com

From Manila, fly to Dumaguete, on Negros Island, then take a 45-minute ferry ride to Siquijor.

Coco Grove Beach Resort, on Siquijor’s west coast, is the most popular on the island. It’s located on a great stretch of beach and has a marine sanctuary just off the shore. Rooms start at US$64.
cocogrovebeachresort.com

The dive shop arranges trips to Apo Island, a three-hour journey by boat. 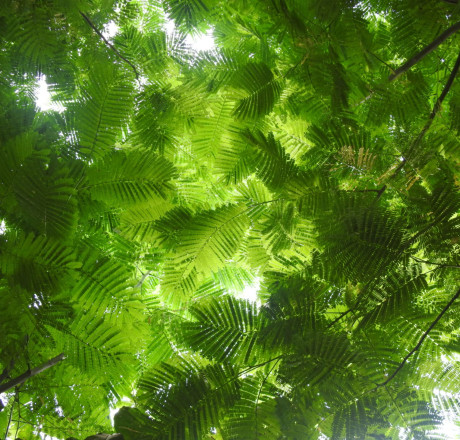 Sure, staying on a beautiful tropical island is good. But... 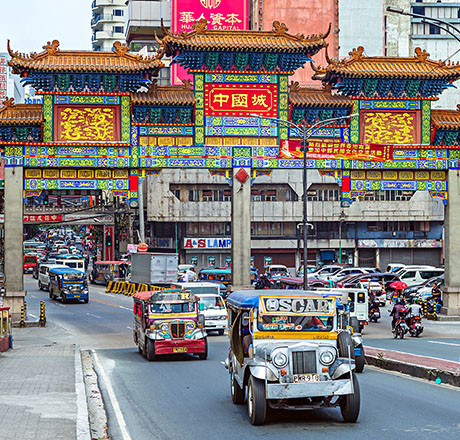 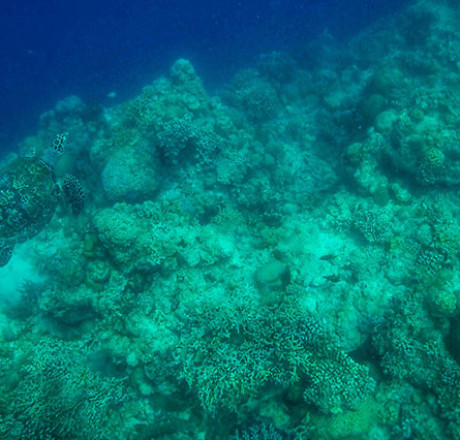 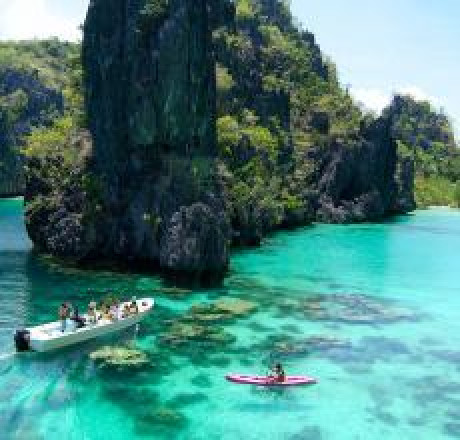 Fancy yourself a bit of a Survivor, yet can’t pry yourself... 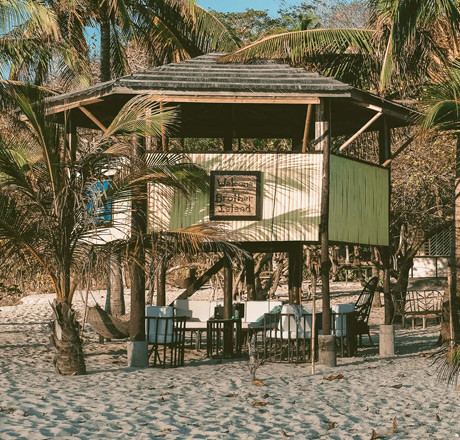 The simple life is waiting. Situated in the Sulu Sea in...

The simple life is waiting. Situated in the Sulu Sea in Palawan, this private tropical... 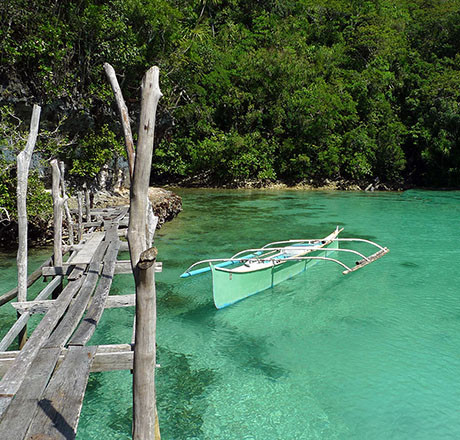 You don’t have to crash into the ocean à la Tom Hanks’s...

You don’t have to crash into the ocean à la Tom Hanks’s Chuck Noland to wash up on a... 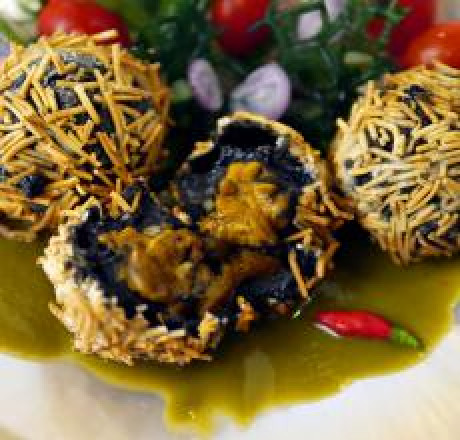 If you’re a fan of Anthony Bourdain you may have already...

If you’re a fan of Anthony Bourdain you may have already heard about Bale Dutung (the... 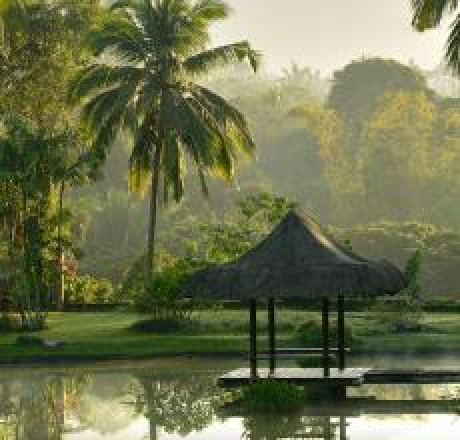 When the frenetic pace of city life has you feeling like a...

When the frenetic pace of city life has you feeling like a battery hen, it’s time to put... 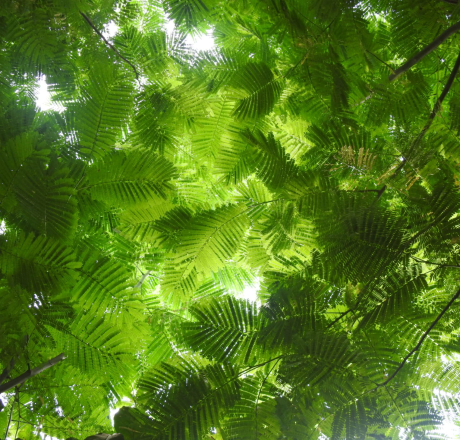 Sure, staying on a beautiful tropical island is good. But having your own... 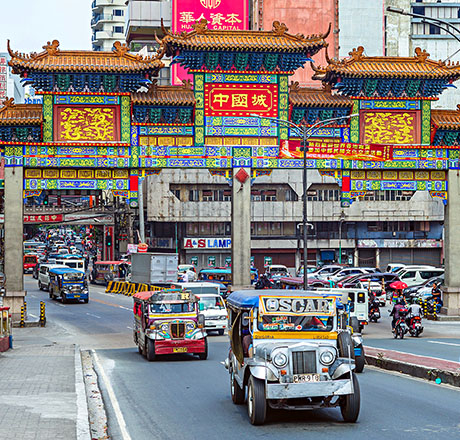 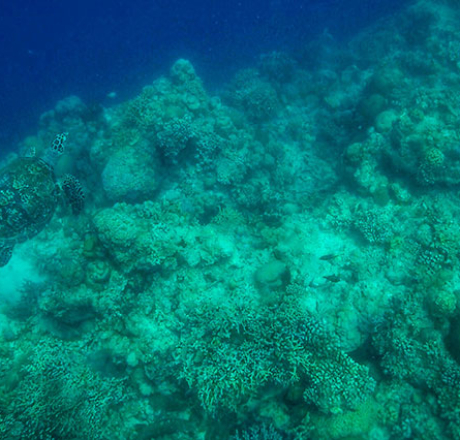 With its Tiffany-coloured waters, immaculate white sand beaches and more than... 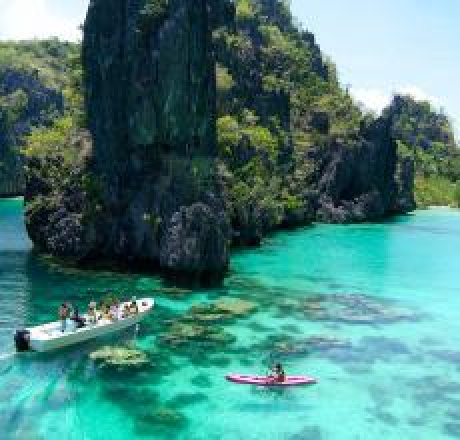 Fancy yourself a bit of a Survivor, yet can’t pry yourself away from...