Unearthing the Rock of Polynesia

Unearthing the Rock of Polynesia

It’s pitch black and I’m being driven into the scrub by a man whose best mate is a machete. Spindly branches whip my arm through the open window and thick undergrowth flicks over the bonnet, like green tentacles sucking us deeper into the bush. A fallen tree blocks our path and Willie kills the engine. He turns to me, the whites of his eyes gleaming in the dark. “Awright bro, let’s find us some uga.”

I scramble out of the car and follow Willie as he disappears under a log and into the night. A beam of torchlight guides me over jagged rocks and gnarled tree roots as insects suckle at my ankles. Best-case scenario: I’ll return bite-speckled with tomorrow night’s dinner. Worst-case scenario: I’ll lose a finger. Or two. I’m hunting coconut crabs, or uga (pronounced oong-ah), a delicacy on the remote Pacific island of Niue. They’re giant land-dwelling beasts and are something of a metaphor for this unique island nation, which is rugged and impenetrable on the outside, and full of rich surprises on the inside.

Niue is a remote slice of Polynesia forgotten by the rest of the world and deliciously unplundered by tourism tsars. The world’s largest raised coral atoll, Niue is home to one of the smallest nations on earth by population, and sits just over the international dateline, about 335 nautical miles from its closest neighbour, Tonga. It’s a destination that has Australian immigration officials baffled when I front up at the airport with N-I-U-E scribbled on my departure card. “Sorry, where are you going?” asks the middle-aged official, who has probably been in the job 30 years. “Nu-way”, I reply. “Where’s that? I’ve never heard of it,” he responds. And that is precisely why I’m going.

A sapphire sea shreds into the rocky coastline, oozing white foam as we come in to land. The rocks surrender to palm trees, then a glinting white runway emerges that’s so bright I’m in danger of searing my eyeballs as I disembark. Niue is affectionately knows as the ‘Rock of Polynesia’, and for good reason. The 269 square kilometre land mass is surrounded by 20 metre cliffs and a coral reef that gives way to ocean so deep you can almost deep-sea fish from shore. The downside is there are no long, white sand beaches to laze on.

“It’s not a flop-and-drop destination,” island orientation guide Keith Vial tells me. “If you flop and drop here you’ll need a first-aid kit.” The upside is there are countless caves, chasms and natural pools to explore, and there’s guaranteed seclusion at almost every turn. Which is just as well, because on my first outing I forget my togs, and a pasty Palagi (foreigner) taking a dip in her underwear isn’t a sight I’m keen to bestow the locals. It’s hard keeping dry in Niue. The lure of the water is intoxicating and, on land, sweat is a constant companion. Often the two go hand-in-hand because this is a destination where effort is rewarded in spades.

At Matapa Chasm, a short path meanders through bird’s nest ferns and clusters of purple oyster plants, before arriving at an opening, where nature’s chainsaw has sliced a vast cleft through the limestone rock. The towering chasm walls plug a basin of iridescent water, fed by the ocean and a freshwater underground stream. This idyllic spot was once reserved for bathing by Niuean royalty. I tread carefully over slippery, candy-coloured rocks and plunge into the cold water. As I wade further in, the thermocline hits, warming the water slightly as crabs skitter on the rock walls. They don’t mind that I’m in my knickers.

At the entrance to Matapa, a longer, more strenuous walk leads to Talava Arches – a formation sculpted by pounding waves and viewed from inside a dramatic cave. The ocean here is wild and you’d have to be in the market for a coral tattoo to swim. I’m not. Instead, I head south to nearby Limu Pools. If the angels in heaven don’t mind getting their wings wet, this is where they would swim. The sheltered pools are gloriously pristine, and taking a dip is like floating around in a giant aquarium zapped by a lightsabre.

The island is riddled with exquisite natural wonders, accessible by marked sea tracks peeling off the main road. I arrive at Togo Chasm early in the day to avoid the searing midday heat and my gracious host Sarah Porter is aghast. “There are two cars here, that’s not on…it’s peak hour at Togo!” she exclaims.

We walk through a coastal forest and into an exposed stone-forest of sharp weathered limestone and ancient coral pinnacles. Next we descend a 27-rung ladder into the cleavage of a chasm populated with soaring palm trees. I wade through a concealed rock pool, climb over giant boulders and find myself in the belly of a massive oceanfront cave. The thundering waves smash into the cliff face with such force I feel the thump reverberate through my body.

Further north I find Avaiki Cave – a wondrous dripstone cavern that opens onto the reef. It’s low tide and I tread across to a sinkhole burrowed into the recess of another cave. The rock formations overhead look like candles melted to a pulp. The water has a blue-loo tinged hue, and fish trapped by the tide flounder about. I join them. I’d stay here all day but Avaiki is tidal and I’m doing my best to avoid that tattoo.

Niue has without doubt the clearest ocean I’ve ever seen. On a good day, visibility is 80 metres. That’s because there are no rivers or streams draining into the sea and rainwater is filtered through layers of porous limestone – the same geological marvel that’s responsible for the caves, chasms and underwater caverns that pockmark the island. 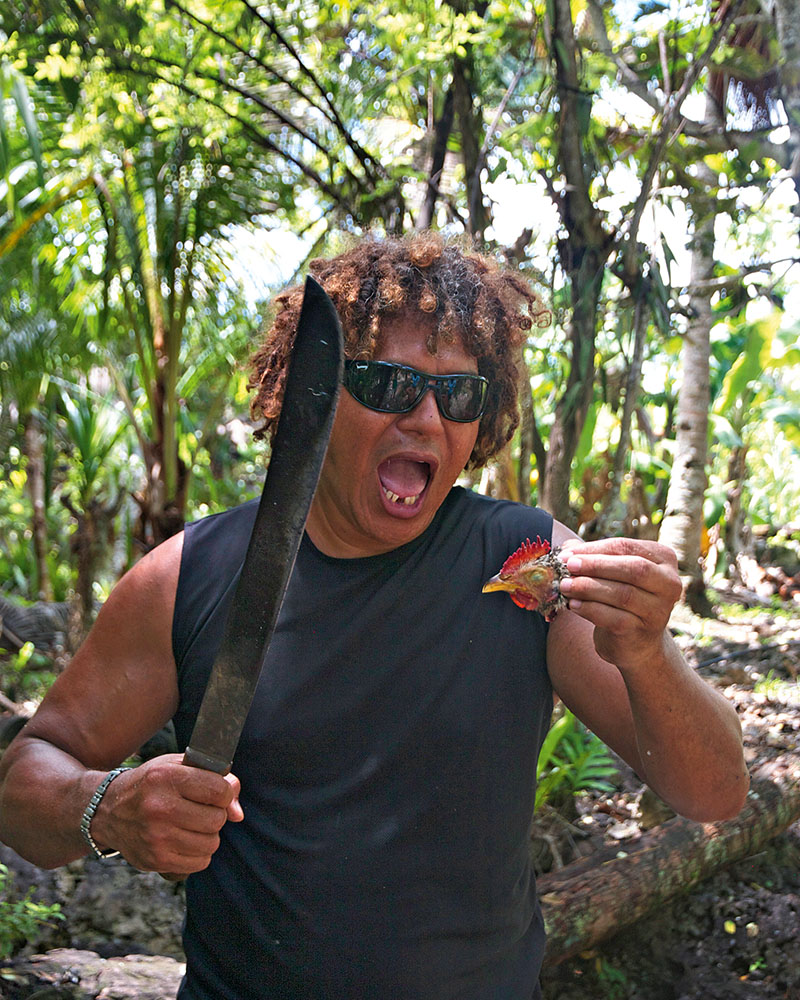 During scuba dives, I fin through dark underwater caves festooned with painted crayfish, and brave Snake Gully – a reef wriggling with highly venomous but harmless sea snakes. I snorkel with playful spinner dolphins that poo in my face and perform graceful pirouettes in the air. It’s surreal. I join a fishing charter – a little disheartened to turn from marine friend to foe – and reel in three yellowfin tuna and a mahi mahi. It’s choppy on the boat but my vomit-to-catch ratio is even, so it’s a good day.

Then there’s the uga. Willie Saniteli is a master hunter of these snappy arthropods, which can live to 50 and weigh up to four kilograms. He teaches me how to lay coconut baits, cutting a wedge out of the husk with two deft swoops of his machete. Willie then slices two lengths of husk that we use as ties, tethering the coconut to a tree root hanging over a rock where the crabs burrow. We return two days later at night to find uga perched on the shells, claws raised like conductors on a podium. Willie grabs them swiftly, putting two fingers in the grooves of the shell behind their heads. I have a turn, conscious their pincers could snap my fingers off like a matchstick at any moment. Willie tells me of a neighbour who lost a finger back in the 70s. Gulp.

Willie is symbolic of modern Niue – he grew up here but was lured away by the lights of the big smoke and spent 28 years in New Zealand. “My dream was to be a mechanic, ride a big motorbike – I did all that so time to come home,” he says. Today Willie is an island entrepreneur with his fingers in much more than just crab shells. He runs fishing charters, organises visitor excursions and owns two cafes, including a self-serve honesty bar on the beach; he’s also just started a free range egg farm.

In a tiny island nation with a dwindling population and burgeoning opportunities for tourism, diversity is key. Ninety per cent of Niueans live outside Niue and the population ‘on island’ has plummeted to about 1300. Most of the workforce is in the public service – which has flourished under the island’s free association with New Zealand. 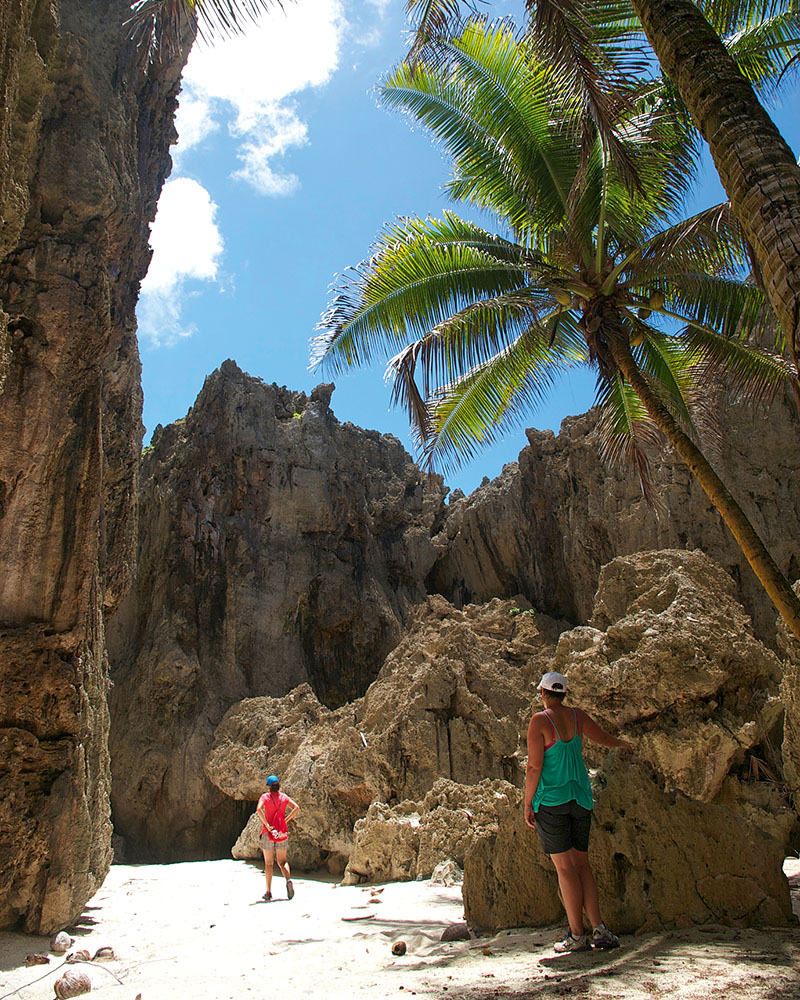 The sandy floor of Togo Chasm provides some relief from the tropical sun. Click to view gallery

Other local characters like Tony Aholima are doing their bit to keep tradition alive. Tony practises plantation farming, among other things, and is virtually self-sufficient. He gives me a tour of his plantations and livestock, pointing out the piglet that he’ll be eating next month and the lucky male that will become chief porker when he reaches sexual maturity. Without warning he lops off a chicken’s head. It’s almost lunchtime. Tony then slices into a coconut for me to drink from, and it’s not until I’ve taken a few thirsty gulps that I realise he used the bloodied machete. Eew.

I leave him to his chicken and join a local women’s weaving group. They show me how they make intricate handbags, baskets and wall hangings from pandanus and coconut tree leaves. They invite me to stay for lunch and I tuck into takihi (taro with pawpaw and coconut milk wrapped in banana leaf), coconut bread, fish, futi moho (boiled green bananas eaten like potato), luku (fern leaf) salad and, of course, uga. It’s delicious and the crab is sweet and rich.

The Niueans are a resourceful lot – they can’t afford to be at the mercy of a monthly container ship, which may or may not arrive, and a weekly passenger flight that doesn’t always have room for cargo. The people are genuinely warm and welcoming. There’s no poverty, the island is clean and there is almost no crime. The jail houses one inmate – an arsonist, apparently, who is serving two-and-a-half years for setting a bloke’s house on fire. The bloke shot him and served six months alongside his victim, and they’re now best mates.

I quickly fall into island life. My routine is dictated by the tides. I ditch my seatbelt (sorry mum) and wave to passing motorists like a local. I dine with the first high commissioner of Niue and his wife, and greet the couple like old friends when I bump into them a few days later. There are so few visitors here and I know most of them by name, if not by face. We’re all on the same flight home and most are staying at the Matavai (the only resort in Niue). I feel like a local.

The rock has shown me its softer side. And I get to leave with my fingers intact.

The Matavai Resort is the only resort in Niue; it has stylish oceanfront rooms and a pool and terrace overlooking the sea.
facebook.com/MatavaiResort

Keith Vial’s Orientation Tour is a great way to orient yourself with the island. Tours are held on Saturdays, the day after new arrivals land on the island.
niuetours.com

Buccaneer Adventures Niue Dive operates diving trips and snorkelling excursions with the dolphins and whales. Snorkelling costs US$62, double dives are US$132, including gear hire.
dive.nu 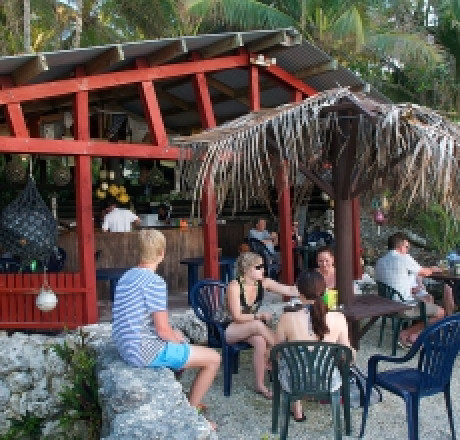 Possibly the last remaining honesty bar on the planet, the...

Possibly the last remaining honesty bar on the planet, the Washaway is a Niue institution.... 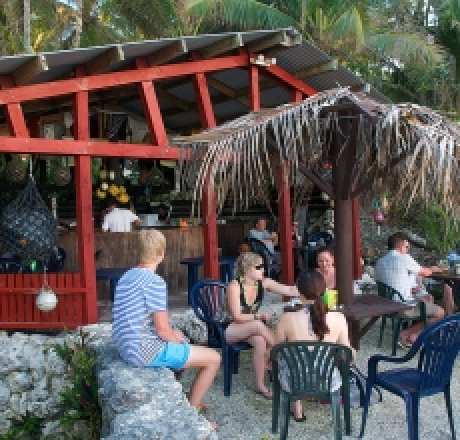 Possibly the last remaining honesty bar on the planet, the Washaway is a Niue...

Possibly the last remaining honesty bar on the planet, the Washaway is a Niue institution....