A New Dawn for Sunrise Country

A New Dawn for Sunrise Country

With an outstretched hand...

Banul Munyarryun, a softly spoken ranger from the Dhalinybuy homeland, beckons me to sit beside him beneath a makeshift tin shelter. His hand movements are the ubiquitous signal in these parts for ‘storytime’.

We’re deep down one of the Mars-like red dirt roads of East Arnhem Land in Australia’s Northern Territory – right on the banks of the fertile Cato River that flows into Arnhem Bay.

Because we’re off the coast, it's oppressively hot. Sweat pours from my brow and my shirt sticks to my back, but beneath the heaving canopy of Stringybark trees a light breeze still envelopes the land, somehow cutting through the thick humidity and tickling my skin.

As he begins his story, Banul’s voice seems to magically quell the environment around us. Almost like he’s an orchestral conductor, syncing up with the tone of the bush and swaying branches. I’m instantly more relaxed in his presence while listening to his story, despite also being fixated on a face weathered, scarred and wrinkled with years of obvious struggle and time.

“When more tourists come here, they will be welcome,” Banul says to me with the sort of wide-eyed reverence and enthusiasm you might come to expect from a hotel marketing manager and not a local Indigenous elder. Just 50-metres to his right sits proud Yolŋu-man, Buwathay ‘Kevin’ Munyarryun. If ranger Banul is the marketing manager around here, Kevin is the regional visionary and owner of Liya Wanhurr Camping and Tours. He’s also the ‘T.O’ or ‘Traditional Owner’ who has agreed to host us in his homeland.

This existing campsite is the spot where Kevin has dreams to build an eco-lodge. With Banul, he talks to me about his plans for a plunge pool, a BP service station for passers-by on the Central Arnhem Highway and a barramundi fishing charter business.

Aspiration doesn’t come easy in a place like this. Located more than 650 kilometres east of Darwin, there's currently just one road into the town of Nhulunbuy from Katherine and on a good day the drive along the Highway can take as long as 14-hours.

But if anything, Kevin and Banul’s willingness to even have us in their Homeland – to watch them perform a bunggul (traditional dance) and walk us around their community – is just the start of a huge social and economic upheaval we’re privileged to witness as visiting media on behalf of local government authorities and the Northern Land Council.

Despite a history dating back 60,000 years (making East Arnhem Land one of the most culturally significant regions in Australia) its tourism infrastructure and population has been shaped by a more modern and at times, controversial mining history dating back to the 1960s.

“These future plans are for my family, this is for our future,” Kevin remarks on his tourism vision for the campsite. He speaks with such promise, but he’s actually referring to what is a very uncertain future in the region without mining giant Rio Tinto, who, despite making record windfalls for decades from their bauxite mine and refinery (bauxite being the raw ingredient used in the production of aluminium), are leaving East Arnhem Land for good.

Rio Tinto stopped refining bauxite at their Gove plant in 2014, and according to Developing East Arnhem Limited (DEAL) there’s still an indiscriminate timeline on exactly when they will fully withdraw. But it will be soon. And Kevin knows the end is fast approaching.

These future plans are for my family, this is for our future.

As I’m sitting watching yet another impossibly beautiful sunset over the old, decaying refinery from the lawn of the Gove Boat Club, it's hard to envisage exactly what the town of Nhulunbuy will look like when Rio eventually pulls both their people and their cash.

There’s not much here anyway except for a handful of motels, a pub, a golf course and the Boat Club where we’re sitting. But as the kids of locals dart around the Club’s perfectly manicured lawn, while yachts bob in the distance and families laugh together over cold beers and hearty pub fare, there’s a familiar aura of tropical Australiana-paradise without the stench of over tourism.

The Jedi of fishing

The potential for East Arnhem Land to become another booming regional tourism centre in northern Australia, just like Cairns in Queensland, is not lost on representatives from DEAL or local tourism operators like Shane ‘Obi’ Kenobi from OBJ Fishing Adventures.

In many ways, Shane embodies the seismic change here and is embracing the socio-economic shift to tourism with gusto.

He’s a local legend, and while his nickname was born from convenience, he really is the Jedi of fishing on the Gove peninsula. Working as a fitter and turner at the refinery for 25-years before ‘retiring’ and starting a local fishing charter business was not because Rio Tinto were leaving, but because of the obvious surging tourism industry and constant stream of 4WDs he’d witnessed pouring into the region. The pandemic didn’t slow it down either; if anything it shone a light on the booming popularity of Australia’s final frontier.

Early one morning, as we cruise out together over a glassy turquoise bay towards one of Shane’s secret spots in the Granite Islands, the hot Arnhem sun rising on our backs, there’s something poetic about the rusting hulk of metal on the horizon behind us where he no longer needs to work to earn a living. We bait our hooks together and watch as a school of tropical fish hug the hull of our boat and pods of snub-nosed dolphins break the perfectly still water with their strangely shaped faces in poetic unison. We catch nothing worth mentioning in this article, but that’s not the point.

You can actually swim here

The same hope for an Arnhem Land buoyed by tourism is held by Territorian husband and wife duo, Helen Martin and Trevor Hosier who recently redeveloped Banubanu Eco-Resort, a tropical beachfront glamping experience on Bremner Island – about a 40 minute boat ride from the mainland. Idyllic, low impact and luxurious in every sense of the word, the retreat with its own protected bay offers the simple pleasures of space, time and an escape from the modern world.

Most locals up here are scared of the water (rightly so given the size of the saltwater crocodiles and near invisible box jellyfish and irukandji), but Helen assures me in all her years standing on the beach of Bremner she’s only ever seen three crocs. The water is so tempting, that’ll do me for assurances: then I dive into the Bahamas-like water for a swim.

AU$180m was committed by the previous Federal Government and AU$50m by the Northern Territory Government to improve sections of the Central Arnhem Road and DEAL (which now has 8 dedicated staff) was established to help guide the economic goals of the region into the future.

More excitingly, just three weeks after my visit, 70 scientists and engineers from NASA descended on Nhulunbuy to put the final touches on a rocket launchpad on the outskirts of the town. The region’s weather and proximity to the equator makes it perfect for small rocket missions carrying satellites.

Couple this exciting investment alongside the Buku Larrŋgay Mulka Centre, which features both the Yirrkala Art Centre (considered to be the number one Yolŋu contemporary art space in northern Australia) and the Mulka Project next door – a digital art production studio - which has exhibited their work at the Sydney Biennale and even hosted Apple’s global marketing team in 2021.

Even Kevin from the Dhalinybuy community sells his work at Yirrkala. His self-titled album can also be found on Spotify, instantly transporting you back to his homeland and the banks of the Cato:

In Yolŋu, the word Buku-Larrnggay translates to “the feeling on your face as the first rays of the sun touch it”, something that you can only experience in this part of the Top End which is also known as Miwatj, meaning ‘Sunrise Country’.

After learning about both Buku-Larrnggay and Miwatj while browsing carvings and screen printings at Yirrkala, it's something I decided I wanted to experience myself while I’m in East Arnhem Land.

Early one morning I hop out of bed and hike along the sand towards the top of East Woody Beach, watching out for crocs who might also be there to catch the same early morning warmth. Scaling damp granite boulders, some as big as small cars, I realise only once I’m at the top that I’m not alone.

But it's not crocodiles for company though, but instead a nice mix of locals and tourists all standing in anticipation with their faces edging towards the morning glow. Within minutes, the sun breaks the horizon and at once the dozen spectators all fall silent.

With our eyes now all closed, the sun hits our faces and a new dawn breaks, hurtling Australia’s final tourism frontier one more day towards a new and exciting future.

get in the know At just under 100,000 square kilometres, Arnhem Land is roughly the size of Iceland.

A number of larger (QANTAS, Jetstar) and smaller (Fly North) airlines fly to Nhulunbuy from major Australian cities Sydney and Melbourne, via Cairns, Darwin and Townsville. The real adventure is to be found driving up the iconic Central Arnhem Road, if you’re game.

Banubanu Eco-Resort on Bremner Island is our pick of the accommodation in East Arnhem Land – a tropical glamping experience facing the Arafura Sea, about 40 minutes from the mainland.

Liya Wanhurr Camping and Tours is your go to for all the info you need in getting up to the far north.

OBJ Fishing Adventures is your go to for catching big bois. 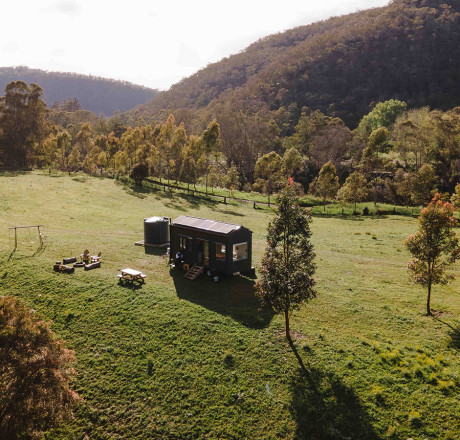 The Tiny...
The Tiny Renaissance
AROUND AUSTRALIA

Into the Wild Escapes are a set of tiny homes that seem to be...

Into the Wild Escapes are a set of tiny homes that seem to be multiplying faster than... 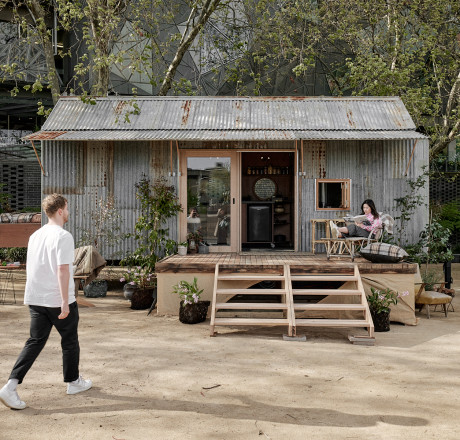 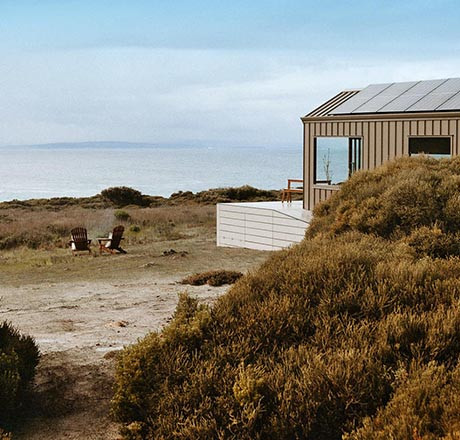 We’ve all had a cabin dream at some point, and we’ve found... 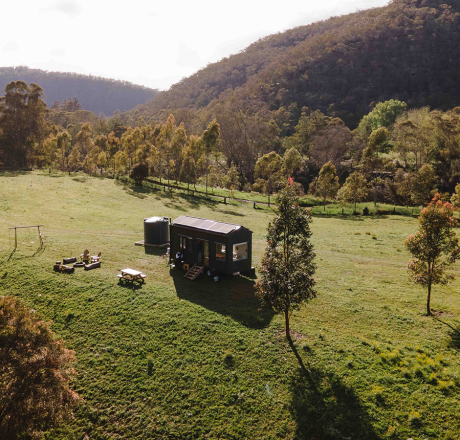 The Tiny...
The Tiny Renaissance
AROUND AUSTRALIA

Into the Wild Escapes are a set of tiny homes that seem to be multiplying...

Into the Wild Escapes are a set of tiny homes that seem to be multiplying faster than... 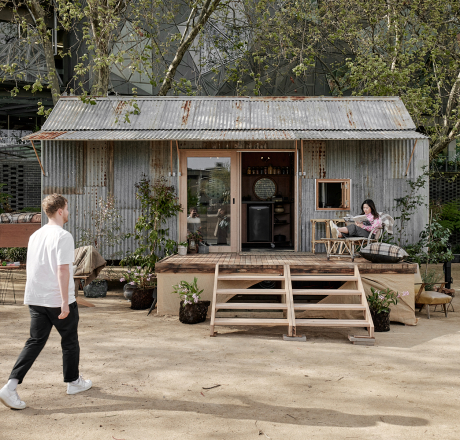 Dad’s shed, but get rid of the tools and put in a bed. And make that bed... 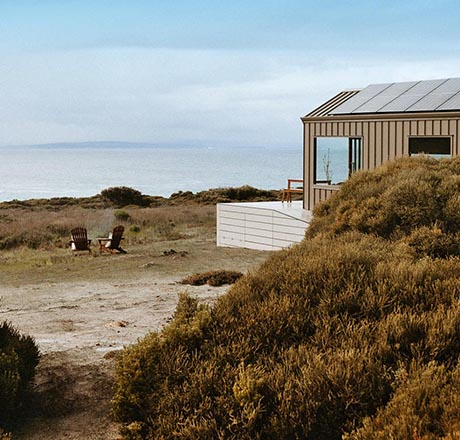 We’ve all had a cabin dream at some point, and we’ve found one in the...