Kirk Owers hops on a cruise boat to explore the Mekong River, the lifeblood of Cambodia and Southern Vietnam, and absorbs a history lesson by osmosis as he drifts along the mighty waterway.

It begins as ice melt and summer rain high in the Himalayas. Trickles form rivulets that merge into an icy blue-grey stream. The river gathers volume and turns a rich brown as it pours into China, where it is dammed, and into Myanmar, where rapids rage. Then it flirts with Laos and Thailand and for 400 kilometres becomes their border. But it is when the mighty Mekong is halfway across Cambodia that something truly remarkable happens. The water, which has grown immense on monsoonal rain, slows then stands still as if unsure about its destination. That’s when something even more unusual occurs. It changes course and flows backwards.

The Mekong performs this counterintuitive feat every wet season for months at a time. The river becomes constricted and its waters are forced upstream, engorging Tonle Sap Lake. By September the lake has grown up to five times in size and the Mekong begins to resemble an anaconda digesting a small horse. Tonle Sap is known as the beating heart of Cambodia and it has been pulsing away like this – one beat every wet season – for time immeasurable. This seasonal back-paddle makes it one of the world’s richest sources of freshwater fish and has led to official biosphere reserve status. All those fish and all that rich alluvial soil make the Mekong the major provider for an estimated 50 million people, many of whom crowd its perimeters or live precariously on its swirling waters.

For a week in early August there are an additional 28 humans who depend on the flooding Mekong for food, transport and entertainment. We are travellers aboard the Mekong Pandaw, a modern four-storey passenger vessel handsomely designed to resemble a colonial steamer. We plan to meander downstream (or is it upstream?) to Saigon (officially called Ho Chi Minh City), stopping to visit temples and markets, observing daily rituals and routines, and forming some of our own – cocktail hour on the sundeck being the most pressing. But like 50 million others, our schedule, if not our wellbeing, will be dictated by the vast chocolate stream beneath us.

We embark from Kompong Cham after a visit to Siem Reap and the nearby Angkor temples. A day inside this vast complex of crumbling ruins, soaring temples and ancient walled cities is barely enough to scratch the surface. They were inspired initially by Hindu gods and later by a devotion to Buddha, and the meaning and complexity of the Angkor temples has been compared to the postmodern literature of James Joyce. It takes time and research to fully appreciate the grandeur and significance of these magnificent buildings.

Angkor Wat is the most famous, best-preserved and, apparently, largest religious structure in the world. From a distance (or a helicopter) the vastness
of the complex and the genius of its design, engineering and construction become apparent. Up close the carved sandstone walls of the central temple tell the story of the great Khmer Empire in arresting detail: gory battle scenes, multi-limbed gods, multi-layered allegories, 37 heavens, 32 hells and much more compete for your attention across 800 metres of exquisite bas-relief.

The risk with visiting the Angkor temples early in your visit to Southeast Asia is that you’re unlikely to top the experience. Either that or, like me, you might become a little obsessive about them. A river cruise down the Mekong is a great way to ween yourself off the works of the Khmer god-kings, though. There are lesser temples to experience and you’re likely to meet companions who understand your enthusiasm for the Churning of the Sea of Milk and your other top five Angkor engravings.

River cruising was an entirely new concept for me, and one I quickly embraced. I liked the pace: slower than a train but faster than a bike. The activity-to-food ratio also impressed: two expeditions and seven or eight serves of gorgeous food per day. I imagine it to be similar to ocean cruising – only without the fear of seasickness or enforced group fun.

We watched the scenery change and monsoonal storms arrive at what felt a lot like a regal pace. Village kids had time to spread the word of our arrival. For days the embankment was crowded with laughing children who would wave, salute, practise karate moves or scream “hello” over and over. I felt like I was in an aging boy band with a loyal following in remote Asia.

One morning we stopped at a small village and rode in an ox cart through the settlement, past the rice fields and out to a temple to receive a blessing and a prayer band from a wizened Buddhist monk. A procession of children followed us there and back, eager to practise their English. By the end of the excursion they had won us over with flowers, drawings of kangaroos and rings made of grass reeds. We had been serenaded (“If you’re happy and you know it”) and when it came time for farewells I was awash with First World guilt. That evening earnest discussions about how travellers can benefit developing communities without causing dependence were in full swing.

Each morning I would drink my coffee, order my eggs, read my itinerary and briefly wonder if I was really doing enough on this trip. But it gradually dawned on me that a process was underway. During each little trip ashore I was collecting small insights and snippets of experience. Each afternoon and early evening I had the luxury, the time and the deckchair to read. Personal experiences were meshing with a broader perspective. Unintentionally, and often while sipping a beer, I was becoming educated.

I learned about the people of Southern Vietnam, the Chams, who sailed up this very same river in 1177 and sacked the city of Angkor. Then we stopped at village just over the Vietnam border and I meet some real life Chams and bought a scarf and bracelet off them. All the while I’m thinking: if Jayavaraman VII (who in my mind was already Jay-V) hadn’t defeated the distant relatives of these lovely Chams here in the epic naval battle of 1181, then I may have been trading with them outside Angkor Wat, in a country called Champa. Jay-V not only defeated the Chams, but most of the monuments visited at Angkor to this day were also built during his reign. To top it off he ended centuries of devotion to Hinduism and kick-started centuries of devotion to Buddhism. Surely the man was one of history’s great over-achievers.

But I fear that I’m losing you. This is the sort of heady historical stuff that means very little on the page, but can become intoxicating when your drifting down the backwards-flowing Mekong in August. In your fist the cocktail of the day, back there in your wake the still-expanding Tonle Sap Lake (Cambodia’s beating heart) and the twinkling river city of Phnom Penh. And up ahead? The Mekong Delta! Saigon! The South China Sea! All you need to do is sit back, read your history book or exchange tales with your shipmates. Another storm is brewing to port. Dinner will be served when the gong sounds. The Mekong River isn’t going anywhere in a hurry.

Cambodia and Vietnam are both very cheap places to eat, sleep and travel. Try the luxurious and beautiful Victoria Angkor Hotel (US$120 a night) in Siem Reap if you want to live it up. If you’re on a budget good hotels can be found for US$30 a night. Hearty local meals can be found for as little as one dollar. Spend $20 and you are either fine dining or being shafted.
victoriaangkorhotel.com

If you want to explore the Mekong in comfort and style and feast on gourmet meals the RV Mekong Pandaw is hard to beat. Prices start at US$1755 a person for seven nights, with all meals and most drinks included.
pandaw.com

If you’re on a budget, local ferries and boats are available for a fraction of that price, but they can be overcrowded and have been known to break down or sink. 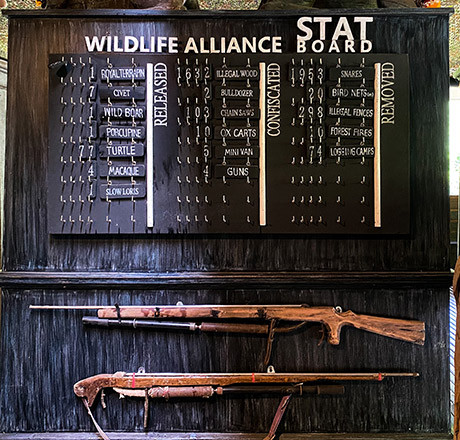 do
Become a...
Become a wildlife ranger for a day in...
KOH KONG PROVINCE,...

Deep in the South Cardamom Mountains in Cambodia you can jump...

Deep in the South Cardamom Mountains in Cambodia you can jump on the back of a motorbike... 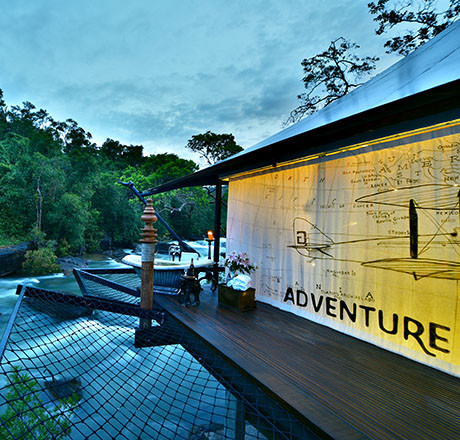 Arriving at Shinta Mani Wild via a 400-metre zip line over the...

Arriving at Shinta Mani Wild via a 400-metre zip line over the rushing Tmor Rung River is... 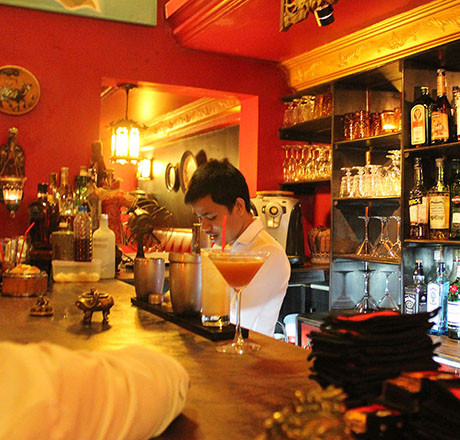 Step into a different era at Miss Wong. Hidden down a lane...

Step into a different era at Miss Wong. Hidden down a lane away from the neon lights and... 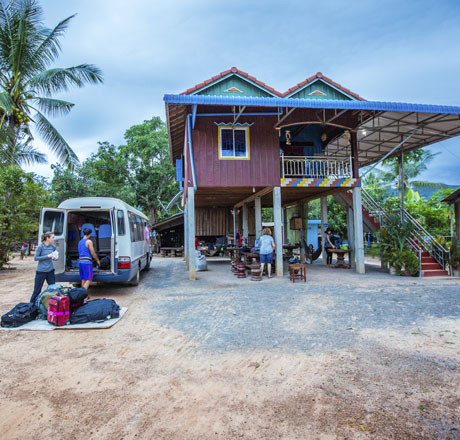 Head into rural Cambodia for an overnight stay with a local...

Head into rural Cambodia for an overnight stay with a local family in Chambok. It's a... 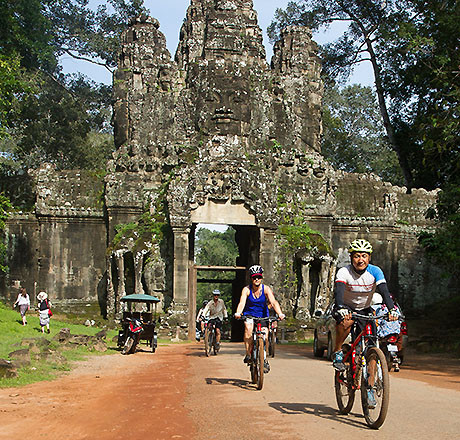 The name Angkor always captures the imagination, conjuring up...

The name Angkor always captures the imagination, conjuring up images of soaring temples... 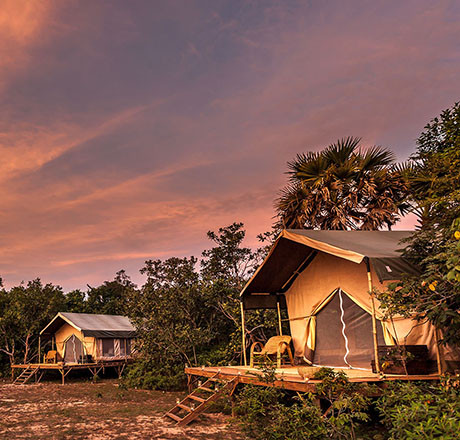 Love the rustic adventures Cambodia has to offer but can’t...

Love the rustic adventures Cambodia has to offer but can’t go without your creature... 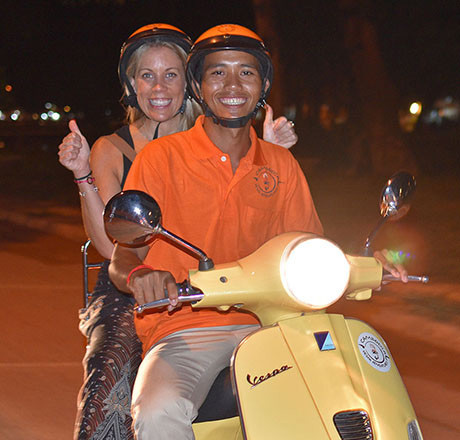 Why navigate the traffic-choked streets of Siem Reap trying to...

Why navigate the traffic-choked streets of Siem Reap trying to find the city’s most... 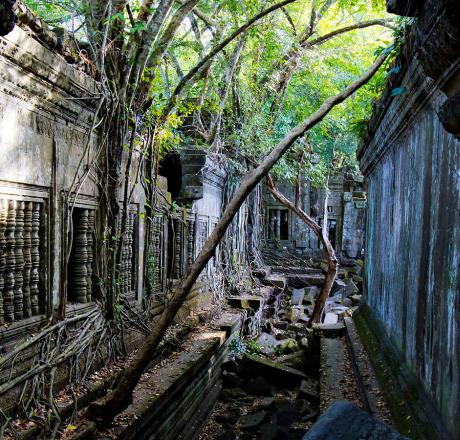 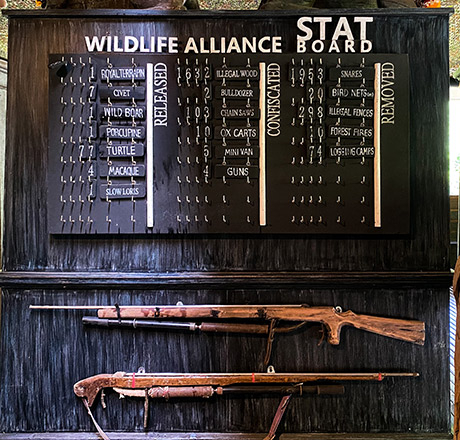 do
Become a...
Become a wildlife ranger for a day in...
KOH KONG PROVINCE, CAMBODIA

Deep in the South Cardamom Mountains in Cambodia you can jump on the back of...

Deep in the South Cardamom Mountains in Cambodia you can jump on the back of a motorbike... 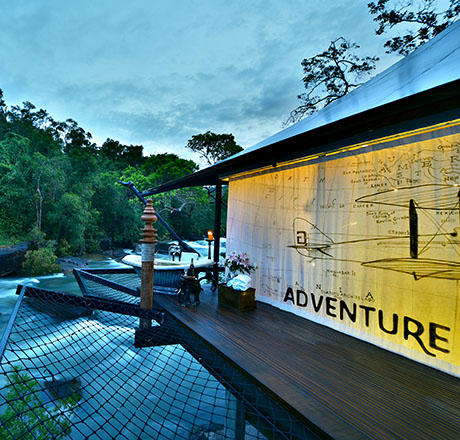 Arriving at Shinta Mani Wild via a 400-metre zip line over the rushing Tmor...

Arriving at Shinta Mani Wild via a 400-metre zip line over the rushing Tmor Rung River is... 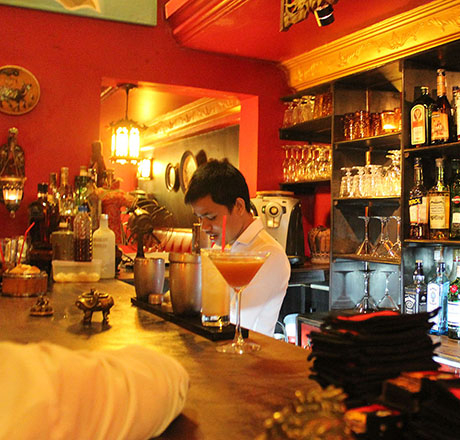 Step into a different era at Miss Wong. Hidden down a lane away from the neon...

Step into a different era at Miss Wong. Hidden down a lane away from the neon lights and... 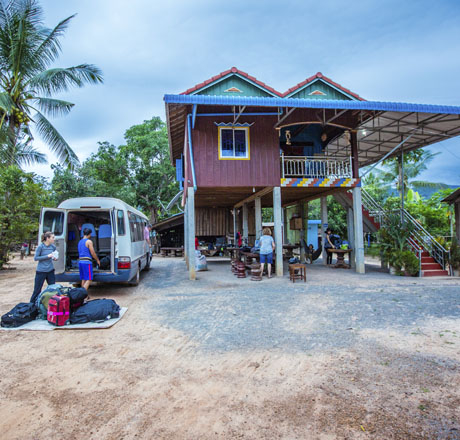 Head into rural Cambodia for an overnight stay with a local family in...

Head into rural Cambodia for an overnight stay with a local family in Chambok. It's a...