Tucked away in Central Europe is a land of glimmering lakes, wild forests and little hamlets. Hop on two wheels to unravel the Slovenian landscape.

Less than 24 hours ago I was lying on a stretcher in a Slovenian emergency room, defeated, deflated and dehydrated – the effects of attending a five-day heavy metal music festival in the scorching summer heat. But now I’m racing down route 209 on a road bike, crossing the turquoise Sava Bohinjka River and pedalling like a madman between lofty limestone mountains with peaks obscured by puffy cloud. I’m picking up serious speed too, making the painted lines on the bitumen blur into one continuous streak.

Thankfully, I’m yet to share this gorgeous mountain road with any cars on this summer’s day, and that’s because I’m cycling to one of Slovenia’s lesser-known attractions. Most visitors limit themselves to exploring Bled, a fairytale lake in the country’s northwest, famous for the baroque church rising from a thicket of green on the island at its centre, and the medieval castle that lords over its north shore.

But I’ve chosen to bypass the tourists and ride from Bled to the less developed Lake Bohinj, Slovenia’s largest and, in my opinion, most majestic alpine lake, just 26 kilometres away.

Assuming I don’t die on the way, I’m also hoping to visit Savica Waterfall, the lake’s main tributary, adding another four kilometres to the adventure. In total, 30 kilometres isn’t a great distance for a semi-fit cyclist. Then there’s me: out of shape, poorly equipped and about as experienced on two wheels as your average 10-year-old. Plus, there’s that whole emergency-room thing. I’m clearly out of my depth, and nearly out of breath – even at this early stage. Although I’m fairly confident I’ll make the distance there without puncturing like a tyre and having my stamina evaporate into thin mountain air, completing the return journey is another matter entirely.

Declaring its independence during Yugoslavia’s last gasps in the early 1990s, Slovenia, as a nation-state, is relatively new on the diplomatic stage. This novelty, however, belies the millennia of history etched into this small tract of Central European territory caught between Italy, Austria, Hungary and Croatia. As with much of Europe, the Romans left their mark here. In fact, Ljubljana, the compact capital, grew from the Roman settlement of Emona, which was founded more than 2000 years ago. The Roman Empire used it as a commercial hub from which to trade olive oil and wine for amber and bronze sourced from outlying provinces.

Even before the arrival of the Romans, earlier Celtic tribes and Neanderthals, Slovenia’s geology and rugged landscape had been refined by Mother Nature for millions of years. The culmination of her work here is the Bohinj Basin and its pearl, Lake Bohinj, which was formed by glaciers during the last ice age. The lake and the surrounding region flaunt rich biodiversity, including dozens of species of alpine flowers and wildlife such as ibex, rare chamois (goat-antelopes native to Europe) and golden eagles. More than two-thirds of Bohinj lies within Slovenia’s only national park, Triglav, which has protected the region from mass development and left its nature relatively untouched. This is where Slovenians come to experience the great outdoors in its purest form, and I’m keen to get in on the action.

Ernest Hemingway once wrote “it is by riding a bicycle that you learn the contours of a country best, since you have to sweat up the hills and coast down them”. Twenty minutes into the ride it’s apparent that Bohinj is making me work for my education, and I struggle to climb fierce mountains (they’re probably just hills) that never seem to end. But for every incline I’m compensated with postcard views of the Julian Alps and dreamy vistas of gushing rivers, rustic hamlets and thick forest – in other words, the slog is totally worth it. Threading my way like a needle through the landscape, I cycle over immense concrete bridges dwarfed by the surrounding mountains that throw their shadows on the road like an eclipse of the sun. I speed past patient locals fly-fishing in the turquoise river below. And I pedal beyond rusted road signs introducing places I cannot pronounce.

I round a bend, the limestone corridor opens into a wide meadow carpeted with blooming purple and golden wildflowers, and the shadow I’ve been riding in brightens by degrees until consumed by the sun. In the distance I spot cows grazing among wooden farmhouses and lonely toplarji, freestanding wooden hay-racks complete with roofs and storage lofts that are used for drying wheat and hay. Unique to Slovenia and particularly prevalent in the Bohinj region, the best toplarji are found in the nearby town of Studor, where they’re well-preserved and still very much in use. Further down the road, a congregation of roofs indicates an upcoming town and I catch a glimpse of sparkling Lake Bohinj on the horizon, oasis-like in its appeal. An arrow of excitement pierces me, and I drop to a lower gear and ride like a parched man in a desert, mouth agape and legs firing on all cylinders.

Ribcev Laz isn’t the largest of the 24 settlements scattered throughout Bohinj. That accolade belongs to the 1700-person town of Bohinjska Bistrica, which has served as the major gateway to the region since a railway connected it to the rest of the country more than a century ago. But pint-sized Ribcev Laz claims the most idyllic location. Sitting on the eastern shore of Lake Bohinj, the town offers splendid views of the valley, including the 1800-metre-high Mount Vogel, Slovenia’s premier ski resort. Surrounded by limestone mountains wearing patchy beards of vegetation and spindly evergreens, Lake Bohinj holds more than 100 million cubic metres of water – which isn’t more than a bucketful, says an old Bohinj joke, if the bucket is large enough. Stretching for more thab four kilometres long and a kilometre wide, it looks more like a small emerald sea than a lake.

At the local tourist office, I’m informed that the lake acquires its green tint from the minerals and sediments found in the glacial waters that feed it. I also learn that 15 marked bike trails skirt the lake, as well as a 12-kilometre path that you can trek for four to five hours. You can also jump on a boat captained by friendly locals and enjoy a 30-minute cruise on the lake’s protected waters. No combustion engines are allowed in the Triglav National Park, I’m told, and so these vessels are all electric and environmentally friendly. For the moment, though, I’m content to just stand and admire the water from the shore. These are the types of vistas that capture the attention and lenses of photographers, locals and travellers alike, and I’m hooked.

Although the lake freezes in winter, in summer the water temperature rises to a pleasant 22°C, making it perfect for swimming, especially after a blistering bike ride. Shrugging off my backpack, I wade into the translucent water and dunk myself under. It’s cold, but refreshing. A kayaking competition is underway nearby, where pre-teens manoeuvre vessels with skill to the cheers of an onlooking crowd. It’s an impressive show, but I’m totally beat, and so I retire to the banks, roll my towel into a pillow and lie down. Eyes closed, I rest my weary limbs as the wind plays with the leaves overhead and pockets of sun emerge from behind clouds to toast me dry.

But there’s still one more mountain to climb. A four-kilometre road winding its way up a peak stands between me and the final to-do on my itinerary: Savica Waterfall. Setting off from the tiny hamlet of Ukanc on the western shore of the lake, I cycle through a tapestry of browns, greens and grey, made up of damp-smelling forest carpeted with decaying leaves and rocks partially hidden under spongy moss. The canopy above has darkened the scene and the twisted tree roots resemble the bony fingers of some unearthed forest monster, ready to rise up and devour me at a moment’s notice. Each hill I crest – there are many – is a triumph of will, and 10 minutes into the belly of the beast I’m running on fumes. There are no other cyclists on the road, and when the occasional car does pass me I’m certain I appear as a picture of desperation in the rear-view mirror. The choice to give up, turn back and drown my sorrows with a cold Laško beer is almost irresistible. But I push on, determined to reach the top of the calf-burner and embark on the last leg of my journey.

After a gruelling 45-minute ascent I finally reach the waterfall’s entrance. I lock my bike, guzzle some water and set off on the short hike to the falls. It takes 20 minutes’ worth of sweat, climbing up 500 slippery steps and over thundering rapids and crystalline streams to reach the viewing platform facing the vertiginous waterfall. From up here the sound of water cascading over the rock face and plunging 78 metres into a frothy turquoise pool is at a roaring intensity. An Italian family asks me to take their photo, and I’m only too happy to oblige. I’ve reached the end of my challenge, collected my reward, and it’s downhill from here.

Back at the restaurant by the entrance, I tuck into a not-so-Slovenian burger, fries and an icy beer. I think about the falls and the power of the water that carved its way through rock over thousands of years, eventually forming a gorge. It reminds me of my own struggle to get here. Like the unending flow, it was sheer will and persistence that fuelled my journey. But even willpower can run dry, and so I return to Bled by bus later in the afternoon. It’s that or risk visiting another Slovenian emergency room.

Fly from Sydney to Zagreb in Croatia via Doha with Qatar Airways. From there Air Serbia offers return flights to Ljubljana.
qatarairways.com
airserbia.com

Buses travel from Ljubljana to Lake Bled daily and take about 75 minutes.
ap-ljubljana.si

Penzion Mlino is a small, family-run hotel right on the lake. Double rooms cost about US$90 a night including breakfast and free bike rental.
mlino.si

Bikes can be hired from Hike&Bike for about US$40 a day. Hike&Bike also runs guided day tours in the region, as well as multi-day cycling trips that include accommodation, bike hire, welcome drink and local guide.
hikeandbike.si

Andy Aungthwin and Aleš Zdešar run exclusive photography tours of Lake Bohinj and the surrounding Julian Alps. Prices start at AU$485
for a one-day photo tour for up to two people.
thelightinbohinj.com 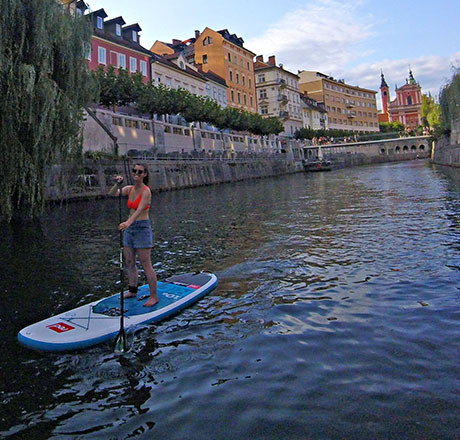 do
Sup in the...
Sup in the city
LJUBLJANA, SOLVENIA

On this stand up paddleboard (SUP) tour through the centre of... 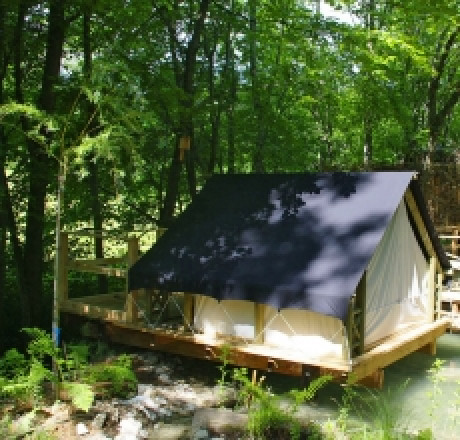 Located in a country already considered something of a hidden... 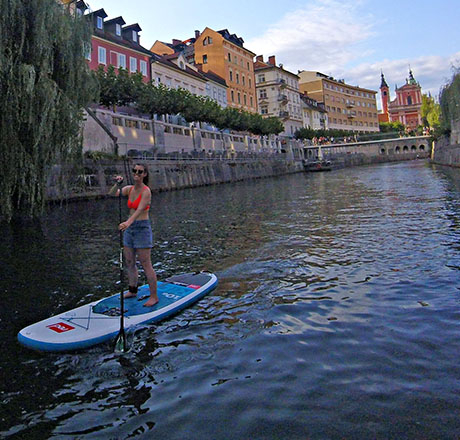 On this stand up paddleboard (SUP) tour through the centre of Slovenia’s... 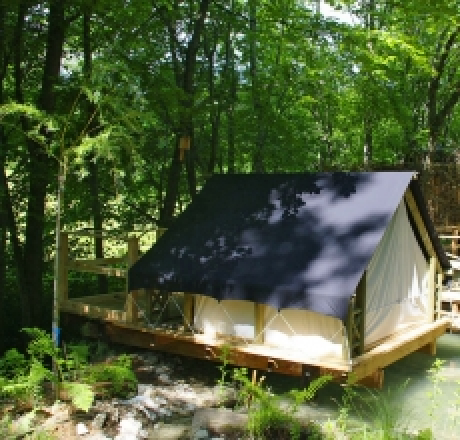 Located in a country already considered something of a hidden gem, Lake Bled...