Caribbean Vibes in the Southern Seas

Caribbean Vibes in the Southern Seas

Bungalows by palm-fringed beaches aren’t to be sneezed at, but the Cook Islands’ real bounty is hidden in plain sight, as Chloe Cann discovers.

We are gliding like a troupe of figurines in Swan Lake: one minute cautiously, quietly pointing a foot, planting it toe to heel, before skating across the stage, spectators gawping in anticipation of a blunder. The next minute we are allegro: springing and bounding and leaping like a tornado. Our backdrop may be pure blockbuster, but this is no extravagant production. We are frolicking in mud, our Kmart plimsolls tacking to the ground, a glistening centrepiece of sweat gracing our foreheads, surrounded by a halo of humidity-induced frizz. It is glorious.

The Cook Islands might be known for its Listerine-blue lagoons, but the interior of rugged Rarotonga is unexpectedly inviting and practically tourist-free. And although the rains may have dampened our trail, punctuating it with portions of sloping quagmire, they’ve not dampened our spirits.

On a cross-island trek we plod from montane forest through cloud forest to the craggy tip of Te Rua Manga (the Needle), in the company of local hiking protégé Bruce, the nephew of Cook Islands’ medicine man Pa. “The air conditioning has come on,” he chuckles, stopping and grinning as the trade winds rush through chestnut trees dressed in moss. Having just climbed a near-vertical staircase of tree roots it’s a welcome relief; a cool lick slicing through soupy climes. In only three kilometres – and numerous lungfuls of air – we rise some 300 metres up this ancient volcanic cone. The slopes are so saturated in lusty greenery they feel primeval – like a T-rex could poke its head through the foliage at any given moment.

That these parts are so sparsely occupied is the legacy of the missionaries, who swept onto Rarotonga’s shores in the 1820s. “Everything changed in an instant,” notes Bruce. “They converted the chiefs then brought all the natives out to live by the coast.” Tattooing and Cook Islands Maori (the local language) were among the other cultural assets targeted by the colonists, although both survived the battle and have been revived by locals with increasing verve. The foreign intrusion has bestowed Raro with one gift, however: this relatively undisturbed primary montane rainforest is now one of the most pristine in all of Polynesia.

As the trail reaches a clearing we can finally survey the lavish layers of green unravelling towards the ocean in 360-degree technicolour, fairy floss clouds engulfing the serrated peaks adjacent. In the distant shadows we spy flat-topped Mount Raemaru, whose name means ‘empty shadow’. Legend has it warriors from Aitutaki, who were envious of Raro’s ample mountains, chopped off its crown while villagers were sleeping and sailed home with it. Curiously, islanders will tell you, Aitutaki’s highest peak today looks a lot like the stolen mountain.

With our ‘cardio’ session now complete, Bruce leads the vertigo-immune among us up the final stretch. Soaring some 413 metres into the heavens, the Needle demands a light dose of rock climbing and abseiling to reach its stony walls. Akin to a (leisurely) Cook Islands take on a via ferrata, we clutch chains and ropes and find our footing in hollows the size of eggs, hoisting ourselves up to the lichen-speckled crest of this rock pinnacle, where a 60-metre drop awaits below our toes.

The downhill ‘yoga’ portion of the trek transpires to be the most deceptively perilous, the coffee-brown soil now a viscous material, ever-encroaching on limbs. We crisscross streams where ferns bow over the water, curling up like musical notes, and wind down trails peppered with hibiscus flowers that glow like flames. We even chance  upon a lesser-spotted pasty, naked Dutch man in a natural pool who was not expecting company. Bruce has been privy to some much more eye-opening encounters on these walks, he says. 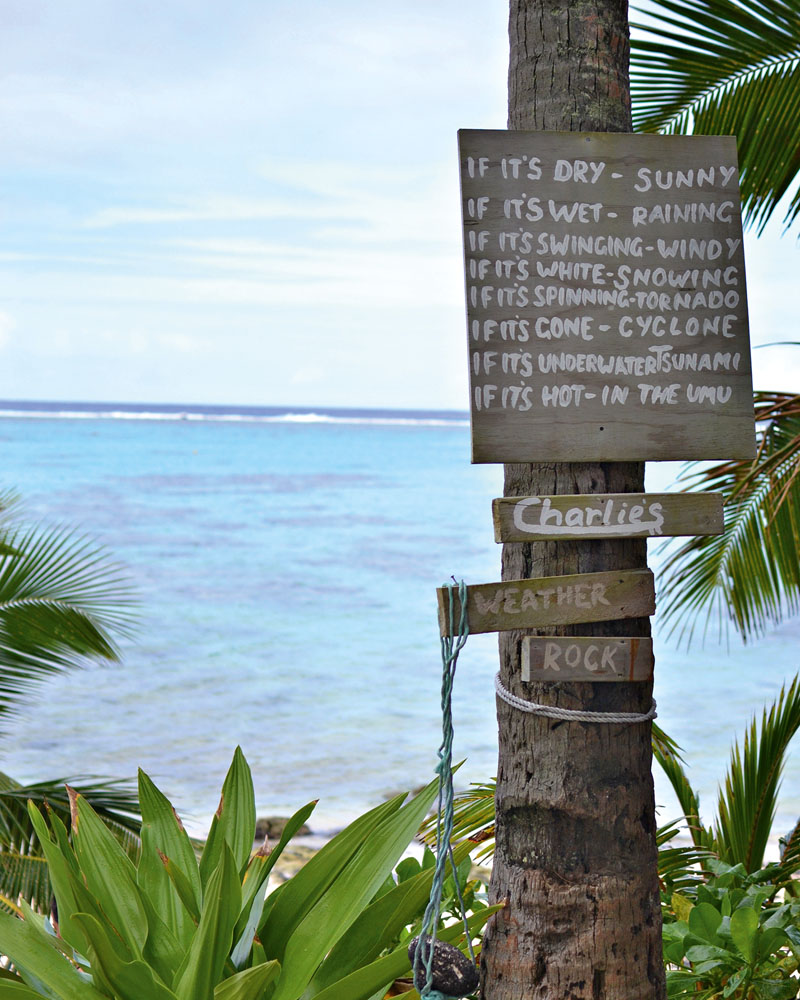 With tourism still in its infancy here compared to several neighbours, some can afford to be bold with their life choices and get away with it. In 2016 the Cooks received some 146,000 travellers, compared to almost 800,000 in Fiji. But things are changing quickly, warns Bruce. “The last 10 to 15 years have gone boom here,” he says. “Right now there’s a good balance – it’s still not too touristy. The people that come here are typically looking for a smaller, less commercialised destination.”

Down by the littoral lowlands that typify the Cooks, people are wearing decidedly more clothes. Local men on scooters sporting basketball singlets and shorts warble as they zoom past us on the island’s single main road, Ara Tapu, listening to tunes through their wireless headphones. Women in flower crowns and vivid floral dresses steer with one hand as they balance stacked polystyrene packets of food in the other, like an offering to the gods.

The road is lined with endless palms and salmon-pink breeze block houses, but peer between the two and you’ll spot surf-shack-style coffee shops that dispense velvety flat whites a Melburnian barista would be proud of. There are also wooden beach bars that serve up fish sandwiches the size of your head, shops fashioned out of shipping containers, and independent breweries doling out growlers full with amber nectar. Add to them the tropical hues that adorn shopfronts and low-rise buildings, and the resulting vibe feels more Caribbean outpost than stereotypical South Pacific resort town. But that’s not to say the island lies stagnant and stuck in the past. One global trend islanders are taking to with zeal is environmental TLC and, as the only remaining industry in the Cooks, tourism needs all the caretakers it can get.

Ikurangi Eco Retreat is one of Raro’s principal pioneers, delving into upmarket glamping territory as well as directing focus away from the beach and back into the hinterland. Open since mid-2015, these luxury safari tents bathe in a sea of shrubbery and trees, and look like something plucked straight off Africa’s plains. There are free bicycles for pedalling around the quiet back roads, where chickens, dogs and stray goats roam around the crumbling remains of ancient marae, sacred ancestral places used for tribal ceremonies. Breakfast materialises on your private deck each morning, replete with Mason jars of granola, toasted coconut and plump berries, or fluffy pawpaw muffins, tropical fruit skewers and fresh juice, all locally sourced. From the plant-based toiletries to the saltwater swimming pool and composting toilet, everything is designed with sustainability in mind.

It’s a similar philosophy on Storytellers Eco-Cycle Tours. We leave almost no trace on our four-hour trip as we traverse taro plantations, where families yank the bulbous root from the ground, and climb old roads built from coral while piglets doze under nearby bushes. The outing revolves around the island’s history and heritage and 10 per cent of all profits are reinvested back into the local community.

But the most monumental step of all in the fight for sustainable tourism is Marae Moana. Covering an area similar in size to the landmass of Mexico, this ocean sanctuary was declared by the Cook Islands’ parliament in July. It’s said to form the largest multi-use marine park in the world, meaning these pristine waters will be safeguarded for generations of locals and visitors to come.

With land comprising less than one per cent of the Cook Islands’ territory, it’s little surprise most travellers come for the country’s surreal seascapes. And there’s no better place to wallow in its waters than at Aitutaki. Often lauded as the world’s most beautiful lagoon, the water is the clearest and boldest I’ve ever set my retinas on. So vivid are its greens and blues, it looks almost radioactive. So pure are its depths  the entire contents of the ocean floor unfold before you in plain sight. You don’t need to don scuba gear, or even a snorkel, to admire the local marine life here – you can spot it with ease from the bow of any boat. Watch schools of giant trevally cruise through the water like underwater buses and small fish in shades of graphite dart to and fro, ogle blinding-white sandbars that suddenly materialise out of tranquil waters, and gaze at palm-drenched, uninhabited motu (islands) that dot the horizon in almost every direction.

Although it takes almost an hour’s flight to reach, a surprisingly vast chunk of Aitutaki’s visitors are day-trippers. But a flying visit means missing out on all the little features that make this tropical isle a big charmer: the street signs scrawled by hand in red paint, the main township with its one ‘superstore’ and two fish and chip joints, beachcombing its deserted shores, devouring dense slabs of coconut cake at Tauono’s ramshackle garden cafe. It may be around a third of the size of Rarotonga, but Aitutaki is so sparsely speckled with houses that it somehow feels bigger and driving barefoot around its lengths with the windows down is surely one of life’s greatest pleasures.

Aitutaki’s staunchly loyal locals – and resident expats – love to bend your ear on what makes their island home the best. “It’s packed in Raro now,” a mustachioed gent tells me over NZ$4.60 whisky served in plastic cups at the Aitutaki Game Fishing Club, a greige concrete structure hidden among the shipping containers by the island’s docks. “Everyone’s always on the go and has no time to chat,” says another playing pool under the strip lighting. “Whenever we can we try and get the first flight out of there. It’s a zoo.” To call the Jamaica of the South Pacific a zoo makes me think he must have also had a run-in with that same pasty Dutch man. 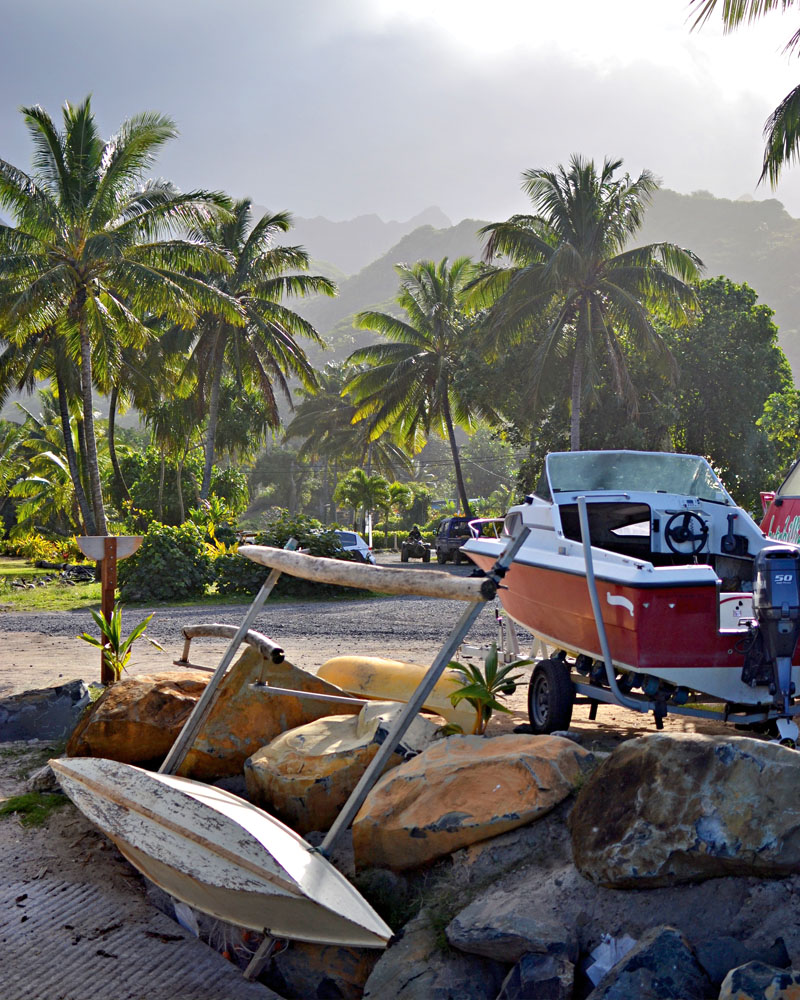 Trace the entire coastline of Rarotonga in just an hour by car. Click to view gallery

Air New Zealand flies direct to Rarotonga from Sydney each Friday on its Dreamliner and returns on Thursdays. Flights start at AU$299 one-way. Air Rarotonga offers daily flights to Aitutaki from Rarotonga, with tickets from around AU$170 one-way.
airnewzealand.com
airraro.com 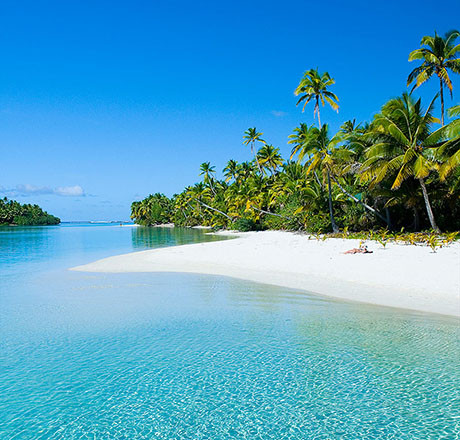 do
Plant your...
Plant your feet on Tapuaeta’i Motu
AITUTAKI, COOK ISLANDS

Not too many years ago, Aitutaki was a well-kept secret....

Not too many years ago, Aitutaki was a well-kept secret. Tapuaeta’i Motu (One Foot... 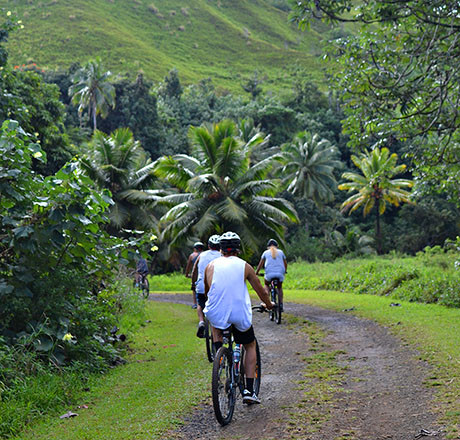 At the heart of the Cook Islands in the South Pacific lies an...

At the heart of the Cook Islands in the South Pacific lies an unspoilt paradise;... 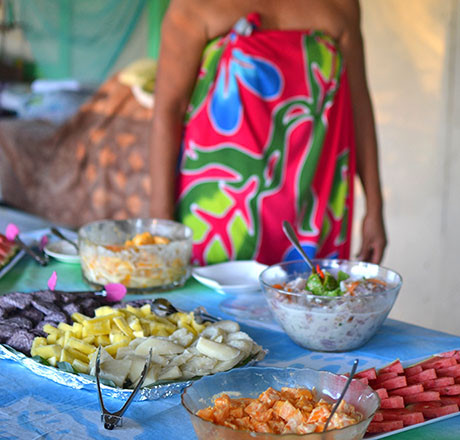 If you've ever lamented not being able to indulge in the odd...

If you've ever lamented not being able to indulge in the odd dinner party while abroad... 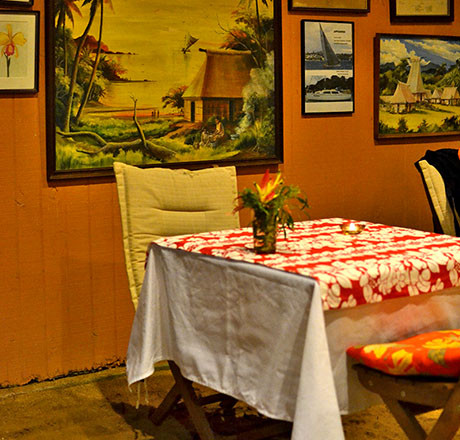 If eating dinner in the extension of a stranger's living room...

If eating dinner in the extension of a stranger's living room sounds unappealing then... 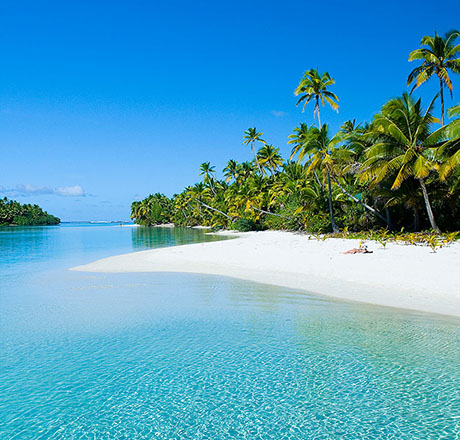 Not too many years ago, Aitutaki was a well-kept secret. Tapuaeta’i Motu...

Not too many years ago, Aitutaki was a well-kept secret. Tapuaeta’i Motu (One Foot... 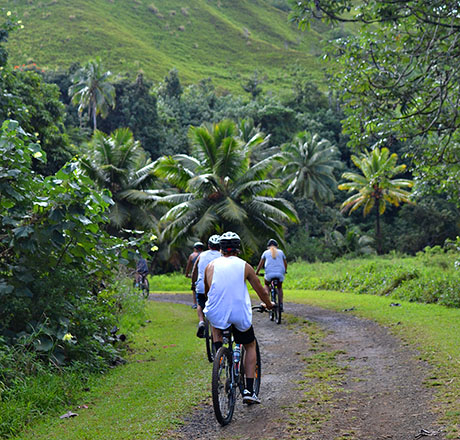 At the heart of the Cook Islands in the South Pacific lies an unspoilt...

At the heart of the Cook Islands in the South Pacific lies an unspoilt paradise;... 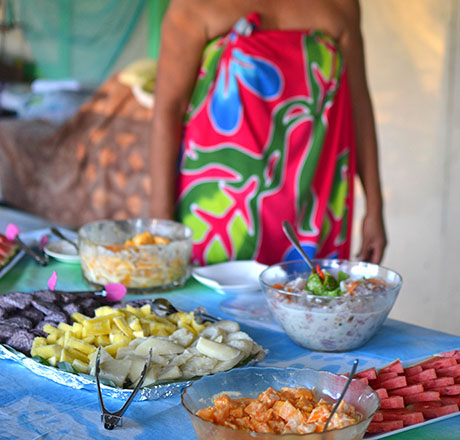 If you've ever lamented not being able to indulge in the odd dinner party...

If you've ever lamented not being able to indulge in the odd dinner party while abroad... 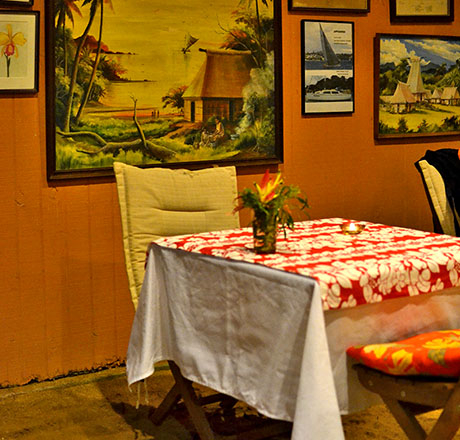 If eating dinner in the extension of a stranger's living room sounds...

If eating dinner in the extension of a stranger's living room sounds unappealing then...