Catch ’Em All in Taiwan

Catch ’Em All in Taiwan

When it comes to food on this Asian island, the tastiest cuisine calls for a hands-on approach.

Hundreds of them scuttle around the murky pool. Each hour their numbers swell as more get poured into the drink. Taipei locals sit in plastic chairs around the edge, sipping beer and checking their lines. It’s 10pm on a Monday night and the place is packed.

A squeal breaks through the chatter. Flailing on the end of a young woman’s rod is a prawn the length of her hand. After sliding the metal out of its mouth, she tucks the critter into a net dangling in the water to keep it fresh until she’s caught enough for a feed. Next, she sets to work chopping red intestines with scissors and skewering a scrap onto the hook.

We’re in one of a half-dozen shrimping halls – fishing pools resembling swimming centres – in the Shilin District, located in the north of Taiwan’s capital. Taipei is known for its excellent seafood restaurants and venues sell fresh fish by the boatload, but from 10am to 6am locals pay by the hour to relax and catch a snack while groups of friends swing by before karaoke.

A typical night at this fishing joint sees 60 kilograms hooked and consumed. Staff members keep an eye on the quantity, adding more prawns to the pool each hour, and visitors can borrow rods and buy shrimp and chicken liver for bait. Barbecues line a wall, serviced by gallons of oil and oceans of salt. Punters skewer their catch and slap it on the grill where the shells turn from translucent green to the colour of sunset when they’re ready to eat. If you’ve caught the goods, that is. “There’s some trick, you need some skill,” says Francis Hu, my guide, as we watch a man topped with anime hair checking an empty line. A talented fisher might snare 10 in an hour, but most people hang around for longer.

Picnic tables cluster in the centre of the hall, where you can crack open your prey and munch to your heart’s content. If salt and oil don’t cut it, cooks will whisk your prawns away to the kitchen and return with something more creative. Noodles and vegetables are also available to order from a menu. A friendly man offers me a creature from his cauldron. Mounds of shells and tissues used to wipe fingers sticky with a glaze of soy, sesame oil, rice wine and prawn juice bury the tabletop.

This kind of casual cuisine reigns in Taiwan and street food stalls congregate at night markets across the country. At the huge Shilin Night Market in Taipei, country fair-style games give way to carts selling beef buns, infamous stinky tofu and squids propped up like puppets. At a market in Taitung, a small city on the southeast coast, oysters the size of fists glisten on display and I buy a skewer from a stall selling candied strawberries varnished in scarlet toffee. While handing over New Taiwan dollars my eyes catch on a sign saying ‘Sexy&Juicy’, with a picture of a pig in underwear exposing its plump derriere. Biting a fruit off the skewer, the sugar coating cracks, torpedoing seeds down my throat. Turns out candied cherry tomatoes don’t taste too bad, even if they’re unexpected.

Blurring the line between savoury and sweet once again is the ice-cream spring roll that finds its way into my hands on a muggy day. Scraping a wooden tool across a slab of peanut praline, the stall owner shaves slithers so fine it resembles fairy floss. She sprinkles the shards onto a pancake and scoops a lilac orb of taro ice-cream next to a white sweet apple one. Coriander leaves go on top and it’s all wrapped up like a giant burrito. Teeth battle time in the quest to consume the roll before the ice-cream melts.

Before the Han Chinese flooded over in the seventeenth century, Taipei was a big basin dotted with indigenous villages. Now the metropolis feels a lot like Tokyo or Seoul – albeit with only 2.7 million people within its limits. Travel down the coast or into the mountains, however, and you’ll find tribal villages eking out a twenty-first century lifestyle melded with traditional ways. Francis takes me to the Fataan Wetlands in the Hualien Province to try my hand at palakaw fishing with members of the Amis tribe.

Unlike the familiar hook-and-line method, the Amis style sees us knee-deep in a river, checking bamboo tubes placed on the bottom. The villagers layer grass, sticks and bamboo in sections of the waterway, with each level designed to attract a different type of beast. “The marine life has no clothes so it likes to hide in the shade,” explains Lalan Unak, founder of the Fataan Pangcah Cultural Workshop, as we plug one end of the bamboo with a hand and pour water out of the other side hoping to find a nude eel or catfish hiding within. Shrimp and crabs dwell in the branches of the second level to avoid being eaten by the next: “The fish with clothes, with scales.” 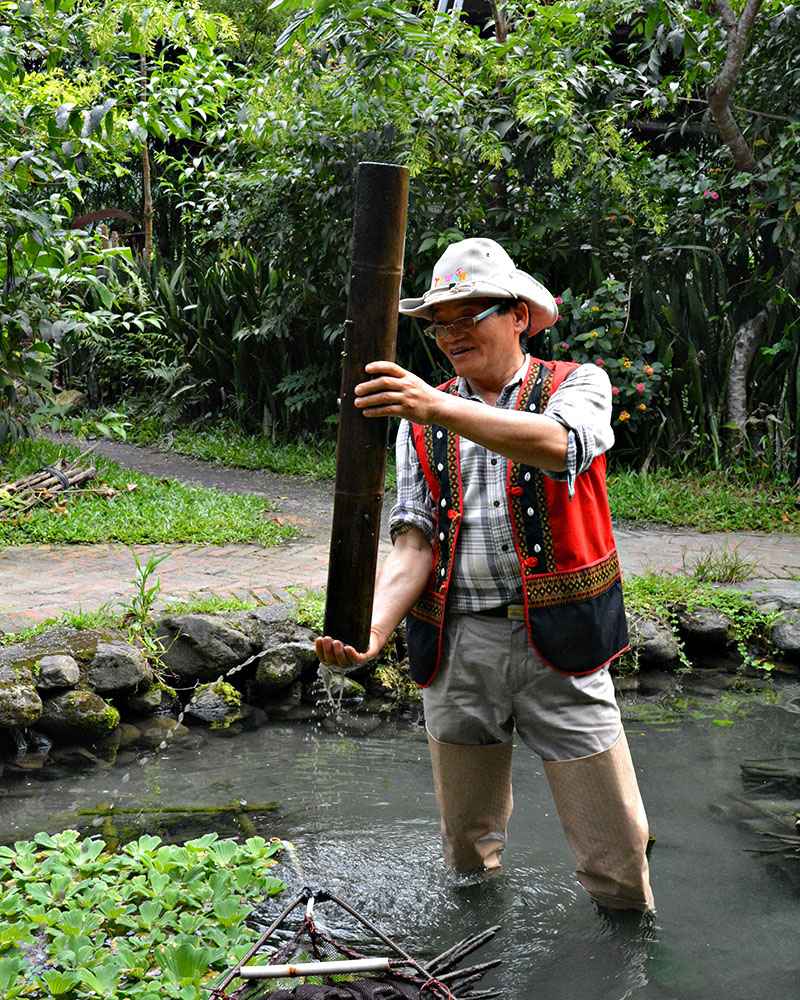 To cook our haul, Lalan pours water into a bowl folded together from betel nut leaf and adds watercress. Rocks plucked from a fire slip in next and finally fish, which cooks as the rocks release pent-up energy into the soup.

Taiwanese tourists flock to the Cifadahan Restaurant in Hualien to try the traditional hotpot. Woodcarvings chiselled by the owner, an Amis witchdoctor named Na Kaw, scatter the site. Here, juicy slabs of perch are boiled on a trolley next to your table. A dash of salt brings out the subtle flavour of the fish. It’s an excellent way to try this traditional meal without getting your feet wet, but nothing quite beats catching your own.

METHOD
Preheat oven to 200°C. Place the peanuts on a tray lined with baking paper and heat in the oven for five minutes or until they start to change colour.

While the peanuts are roasting, combine the sugar and two tablespoons of water in a medium saucepan. Stir over low heat until the sugar has dissolved. Turn up the heat and gently simmer for about 15 minutes, until it starts to thicken and turns golden. While it simmers, brush off sugar stuck to the sides with a pastry brush dipped in water.

Take the sugar syrup off the heat and add the peanuts and a pinch of salt. Stir until well coated and pour the mix back onto the baking paper-lined tray. Leave to set for at least an hour.

Remove the spring roll sheets from the freezer and allow to defrost before separating. Crush the peanut brittle with a mortar and pestle until quite finely ground. Lay the spring roll wrappers out flat and spoon crushed peanut brittle into the middle of each, reserving half. Place two scoops of ice-cream on top then sprinkle with coriander leaves and the remaining peanut brittle. Fold two sides in and roll each up like a spring roll. Eat immediately.

When it comes to roller coaster construction, surely the...

Getting set on fire isn’t everyone’s idea of a party, but...

When it comes to roller coaster construction, surely the general rule of...

Getting set on fire isn’t everyone’s idea of a party, but this rocket...