I am an ichthyophobic. I have an acute fear of catfish. With a gaping maw, angry eyes and more whiskers than an Akira Kurosawa samurai film, the catfish is every bit as ugly as it is terrifying. I fear them and I don’t trust them.

With some trepidation, I am in Vinh Long, Vietnam – the heart of the Mekong Delta, deep in catfish country. I came here with my travel companion, Adam, to journey from one side of the south to the other, and experience the Vietnam that travellers usually only dream about. Most visit from Saigon on a two-day package tour, rarely leaving the comfort of their air-conditioned buses or venturing far from the delta’s collection of tourist stops: textile warehouses, fisheries and conical hatstands. But we rambled into Vietnam from the Cambodia side, through a border crossing used to seeing only cattle farmers and fish tenders, not a couple of western boys with a yearning for something unique.

It takes us a few hours to make it to the delta backwater of Chau Doc, where we find ourselves a floating restaurant. We pop the tops on a few watery Saigon beers and laugh about the nine hours we spent rumbling over broken country roads listening to Cambodian pop music and dodging overloaded ox-drawn carts. I’ve wanted to sink my teeth into Vietnam for years and I don’t plan on easing into things. I ask our host to bring me something exciting and altogether delta to eat. Adam orders a hot dog.

Empty bottles pile up on our table like a flotilla of fishing boats. Our host returns with a bubbling hotpot, filled with tofu, chillies and assorted vegetables I don’t recognise. “This is wild boar,” he says. I wink at Adam, a smug expression on my face. I mouth the word “authentic” at him because I know he hates it. Adam looks at his hot dog, looks at my hotpot and orders again. “Bring me the wildest thing you’ve got,” he says, knocking the neck of his bottle against mine and filling up on liquid courage.

Eating boiled boar takes a bit of getting used to. It’s not the texture that bothers me – somewhere between ostrich and python, with an insulating layer of rubbery fat – but it’s the inch-long hairs that are firmer than toothpicks and get stuck between my teeth. When Adam’s amuse bouche arrives I feel much better about my own choice. A large Mekong oyster of dubious freshness looks back at him and smiles. Adam sprinkles a little salt over it and slurps it from the shell.

We meet Nguyen Trong Hoang after lunch. Hoang has just helped his uncle load a small boat full of bananas at Chau Doc pier and now he’s ready to navigate the delta causeways back to An Binh Island. Tomorrow, Hoang will deliver his payload to the floating market in Cái Bè, a destination considered by many to be among the most beautiful in all of South- East Asia. We ask if we can hitch a ride. Hoang does us one better and invites us over for dinner, but he doesn’t tell us that we’re going to have to catch it ourselves.

We ride high on a pyramid of bananas onto the delta, fighting off the scorching sun with our conical hats. When the water level gets too low, we hitch a ride the rest of the way to Hoang’s place with some local ladies. It would have been easier to organise the entire thing at the tourist information booth in Chau Doc, but it wouldn’t have been half as much fun.

We arrive at An Binh Island and Hoang’s stilt house, a quaint three-room chateau bounded by mangrove swamps, deep canals and low-hanging coconut palms. It is my romanticised vision of Vietnam brought to life. A gracious host, Hoang shows us his floating speak-easy and offers us a drink. Many delta households continue a tradition of distilling their own alcohol, and Hoang has become adept at crafting ruou de, a Mekong moonshine made from rice. Over a few glasses of ruou de I admit my childhood fear of catfish.

Hoang immediately forms a plan to become my very own aversion therapist. I probably should have explained to him the severity of my symptoms – how I shudder when the water ripples and how the thought of slick, slimy, scaleless flesh makes my stomach churn.

We dine on fresh fish and tell tall tales as the daylight wanes. The sun sets and we sink into our hammocks, time slipping away from us like silt between our toes.

But it’s too late. Of all things, Hoang invites me to try fishing for catfish with my bare hands – a practice known as noodling. I accept the invitation, to be polite and because my judgment is impaired by the ruou de. “The Mekong giant catfish is a member of the shark catfish family,” Adam says from a hammock where he’s sipping moonshine. “You’re essentially fishing for sharks. With your bare hands.” I tell Adam that his drink could be more than 80 per cent alcohol by volume and that he may be blind in the morning, but this doesn’t slow him down. “Sharks can smell fear,” he says.

“Catfish eat algae and plants,” Hoang laughs, encouraging me to dig a little deeper into the mud with my toes in search of a catfish burrow. “But these fish can grow to more than 200 kilograms,” Adam responds.

So I begin noodling, searching for my nemesis lurking in the mud. I don’t know whether I’m over my fear or thrilled at the prospect of the hunt. The only thing I can think of is coming up out of the water with a trophy fish. I feel a prick at the end of my fingers and I dive. I thrash wildly in an effort to corner the gargantuan beast and I sink closer and closer to the bottom, deep into the catfish burrow, with my net spread wide. I can’t see through the silt we’ve stirred up, but I know that I’m on the verge of a discovery. Finally, with nothing between me and the bottom but triumph, I strike, thrusting my net against the earth. I kick hard off the bottom and return to the surface, holding my catch exultantly in the air. I haven’t caught a catfish, Hoang tells me, but a brightly colored bass. It’s still big, though. “Maybe even two pounds,” Adam says, laughing.

We dine on fresh fish and tell tall tales as the daylight wanes. The sun sets and we sink into our hammocks, time slipping away from us like silt between our toes.

After our adventures in the delta are through, Adam and I commandeer an old Chinese pick-up and a wild-eyed driver to take us out to the coast, some 400 kilometers from Chau Doc. East of Saigon, rising out of the earth like a dragon’s backbone, are the arid sand dunes of Mui Ne, Vietnam’s east-coast curiosity. It’s a natural wonder where monolithic mounds fall directly into the ocean, like someone has decided that the desert and the sea should no longer remain mutually exclusive. On our trek into the dunes we meet a young boy of about 12 years old. He wants to sell me a ride on a magic carpet. It involves putting me on a sheet of blue plastic and shoving me down the dunes. It sounds like a fun trip – safer than surfing, more thrilling than fishing.

Steeled by my noodling triumph in the delta, I know what I must to do. The storm whips sand into my eyes and the turbulent South China Sea creates the perfect cerulean backdrop. I hand the boy a dollar, take the plastic carpet from his hands and launch myself out over the sand. The journey is remarkable in its brevity, tremendous in its scope. I make a few runs, Adam a few more. We empty the contents of our wallets into the boy’s pockets for the chance to race up and down over the dunes, losing track of time and how many times we have to dig each other out of the sand. The final time I brush the desert from my teeth the sun is setting and the light is right. We are here alone, the three of us, kings of the Kingdom of Sand.

We follow the dust out of the dunes and into Mui Ne’s oddly named Fairy Stream. Mischievous local village kids join us on our slog through the muck. We trek the canyon and hike up along the muddy ridges where Adam plays the kids a song on his guitar. From our vantage point we can see the red and white dunes and the lights of a thousand fishing boats beyond Mui Ne harbour, each hoping to return to shore with a heavy load of squid. We know where we need to be in the morning.

At daybreak the sun climbs over the hilly peninsula and illuminates the fishermen on the beach, hauling their long nets off the ocean floor. Scruffy dogs fight for the scraps that shake free from the net, while a boatman in a coconut skiff makes sure the net comes out of the sea straight and true. By the time the light allows us to see the entire beach we realise we’re the only foreign folk out here.

I know that when you pound sand hard enough it becomes glass; I didn’t know that the longer you stand in the sand the more magnetic it feels, drawing you deeper into new experiences. Vietnam is imbued with a visceral energy that inspires travellers to step out of their comfort zone and try new things. Eating raw fish when you know you shouldn’t, getting into a boat when you don’t know the destination, noodling, sandboarding and handing yourself over to chance are part and parcel to the essential Vietnam experience.

The Victoria Hotel in Chau Doc is the Mekong Delta’s most luxurious place to stay. It has a riverside pool and colonial suites.
victoriahotels-asia.com 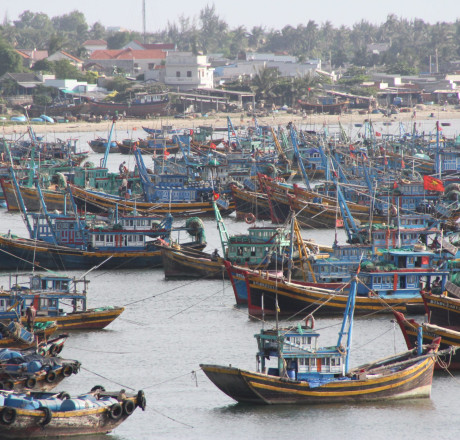 Vietnam will open its borders to the rest of the world from...

Vietnam will open its borders to the rest of the world from mid-March, in a move that the... 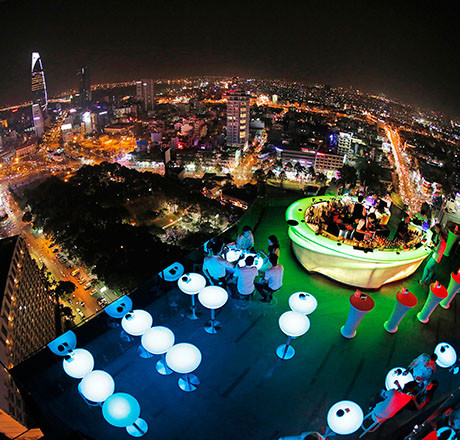 Boasting the brightest neon lights on the skyline and...

Boasting the brightest neon lights on the skyline and 360-degree views, Chill Skybar is... 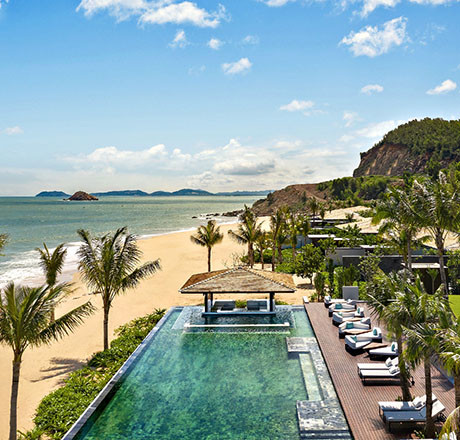 Perched on the edge of a perfect soft-sand beach in a part of...

Perched on the edge of a perfect soft-sand beach in a part of Vietnam so far undiscovered... 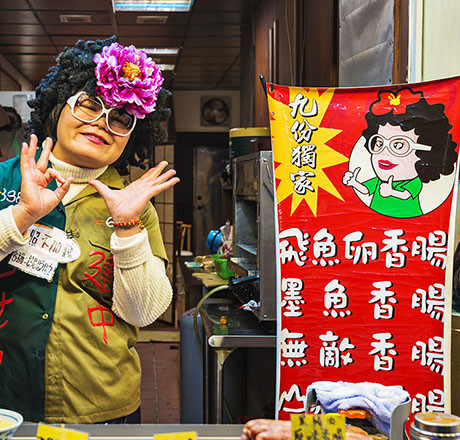 It’s the national airline, so Vietnam Airlines serves up a... 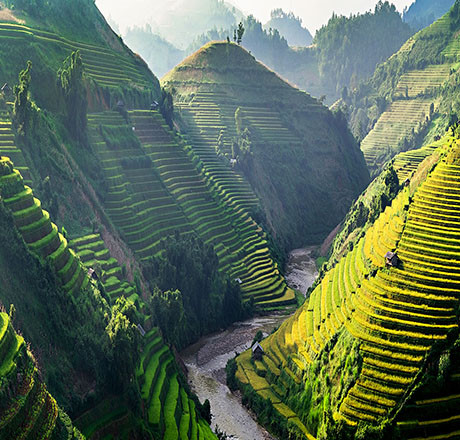 What do you get when you add a vintage Vespa trip in Ho Chi...

What do you get when you add a vintage Vespa trip in Ho Chi Minh City, kayaking in Phong... 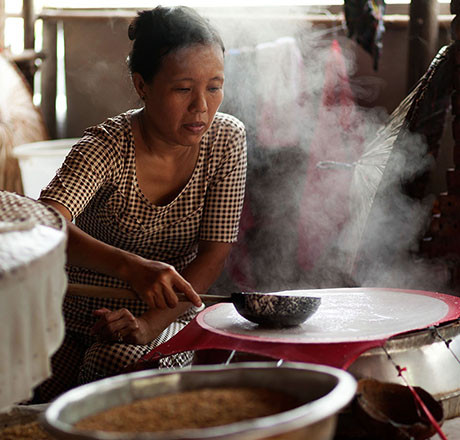 While some will try to convince you that the iridescent...

While some will try to convince you that the iridescent seascapes of Halong Bay, Hanoi's... 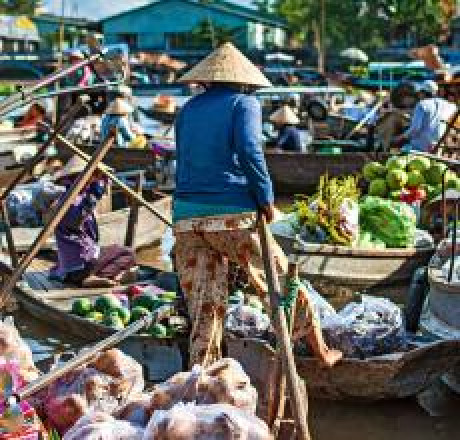 Forget crowded supermarket aisles and checkout queues. At the... 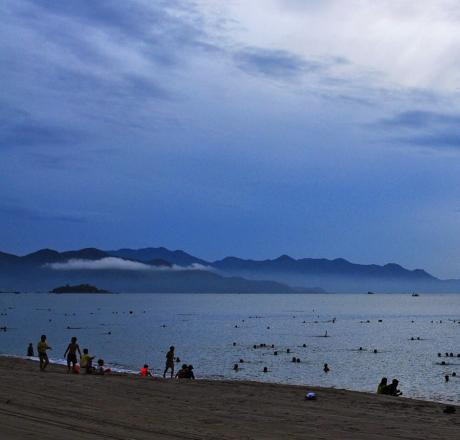 An early wake-up in the Russian holiday hotspot of Nha Trang...

An early wake-up in the Russian holiday hotspot of Nha Trang isn't necessarily a bad... 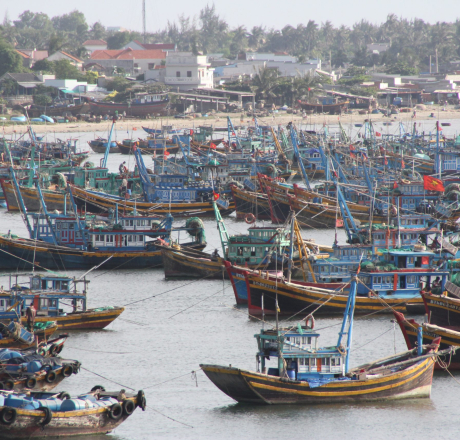 Vietnam will open its borders to the rest of the world from mid-March, in a...

Vietnam will open its borders to the rest of the world from mid-March, in a move that the... 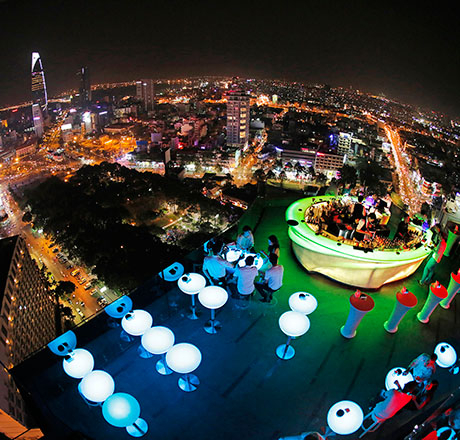 Boasting the brightest neon lights on the skyline and 360-degree views, Chill...

Boasting the brightest neon lights on the skyline and 360-degree views, Chill Skybar is... 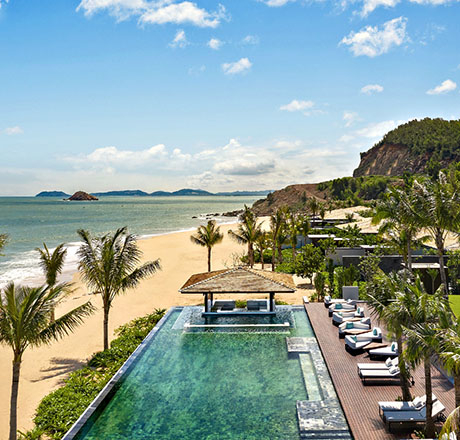 Perched on the edge of a perfect soft-sand beach in a part of Vietnam so far...

Perched on the edge of a perfect soft-sand beach in a part of Vietnam so far undiscovered... 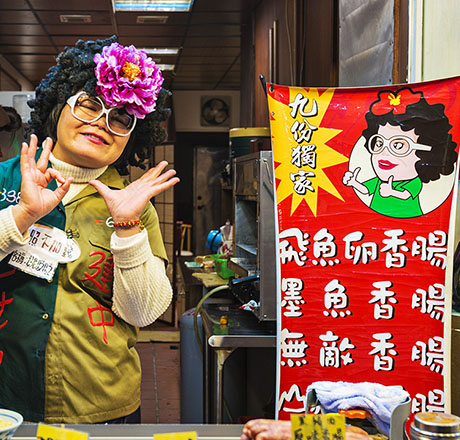 It’s the national airline, so Vietnam Airlines serves up a very different...