We Are Explorers’ Emily Barlow shoulders her pack and tests out the first phase of the Grampians Peaks Trail.

Thirteen days, 160 kilometres and the ancient mountainous region of the Grampians National Park (Gariwerd in the Jardwadjali language) in northwest Victoria. If you're looking for a less vigorous trek, make a plan to tackle Stage One, a two-night, 36-kilometre loop from Halls Gap to Bugiga Hiker Camp and back via Borough Huts Campground. There’s also the option of organising a pick-up from that final site to make it an overnight trip, which is my grand plan.

The hike shows off two of the park’s popular peaks, the Pinnacle and Mount Rosea, each of which comes with a steep climb rewarded with stunning panoramic views of the surrounding mountains and farmland. It’s a real tease, giving you a sneak peek into what will undoubtedly be a special experience when the full trail opens.

I wake early at Plantation Campground, just outside Halls Gap. After fuelling up on coffee at local cafe Harvest, I start my solo trip from the head of the Wonderland Loop trail on a clear, hot summer day. The trail steers out from behind the Halls Gap Caravan Park and quickly enters a beautiful gum forest, before crossing a dry river and meandering beneath soaring sandstone rocks. A steady ascent leads to a series of pools called Venus Baths, which, in rainier seasons, would be filled with crisp, cool water. After a seriously long drought and an already blistering summer, it’s unsurprising that only two pools have water trickling into them. Regardless, I consider the shoulder-deep water enough to warrant a break to cool down.

An exposed rocky path leads up through the Grand Canyon. Ancient sandstone forms boulders and twisted chasms and I have fond flashbacks to visiting this area as a kid. The landscape dwarfed me back then, and it still does.

Families and groups visiting from the city join me on the trail to conquer the Pinnacle as a day hike. After a lunch break overlooking Halls Gap and Lake Bellfield, I quickly lose the crowds as I continue my trek toward Bugiga Hiker Camp, the first of many new camping grounds built to service the Grampians Peaks Trail. After a few hours walking in direct sunlight, the last section between Sundial Carpark and the camp is a welcome relief, shaded, as it is, by tall grass plants and banksias.

Bugiga Hiker Camp is a sustainability-focused stopover consisting of 12 round wooden platforms connected by a boardwalk. Each of the pre-booked platforms has enough space for a tent and faces out to the eucalypt forest or Mount William. There’s a central shelter built from rusted red iron, two pit
toilets and a water tank. Everything else has to be brought in and out by hikers, including between three and four litres of drinking water for each person. Fires are not permitted.

Here I while away the afternoon reading and watching small robins hunt for seeds until the sun slowly sets behind Mount William. Only two other people arrive for the night. The definition of solitude! 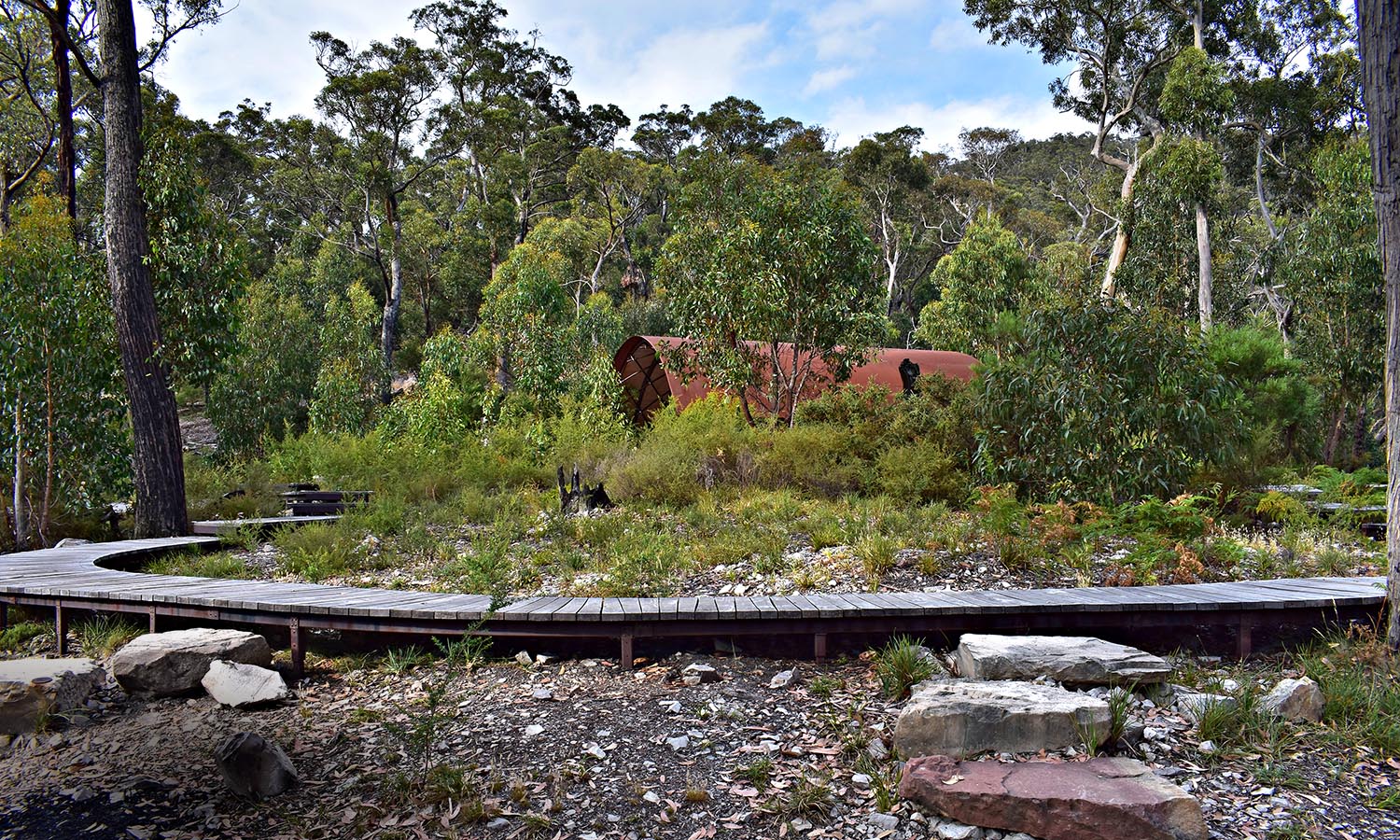 The start of the second day’s hike moves through tall eucalypt forest before opening up to a rocky path that seems to head continuously upward. With a pack on it is definitely strenuous, but I pause frequently to look back across the valley. It’s here I start to appreciate the scale of this national park, which covers more than 1,600 hectares.

Gariwerd is a spiritual place for the Djab Wurrung and Jardwadjali people, as it is central to Dreaming stories and once provided an abundance of food, water and shelter. More than 90 per cent of Victoria’s rock art sites are here, in Gariwerd.

On reaching the vertical lookout at Gate of the East Wind, an expansive view of Lake Bellfield and the surrounding mountains is laid out before me. The path then twists and turns beneath and around boulders, requiring a fair amount of rock hopping and climbing along the ridgeline.

After about two-and-a-half hours following the trail towards the sky, I reach the peak of Mount Rosea, a rocky plateau with an elevation of 1,009 metres and 360-degree views over Mount William and the Serra Range. I bask in the sun drinking coffee and snacking, a few other people nearby doing the same. 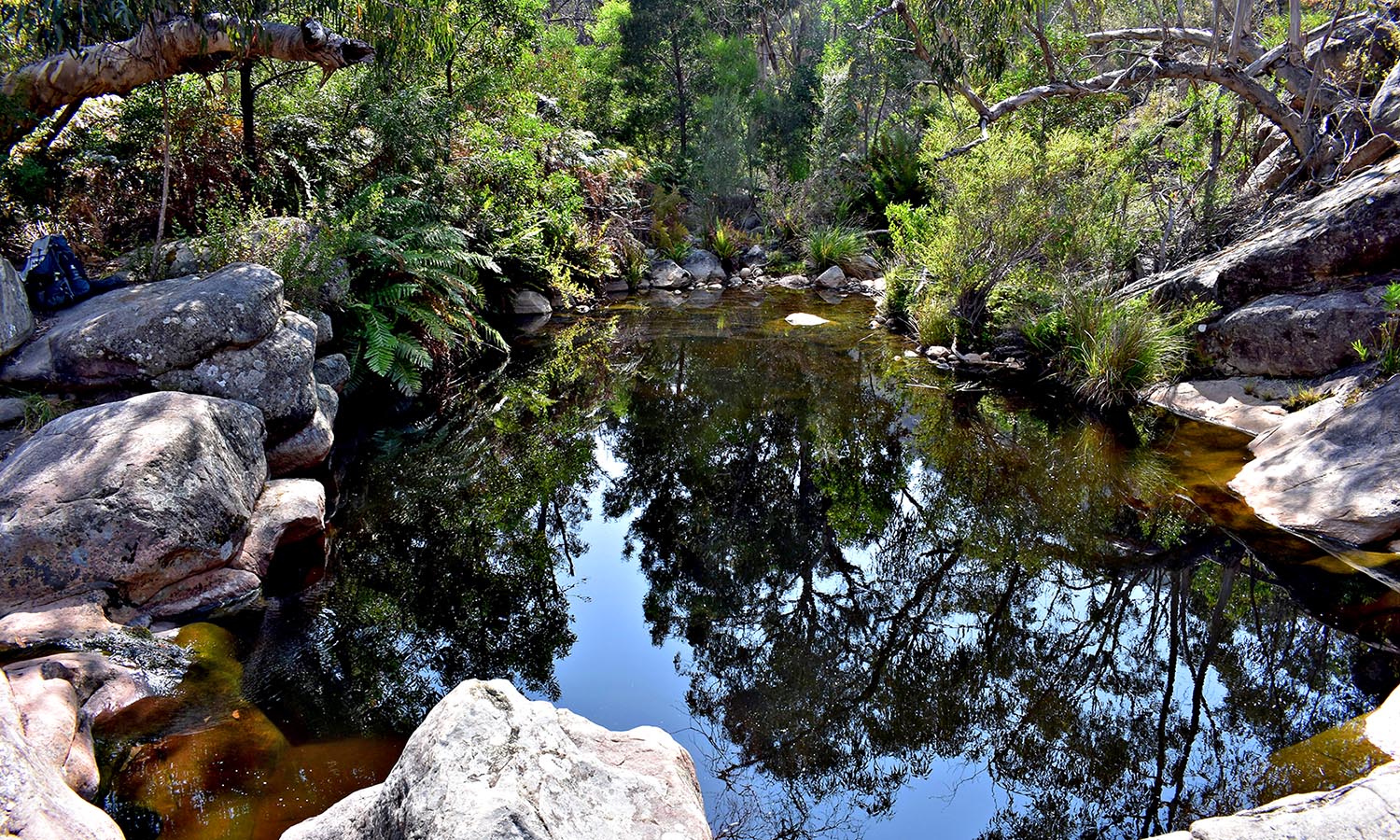 The cool pools of Venus Baths. Click to view gallery

After some rest, I embark on the descent, following a series of large rock steps into a banksia- and fern-lined forest. By this point, I’m fairly fatigued, but the path soon becomes an easy bushwalking track shaded by gums. It meanders until it reaches a clearing with a small river crossing and signs for Borough Huts Campground. It’s possible to stay here for the night and take the 14.2 kilometre trail around Lake Bellfield at the base of the Mount Williams Range, finishing at Halls Gap. For me, though, this hike is over. I’ve arranged the shuttle service and my car is waiting for me. Now, I’ll bide my time until December, when the entire trail is due to open.

We Are Explorers is an online magazine featuring Aussie adventures and backed by a community of explorers.

Head to weareexplorers.co to start planning your next wild adventure.

Before and after your hike, you can camp or rent a cabin at Halls Gap Caravan Park. The Grampians Peaks Trail head is close by. Campsites start at AU$33 a night; cabins from AU$105 a night.
hallsgapcaravanpark.com.au

Grampians Peaks Trail is well signposted, but has steep sections and obstacles. It’s only suitable for experienced and prepared hikers. The rest of the trail is due to open in December 2020.
parks.vic.gov.au

Grampians Peaks Walking Co offers a number of guided tours of Grampians Peaks Trail if you don’t fancy heading out on your own. It can also organise gear hire, food and water drops at both Bugiga and Borough Huts, and a shuttle service from Borough Huts.
grampianspeaks.com.au