Gone for a song

Gone for a song

Pack your tent, brave the heat and take on the Jatbula Trail, a hike that follows an ancient Songline through the landscape of Nitmiluk National Park.

Prepare yourself for a tale of magic roads, banshees in the night and conquering sea stacks.

According to oft-repeated hikers’ wisdom, cotton kills. It’s a dictum that rings true across most of Australia, as anyone who’s ever been caught out in a cold, wet t-shirt can attest. But on the Jatbula Trail, an outdoor-ed teacher named Elly has turned that belief on its head.

With the accumulated wisdom of a season spent in the Top End, she’s hiking across the southern edge of the Arnhem Land escarpment with an infectious grin and a cotton shirt that she drenches at every opportunity. “Cotton cools,” she says, extending her o’s with a laugh as she puts the sopping wet tee back on.

In nearby Katherine the temperature is close to 40 degrees. Here on the bare escarpment the rocky ground radiates the heat back up at us and it’s hotter still. For the first time I can recall, I curse my synthetic moisture-wicking shirt.

“You’re going to get pretty warm,” the grizzled ranger warned me at the compulsory pre-hike briefing. It echoed advice I’d already heard, but I’d also been told repeatedly that it was worth braving the heat for one of the most beautiful hikes in Australia. Our party of five includes Dan, a film producer from Sydney, and his German friend Anne, who lives up to the stereotype by being the most organised of us; Tom, a perpetually smiling hydrologist who has spent much of his career in the South Australian desert; and Chris, a Melbourne-based journalist who insists he’s not a hipster hiker, but who bought a new portable coffeemaker specially for this trip.

Pre-warned of the soaring temperatures, we’re keen to get an early start and rise before dawn on day one. Skittish wallabies form a guard of honour by the roadside on the half-hour drive from Katherine to Nitmiluk National Park. A golden glow is creeping above the horizon and our windscreen frames the fast-rising sun directly ahead.

After a short boat ride across the Katherine River, we step off between broad trees and pandanus palms into knee-high grass that shimmers in the early morning glow. Closer to ground level, the view is slightly less magical. A disturbingly large pyramid of dung has been deposited in the middle of the path and, despite earlier voicing his hope for plenty of wildlife sightings, Dan takes one look at the giant mound and declares, “I don’t want to see a buffalo any more.”

The first section of the walk follows the base of the escarpment and we enjoy the shadow it casts even in the early morning cool. It won’t last long; as we walk, the sun creeps over burnt orange rocks, dry yellow grass and spindly white gums with crowns of green. Climbing out of the shade and onto the escarpment, the air seems to hum gently with heat and I’m grateful that the first day is a short one. With only 8.3 kilometres to cover we reach camp by 10am.

By then it’s already baking hot and the sound of running water is like music to my ears. Without hesitation I drop my pack, cast off my clothes and follow the sound to a series of small falls at Biddlecombe Cascades. Despite it being the dry season, they look anything but to me, and I gleefully jump in the top pool then scramble down over the rocks to get a strong massage at the bottom of the falls. Because we’re on top of the escarpment, there’s no need to worry about crocs – we checked, multiple times – but I still start when I hear Chris screaming my name. Rushing back to camp, I find a jagged hole torn in the top of my pack, muesli everywhere and even a few zips tugged open. I shake my fist at six red-tailed black cockatoos sitting watchfully in a nearby tree before a harsh, mournful caw behind me informs me that I’ve accused the wrong birds.

Having secured my bags more carefully, I head back to the cascades. With bubbling spas, placid pools ringed by sparkling sundew plants, rocks perfect for jumping off and even a small cave hidden behind a fall it’s like a private waterpark. And, for a few hours, it’s all ours. One of the great joys of the Jatbula is that it’s never crowded. A maximum of 30 permits are issued each day (15 for self-supported hikers, 15 for tour operators), but we’re walking late in the season and only have four other hikers with us at camp each night.

The trail guidelines ask hikers not to wear sunscreen because it damages the waterholes. Knowing this, we plan to take regular breaks in the shade, but camping next to the falls proves too tempting. After a day spent lounging by the pool, Hollywood Dan looks like a red-breasted robin and serves as a warning to the rest of us throughout the hike.

The waterholes provide much needed respite from the heat, but they’re far from the only highlights of the trail. During the days we walk through stone country, where rocks criss-crossed with fracture lines are surrounded by dry grass the colour of straw. Bloodwood trees ooze bright red sap that crystallises where it falls and sparkles in the sun like piles of garnets. We walk between termite mounds scattered like gravestones in a poorly organised cemetery – over six days they change with the colour of the soil from white to yellow and deep red before turning a tired, dusty grey. The clifftop views from the edge of the escarpment – rocky red bluffs that seem to glow in the early morning sun protecting a broad valley of dry yellow grass streaked with white gum trunks – are worth the days of walking.

Even more arresting is the rock art hidden under overhangs near the track, evidence of the area’s continuing importance to the Jawoyn Traditional Owners. This is unforgiving country and water is essential to survival. It’s why the Jatbula Trail follows a Jawoyn Songline, an ancient route that connects the permanent water sources along the escarpment. These magical spots have hosted countless generations and we get a sense of that longstanding connection at the trail’s most spectacular stop.

The air in the Amphitheatre is still and muggy, but the wide natural bowl offers welcome protection from the sun. Water seeps through large hanging gardens of ferns before trickling down to a thin creek on the valley floor. On the surrounding rock face, more than a hundred open-air art galleries depict Jawoyn People, spirits and animals in ghostly white, mustard yellow and deep red ochre.

Some are recent additions, but others have been here for thousands of years. And they cover every available flat surface. It’s a place of wonder, but also great peace, and we linger for hours before resuming our walk, marvelling at the longstanding connection with Country in a place where past, present and future seem to fuse.

We take our time rearranging our packs before continuing, and our ever-smiling hydrologist uses the brief pause to whip out a book. His propensity to read at every drink break has earned him the nickname Two Page Tom, but there are times when the stultifying heat means I’d happily let him finish an entire novel before emerging from the shade.

On my map the Jatbula Trail looks like an easy hike. It’s mostly flat and the distances are manageable, but it’s absolutely crucial to take regular breaks because of the sapping heat. The 62-kilometre walk takes five or six days and, as we traverse the sandstone plateau, the environment becomes increasingly tropical. Dry buffalo wallows appear with increasing frequency, along with piles of fresh dung and wafts of pungent urine. It’s a wild landscape, a place where humans seem like the most temporary of visitors, and I keep expecting to round a corner and find a giant beast with wide horns ready to chase us out. But the stillness is broken only by the chirp of cicadas (whose “nit, nit, nit” call gives the park its name) and the attention-demanding screech of a sulphur-crested cockatoo. Occasionally a grasshopper buzzes in front of me, roaring like a biplane as it takes off.

We walk past sharp clumps of sword grass that threaten to slice any exposed skin, beneath lush palms and across bone-dry riverbeds. This is the paradox of the Top End in the dry season – it’s an incredibly fertile landscape with no visible water.

It makes us appreciate the waterholes by each campsite even more. At Sandy Camp, a giant circular pool is ringed by tall paperbarks full of birdlife and grevillea whose flowers resemble long, curling eyelashes. Scraggly blue-winged kookaburras, unrecognisable as relatives of their southern cousins, give a stifled laugh and the iridescent wings of rainbow bee-eaters catch the sun. There are even enough fish to attract cormorants, although they disperse as we gleefully dive in.

“How’s the water?” Elly calls out as she strolls into camp with a grin. It’s perfect, I tell her. A cotton t-shirt might be a surprisingly good outfit on this Australian hike, but fortunately it’s not the only way to stay cool on the Jatbula.

Jetstar, Qantas Airways, Airnorth Regional, and Virgin Australia all fly into Katherine from major cities in Australia. The trails begins at Nitmiluk Gorge which is 27km from the town of Katherine.

The Jatbula Trail is a 62km one way walk departing from Nitmiluk Gorge and finishing at Leliyn in Arnhem Land.

The trail is named after Jawoyn Traditional Owner, Peter Jatbula, who was instrumental in securing land rights for the Jawoyn people.
NT GOV
nt.gov.au 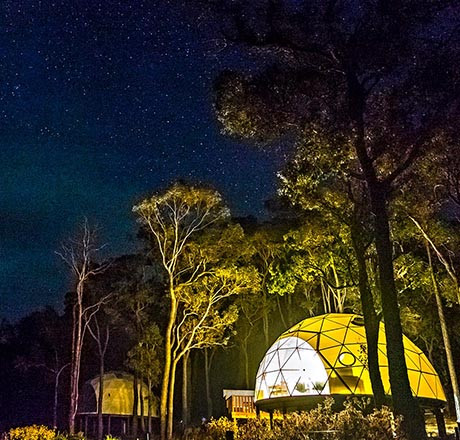 These futuristic pods set on the edge of a forest and...

These futuristic pods set on the edge of a forest and overlooking farmland take camping up... 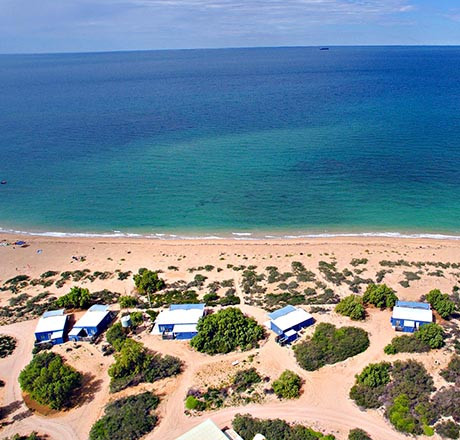 Set off the Pilbara coast in the Indian Ocean, Thevenard is...

Set off the Pilbara coast in the Indian Ocean, Thevenard is the kind of spot you dream... 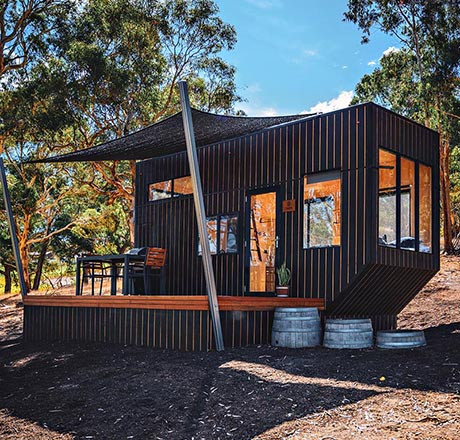 Kick back in the country and get a taste of tiny living with...

Kick back in the country and get a taste of tiny living with this cute little cabin, named... 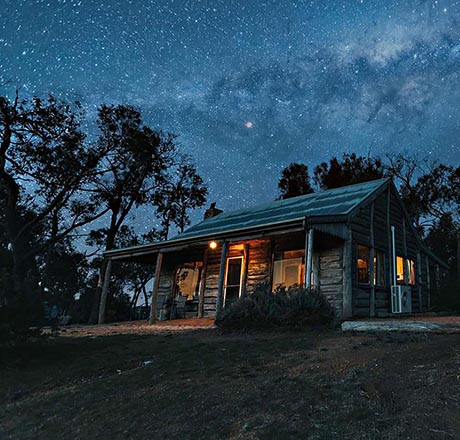 If you’ve never been to this part of Victoria you’re...

If you’ve never been to this part of Victoria you’re missing out. Halls Gap is at the... 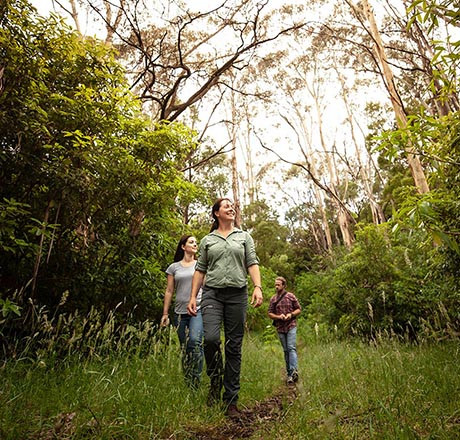 Experience the Australian bush, incredible landscapes and native animals with an... 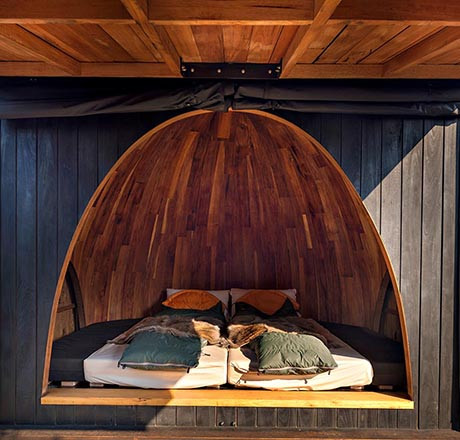 do
Cultural...
Cultural homeland of the Palawa in...
EDDYSTONE POINT, TASMANIA

A pioneering hike guided by the palawa Indigenous community...

A pioneering hike guided by the palawa Indigenous community offers a deeper, nuanced... 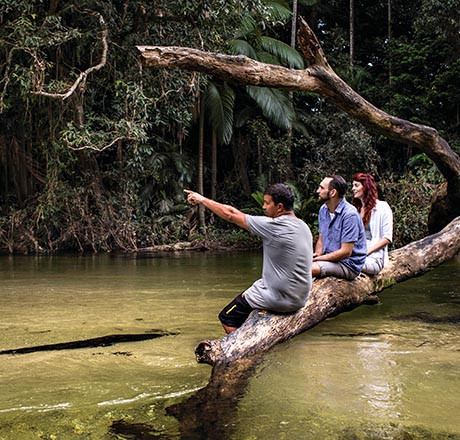 Explore the beauty of the Daintree Rainforest, with a local...

Explore the beauty of the Daintree Rainforest, with a local Aboriginal guide on Walkabout... 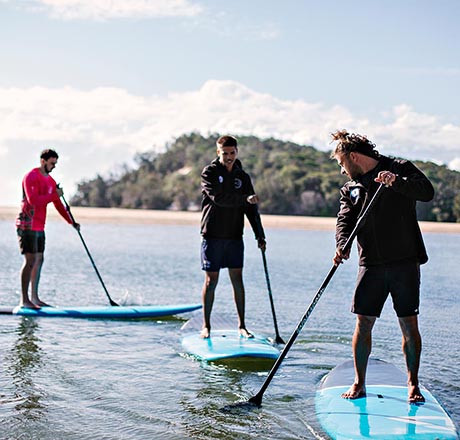 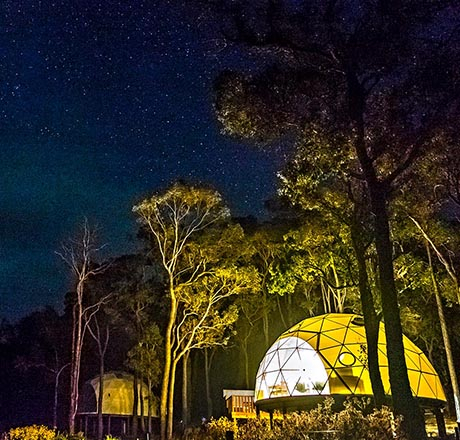 These futuristic pods set on the edge of a forest and overlooking farmland...

These futuristic pods set on the edge of a forest and overlooking farmland take camping up... 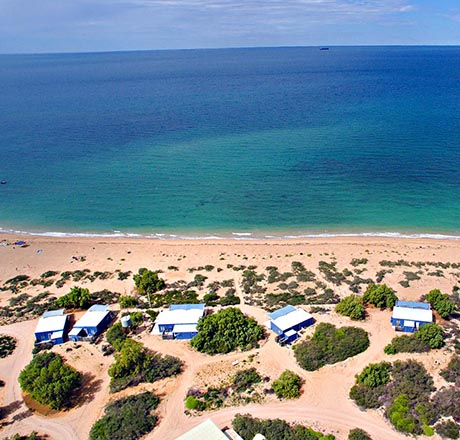 Set off the Pilbara coast in the Indian Ocean, Thevenard is the kind of spot...

Set off the Pilbara coast in the Indian Ocean, Thevenard is the kind of spot you dream... 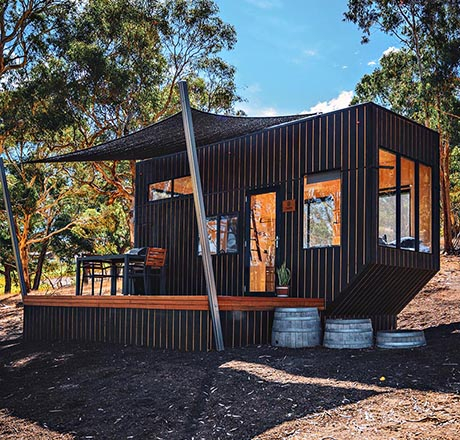 Kick back in the country and get a taste of tiny living with this cute little...

Kick back in the country and get a taste of tiny living with this cute little cabin, named... 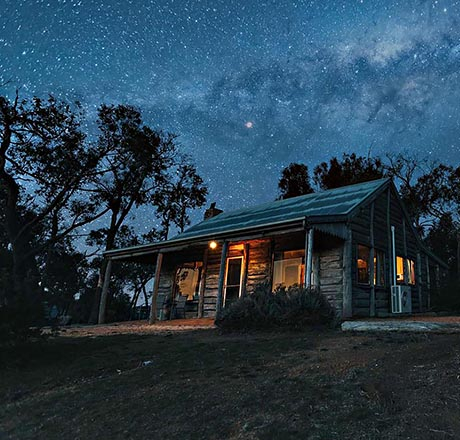 If you’ve never been to this part of Victoria you’re missing out. Halls...

If you’ve never been to this part of Victoria you’re missing out. Halls Gap is at the...