Home is where the heart is

Home is where the heart is

Fed up with the corporate rat race, a lost American traveller hit the high seas and dreamed of being shipwrecked in the South Pacific. Decades on, he would leave behind one of the greatest barefoot luxury legacies in the world.

Welcome home! is the joyful cry we hear from a bunch of broad smiles beckoning us from the beach.

At first I’m confused and before I can ask my wife if she’s ever been here before (and neglected to tell me) she’s whisked elegantly onto the shoulders of two buff shirtless Fijians, waist-deep in the aqua blue water surrounding our private seaplane. She’s carried like a queen onto the white powder sand of Turtle Island, a little slice of perfection in the Yasawa Group of Islands north west of Fiji’s main island Viti Levu.

By the time the same two men have carried me ashore – nowhere near as elegantly – she has a glass of champagne and a smile as broad as the locals surrounding us.

“There’s no place like home, hey sweetheart?” I ask, just as her glass is topped up for the second time.

Done with the stresses of corporate success in the US, Evanson had cashed out in 1972 and headed for Australia to see what else life had to offer. Along the way he found himself waylaid in Fiji, and stumbled upon the then barren Nanuya Levu island in the Yasawa Islands.

It was this chance encounter with a 202 hectare patch of dirt in the middle of the pacific, thousands of kilometres from his previous life, that he decided then and there that island life was to be the life for him.

“There’s no place like home hey sweetheart?” I ask as her glass is topped up for the second time.

After buying the island, Evanson set out to create his dream. He planted thousands of seedlings, befriended the locals from the surrounding villages and settled into a life where time was more elastic. This was my dream I thought at the time, I just needed the corporate success.

The arrival of a film crew in the late 1970s gave Evanson a taste for entertaining guests on his patch of paradise. The idyllic blue lagoon of Nanuya Levu was the perfect location for the film of the same name and Evanson looked after the cast including Brooke Shields, while the film was shot.

Having enjoyed the experience so much, he opened Turtle Island to the public in 1980 and therein lies the secret to the resort’s magic: the island bliss that existed had already been authenticated by the man himself first, before it was opened to the rest of the world.

Evanson was living a barefoot luxury life before the term was even coined and obscenely overused in modern travel brochures. It's now an entrenched legacy and a way of existence for the team that hosts guests at Turtle Island. There’s no pool. There’s no kid’s club. In fact, for the vast majority of the year the island is exclusively open to adults (except for a few weeks of the year where families are welcome). There’s no buffet, limited internet or signal and certainly no screens, other than an outdoor cinema that shows The Blue Lagoon on repeat. But what it lacks in modern resort excess, it more than makes it up in pure adult indulgence. Imagine being shipwrecked on a South Pacific island that also happens to be fully stocked with everything you could ever dream of, not least some of the friendliest locals imaginable.

Our first breakfast is on the beach at a long shared table. Most of the other ten guests join at their leisure. Local legend Arthur, who was just a child when Evanson arrived in 1972 and has worked at Turtle Island ever since, strums a guitar and sings a local tune. There is the sense he’s not performing for us - he just enjoys singing. There is a turtle shaped blackboard in the sand with a list of the day’s activities. Horse riding, scuba diving, game fishing, village visits and a list of the island’s 12 private beaches to choose from for a lazy day in the sun. 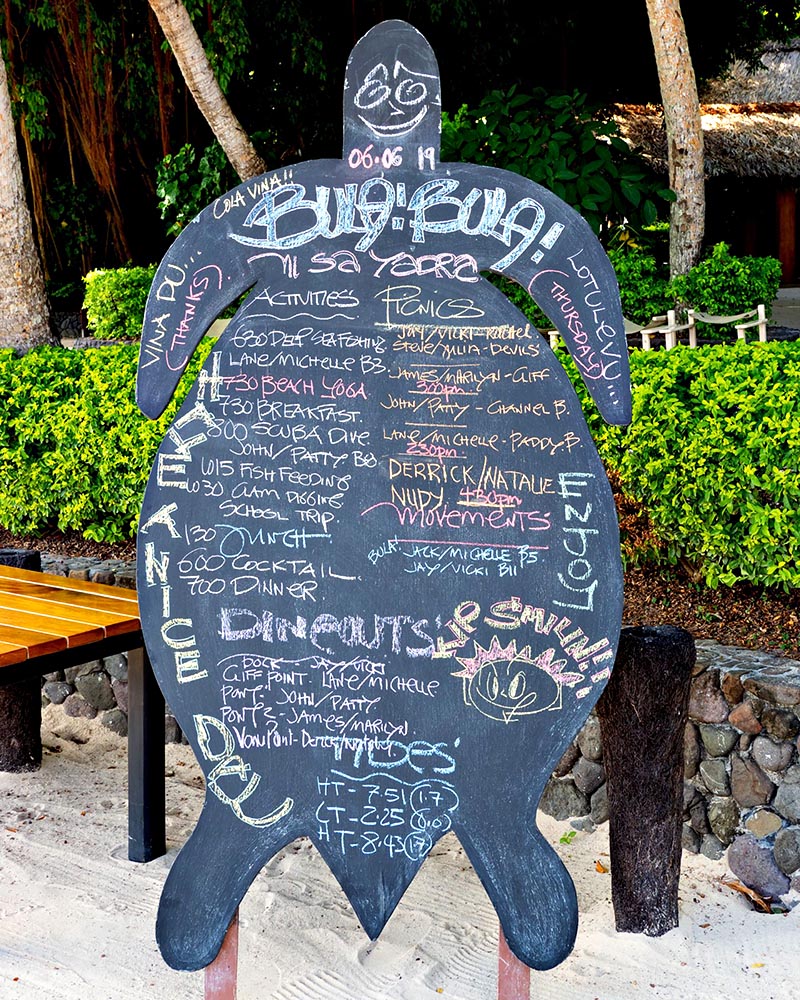 The blackboard of decisions. What will we do today? Click to view gallery

Having decided Long Beach would be our destination for the day, we’re on a golf cart with a smiling Fijian named Bill driving us through palm trees to our own private beach. Smiley Bill stops to turn a coconut sign to ‘occupied’ just to ensure our privacy from the other smattering of guests who probably have their own beach as well. He sets us up with a cooler filled with French champagne, beer, wine and a gourmet lunch. With a smile and a wink he disappears, crying out from the distance “Have fun Jay and Vicki!” There’s a hammock strung between two palms and an undercover picnic area with an outdoor setting and table. We crack the champagne and set up camp on the soft white sand. It is perfect.

We crack the champagne and set up camp on the soft white sand of the aptly named Long Beach. It is absolutely perfect.

In addition to the 12 private beaches, you can choose to dine on a floating pontoon, at the end of the main pier or in the comfort of your luxury oceanfront Bure. Ours happens to be equipped with an indoor spa.

Our favourite is the Cliff Point with its own plunge pool on the edge of the lagoon. There are few better places in the world for an after dinner dip.

With a dedicated ‘Bure Mama' (the island equivalent of a luxury hotel butler but more more adept) you could quite conceivably see no one else but her, if you so choose. But to do so would be to miss out on the real charm of Turtle Island: its people.

Like most places in Fiji, evenings on Turtle Island invariably end up around a kava bowl, with resort staff and guests alike joining Arthur’s guitar sessions. The guitar is passed around and shared as ceremoniously as said kava bowl. I’m passed the guitar and much to the delight of the crowd I bang out a terrible version of Johnny Cash’s Folsom Prison Blues. Kava, I discovered, is not great for finger picking.

“Bula Jay!” my evening singing buddies cry out with laughter, their teeth glinting in the night as bright as the stars in the sky above them.

One majestic afternoon snorkelling the clear waters of the lagoon, Arthur joins us for a swim just because he can.

He laughs hysterically as he throws bread crumbs to attract a school of multicoloured fish around my terrified wife. Arthur walks us back to shore and right on cue, his torso still glistening with water in the afternoon sun, he says his goodbye, reaches for his sandy guitar and makes his way to another group of unexpecting guests on the beach.

Such is the love from Arthur and the rest of the staff on the island that when it is finally time to pack our bags, it doesn’t feel like we’re heading home - it feels like we’re already there.

get lost would like to extend our deepest sympathies to our Turtle Island friends on the passing of both Arthur Sladden and Richard Evanson in 2021.

What Richard has created will leave an incredible legacy for sustainability in the Yasawas and should be a benchmark for barefoot luxury around the World.

Fiji Airways has direct flights out of Australia from four capital cities: Melbourne, Sydney, Brisbane and Adelaide. Fly from Sydney to Nadi from AU$800 per person return. Turtle Airways can also organise an internal transfer to Turtle Island on a private seaplane from AU$680 per person return. Or you could take the ferry which is a nearly five-hour journey but only approx AU$90.
fijiairways.com

A stay in one of Turtle Island’s Grand Beachfront Bures is not cheap, starting at AU$3,690 per night all inclusive. Bear in mind this includes absolutely everything and everything is top shelf.
turtlefiji.com

Alternatively, a more affordable option in the Yasawa Island Group is Oarsman Bay Lodge with an Ocean View Bure for two people around AU$250 per night, including breakfast.
oarsmans.com

The Fiji crested iguana (a new species) was discovered during the making of the 1980 version of The Blue Lagoon. It features throughout the film. Some say it was the best actor.

Turtle Island has a minimum stay of five nights which also includes two 30-minute complimentary massages. The all inclusive package also includes fishing, horse riding and other water sports which you’d normally shell out more coin for at an ordinary run-of-the-mill resort.
turtlefiji.com 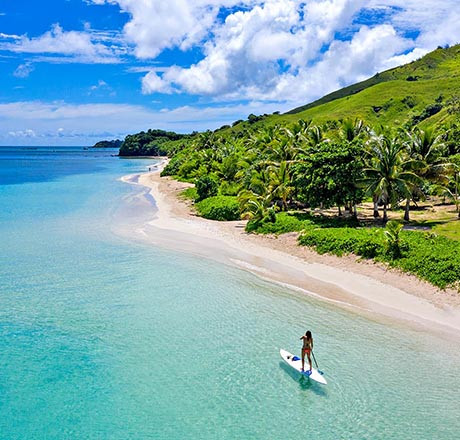 Typing Yasawa into a search engine is enough to work out that... 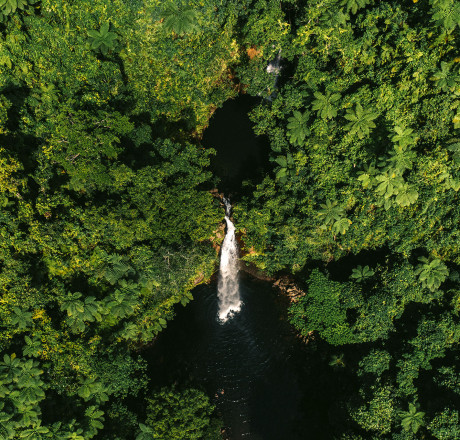 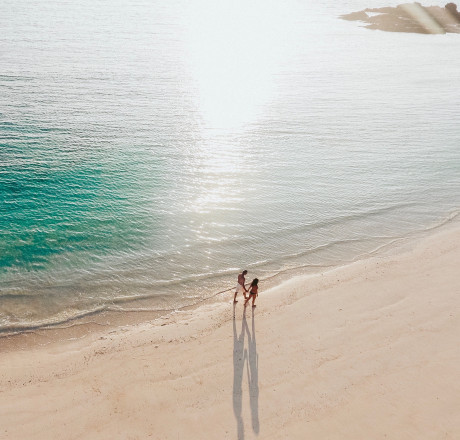 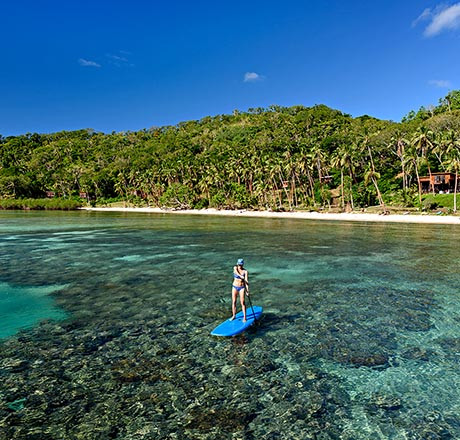 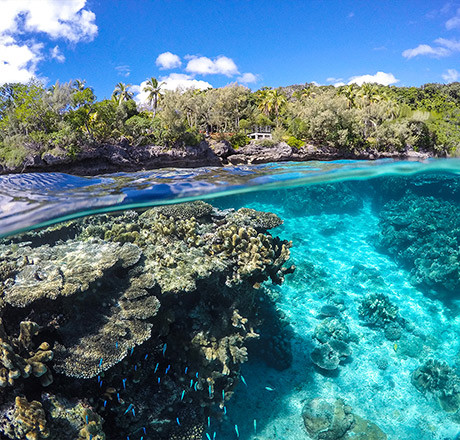 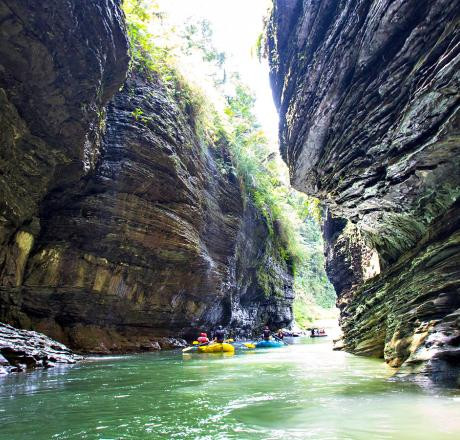 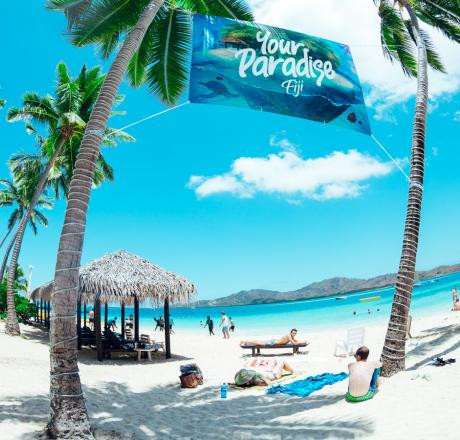 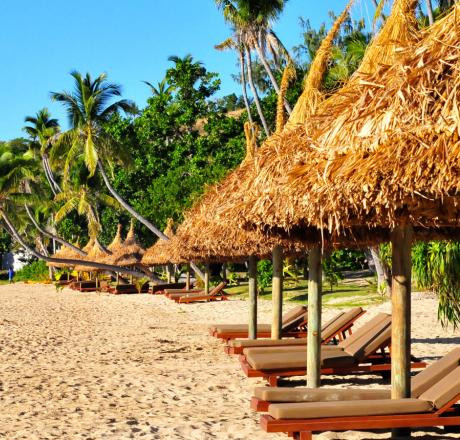 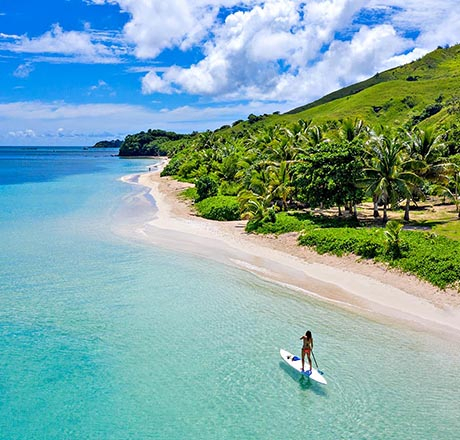 Typing Yasawa into a search engine is enough to work out that this remote... 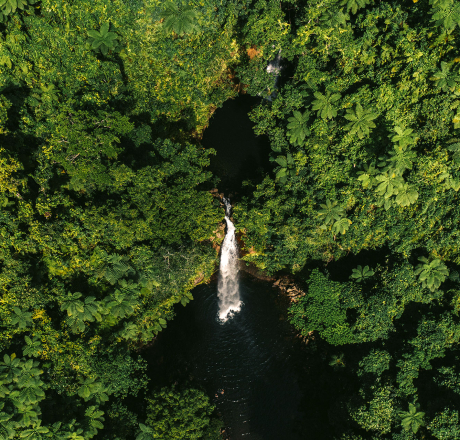 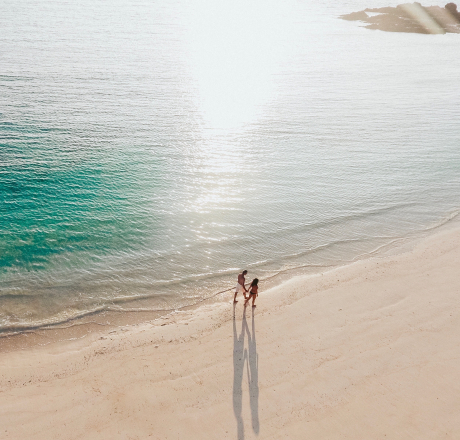 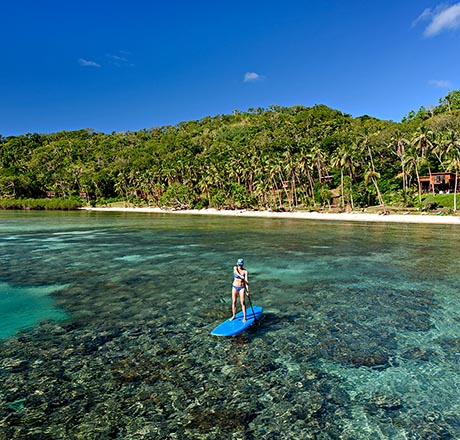