Party district Lan Kwai Fong is where it’s at for a good time in Hong Kong. Or is it? Samantha Kodila eats, drinks and dances her way from Kowloon to Hong Kong Island.

Hong Kong is a city of such immense proportions it can be hard to know how to tackle a night on the town. The popular approach is to venture to Lan Kwai Fong, where nightclubs nest among the swanky malls and streamlined buildings of Hong Kong Island’s financial district. But sticking here offers a woefully shallow view of a metropolis rich in culture. Start, instead, in the Kowloon district and creep down to Hong Kong Island as the night goes on. Home to the largest mix of ethnicities in Hong Kong, Kowloon welcomes fewer tourists than other districts, yet it’s a melting pot of the best markets, street food, temples and museums, all among some of the busiest neighbourhoods in the world. Armed only with a handful of Hong Kong dollars, you can easily devour dim sum, wander through frond-filled parklands, explore ancient sites of worship and dance in speakeasies all within a few short hours.

4pm
Hong Kong has a proud history of film, and although state-of-the-art cinemas premiering the latest Hollywood blockbusters have infiltrated the country, indie and international films reign supreme at Broadway Cinematheque. Concealed within the towering white buildings of a housing estate, Hong Kong’s only art-house cinema has been a delight for culture seekers for more than 20 years. You won’t find the regular mod-cons here; there’s no plush carpet or central cinema seating, but you will revel in its retro charm while watching a film with English subtitles from the embrace of a cushy red seat. Afterwards, dissect the script over coffee in Kubrick, a cafe and multilingual bookshop full of knick-knacks, just next door.
Broadway Cinematheque
3 Public Square Street, Yau Ma Tei
bc.cinema.com.hk

6pm
Return to the present and enter the rush of Temple Street Night Market. Just a short stroll from the cinema, this bazaar offers everything from clothing and handbags to electronics and paintings, and the absence of marked prices invites bargaining. Fortune tellers sell glimpses of the future and the hauntingly beautiful croon of Cantonese opera singers occasionally cuts through heady air permeated with the smells of lobster and duck cooking in surrounding dai pai dongs (street-food restaurants).
Dome
Temple Street, Yau Mei Tai
temple-street-night-market.hk

6.30pm
Shopping is hungry work. Though it’s typically served in the morning, you won’t be pressed to unearth restaurants offering dim sum all day long, making it the perfect pre-dinner snack. Joyful Point Dim Sum Specialist, just a street over, is a prime location for fist-sized buns hiding a bounty of sticky barbecued pork and steamed shrimp encased in delicate dumpling wrappers. The true prize, though, is the Egg Custard Durian Panda Bun. Behind its cute, pillowy panda face is a hot, sweet, gooey centre that flips the stinky fruit’s rep on its head. For something equally delicious, but a tad more pedestrian, make for Lee Keung Kee North Point Egg Waffles and sink your teeth into one of Hong Kong’s most celebrated desserts. Firm and crunchy on the outside, soft and doughy on the inside, these egg waffles satisfy any sweet tooth.
Joyful Point Dim Sum Specialist
G/F, 121 Parkes Street, Jordan
Lee Keung Kee North Point Egg Waffles
178 Nathan Road, Tsim Sha Tsui

7pm
Now you’re ready to take to the skies at the highest rooftop bar in the world, Ozone. The crowning jewel of the swanky Ritz-Carlton, it’s not an off-the-beaten-path type of bar, but its views should not be missed. Feel your ears pop as you speed in the lift to the 118th floor at 490 metres above sea level, then wander across honeycomb-cracked floors awash in neon-blue lights to the terrace to snag a spot by the floor-to-ceiling windows. If the city’s tenacious smog has cleared, you’ll be rewarded with panoramic views of its twinkling skyline.
Ozone Bar
1 Austin Road West, West Kowloon
ritzcarlton.com

8pm
If you thought Victoria Harbour was special from up high, wait until Symphony of Lights, Hong Kong’s nightly light and sound show, transforms the city into an ever-changing canvas. Watch as, for 13 minutes, more than 40 buildings along the waterfront illuminate the evening in a mosaic of colour. Settle in among the throngs in Tsim Sha Tsui or, better yet, take to the bay by junk boat and get swept along with the lilting music.
Tsim Sha Tsui, Kowloon

8.30pm
In a country so famous for food, restaurants need to pack a punch to stand out. Say goodbye to Kowloon, head to the MTR and jump on a train to Wan Chai on Hong Kong Island for dinner at an enduring favourite. Wing Wah Noodle Shop has been operating for more than 60 years, and although this Michelin-starred establishment may not be much to look at, it does cook up some of the best wonton noodles in the territory. Made from scratch using bamboo to knead the dough, the noodles’ rich aroma will hit you from the moment you enter the shop. Chow down on shrimp wonton noodles or a suckling pig variety. The serves are small, but service is fast and the flavours are enormous.
Wing Wah Noodle Shop
89 Hennessey Road, Wan Chai

9.30pm
A 1930s Parisian saloon meets street art meets French cuisine at Bibo. Step off the street and into its kaleidoscopic, thought-provoking interior where creatives from all over the globe – even the elusive Banksy – have splashed their art across its walls. The French gastronomy is incredible, but the cocktails are a work of art and each drink is designed with layers revealing different flavours that evolve with every sip. Try Ma Cherie, a concoction of Don Q Anejo rum, Tia Maria, Figoun (coffee and fig liqueur) and Punt e Mes (Italian vermouth), with a dollop of blackcurrant sorbet infused with Sichuan peppercorns at its core and garnished with a golden squiggle of hard, crunchy caramel. Every sip enhances the art around you, making imbibing libations here an almost psychedelic affair.
Bibo
G/F, 163 Hollywood Road, Sheung Wan
bibo.hk

10pm
There’s more to this umbrella store than meets the eye. Wander its glowing corridor lined with silver-handled brollies, twitch the correct one by the reception desk and watch a panel slip aside to reveal Foxglove, a swish underground speakeasy. Taking inspiration from first-class air travel and vintage cars, the 1950s interior oozes bygone luxury with its sculpted cream ceiling, main lounge and bar fitted with navy-blue chintz booths and white tables illuminated by candlelight. Even the loos, modelled on ship cabin washrooms, are an adventure. On the drinks list, pass the cocktails and rare single malts so old they redefine ‘liquid gold’, and flick to the bar’s romantic ‘backstory’ – the fantasy world of a globe-trotting English gentleman and his ladylove. For those looking to take speakeasy to the next level there’s not one but two concealed VIP suites to be discovered – a red-velvet room reminiscent of a luxury train cabin and a library with wraparound shelves covering the walls and ceiling, all you have to do is find the key and sneak inside.
Foxglove
2/F, 6 Duddell Street, Central
foxglovehk.com

11pm
There’s no better way to immerse yourself in one of the world’s busiest financial hubs than at Hong Kong’s only stock market bar. Welcome to Wolf Market, where the price of your bevvy goes up or down according to what people are (or aren’t) drinking. Sink into a black leather chair on the Trading Floor, turn your eyes to the glowing LED screen flashing with prices above you and let the games begin. Feel the rush of anticipation as the competition intensifies. Watch your favoured libations like a hawk and, if you’re lucky, a market crash might just see you reaping the rewards with an inexpensive beverage. Once you’ve collected your bounty, climb the concealed staircase beside the bar to the top floor Trader’s Room and celebrate your savings with another signature cocktail. Making bank has never been so delicious.
Wolf Market
21 D’Anguilar St, Central
wolfmarket.com.hk

12am
The midnight hour promises magic and the Iron Fairies is an otherworld made manifest. Modelled on an ironsmith’s workshop, this establishment is a feast for the eyes. Round iron tables adorned with fairy figurines dot the snug interior, candelabras emit a soft glow, and furnace and casting rooms offer space for more intimate gatherings. But it’s the 10,000 preserved butterflies that hang from the ceiling, suspended in perpetual flight, that will set your heart aflutter. At the bar, metal-crafting tools and tiny vials of ‘fairy dust’ dangle above mixologists crafting potions. Sink into a chair beneath the fluttering kaleidoscope, get your lips around Smoke in a Bottle – a heady brew of blueberry vodka, elderflower liqueur, homemade sage cordial, fresh lemon juice and crème de cassis with smoked cacao nibs – and let the live jazz  and blues wash over you.
The Iron Fairies
LG/F, 1–13 Hollywood Road, Central
diningconcepts.com

2am
By this time, the Lan Kwai Fong district is heaving as party-goers spill out into the streets, dancing under the fluorescent lights to a mishmash of music before squeezing into taxis. Soon the night will simmer down, but not at Volar. The party at this underground club is just kicking into gear and, as one of Hong Kong’s longest-living dance clubs – it’s been reinventing itself since 2004 – it’s the perfect place to finish off the night with a bang. Slink down the stairs and into one of its two rooms: get your grind on to hip-hop and RnB between mirror-clad walls, then swagger to house and EDM beats in a blacked-out room streaked with neon LEDs. This is the place to see and be seen – some of the world’s best DJs and artists, socialites and athletes have graced these rooms – so dress to impress.
Volar
44 D’Aguilar Street, Central
volar.com.hk

Qantas flies direct to Hong Kong from Sydney and Melbourne. Return fares from Melbourne start from US$772.
qantas.com

There are some spectacular hotels in Hong Kong, but if you’re after a more immersive experience and a price tag that’s easier on the purse strings, snap up an apartment in Kowloon with Airbnb.
airbnb.com.au

For more ideas on what to see and do in Hong Kong, check out the tourism website.
discoverhongkong.com 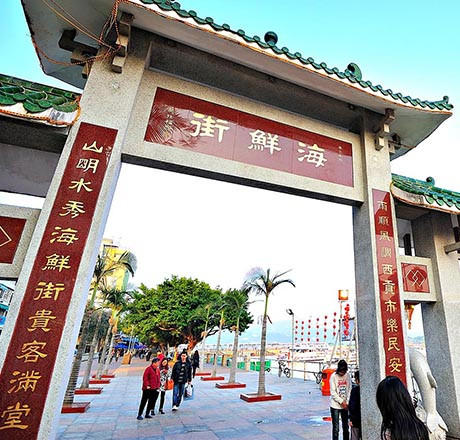 Hong Kong has plenty of natural beauty to explore and an...

Hong Kong has plenty of natural beauty to explore and an ideal starting place to get... 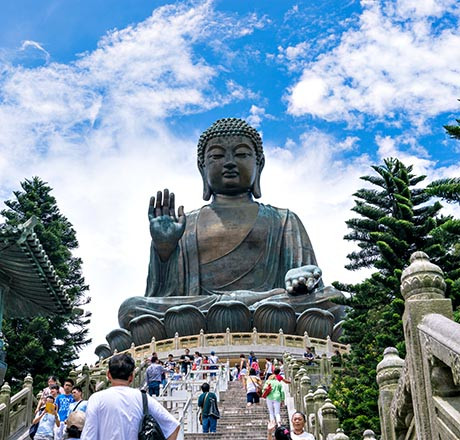 Lantau Island is one of those places that nobody goes home...

Lantau Island is one of those places that nobody goes home disappointed, because it caters... If you're itching to escape the hoards, only a short boat ride...

If you're itching to escape the hoards, only a short boat ride will land you smack bang in... 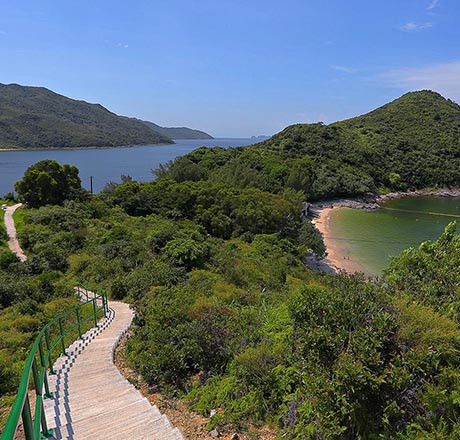 Not far from Sai Kung, Sharp Island is another one of Hong...

Not far from Sai Kung, Sharp Island is another one of Hong Kong's hidden treasures. Known... 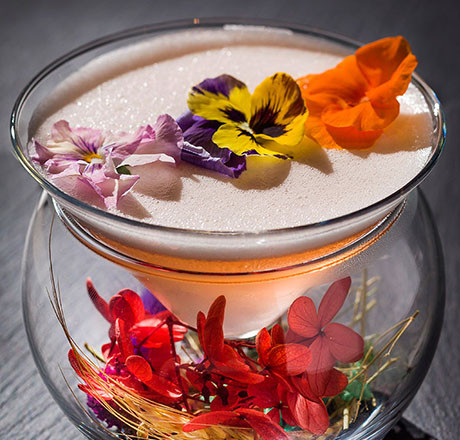 You won’t find stereotypical tropical shirts and straw-roofed hats at the tiki-themed... drink
A touch of...
A touch of Spain in Hong Kong
SOHO, HONG KONG

Check out the Wise King, a Hong Kong cocktail bar inspired by...

Check out the Wise King, a Hong Kong cocktail bar inspired by a Spanish fable. Legend has... It’s time for tea at Hong Kong’s coolest new cocktail bar, except the type of... Hong Kong has plenty of natural beauty to explore and an ideal starting...

Hong Kong has plenty of natural beauty to explore and an ideal starting place to get... 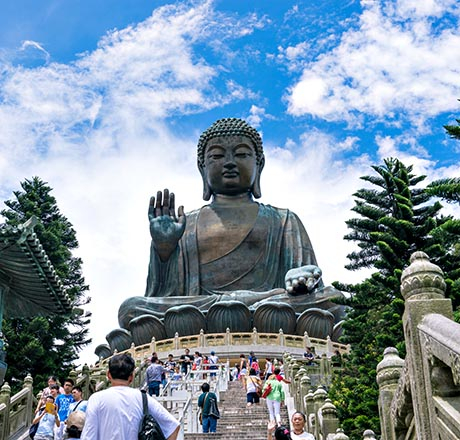 Lantau Island is one of those places that nobody goes home disappointed,...

Lantau Island is one of those places that nobody goes home disappointed, because it caters... If you're itching to escape the hoards, only a short boat ride will land you...

If you're itching to escape the hoards, only a short boat ride will land you smack bang in...