Regardless of whether you go fly fishing on a lake or kayaking on a river, the Tasmanian wilderness is sure to bring out the adventurer in anyone.

After more than an hour of monotonous, tangled and frustrating failure, my fly finally soars into the air above me and, just as it begins its delicate descent, a secondary subtle flick of the wrist makes it dance through the sky horizontally before dropping into the icy water just 20 metres away.

I glance over at legendary Tasmanian fly-fisherman Peter Hayes for approval. He looks back at me with a nod and a grin – the sort of acceptance you could expect if you’d just joined a secret Masonic society.

I am standing on the edge of Hayes’ boat, which rocks gently against the tannin-tinged waters of a Lake St Clair tributary in Tasmania’s high country, two-and-a-half hours from Hobart and just west of Derwent Bridge.

We’re midway through my first fly-fishing lesson, and the world champion and I happily share a few sips of whiskey from an old leather-wrapped hip flask Peter rummages to find at the bottom of a tackle box.

“cis a real hunting activity,” he says to me. “And I still think there is a certain percentage of the population who are hunter-gatherer types. It’s not okay to go out with a gun any more and just kill stuff. But there are people who want to mountain bike and ski, and there are also people who want to fish.” 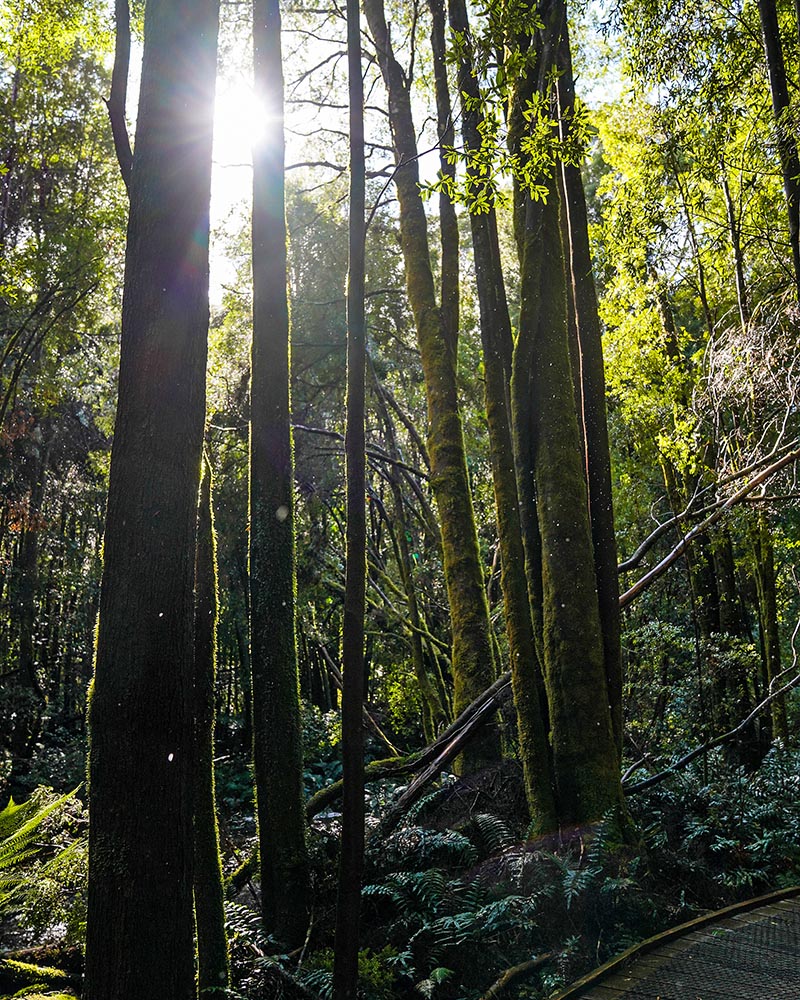 The water on Lake St Clair is so clear I can see the shimmering backs of very cunning trout dance around the boat and toward underwater logs. They pick off ripples on the surface, but avoid my line as if knowingly delaying their fate.

With my impatience growing, Hayes unlocks a box of his handmade flies and runs each of them through his thumb and forefinger while looking menacingly towards the horizon. He has the eyes and furrowed brow of a hunter who knows something I don’t.

As soon as he refashions his line and turns the boat upwind, he waves his rod in the air and is almost instantly hauling in his first fish.

Personally I don’t catch a thing, but it doesn’t matter. Hayes’ dedication to his craft is infectious and, in his company, I feel a strange urge to hold a Bowie knife or start a fire once we finally return to shore. Perhaps it is a combination of the cold air and the whiskey, or maybe I’m simply realising I’m more hunter-gatherer than I thought.

Herbert Hoover, America’s thirty-first President and avid angler, once said, “To go fishing is the chance to wash one’s soul with pure air.” Maybe that’s what’s happening to me on my first fly-fishing adventure. After all, the air of Tasmania’s wilderness is about as pure as it comes.

And in this wedge of lakes and buttongrass moorland sandwiched between two of Australia’s most picturesque national parks – Cradle Mountain-Lake St Clair and Franklin-Gordon Wild Rivers – there’s an abundance of soul-scrubbing experiences. 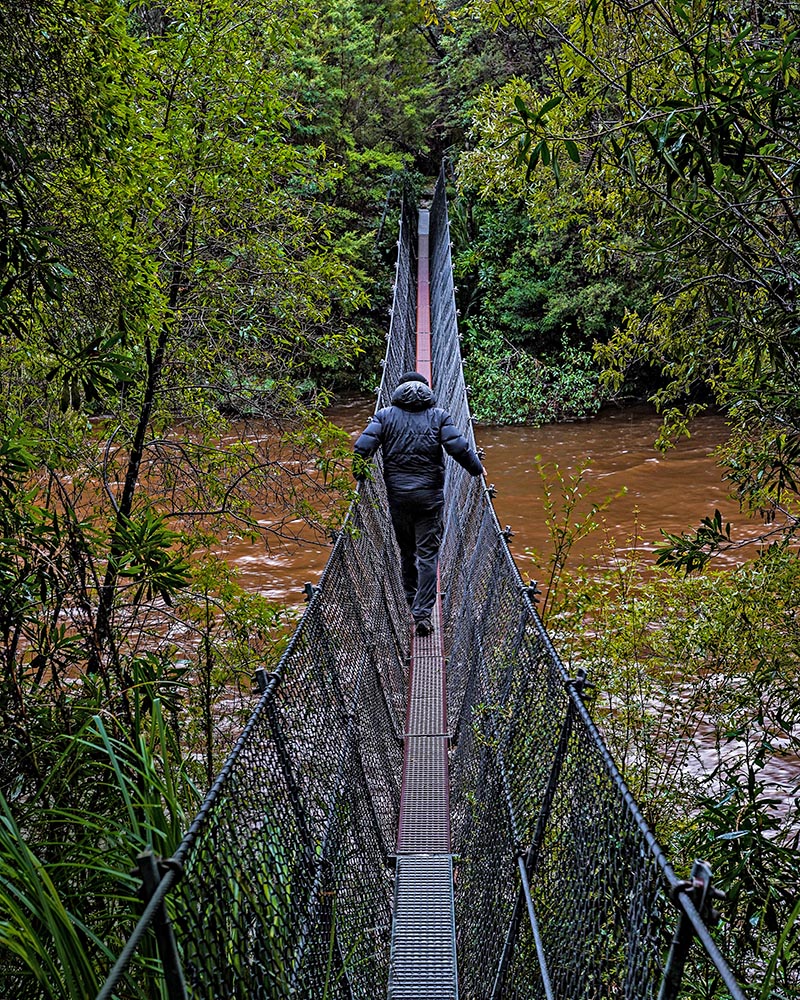 A swing bridge over the Franklin River. Click to view gallery

If you do opt to visit Tasmania’s wild west during winter, there’s no need to lower your expectations in the same way you might need to if heading to the beach. As you emerge from Hobart’s tangle of outer suburbs by car – really the only way to get out here – you enter a part of Australia that isn’t dissimilar to the Scottish Highlands or the dense rolling forests on the outskirts of Vancouver. The Apple Isle has the capacity to capture the imagination of the reformed traveller looking for private log fires, empty roads, wineries you’ve never heard of and wide, open spaces.

This part of Tasmania in the wintertime is akin to a post-pandemic therapy session. If ever there was a place where you never again need to worry about taking a wide berth around people in public or covering your face in the supermarket, this is it. In fact, the new-found hunter-gatherer in me says I must urgently pack up my life on mainland Australia, build a tin shed and move to this naturally isolated landscape, just in case.

Thankfully, perennial Tasmanian tourism entrepreneur Simon Currant has already done most of the requisite doomsday prepping for us. Rather than a tin shed, in 2015 he transformed a diminutive hydro-electric station on Lake St Clair into an award-winning, 19-room boutique hotel called Pumphouse Point.

Today the Pumphouse and its surrounding buildings, including the exclusive Retreat cabin, pay homage to the wilderness and its deep local roots. The honesty bars (probably my new favourite thing in the world) are well stocked with local beer, cider, wine and spirits. Days outside often end with a neat whiskey by the open fires, which roar to life in front of an almost endless horizon of choppy Lake St Clair.

Guests are also provided with a canvas backpack to stock from their room’s larder, but be sure to get your sourdough order in the night before. It will be handed to you, still warm and wrapped in a paper bag, as you make your way out for a day of exploring the nearby hiking trails.

It was not long ago Australia nearly lost a great swathe of this pristine wilderness in southwestern Tasmania. Instead, a High Court decision blocked the damming of a once little-known river that had become one of our greatest environmental political wedges.

Until my recent visit I couldn’t fully appreciate what made the Franklin River so significant. For those of us not old enough to understand what would’ve been lost, I suggest taking a drive up the Lyell Highway, followed by a brief stop at a rickety swing bridge that dangles over a roaring torrent of water. It’s at this point the Franklin appears to let out an exhaustive gasp, a reminder of the land- and life-altering power this river exudes upstream.

A little further up the windy road closer to Strahan, you’ll also find the Instagram-worthy Nelson Falls. During my visit, the falls are so powerful the usual viewing platform had almost disappeared.

If you are seeking something a little more primordial than Pumphouse Point, take the three-hour drive to the frontier town of Corinna. Here, Corinna Wilderness Experience, deeply ensconced in the mystical Tarkine rainforest, has a number of basic accommodation options, including the old Roadman’s Cottage, which is perfect for couples.

No trip here is complete without an obligatory paddle down the Pieman River. Adventure seekers can hire kayaks in the misty mornings and run their hands through the icy waters while floating by the wreck of the SS Croydon, which sunk here in 1919.

Food and wine personify Tasmania. Speaking to locals, it’s almost as if you can chuck something in the ground and watch it spring roots within seconds. Everyone is a farmer of some sort.

There is a connection to food and its provenance in every restaurant you visit. No more so than at the Agrarian Kitchen Eatery in New Norfolk. Owners Rodney Dunn and Severine Demanet originally opened a cooking school and started a farm here in 2008, but the eatery now takes pride of place in a converted asylum. Smoke wafts from an open log stove in the kitchen that guests can visit to watch their meal being cooked. Stop here on your way back to Hobart Airport.

A little further down the road is Stefano Lubiana, where grapes have been grown the old-fashioned way for five generations and some of the state’s best pinot noir and chardonnay is produced. Since 2010, the vignerons here have used biodynamic principles. For the uninitiated, this involves burying manure-filled cow horns at certain points on the lunar calendar. It’s an unconventional technique that seems perfectly suited to my new hunter-gatherer persona. Now pass me a glass of pinot and my Bowie knife.

You can fly direct to Hobart from most cities in Australia. Once there, you’ll need to hire a car – all the major players have a desk in the arrivals hall. Pumphouse Point is a two-and-a-half-hour drive away.

Spend time on the water learning to fly fish with Peter Hayes. He’ll take you out for the whole day and show you the basics or sharpen your skills for AU$250, including lunch. Hire a kayak for paddling on the Pieman River for AU$70 a day.