Sanej guides me through a packed medieval square and down a steep, deserted alley. The excitement of the crowd fades behind a row of temples and with each step away my paranoia grows: am I about to miss the action? “Do not worry, Mr Cameron,” Sanej says, trying to appear confident. “The best place I know it very well.” It’s day four of Bisket Jatra, a raucous nine-day festival for Nepali New Year celebrated with unmatched intensity in the UNESCO World Heritage city of Bhaktapur.

According to the Newar ethnic group who predominate here, the Sky is about to make love to the Earth in a ceremony that honours the special Tantric power of a fabled prince. I begin to think Sanej’s promise of the best view in town is an equally unlikely fable until he leads me through a nondescript doorway to a rickety staircase. Each floor we ascend lets in more noise from the streets, and on the fifth we can barely hear ourselves say “Namaste” to a huddle of bewildered, giggling grandmothers. Above them we hoist ourselves through a hatch and climb onto the roof just in time.

I barely have a moment to take in the panorama of hordes of people erecting a 50-metre wooden ‘pole of love’ called a Yoshin before a human surge flows downhill from the centre of the old town. Sanej’s local knowledge has seriously paid off. We’re in the box seat as a fierce tug of war ensues via a tangle of hundred-metre-long ropes between rival sections of the crowd. It’s called the Grounding of the Yoshin and the movement of the pole in a large stone mortar none too subtly symbolises a divine bump and grind as the sun casts its last rays. Such is the power of each thrust that scores of men on the losing side are left dangling from ropes metres above the brick pavers.

The Grounding of the Yoshin also marks the new Bikram era and, bizarrely, celebrates the not-quite-Disney legend of a young man who became a prince by satisfying the voracious sexual appetite of the king’s daughter and survived to tell the tale. “You see,” comments Sanej, as though it were an element of logic, “the two banners on the Yoshin are the serpents that sneezed nightly from the princess’s nostrils and murdered her many lovers right in the hot bed, until a special youth with Tantric power sliced them.” The symbolism of slain serpents starts to make more sense when the pole snaps from the strain, thundering to the ground amid biblical shrieks – and later, when I learn that the event also symbolises marriage.

As soon as the Yoshin lays wasted, the crowd’s energy surges anew, redirected at hauling an ornately carved, multi-tonne chariot through Bhaktapur’s darkening streets. The chariot features another prominent phallus, mounted with a sacred metallic icon of Bhairab, a wrathful incarnation of Shiva and a patron deity for the city, alongside a hobgoblin, just for good measure. The object for the hundreds of young men – in various states of inebriation – rhythmically heaving the ropes is to clash the creaking, swaying chariot with Bhadrakali, Bhairab’s female consort, for another divine dalliance.

The sexual symbology of events continues long (and hard) into New Year’s evening, and reflects key parts of Bhaktapur’s identity. Known as the Tantric City and designed in the shape of a conch shell, its Malla kings ruled an independent kingdom from the fifteenth to the eighteenth centuries with a reverence for Tantric traditions that continue today and are immortalised in the city’s World Heritage-listed temples. 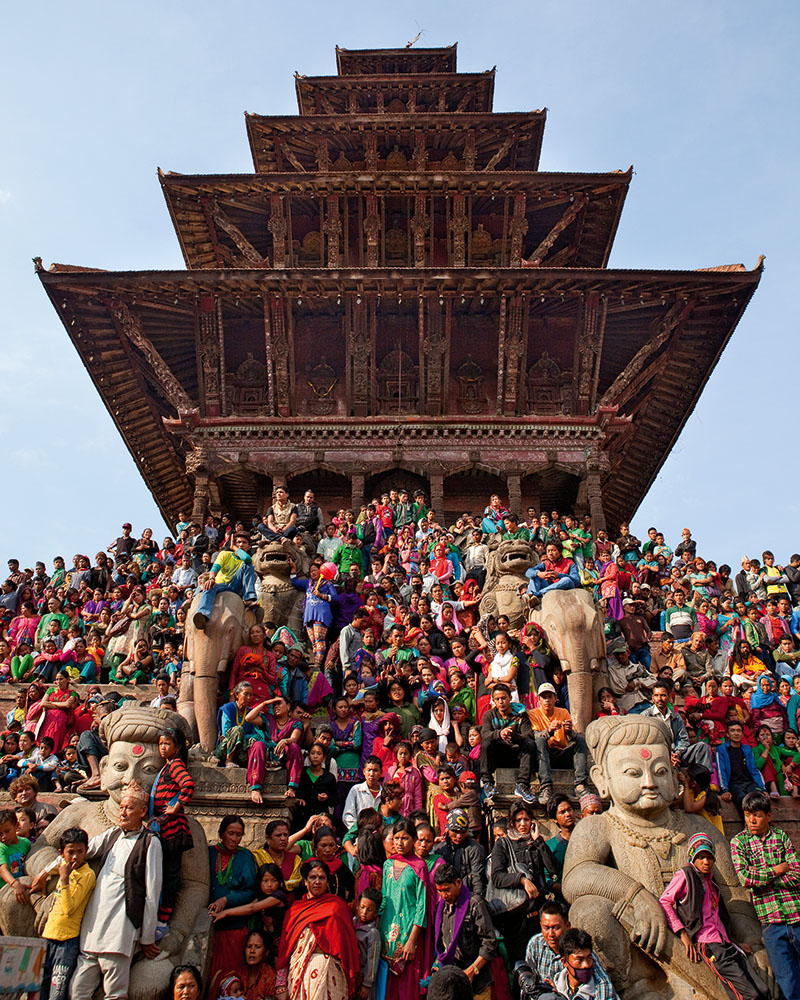 Waiting for the celebrations to begin at Nyatapola Temple. Click to view gallery

Initially, Bhairab is drawn on his chariot through Taumadhi Square past the five-roofed Nyatapola Temple, one of Nepal’s most renowned, where the powerful Tantric goddess Siddhi Laxmi is said to hide.

But higher up in the old city’s Durbar Square lie even more intriguing drawcards. Yaksheswor Mahadev is the oldest surviving temple in the block and features more than 24 sexual positions carved into its roof struts (stand-up doggy appears to have been a royal favourite). Even more curious is the Shiva Parvati Temple that features its own Karma Sutra for amorous elephants.

The next morning, festival fervour continues into another religious precinct in the neighbouring township of Thimi. Although exhausted from the previous evening I’m up before sunrise and cram into a very mini-van with Sanej and a handful of his friends who are all photographers. It’s no coincidence. I’ve booked this trip with Pramod Khatiwada, an enterprising Nepali based in Melbourne who has started a company called Sherpa Tours. As he politely explained to me over pizza and beer in a Melbourne bar, his aim is to create personalised experiences catering to a traveller’s interests – in my case, that’s photography – that also make use of his local knowledge and contacts.

Sanej and his friends have come from Kathmandu to shoot the most colourful event of Bisket Jatra, Sindoor Jatra (also known as the Vermillion Festival), and because they’re displaying their festival images from previous years in an exhibition at a local restaurant.

The morning at Thimi’s Balkumari Temple begins with a bubbling pilgrimage as dawn’s first rays strike locals queuing to leave offerings of eggs, rice, flowers, coins and scarlet powder. The rooftops and balconies overlooking the adjoining square begin to pack with women and children, and I retreat with Sanej to a small terrace that again puts us in prime position for the action. Part of the devotees’ religious duty today is simply to experience joy. It’s an infectious idea. Within minutes the crowd hits fever pitch as a surging, dancing, singing, drumming, cymbal-clashing throng of men converts the atmosphere from religious to ecstatic moshpit. Explosions of vermillion catch the sunlight as thousands of fistfuls of orange powder rain on as many beaming smiles and wiggly dance moves. Wave after wave of palanquin-style khat (chariot) bearers then charge into the square marking Bisket Jatra’s morning climax. It’s a battle of the khats as each team gangs up on Ganesh, who is carried for several clockwise laps of the temple before making a close-run escape.

After the crowd dies down, one of the photographers bumps into an orange-coated, barely recognisable friend he hasn’t seen in years, and we’re all invited home for an impromptu lunch. There I’m plied with fermented rice beer called chhaang and served a spicy array of goat meat, potato and unrecognisable green vegetables. The guys equally laugh and encourage as I attempt to ball the curry into handfuls with smashed rice, and I’m struck that a standard city guide could never have offered an experience like this.

Thankfully, over the next few days Bisket Jatra is marked more by calm than chaos. It’s a reflection that, towards the end of the festival, the event reins are given over more to women and the elderly. 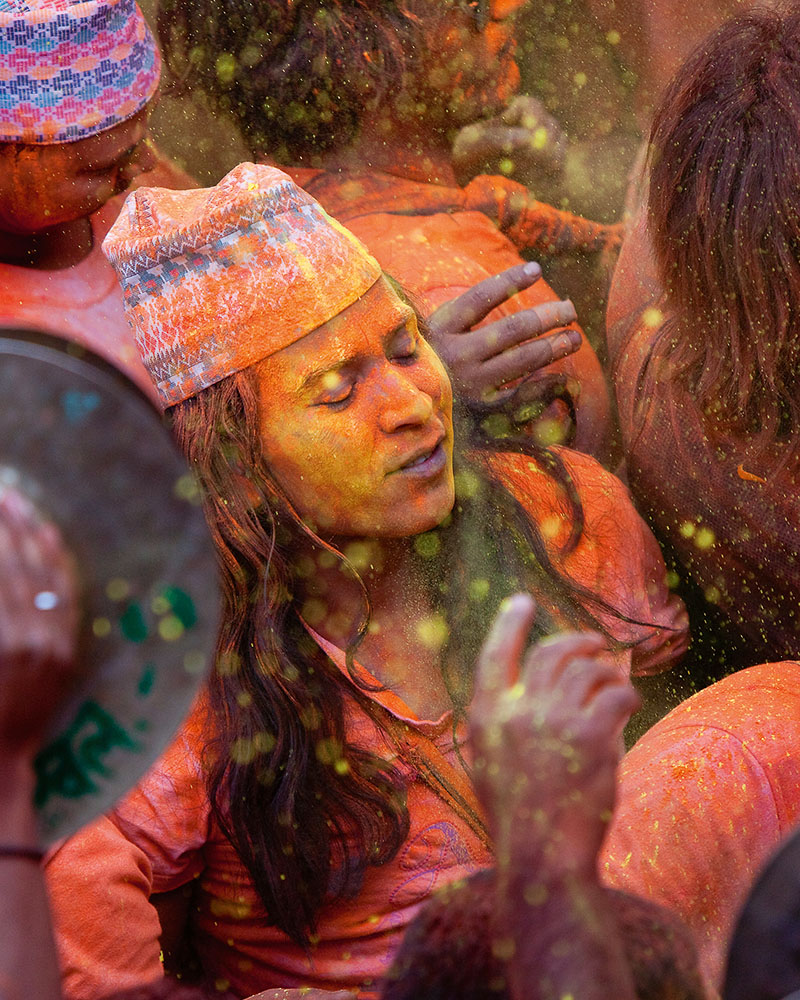 Ecstasy with a heavy coating of orange powder. Click to view gallery

At nightfall the next evening in Dattatreya Square – yet another of Bhaktapur’s temple-laden gathering spaces – a charming procession of elderly men in Dhaka topi (traditional hats) keeps the narrow streets aglow with music and candlelight. It’s called Brahmayani Jatra and is an oil-flame torch-bearing event of gentle atmosphere. Though its purpose is holy, the singing in the torchlight – read from yellowed tomes of Sanskrit – feels like a wind-down from the craziness of the days past. But the event that makes Sanej and the photogs suspend their collective breath is Taa Din, for which the city’s idols come out from their temples for worship. From daybreak the Newari women of Bhaktapur take a prominent lead, filling the streets in elegant, flowing saris and traditional shirts called cholos. Their cloth is dyed in continuous patterns of scarlet and black, and they wear matching adornments of flowers and greenstones in their hair and around their necks. Their traditional role is to make puja (a Hindu prayer ritual) to the gods, but many also prove their musical talent as flautists in roving street ensembles.

It’s only as I’m departing Bhaktapur that I hear an avalanche on Mount Everest has claimed the lives of 16 mountain guides, mostly Sherpas. It’s the deadliest in Everest’s history and a tragedy made more acute by the fact that each man who died was working early to portage gear for foreign climbers, who meanwhile remained in safety at base camp. When I cast my mind over Bisket Jatra, I can’t recall seeing more than 10 or 15 foreign tourists among the tens of thousands celebrating. It’s an infinitesimal fraction of the numbers who fly in to trek among and climb the world’s highest mountains, and a perplexing fact to consider after experiencing such a captivating, world-class event. Clearly the world is yet to discover the cultural heights that rise here.

Bisket Jatra is celebrated in Bhaktapur every year in mid-April, although exact dates vary. The annual Bisket Jatra Photography Exhibition is held concurrently in the ground floor gallery of KhwapaChhen Restaurant and Guest House in Bhaktapur.
khwapachhen.com 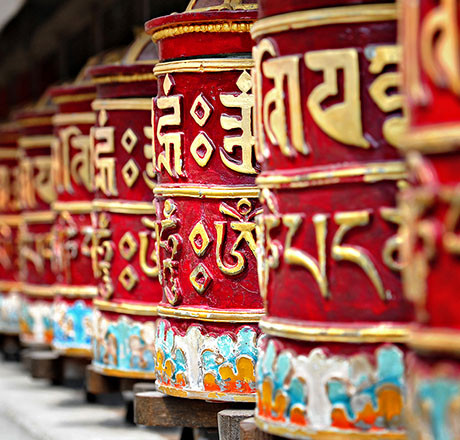 Hidden away in the shadow of the Himalayas, Nepal and Bhutan...

Hidden away in the shadow of the Himalayas, Nepal and Bhutan have long been considered... 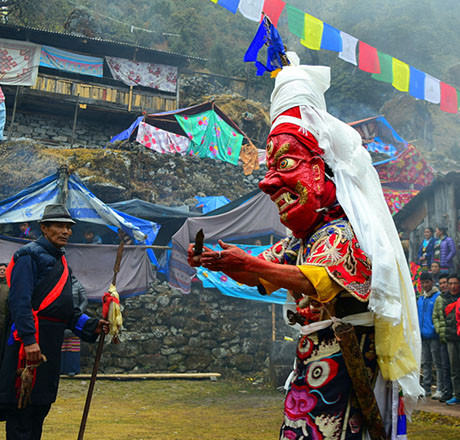 In peak season the famous Annapurna or Everest base trekking...

In peak season the famous Annapurna or Everest base trekking routes can feel not... 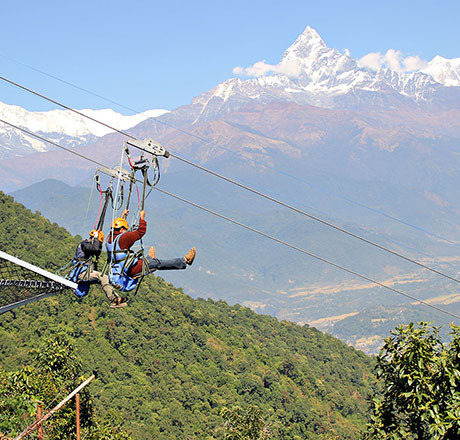 If you’re after a high-altitude experience without the...

If you’re after a high-altitude experience without the knee-crunching descent of a... 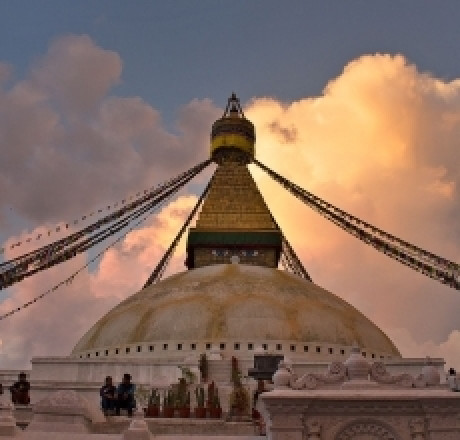 do
A Holy...
A Holy Pilgrimage: Boudhanath Stupa
KATHMANDU, NEPAL

In a city filled with the incessant tooting of taxis and...

In a city filled with the incessant tooting of taxis and rickshaws, and stall owners... 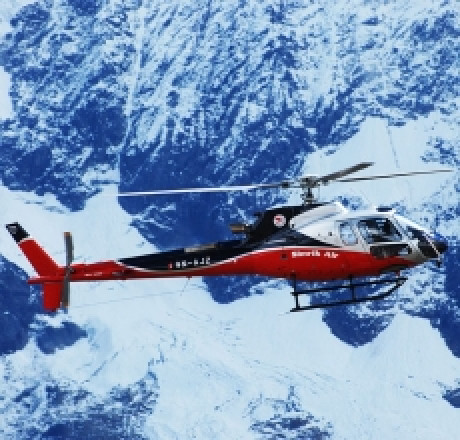 do
Chopper to...
Chopper to Base Camp
EVEREST, NEPAL

Everest Base camp – it’s on every traveller’s bucket...

Everest Base camp – it’s on every traveller’s bucket list, but why put your lazy... 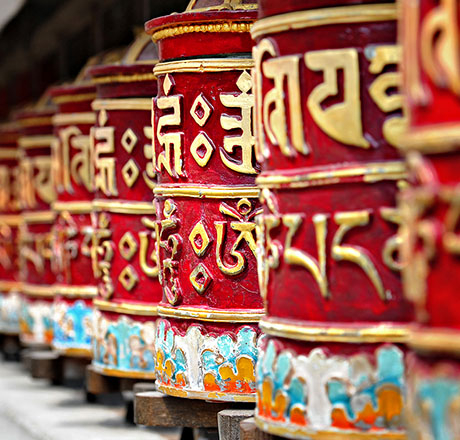 Hidden away in the shadow of the Himalayas, Nepal and Bhutan have long been...

Hidden away in the shadow of the Himalayas, Nepal and Bhutan have long been considered... 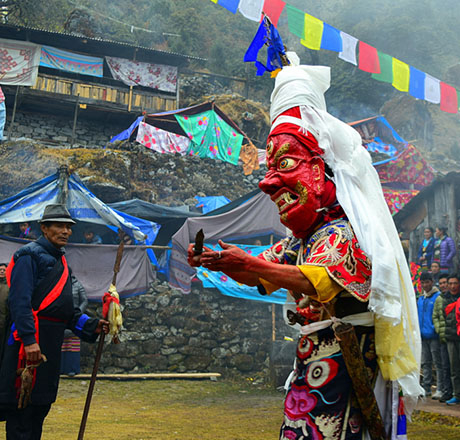 In peak season the famous Annapurna or Everest base trekking routes can feel...

In peak season the famous Annapurna or Everest base trekking routes can feel not... 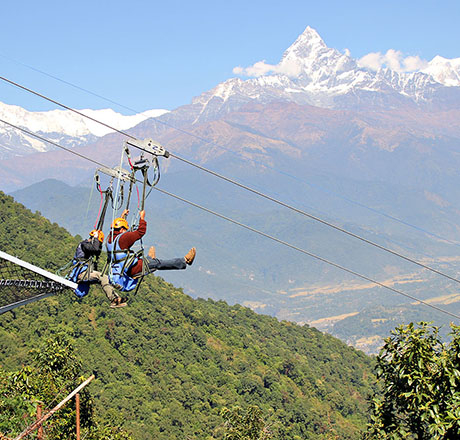 If you’re after a high-altitude experience without the knee-crunching...

If you’re after a high-altitude experience without the knee-crunching descent of a...

do
A Holy...
A Holy Pilgrimage: Boudhanath Stupa
KATHMANDU, NEPAL

In a city filled with the incessant tooting of taxis and rickshaws, and stall...

In a city filled with the incessant tooting of taxis and rickshaws, and stall owners...