Hobart’s ominous ceiling of cloud spits us out on the tarmac and we’re soon absorbed into a landscape as dramatic as it is gloomy. Rolling fields and mountains give way to a sky of endless grey. It’s a landscape of contrasts that serves as the perfect backdrop for the Museum of New and Old Art (MONA), an institution dedicated to life’s extremes – birth, sex and death. And that’s why we’re here: to revel in MONA’s Dark Mofo festival and get in touch with our hedonistic, pagan sides. Or, put simply, to check out some seriously weird art and music while enjoying Tasmania’s culinary spoils.

The program for the festival is unlike any I’ve ever seen. Museum creator and introverted gambling prodigy David Walsh and his minions do a damn fine job of sourcing some of the most left-of-centre exhibitions and acts. It adds great mystery and intrigue to the whole adventure, as there’s little preconception when walking into one of the numerous venues scattered across Hobart. From giant melting ice-blocks and transvestite Beat poets to Australian exploitation film screenings, Dark Mofo’s line-up is irreverent and unpredictable.

First up, and a mandatory highlight of the Mofo experience, is a visit to MONA itself. Clinging to a small point overlooking the Derwent River at Berriedale, about 20 minutes’ drive north of Hobart, the monolithic museum looks more like a Bond villain’s lair than an art gallery. Rumour has it the building will eventually crumble into the river as the land below it erodes. I guess we’ll just have to wait and see. 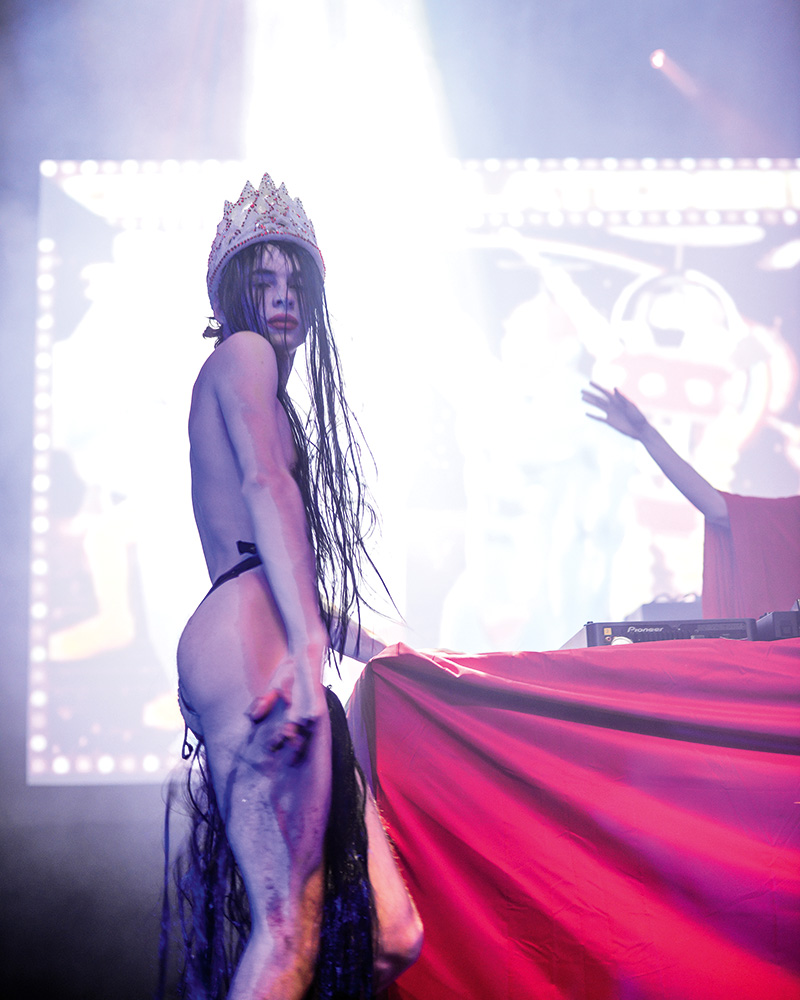 DJ Jnett and her queen kick the afterparty up a gear. Click to view gallery

You can’t describe MONA in a nutshell. Safe to say, there’s nothing like it on Earth. Or in the earth, for that matter. The museum is built into the ground and you can either take a lift or a steep winding staircase into its bowels – I use that word for good reason. One of the museum’s more notorious exhibitions is a contraption designed to replicate the human digestive process. It’s all very scientific, of course, but a poo machine nonetheless. And, yes, it stinks.

Our schedule allows only a couple of hours in the museum, but you could easily spend longer. It’s incredible, weird, shocking, ridiculous and even has an onsite craft brewery and winery. I can highly recommend both, especially after watching a robot take a crap.

The rest of our Dark Mofo jaunt is split between day and night. The days are spent traipsing around Hobart and surrounds, taking in the festival’s bizarre and disparate offerings. These range from a screening of the classic Ozploitation flick Wake in Fright and a disturbing performance from legendary gothic Greek singer Diamanda Galás, to a musical stage adaptation of Snowtown, the film about the infamous ‘bodies in barrels’ murders. It is hands down the strangest theatrical experience of my life, and I’d wager a barrel  of hard cash it’d be one of yours too.

Murderous musicals and wailing Greeks aside, Mofo really gets going after the sun goes down. The biting cold winds pick up and now is the time to ignite your smouldering inner fire with some tasty food and drink. The Winter Feast, a huge wharf on Hobart’s waterfront filled with food stalls by some of the country’s leading chefs, is an ideal start. But get there early as the event unexpectedly drew more than 45,000 hungry punters over the course of the festival in 2014.

Bellies full, we take refuge inside the New Sydney Hotel, a pub to end all pubs. This Hobart institution is a must-visit. The giant blazing fireplace toasts our backs as we peruse the drinks list. But it’s the hand-pumped beer tap that snags our attention. The brew on offer is rotated regularly, offering up a bevy of either unheard of or unpronounceable small-batch beers such as the Aurora Borealis, a 16 per cent beast that dares you to mumble its name after a couple of pints. We knock back a few and proceed to Dark Faux Mo, the festival’s official afterparty.

We roll into the Odeon Theatre, a longstanding Hobart icon and this year’s party venue. Divided between the main theatre, a mezzanine space and a small shed around the back, the festivities offer something for every taste. Headlining the main stage on the final night of the festival is Seattle drone metal band Sunn O))). The entire theatre is drenched in smoke and strobe lights and through the flashing sickly sweet fog comes the most diabolical noise. The smoke begins to clear, revealing a monstrous stack of speakers and the origin of this deafening auditory barrage. I manage about 15 minutes before retreating to the bar.

A few more Moo Brews and I’m upstairs, soaked in sweat and beer, dancing (some would argue having a fit) to Aussie synth-funk outfit Total Giovanni. The band finishes on a high and I slip out into the chill. The pathway between the main theatre and the back shed is crammed. I shoulder my way through the crowd of freaks and geeks and into the brothel-red lit back room. I arm myself with another Moo and take stock. The room is absolutely pumping. In the back corner a bluegrass band works revellers into a frenzy, while in the centre a skinny, bearded dancer a leather S&M get-up is gyrating on a stripper’s pole. At this point any lingering inhibitions evaporate.

I’m not sure what time we finish up, but on the walk home, in between bites of a pie, I try to piece together what this whole thing has been about. I’m still unsure whether the winter solstice/pagan-ritual theme ties each moment and experience together, but there’s something undeniably powerful happening in Tasmania thanks to MONA. Travelling to an island at the end of the Earth in winter and completely immersing yourself in art, performance, gastronomy and partying is truly unique. In a bloated festival landscape such as Australia’s, MONA’s Dark Mofo stands tall among the crowd. And I can tell you, I’ll be back.

The Henry Jones Art Hotel on the Hobart waterfront is a converted nineteenth-century warehouse and comprises 56 individually styled rooms and suites. The hotel combines contemporary styling with heritage architecture and a changing exhibition of more than 400 artworks. Rooms from US$230 a night, including breakfast.
thehenryjones.com

For more information about the next Dark Mofo check out their website. If you’re considering visiting Tasmania there’s plenty of great ideas on the official tourism website.
darkmofo.net.au
discovertasmania.com.au