Mark Eveleigh discovers Ko Chang: an island that somehow manages to keep itself a secret.

Mai mee pun hah!” The chirpy phrase, meaning ‘no problem’, is the most commonly heard sound on Ko Chang.

I wake early for a run before the tropical heat kicks in. The sun is throwing its first saffron-coloured rays over the humpbacked forest slopes of Ko Chang and I’ve heard the phrase twice already. The first time was from my landlady when I stumbled out of my beach shack bleary-eyed and knocked my barbecue over. Now I hear it again from my new friend, Adi. 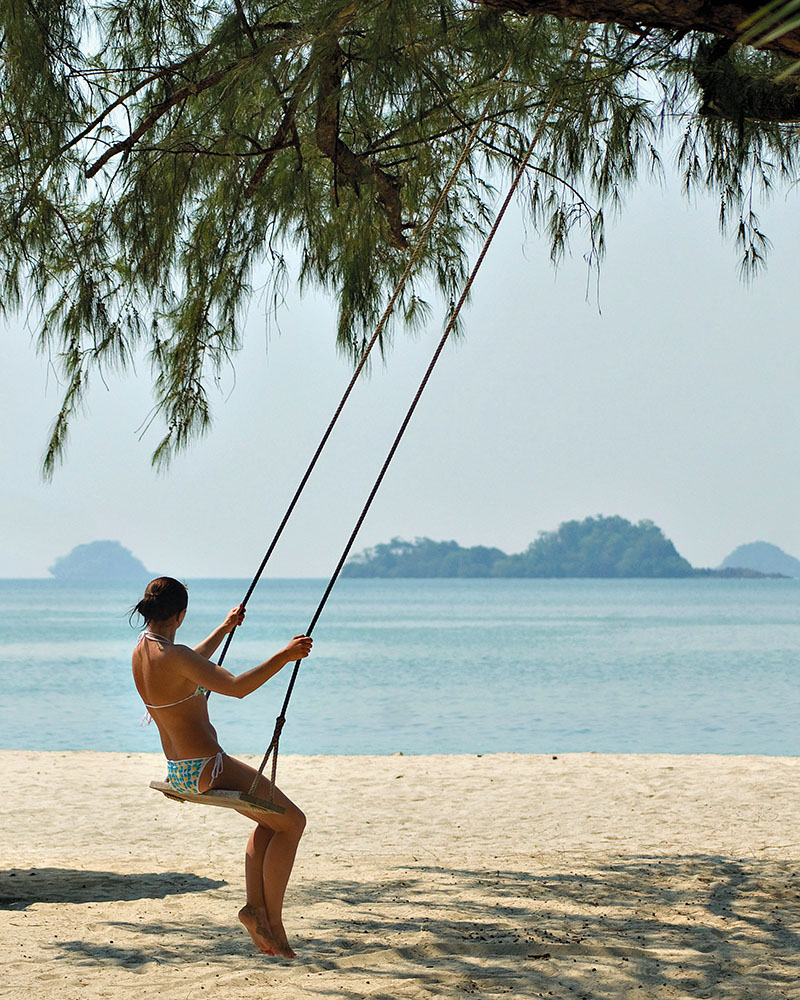 Thailand’s laid-back island attitude has almost become a travellers’ cliché, but for good reason. Life in fast-lane Bangkok has a way of taking its toll and I have come to Ko Chang for a month or two to let the warm waters of the Gulf of Thailand wash away the inevitable stress of big-city life.

Adi clearly knows little of those problems. He, with his dog Mah at his side, operates a little pontoon boat across the narrow tidal inlet to the beach at Klong Prao. His workplace is prime beachfront real estate – the type that postcard publishers drool over. It is almost too perfect, with its turquoise waters and a white arc of sand that is dotted here and there with just the right amount of shade from towering palms.

Klong Prao offers more than enough temptation for me to rip off my trainers and wade across the shallow lagoon. Stupidly, I have come out without any baht and with a sheepish shrug to Adi I pull out my empty pockets. 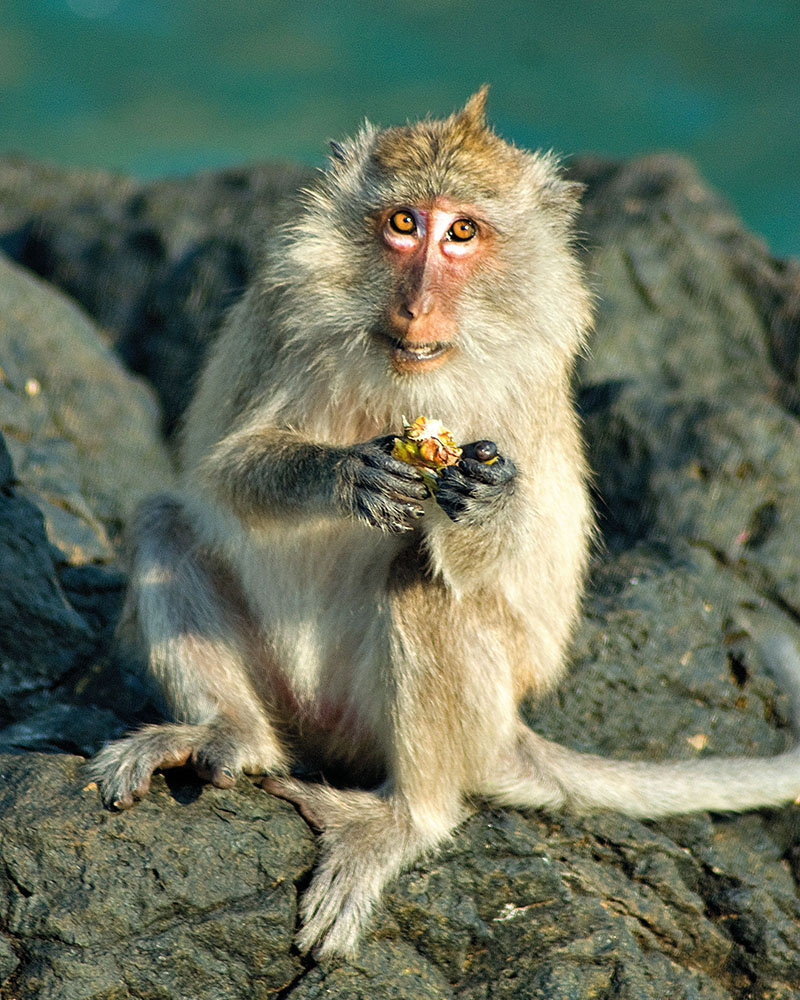 Macaques are a common sight on much of Ko Chang. Click to view gallery

“Mai mee pun hah!” my new friend laughs as he punts over to me. Mah stands on the bow, tail wagging, waiting to greet the first ‘customer’ of the day. During the day, Adi makes his money shuttling tourists to and from the little beach-bar here. At night, he ferries honeymooners on romantic ‘firefly safaris’ deep into the mangroves, where cicadas chirp, frogs croak and there are fairy-light flashes from a million fireflies.

I promise to return that night to take a gentle cruise with a frosted bottle of Chang beer in hand. The thought is enough to put a renewed spring in my step as I start the long run back up the sand towards my bungalow.

Ko Chang (Elephant Island) is so-called because it is said to resemble a sleeping elephant. For much of the last month I have been living happily tucked away in the elephant’s armpit.

Facilities in my simple shack are limited. Ten dollars a night buys me a bamboo bed, a bare light bulb, a barbecue, an electric fan and a cold-water shower. I share the shower with a giant spotted gecko that is known throughout South-East Asia as ‘tokay’ for its loud territorial call. Even in the jungle the call would carry for half a mile, but amplified by the acoustics in my bathroom and the still of the night it is nothing short of terrifying. Someone once told me that it is good luck if the tokay repeats its call exactly seven times, and since then I have been obsessively counting. 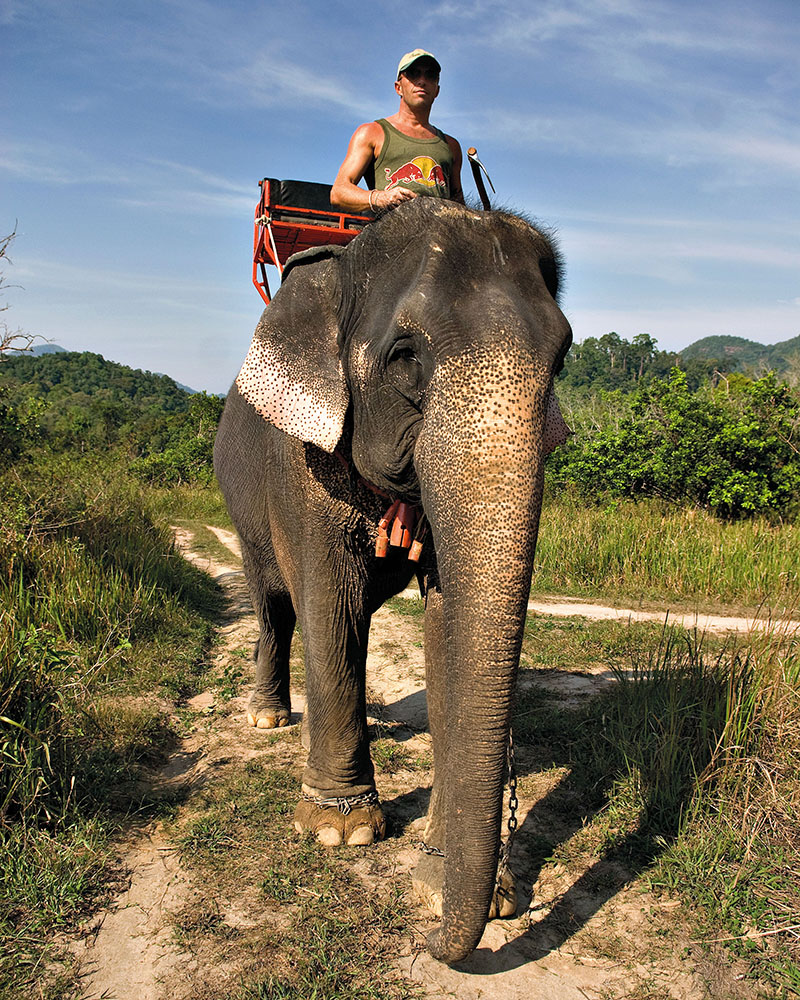 One of the best ways to experience the interior of ‘Elephant Island’. Click to view gallery

However, the saving grace of my humble abode is the small verandah on which I am able to put some distance between my roommate and I, and doze in my hammock just a few feet from the small waves.

Ko Chang, an easy five-hour drive east of Bangkok, has remained a sleepy backwater place, while more isolated islands like Ko Samui and Ko Pha-Ngan have been frantically over-developed. Pioneering backpackers in search of ‘secret spots’ rushed to the outlying islands in the Gulf of Thailand and the Andaman Sea. Yet, thankfully, Ko Chang, one of Thailand’s biggest islands, was almost completely overlooked – saved by its size and its proximity to the country’s capital.

Just a decade ago, when Phuket (the country’s largest island) was exploding as a world-famous tourist destination, the Chang islanders were yet to receive electricity or telephones.

Things have changed in recent years and there is now a string of tourist resorts down the west coast of the island, and bars are spreading like a neon rash down busier sections of the coast road. Ko Chang even has its own little backpacker-ghetto party scene at the inappropriately named Lonely Beach.

Ko Chang (along with over 40 other islands) is part of the Mu Koh Chang Marine National Park, which means that development is more controlled here than anywhere else.

In the past month, I had travelled much of Ko Chang’s west coast by motorbike, and had explored the east by pickup truck. I found a wilderness of tangled mangrove swamps and deeply rutted sand-tracks. At almost every turn in the roller-coaster road I found beautiful bays with curvy strips of deserted talcum-powder sand.

I had even taken time to explore the outlying islands by boat. Some say that there are roughly 365 islands in the Gulf of Thailand, but nobody knows for sure. Some islands, like Ko Mak, have become tourist havens and dive resorts, but even here most islanders still make their living from fishing, rubber-tapping and harvesting copra oil. In larger fishing villages, jetties and rickety boardwalks jut out over sparkling reefs and rows of fishing boats. The boats are decked with fishbowl-sized light bulbs, used to lure fish. On good fishing nights, when the moon’s glow is dim, the ocean horizon can sparkle as strongly as the stars in the tropical sky.

The centre of the island – the elephant’s back – is still hard to access independently without mounting a full-scale jungle expedition. This area is almost completely covered with jungle that is home to stump-tailed macaques, civets, giant monitor lizards, hornbills and occasional herds of ‘free range’ elephants, enjoying R&R from their tourist-ferrying duties.

I had been on an elephant trek in Thailand before, and once I even joined an elephant-back tiger safari in India.

I hadn’t enjoyed either experience much. I had trouble coming to terms with the concept of chaining and domesticating an animal that most experts admit have a level of intelligence that we are never likely to fully comprehend. But I was on Elephant Island and, although I was still reticent, I finally convinced myself to give elephant trekking its last opportunity to convert me.

My new travelling companion is called Nam Pet. She weighs four tonnes, has rough, dry skin and a head of extremely harsh bristles that’s soon causing quite serious chaffing on my inner thighs. Nam Pet’s huge bulk sways as we shuffle through the rubber plantation and up into the jungle-clad lower slopes. The pace is slow and relaxed, like the rest of Ko Chang. To me it seems that Nam Pet and her colleagues are even enjoying their patrol, as they happily browse along the edge of the trail and nudge each other affectionately.

We trek for a couple of hours and enjoy sightings of macaques and hornbills that are unconcerned of our presence. On the way back down to Chutiman elephant camp a little bird flits happily between the elephants’ feet. It appears to be hunting for insects stirred up by the monstrous pads and it chirps a pretty little staccato call that seems to be repeating one phrase over and over.

AirAsia flies from Melbourne to Bangkok for around A$703 return. Catch a ferry from the terminal at Trat for the half-hour trip to Ko Chang.

Penny’s Bungalow Resort has lovely beachfront double rooms for around A$29 per night.

For information on everything that Ko Chang offers, check out:

A two-hour Chang Chutiman elephant trek costs about A$30. National Day of Thailand is this weekend (December 5) and... 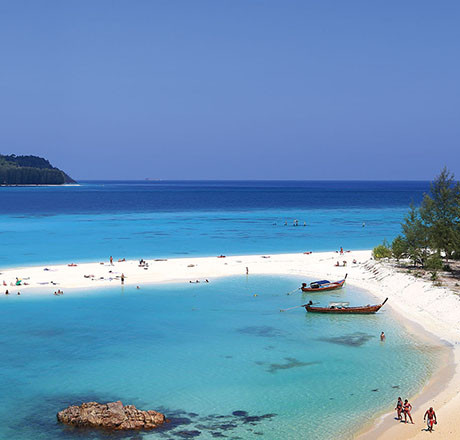 Thailand is one of the last places on earth you’d expect to... 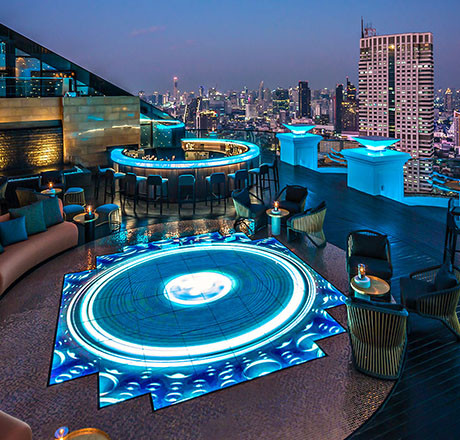 As the world’s highest gin, vodka and caviar bar, Lebua No.3... 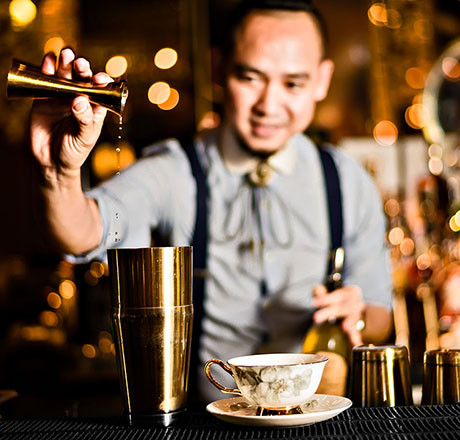 ‘Sin and be seen’ is the motto at this ritzy rooftop bar,... 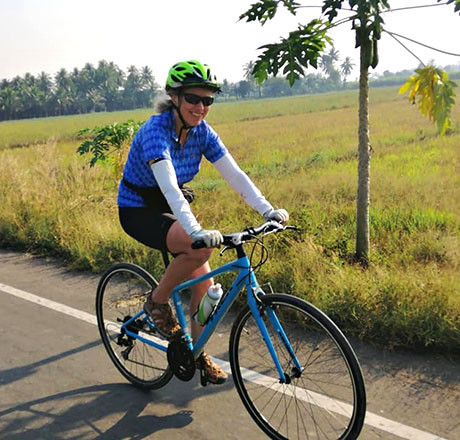 If the idea of cycling roughly 80 kilometres a day through the...

If the idea of cycling roughly 80 kilometres a day through the lush northern countryside... 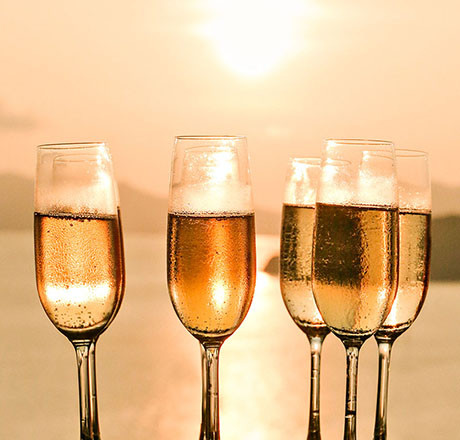 As part of the luxurious Sri Panwa Phuket, the sky-high Baba...

As part of the luxurious Sri Panwa Phuket, the sky-high Baba Nest is one of those... 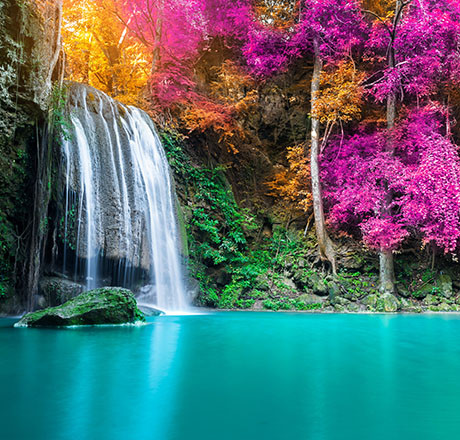 Located near the border of Myanmar, Erawan National Park plays...

Located near the border of Myanmar, Erawan National Park plays host to ... 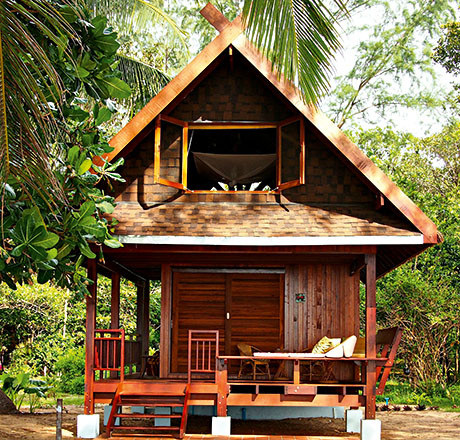 Far from the noise and crowds of Phuket, on the mostly...

Far from the noise and crowds of Phuket, on the mostly uninhabited island of Koh Phra... National Day of Thailand is this weekend (December 5) and there is no meal... 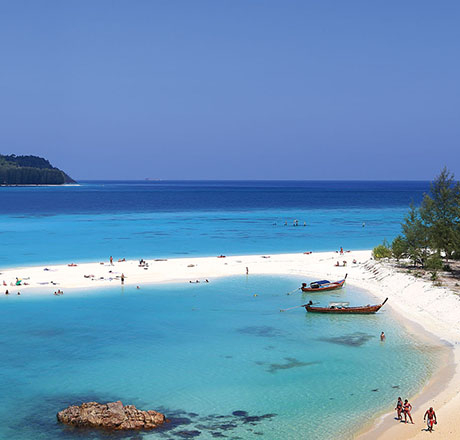 Thailand is one of the last places on earth you’d expect to find a secret... As the world’s highest gin, vodka and caviar bar, Lebua No.3 is already one... 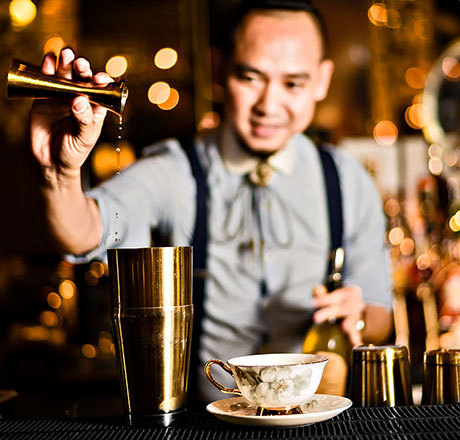 ‘Sin and be seen’ is the motto at this ritzy rooftop bar, a not-so-subtle...