From a Moses-like parting of the sea to a million-strong congregation of pink birds, these are some of our planet’s most astonishing theatricals. Here’s where to watch Mother Nature put on a show.

Hoping for safety in numbers, hundreds of thousands of sardines gather in silver tornadoes in the Caribbean Sea at the beginning of the year. But leering at them from the sidelines are sailfish – hulking predators that can clock up speeds of about 110 kilometres an hour, which makes them the speediest fish in the world. Chomp down on a snorkel and slip into the warm blue water off the coast of Mexico’s Isla Mujeres to watch as they gulp down wayward swimmers and corral seething baitballs to the surface, where waiting gulls and frigatebirds hover in the hopes of stealing a sardine of their own. Spanning up to three metres long, the sailfish is equipped with a nervous system that allows them to flash a whole host of colours and, adorned with spear-like noses and generous dorsal fins, these pelagic beasts are an awesome sight to behold. If their frames aren’t impressive enough to satisfy a desire for underwater encounters, the manta rays and enormous whale sharks you’ll spy gliding beneath the waves will surely hit the spot. Come early in the year, when the sailfish are in a frenzy before they depart in March, bellies full. 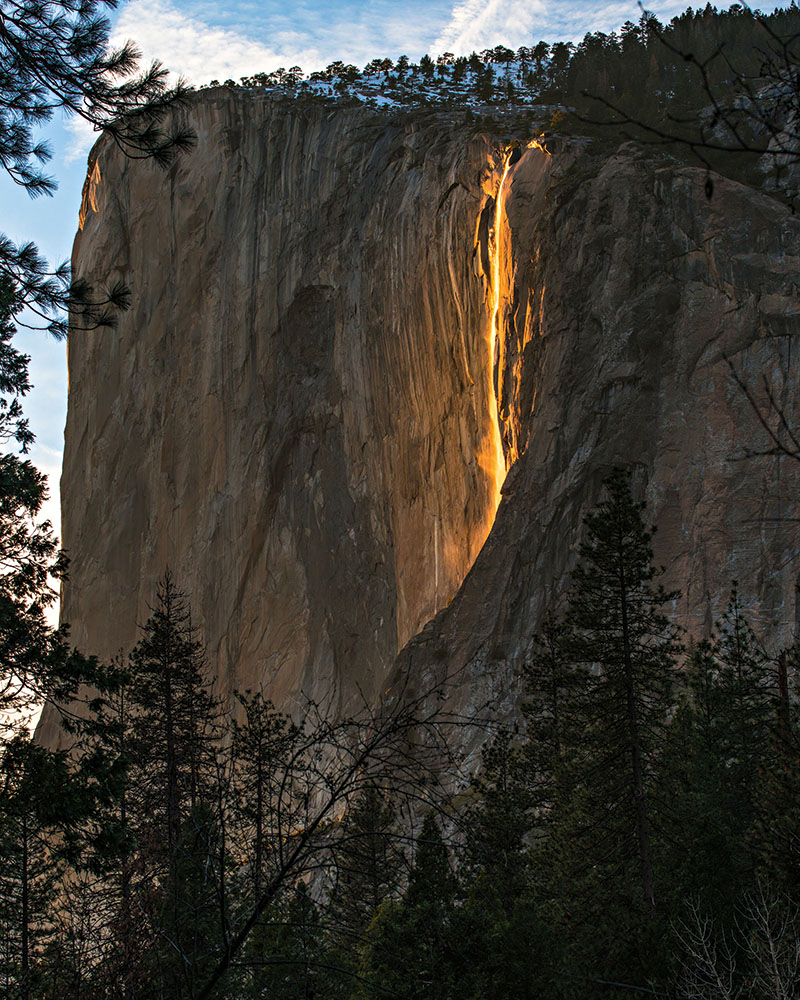 For only a few minutes a day during a couple of weeks in February you can witness a fiery spectacle at El Capitan in Yosemite National Park. Click to view gallery

All four elements of ancient Greek astrology align at the sheer granite monolith of El Capitan, in California’s Yosemite National Park. Water from heavy rains and melting snow courses across the earth, tumbling into the air as it reaches the edge, where it transforms into a blazing stream of fire. Or so it appears. For just a few minutes a day over a couple of weeks during February, rays from the sinking sun catch the seasonal Horsetail Fall, sending a dazzling gold thread plunging more than 450 metres into the valley below. Pack a Thermos, pull on gloves and a woolly hat and make for the picnic area, which offers the best views of the falls. You won’t be alone – shutterbugs have been flowing here since National Geographic photographer Galen Rowell snapped the phenomenon back in 1973.

Airborne streams of flaming green, ethereal strobes of fuchsia and smoky rivers of butter-yellow can only mean one thing: you’re catching a glimpse of the world’s greatest light show and it doesn’t require a flight across the globe to Norway or deepest, darkest Iceland. Even on shores as close as Tasmania you can eyeball the fleeting beauty of the aurora. Caused by coronal mass ejections – they happen when the sun releases a colossal burst of solar winds and magnetic fields into space – these dancing illuminations are notoriously unpredictable, but the southern lights are just as frequent as the northern. While aurora hunters need to cross their fingers for elevated geomagnetic activity, edging closer to the South Pole increases your chances of a glimpse. From New Zealand’s South Island to the more remote reaches of the world’s southernmost city, Ushuaia, in Argentina, and the island of South Georgia stranded at the bottom of the South Atlantic Ocean, there are plenty of options perfect for gazing below the Earth’s equator.

You don’t have to be Moses to make the seas part. Anyone with a plane ticket to South Korea can watch this natural phenomenon. The Jindo Sea splits to reveal a causeway connecting the meaty isle of Jindo with the small speck of land that is Modo Island, and it’s a spectacles that draws hundreds of thousands of locals and foreigners alike every April. The modern miracle – spanning an hour on just two days each year – is a result of extreme low tides. Rather than parting, the entire sea actually lowers to expose a three-kilometre-long and 40- to 60-metre-wide path. Watch as people seemingly walk on the tranquil waters, trailing off into the horizon like technicolour ants, or pull on some waders and hurry to Modo yourself while the tide still allows. On the island you’ll find a handful of homes, a beach and Baemikkumi Sculpture Park, where artist Lee Il-Ho’s larger than life ‘eroticism sculptures’ emerge from the grass and sand.

For just eight short days, deep in the belly of the Great Smoky Mountains, an ocular extravaganza takes place. Amid dense blocks of temperate old-growth forest, slow creeks and abandoned stone cottages, this UNESCO World Heritage site throngs with flying critters in the mood for love come late May and early June. Like a vast parade of fairy lights, resident Photinus carolinus – or rover fireflies – flit through the obstacle course of Fraser firs with their booties aglow to attract a mate. This species of lightning bug is the only one in the US that’s able to synchronise its flashes of yellow light with other males, and this national park is one of the only spots in the country where you can watch these forest stars festoon the foliage en masse. Log onto the USA’s National Park Service website in late April to enter the firefly viewing lottery.
recreation.gov

Spring is iceberg season in Newfoundland, Canada’s wild eastern isle. Frozen formations of all shapes and sizes drift down from the north, coinciding with the annual whale migration in the opposite direction. To celebrate, the town of St Anthony on the tip of the Great Northern Peninsula hosts all manner of weird and wonderful events as part of its annual Iceberg Festival. Hike the nearby walking trails, feast on seasonal snow crab, slurp down Iceberg Beer made with 25,000-year-old berg water and participate in a screech-in to become an honorary Newfoundlander – you’ll down a tot of local Screech rum and kiss a cod right on the gob. Wrap up your stay with the closing ceremony at the Norstead Viking Village, but not before heading out on a berg-filled boat trip with a side order of whales, dolphins, bald eagles and Arctic terns.
theicebergfestival.ca

Surveying biochemical emissions of light produced by living organisms doesn’t sound too sexy. But you know what does? Raking your fingers through glowing, neon blue pools of light on a remote Taiwanese island. The two natural phenomena are, of course, the exact same thing, and it turns out that Taiwan’s Matsu Islands are one of the best places on the globe to experience these Life of Pi-like scenes. Known as ‘blue tears’, the blooms of Noctiluca scintillans algae form an ethereal, luminous cloud around the craggy coastline of these 18 islands every year between June and August. Paint your own scenes with your toes dipped into the water or watch this otherworldly marine show unfold while crouching on the sand on a balmy summer’s night.

Following steady winter rains Namaqualand’s arid veld blooms in a riot of colour. Stout vygies brandish violet blades, golden nemesias adorn the landscape like confetti and tangerine daisies blaze across the plains. The first petals unfurl in July and the rainbow carpet rolls down from the border of Namibia over the following weeks. Make the five-hour journey north from Cape Town in early August, when the flora reaches peak saturation, and hike between the region’s granite koppies (hills). You’ll spy Lachenalias, with petals resembling scoops of boysenberry-swirl ice-cream, and watch as fields of floral faces turn to face the afternoon sun. Plant life isn’t the only attraction in this part of South Africa’s outback, either. Keep an eye out for honey badgers nosing through the fields, as well as antelope, aardwolves and rare Hartmann’s mountain zebra.

Tucked away in the Gansu Province of northwest China, there’s a rainbow that never fades. Zhangye Danxia Landform Geological Park, also known as the Rainbow Mountains, is a 24-million-year-old formation that trumps the elusive pot of gold every time. Shaped by eons of wind and rain, these sandstone, mudstone and gravel domes in a kaleidoscope of colours reach up to 3800 metres high, and have remained virtually undisturbed by humans. Drop in on a balmy afternoon during September, when the golden autumn light is strong and the palette of colours – rosy red, blood orange, sunny yellow and even a hint of dusty blue – are at their most vivid. Choose your viewpoint (we recommend nabbing a spot near the viridescent rapeseed fields in neighbouring Qilian County for striking juxtaposition) and lose yourself in nature’s psychedelic hills.

This voltaic night show will make you believe Zeus, the god of lightning, has ripped the very fabric of space asunder while showing off his party tricks. The fringes of Ologa village in Venezuela play host to an electrical hot spot, where pulsing storm clouds unleash up to 280 lightning strikes an hour on around 150 nights a year, with activity peaking in October. Generated by the perfect marriage of heat, humidity and wind blowing in from the surrounding Andes, the lightning is thought to be the most powerful in the world – and the most dangerous. A number of fishermen are struck each year, and visitors must also brave unravelling social order in a country already notorious for its cities’ soaring murder rates. If you count yourself among the daring, join a local tour to see the light show at its finest. You’ll cruise through flooded forest in Ciénagas de Juan Manuel National Park and into Maracaibo Lake, South America’s largest body of water, before venturing to Ologa. As the sun sets, kick back at your campsite and prepare to witness the night sky come alive.
natoura.com

It’s deathly toxic to almost any creature unfortunate enough to plunge into its glassy waters, but for one type of critter Lake Natron plays host to the ultimate family reunion. More than a million lesser flamingos – three quarters of the world’s population – stream past the volcanic cones of Gelai and Ol Doinyo Lengai (Mountain of God) each year to dip their toes in this Tanzanian soda mudflat. Stalking the caustic shallows, viscous with salt, they’re safe from the likes of hyenas and baboons as they build mud nests, lay eggs and feast upon spirulina, the blue-green algae that turns the birds pink and the lake cerise in dry season. Visit in November when hatchlings are beginning to emerge and the wet season is in its infancy, meaning more wildlife and fewer travellers. The moonscape surrounds and reflections of flamingos littering the 57-kilometre-long lake will overwhelm your SD card, while the bodies of calcified bats and birds that have lost their lives to the stew make for eerie imagery.

The only major meteor shower thought not to originate from a comet, Geminid is a showstopper in almost every sense. Hundreds of streaks of light splash the sky every hour amid a backdrop of stars when this celestial display peaks in mid-December. These ‘shooting stars’ travel slower than most other showers, at about 35 kilometres a second, making them fairly easy to spot, and they often arrive in bursts of two or three. Although visible from the southern hemisphere, they’re best viewed in the north, away from light pollution. Settle in for the night on a picnic rug in the countryside at an accredited Dark Sky Reserve to stand the best chance of eying the Palladian asteroid painting the night sky. From the bleakly beautiful Brecon Beacons National Park in Wales to the mountain meadows of Germany’s Rhön Biosphere Reserve, there’s a total of eight reserves for Europe-going aspiring astronomers to choose from.
darksky.org