On Tour With Team Australia

On Tour With Team Australia

You don’t have to be six-foot five and packing abs of steel to travel the world on the sports pro circuit. You just need to be qualified like Men’s Rugby Sevens team physio Katie Ryan, writes Catherine Best.

It’s 3am on game day and Katie Ryan can forget about getting any more sleep. A player raps on her door with a problem that’s now her problem. He has been up vomiting and can’t keep water down. Minutes later there’s a second knock on the door. Another player has woken, this time with a throbbing pain in his hand after his fingernail was trodden on during the previous day’s match.

“The players got very little sleep that night before having to get up and prepare for another two games, and I decided it was just easier to stay up, make an early coffee and get some paperwork done,” Ryan says. “It was going to be a long, long day – it would be 22 hours before I got a chance to get to sleep again.”

Welcome to life on the road as team physio of the Australian Men’s Rugby Sevens. In some respects, Ryan is living every girl’s dream – travelling the world with a muscular bunch of uber-athletic blokes, always on stand-by should one of them need a rubdown. But Ryan isn’t a girl, she’s a professional sports physiotherapist and mother of three, who’s second family just happens to wear green and gold and takes her to places most nine-to-fivers could barely imagine. This year the circuit includes Las Vegas, Dubai, Wellington, the Gold Coast, Hong Kong, Tokyo, Glasgow, London and Port Elizabeth in South Africa – all with two gear bags, a treatment table and 30 kilograms of sports tape in tow.

“Apart from the travel I’m just really lucky that I get to look after these absolutely professional athletes; they train super hard and, yes, there are pinch me moments when I’m doing a treatment session looking out over Dubai, or having a treatment session watching the whales swim up the coast at the Gold Coast, or treating a player looking over Wellington. They’ve just been amazing times.” 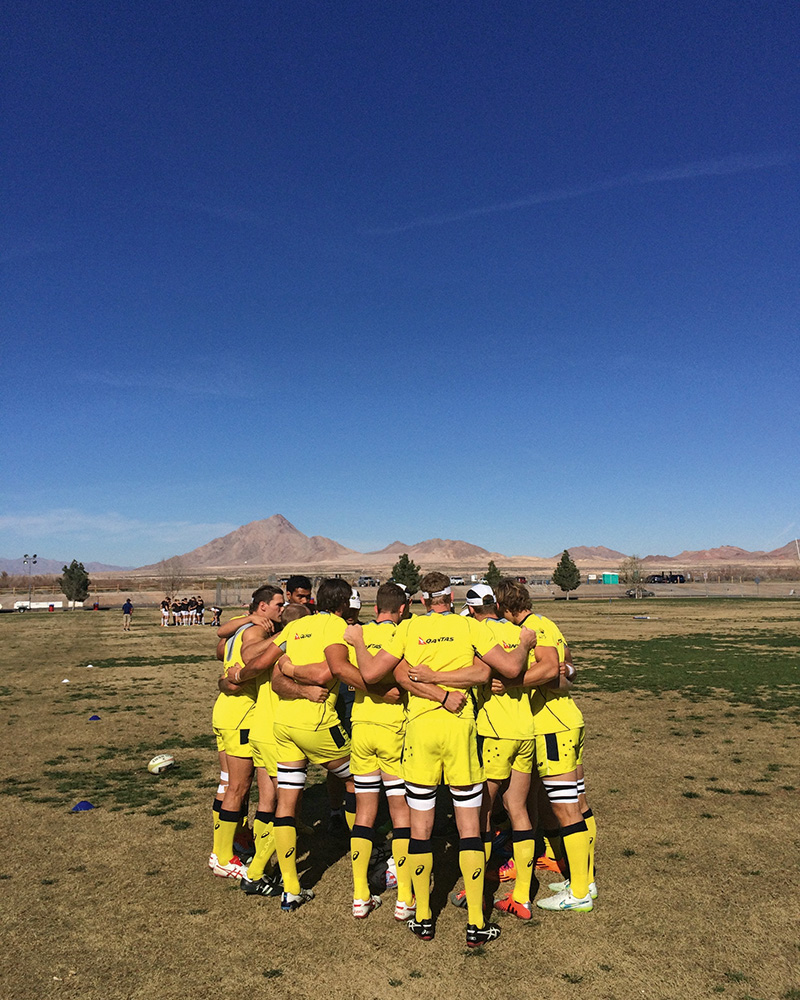 When we meet trackside at Sam Boyd Stadium in Las Vegas, Ryan, 44, has her hands full. The player who was up vomiting is being assessed for IV fluids – he’s come off the field severely dehydrated and has shed three kilograms. There are other wounds and injuries to tend to and once they’ve been dealt with, a quandary: where can two women meet in such a blokey environment? “How about I come to you?” I propose. The suggestion is met with the following text: “Where I am now in the change rooms faces the communal team shower – you would blush.”

Ryan is used to the nudity, blood, sweat and grit that comes with looking after a professional sports team – it’s part of her job description and, as the only woman on the squad, she carries out her role with dignity and respect. It’s a courtesy that is reciprocated among the players and team managers, who don’t mind giving Ryan a gentle ribbing when they see her talking to a journalist – it’s all part of the camaraderie. Humour is important when you live out of each other’s pockets on tour.

Ryan always snags the biggest hotel room during tournaments, but it’s not really her own. As the primary person responsible for player welfare (team doctors don’t come on tour), she’s on call 24/7. In Vegas her day starts early with the players filing into her room to ‘check-in’, a game-day ritual where they are weighed, have their physical stats recorded and any issues addressed. Next it’s off to the pool for ‘activation’ to start preparing for the day’s matches (often there are two games, each consisting of seven-minute halves with a two-minute half-time). Ryan will spend up to an hour strapping and prepping the players. Soon they are warming up against the dramatic backdrop of the arid Nevada mountains, then it’s show time.

“We go out on the field and the strength conditioner and myself have to run water during the match. Because it’s so intense you’ve just got a short time to get on and off. I almost got tackled by a Scottish player today, so it’s fast and furious and then it’s back off to manage any injuries.”

After the game there is more strapping, ice, hydration and perhaps some manual therapy as Ryan and the team assess whether some players can “back up” for another match. Fourteen minutes of competition might sound lightweight but the sport is punishing; these are colossal, super-fit athletes who charge the field with lightning speed and brute force. Peripheral injuries to ankles, knees, joints and backs are common, as are contact- related wounds and soft-tissue damage, such as strained calves and hamstrings. Hydration and nutrition are perpetual challenges, particularly on long-haul flights when you are dealing with bear-like men crammed into chicken-class seats.

“We know anecdotally that long periods of travel on planes affects athletes – it’s a real concern for player welfare,” Ryan says. “This can be the effects of sitting in air-conditioning for anything from three to 22 hours, sitting next to people who are unwell and picking up an illness, losing weight from eating small, irregular meals that are not optimal for athletes, and the effect of jamming six-foot, five-inch, 100-kilogram players in economy seating for long periods – expecting them to be able to have any sort of quality sleep sitting upright.”

Ryan – who graduated as a physiotherapist in 1993, becoming a sports physio in 2000 – spent two decades working with rugby union clubs before joining the Rugby Sevens full-time in 2014 when the program centralised in Sydney. Between running two physio practices with her husband – former Australian Wallaby’s physiotherapist Andrew Ryan – and raising three children under the age of 11, Ryan has little chance to sit still. And her job comes with sacrifices: in Vegas she misses two of her children’s birthdays, and Mother’s Day is spent on tour in Scotland.

“Missing two birthdays was a little bit devastating,” she says. “I guess the biggest thing being a mother is that there’s just no way I’d have this opportunity normally with three kids at home if I didn’t have a great team at home as well – my husband, mother, aunts, uncles – everyone pitching in to enable me to be able do this.”