Cam Cope’s sense of masculinity takes a beating in the festive heart of Polynesia.

Blondie’s powerful hands grip my shoulders and drive me up against a pole. Her muscular thighs lock around me and I’m at the mercy of her gyrating hips. Like a hunter’s spotlight on a frightened rabbit, her eyes beam into mine. I’m pinned with no escape and am about to be grinded by a 90 kilogram Samoan drag diva.

Up close I notice the mascara running down to her five o’clock shadow, before she leans in theatrically for a kiss. The crowd erupts in rapturous shrieking. Wince. I dodge her aim and somehow manage to escape with no more than a splash of tropical sweat and a stubble-graze. Is this what rugby feels like?

I’ve just flown halfway across the Pacific for Teuila Festival, a celebration of traditional Samoan culture and one of the largest annual events in the first nation this side of the international dateline. Somehow I’ve ended up at Maliu Mai Bar and Grill for a drag show. It’s the last thing I expect to experience but it’s a fascinating window into a part of Samoan culture far more traditional than it might first appear.

Blondie gives me a wink and saunters back to centre stage before finishing her pantomime to a rousing reception. She, like the rest of the performers, is a member of a third gender known as fa’afafine. Born biologically male, fa’afafines take on female roles, sometimes flamboyantly, and are accepted in traditional culture. They’re respected for their dedication to family and are famous for their wicked sense of humour, including taking advantage of palaalagi (foreigners).

From the moment it kicks off in the centre of downtown Apia (Samoa’s capital), it’s clear Teuila Festival (named after the red ginger flower that blooms every September) is a blossoming expression of Samoan identity designed to strengthen and promote the country’s unique place in the world. Ministers address the crowd in floral open-necked shirts, clearly articulating that maintaining the fa’a Samoa (a traditional philosophy literally meaning ‘the Samoan way’) is their best chance at successfully navigating a challenging modern world.

After the speeches conclude, 50 women in teuila wreaths and matching dresses burst into song, swaying their hips elegantly across the ceremony ground. Shirtless men stalk the edges of the field, shrieking in high-pitch bursts and striking intimidating poses to a barrage of percussion from muscular drummers.

I’m beginning to realise that, if I were foolish enough to base my sense of manhood on relative body size, travelling to Samoa would be an emasculating experience – even if I did escape the clutch of a fa’afafine’s legs. It’s as if the stages of adolescence are leap-frogged here. Boys are born into effortlessly hulking frames upon which they build only more bulk through years of rugby and a rich tropical diet. By 13 they’re young men, not teenagers. By 30 they’re fearsome, arse-kicking, tattooed warriors. Ironically, I’ve yet to encounter a less menacing culture.

Guide Kilisi Solamon explains that Samoan tattoos, for instance, are far from the bad-ass symbology they’re sometimes associated with. I watch a young man held down by three assistants to a chief tattoo artist. The poor lad’s body is taut and his face grave as a three-inch boar tusk filled with ink is repeatedly driven into his lower back. Traditional Samoan tattoos are symbolic of courage, service and responsibility to family and community, Kilisi explains. Rather than symbolising toughness (despite clearly being excruciatingly painful), they are a way of displaying you can finish what you start. All men who get the traditional full tattoo (a universal design that fills most of the flesh from the knees to the hips) have to endure more than two weeks of pure agony. “If they can handle that,” says Kilisi, as the tattooists wring out a blood-soaked cloth, “what excuse have they to not handle family responsibility?”

During the week I explore a kind of mini-village that has been set up to showcase local crafts in action. Traditional carvers are at work on outrigger canoes and ceremonial kava bowls, while teams of women pound tree bark into a decorative cloth called tapa. Kilisi shows me how to start a fire with nothing but two sticks and a dry coconut husk, before a police marching band distracts me. Curiously the policewomen are all wearing pants while the men wear skirts. They’re called lava-lava and are worn for comfort and cultural pride, I’m told.

I notice yet another local trend that defies my Aussie concept of masculinity: it’s not just the women who have flowers behind their ears – even a few tough-guy tradies at a building site across the street are wearing them. Kilisi explains they’re a pre-Facebook display of marital status. Behind the left ear signifies single, behind the right: taken. A beautiful tanned woman with a particularly large hibiscus flower behind her left ear approaches. I wonder if the larger the flower, the more single the girl?

One morning I climb aboard a spectator boat to watch the ‘Fautasi Ocean Challenge’, an annual longboat race in Apia Harbour. There’s US$13,000 in prize money at stake for first place and the atmosphere is amped. Spectators line the  seawall shoulder-to-shoulder along the harbour as the 50-man crews pull their fautasis to the starting line. A cheer erupts when the starting gun is fired for the first ever all-female team to get a head start, then there is a roar as the gun fires again for the six other boats to dip their oars. The coxswains gesticulate dramatically for their crews to heave in time to drummers, who  sit balanced at the bow of each boat. 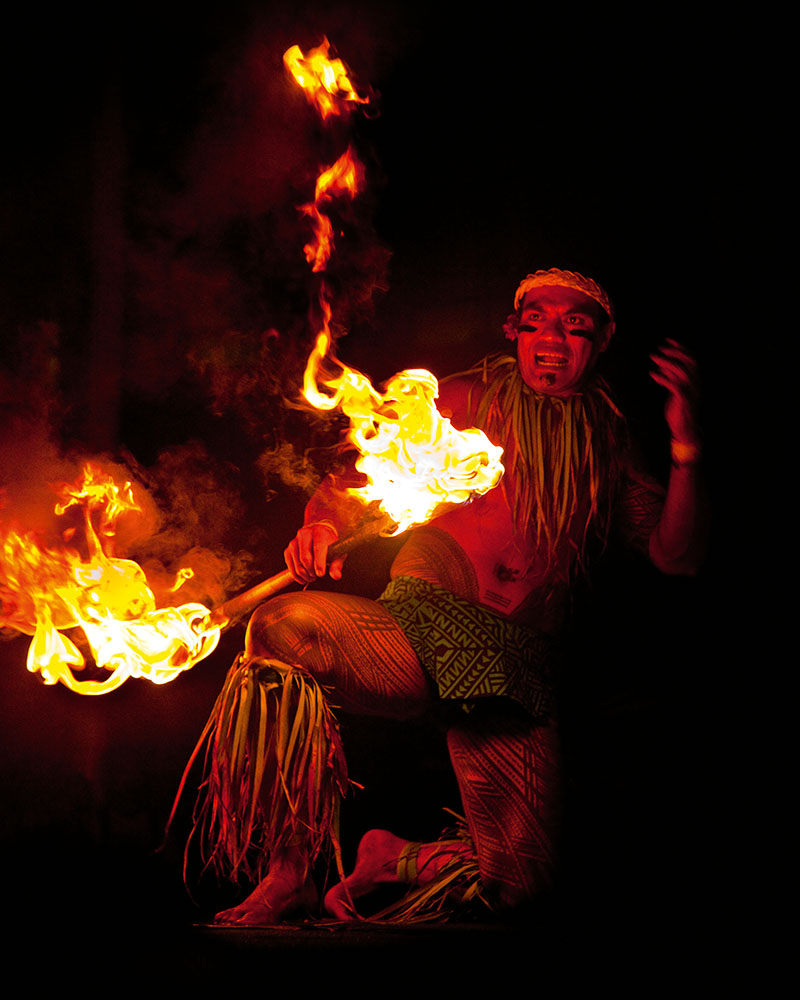 Some 350 oars rip through the lagoon, soon leaving the palms and church spires of Apia in their wake. The race is a 40-minute-long haul to the reef and back, and plenty of churning water opens between the vessels by the time they approach the finish line. The crowd’s enthusiasm has not waned by the time Tava’esina pulls across the finish line victorious. The crew members take an exhausted pause before saluting the hysterical kids on the shore with spirited cries and a line of raised oars.

Back on land I satisfy my craving for seafood with a local dish called oka (fresh tuna soaked in coconut cream, lime juice and chilli), before escaping Apia for a swim at Piula Cave Pool in the afternoon. Soaring harmonies float peacefully down the hill from a choir to the still, clear water where I shelter from the heat. Driving back to Apia at sunset I pass through idyllic fields of taro, and villages set amongst strangling fig creepers, breadfruit and banana trees. The sticky-sweet aroma of tropical fruit breezes through the window and the setting sun paints a bright orange canvas behind silhouettes of families playing volleyball.

The buses that pass by are tropical explosions of colour, with wooden cabins hand-built on the back of Toyota truck chassis. Their sides are painted in bright yellows, greens, pinks and reds and are emblazoned with hibiscus flowers and names like ‘Poetry in Motion’, ‘Sweet Smile’, ‘Jungle Boys’ and ‘Paradise in Heaven’. Tinny Samoan pop (the dark forces of auto-tune have found Samoa) blasts from open wooden-slat window frames, yet the bus’s speed never exceeds 50 kilometres an hour. We stop for a family of piglets to cross the street next to a road sign that says ‘alu lemu’ (go slow). Perhaps it’s a national motto. 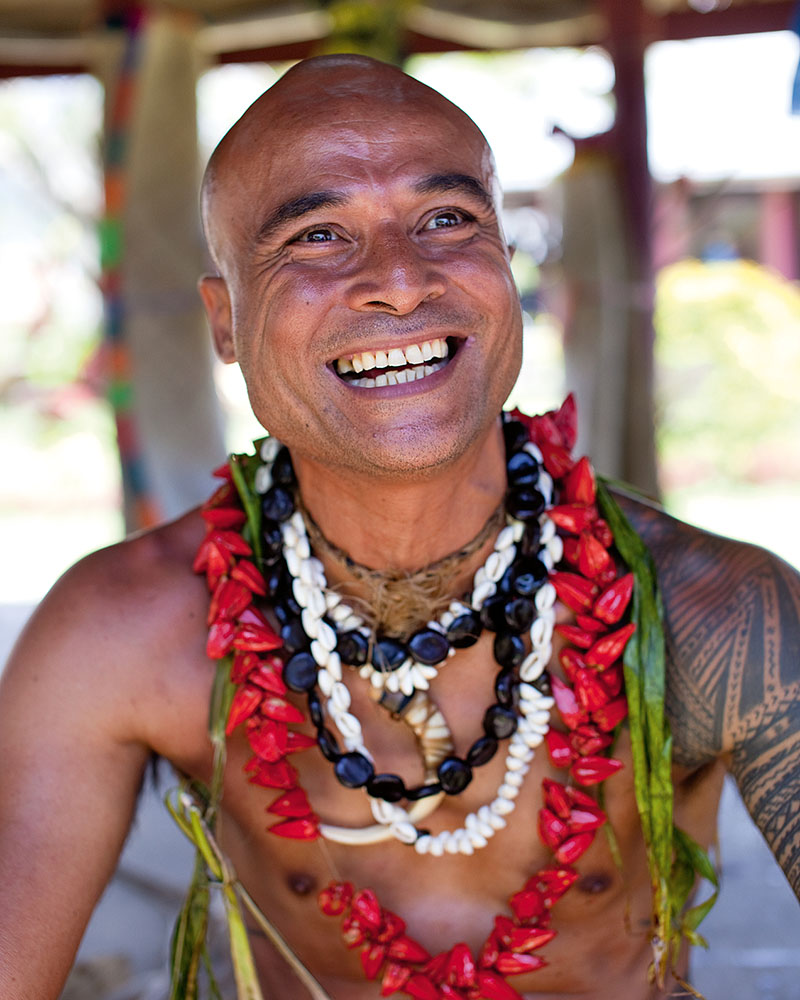 That night a group of fire-knife dancers impress on the main stage in downtown Apia. Think flinch-inducing fire twirling with blades. Over the next few days I attend the Miss Samoa beauty pageant and the Raggamuffin reggae and hip hop concert. The pageant is a gala affair but somehow manages a rural feel. Humble culture and tradition are championed, but commercial promos and sexy sarongs sneak in at the margins. The title for 2012 goes to 20-year-old Janine Nicky Tuivaiti, a Samoan expat from Auckland, though my favourite crown awarded is ‘Miss Internet’. Where else could such a title be bestowed without any wry allusion to porn? At Raggamuffin a crowd packs in to see local hip hop hero Savage play his new single ‘Love the Island’, a track that recalls his Samoan roots, written after he made it big in the United States.

The next morning I hike into the hills above Apia to visit one of the most successful authors of all time. After a sweaty climb in the heat I arrive at a small clearing on the top of Mount Vaea, where a tomb dating from 1894 humbly rests. Strangely, Robert Louis Stevenson first visited Samoa years after he wrote Treasure Island. Perhaps if he had come before penning his famously dark portrayal of a tropical island he may have put a more benevolent spin on things. After arriving he decided to build a residence on the side of the mountain from where I now have a beautiful view of Apia Harbour through the canopy.

Looking over the turquoise lagoon I can see why Stevenson chose to spend the last four years of his life here and, after a taste of Teuila Festival, I can see why he fell in love with the fa’a Samoa. The faint sound of a roaring bus engine drifts over the rustling of leaves in the breeze. I can’t wait to climb aboard and explore what more treasures lay hidden in these islands.

Set in the tropical hills of Tapatapao above Apia city, Dave Parker Eco Lodge is a budget way to avoid the downtown midday heat and enjoy the city lights of Apia at night with a drink at the cocktail bar. A bungalow sleeping two starts at US$50 per night. Bookings essential.
daveparkerecolodge.ws

Set right on the harbour in the centre of Apia, Aggie Grey’s Hotel and Bungalows offers a piece of history and colonial charm. It dates back to 1933 when it first became renowned amongst American servicemen, and later played host to Marlon Brando and Gary Cooper, among other A-list Hollywood stars. Private rooms start from US$140 per night.
aggiegreys.com

The best time to visit Samoa is during the dry season from May to October. Teuila Festival is held every September.
teuilafestivalsamoa.com 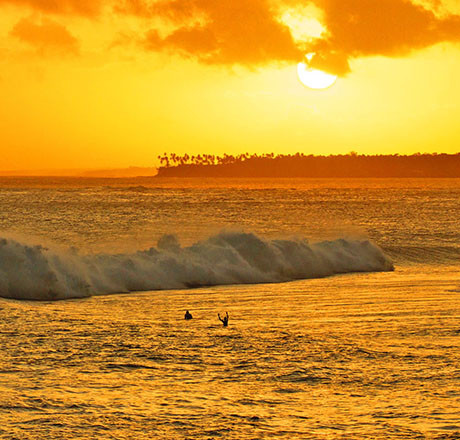 Catch world-class waves without the crowds in a Polynesian...

Catch world-class waves without the crowds in a Polynesian paradise. Despite being the... 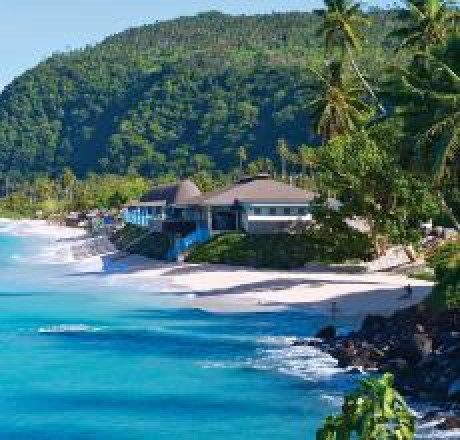 In 1993, Taula and Litia Sini closed their small shop on Upolu...

In 1993, Taula and Litia Sini closed their small shop on Upolu Island and restored this... 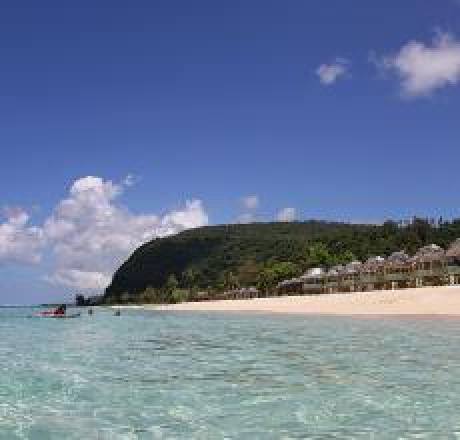 When you hit Upolu, one of Samoa’s main islands, and see...

When you hit Upolu, one of Samoa’s main islands, and see Lalomanu Beach you’ll... 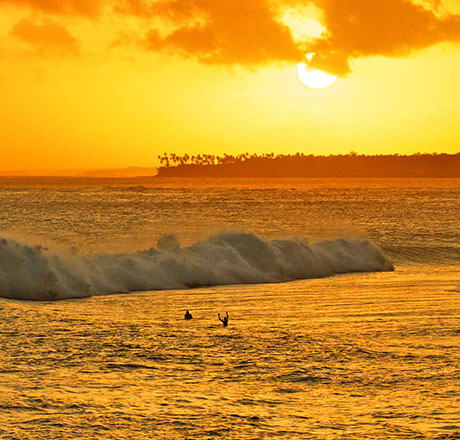 Catch world-class waves without the crowds in a Polynesian paradise. Despite...

Catch world-class waves without the crowds in a Polynesian paradise. Despite being the... 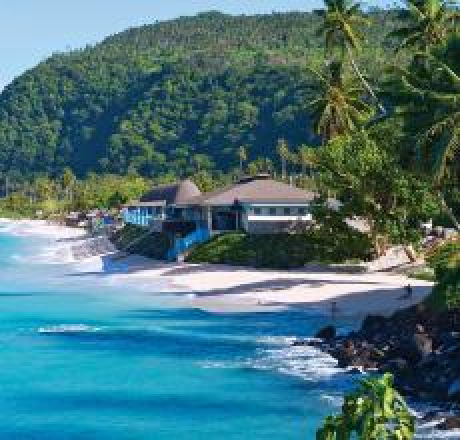 In 1993, Taula and Litia Sini closed their small shop on Upolu Island and...

In 1993, Taula and Litia Sini closed their small shop on Upolu Island and restored this... 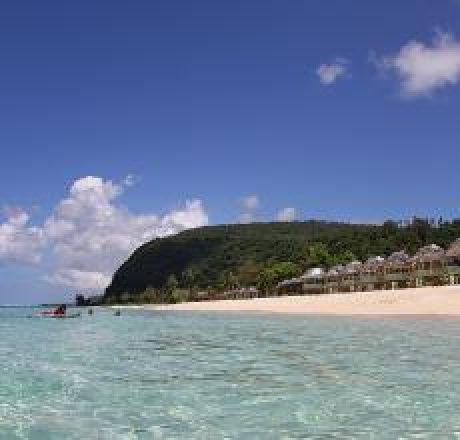 When you hit Upolu, one of Samoa’s main islands, and see Lalomanu Beach...

When you hit Upolu, one of Samoa’s main islands, and see Lalomanu Beach you’ll...