One minute I’m eating breakfast in the offbeat cultural hub of Northbridge on the edge of Perth’s CBD. Twenty-five minutes later – no speeding involved – I’m in the Swan Valley wine region, the West Australian capital’s answer to Melbourne’s Yarra Valley or Sydney’s Hunter Valley, except closer. In fact it’s practically a suburb, albeit a rural one.

The scene here is all storm-grey eucalypts and red dirt mixed with luminescent green vines that march in military-straight lines through rectangle-cut acreages. Mission-brown brick homes, a nod to the area’s southern European immigrant history, add an urban twist to the farmhouse setting. The region’s Food and Wine Trail is a navigational cinch. The major road does a 32-kilometre loop around the region’s 40 wineries and 70 or so restaurant and food venues. It’s well signed so you can follow your nose rather than a GPS.

What it lacks in vineyard stereotypes – rolling landscapes and rusticity – it makes up for in earthy Aussieness. The pretty colonial town of Guildford, the gateway to the region, has a main street of antique shops and cafes shaded by bull-nosed verandas. There’s a little church, heritage-coloured pub and other old colonial buildings clustered along the railway line. Nearby, the rotted gums and dried mud on the banks of the Swan River conjure scenes from a Tom Roberts painting. Add dry heat and WA’s big blue skies to the mix and there’s no wine region quite like it.

While there’s chilled verdelho aplenty in the Swan Valley, I can’t help thinking the mid-summer heat calls for a cooling ale. Happily, and somewhat quirkily, Perth peeps, who think nothing of a casual trip to the Swan Valley, don’t mind mixing their drinks. The region, in step with the craft beer trend, now has six breweries. While I can tell a riesling from a chardonnay and shiraz from pinot noir, I’m less sure of my witbiers, IPAs (India pale ales) and stouts. With the help of an abstaining driver, I’m pit-stopping around the region to see if I can’t convert.

If you want to know how hops got hip in Australia, WA is the place to start. The state’s craft brewing goes back about 30 years, beginning with the opening of Sail and Anchor, the first brewpub in Fremantle. Since then local microbreweries such as Matilda Bay and Little Creatures (despite recent sell-offs) have set the stage for the raft of brewpubs and newcomers that have made craft beer more or less mainstream.

The Swan Valley’s breweries – like its wineries – are a mix of styles. You can go for a pub atmosphere, German beer hall or a traditional vineyard setting. The proximity to the city makes it an accessible place for a drink or meal. The result is lots of people and lots of fun.

Superlatives abound at my first stop, Mandoon Estate’s Homestead Brewery. Mandoon is the darling of Swan Valley, with contemporary wood and corrugated-iron buildings, an awesome deck and beer garden with manicured lawns and vineyard views.

I plonk myself down inside at the big shiny bar, the Kaspar Schulz German-engineered kettles gleaming silver behind glass. It’s early for beer drinking so I have hospitality manager Gavin Fyffe’s full attention. He tells me the owner is a Swan Valley local of 50 years who lives down the road. The family started producing wine in 2010 and the restaurants and eating areas followed.

“Beer was always part of the big picture, but the brewery opened only 12 months ago,” he says. In that time, the number of beers brewed has gone from four to 10.

My Number 1 Belgian-style pale ale is served in a fine-lipped glass, chilled to the touch. It’s a good start to the day. I can detect the smooth malt, biscuit and fruit tastes I’m supposed to, if not the peppery finish.

“We really made this beer to check out how the brewery system all worked, but it turns out we liked it and started selling it,” says Fyffe. “In the first six months it was our number-one selling beer and one year down the track it’s still on tap.” 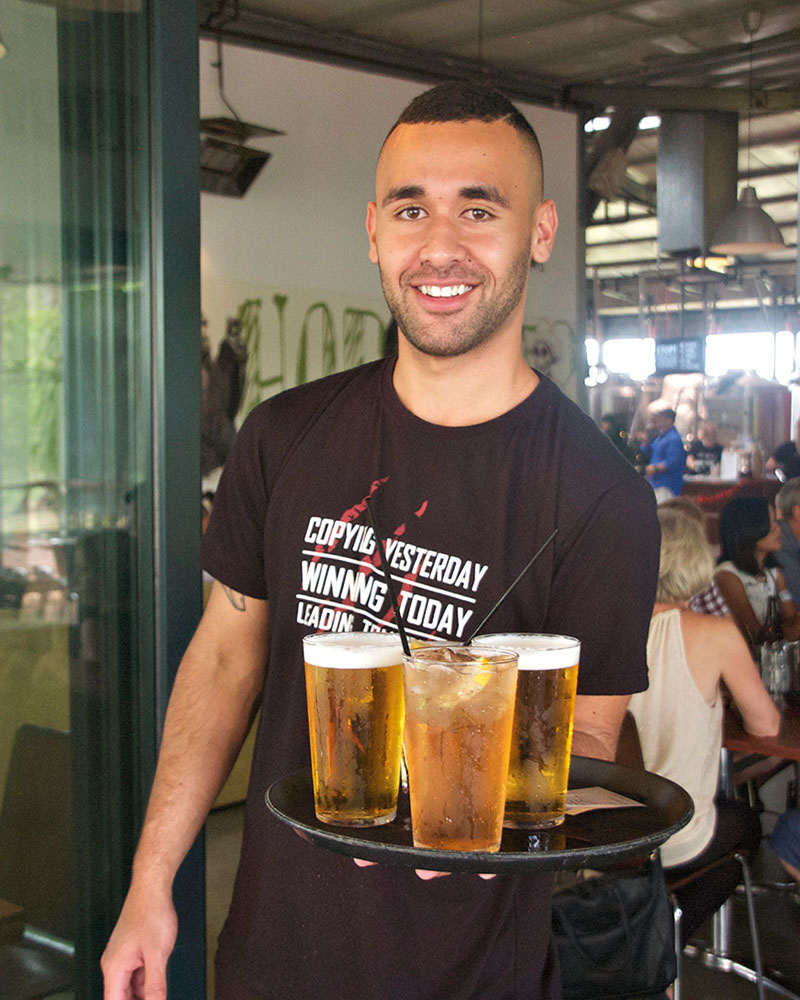 Serving up the drinks at Mash Brewery. Click to view gallery

At the other end of the palate spectrum is the Velvet, a black cherry sour. Matured in old oak barrels from the winery, it has a stewed fruit flavour with cinnamon and chocolate thrown in. I also try Kaiser’s Choice. This German-style wheat beer with banana and clove notes was a gold medal winner at the Australian International Beer Awards last year.

Awards matter in beer circles, as I find out at Mash Brewery, which has a wall of them decorating the main bar. Mash is a modern establishment kitted out like an American roadside bar, with tunes, cool art and a vibe that feels like a party warming up. When I arrive, just before midday, the trestle tables are filling with punters ordering buffalo wings and other mouth-watering bar food. Enormous stainless-steel beer kettles fill the room, and there’s a queue at the bar. Behind it, Joshua Banks, a craft-beer nut, tells me Mash is almost nine years old, its success largely attributed to two master brewers who have collaboratively brought home the wall of awards.

Mash’s champion beer is Copy Cat IPA, an American-style India pale ale with a “tropical, piney, resinous hop bitterness and aroma”. Banks tells me the beer initially had a mixed reaction from the makers who didn’t want to replicate the style: “They said, ‘We’ll only do it if we call it Copy Cat.’ It went on to become the Australian International Beer Awards  champion beer in 2014.” 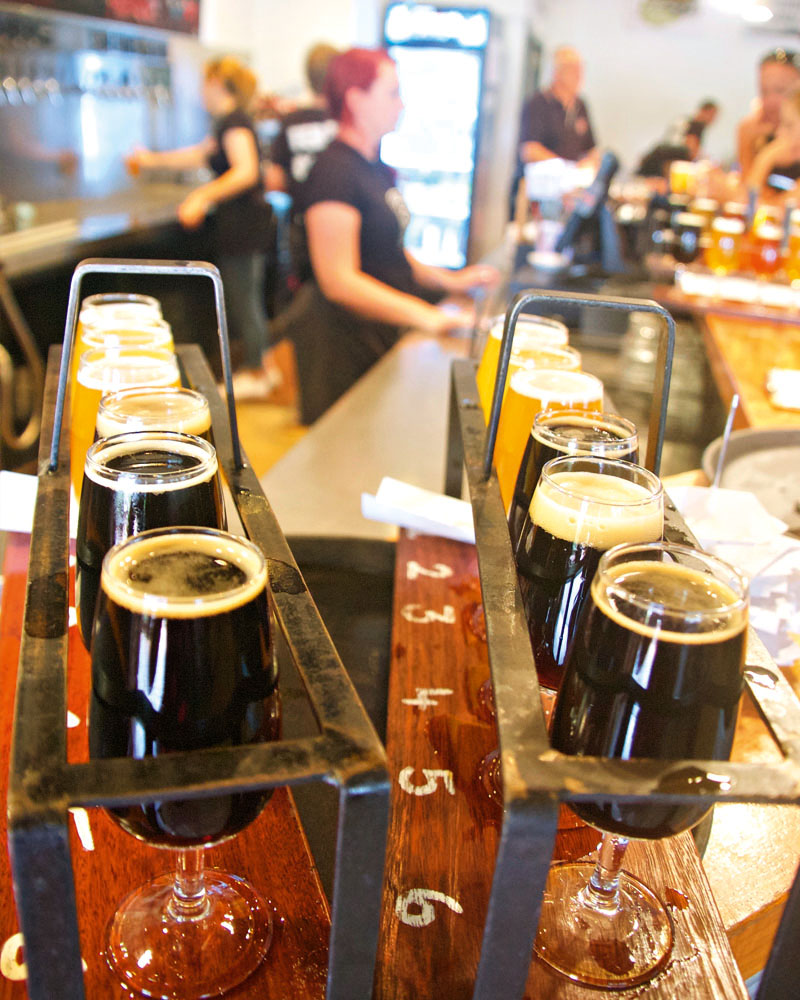 Tasting paddles lined up at Feral. Click to view gallery

Even for a novice, Copy Cat is easy drinking. Not so the experimental Cold Brew Coffee is the New IPA. Apart from a name that’s a total mouthful, this black, malty Scottish ale has a creamy caramel flavour and a coffee finish. It’s an intriguing on-trend concoction developed at Mash’s sister venue, 3 Ravens brewery in Melbourne.

“We put non-roasted coffee through a gravity filter with cold water (not hot), which extracts fruit, so there’s a hoppy flavour instead of roasted bitter flavour, but a) you gotta like beer and b) you gotta like coffee,” says Banks.

Happily I can tick both these boxes, although in this case one is more than enough.

By the time I get to Elmar’s in the Valley I feel like I’m getting a handle on at least a few of the 20 or so craft brews on offer in the region. Cue my next drink – a one-litre stein of Ein Stein Pilsner, a malty, hoppy, easy-drinking brew with honey notes. It’s Elmar’s most popular beverage and, for a little extra, you can buy the famed oversized drinking vessel.

Ten-year-old Elmar’s is owned by Elmar and Anette Dieren, a German couple, who, when missing their homeland cuisine, opened a German smallgoods store in Perth. When Elmar suggested opening an authentic German brewery, Anette intoned, “You can’t have beer without food.” The restaurant now serves gutsy dishes – pork knuckle with sauerkraut, grilled bratwurst, cheese kransky and its own beer bratwurst – that pair perfectly with a pint of the good stuff.

Gleaming copper kettles stand behind the main bar. As I’m snooping around them, oxygenating hops hissing, I meet Elmar himself. He’s a kind of Boris Johnson type – big with white hair and rosy cheeks. “The hops, the malt, the process,” he tells me, beaming excitedly, “everything is imported from Germany. Germans visit and they think the beer here is more authentic than the beer at home.”

I take the rest of my stein outside to the grassed area shaded by gum trees where a local informs me this is the biggest licensed beer garden in the southern hemisphere.  “It goes off during Oktoberfest,” he says.

I’m not sure I can handle another stein, but there’s one more stop that comes recommended: Feral Brewing. When we pull up into the red dirt car park I know why. It’s in a building that looks like a cross between an unassuming farmhouse and an outback pub, with veranda seating and a beer garden crowded with market umbrellas.

Feral is by far the most serious about educating its guests. The creative brews – from citrusy lagers to Belgian sours – can be tasted from small glasses on wooden paddles. In 2015 Feral’s Watermelon Warhead, a light, sour German wheat beer brewed with half a tonne of local watermelons, was awarded Champion Beer at the Australian Craft Beer Awards. But the drop that gets the most attention via word of mouth and on Facebook pages such as Perth Beer Snobs is the Hop Hog American IPA. My tasting notes point out lemon and pine and a slightly sweet taste “which makes it a perfect drink for newbies to the IPA style of beer”.

I’ll drink to that.

All the major Australian airlines, including Virgin Australia, fly to Perth from other capital cities.
virginaustralia.com.au

Alex Hotel is Perth’s ode to boutique cool in Northbridge. Its 74 rooms range from compact, with just enough room for a queen-size bed, to large enough for bunks or a whole family. There are a number of impressive public areas, too, including a roof terrace that, with its city views, is perfect for a sundowner. Rooms from about US$155 for a double, including breakfast.
alexhotel.com.au

It’s easy enough to do a self-driving tour of Swan Valley’s breweries, but if no one wants to be the designated driver – who could blame them? – there are a couple of local tour companies who’ll get behind the wheel for you. Beer Nuts and the Brewers Dray have a number of offerings.
beernuts.com.au
thebrewersdray.com.au