The Art of Travel

The Art of Travel

Ken Eastwood heads to the heart of Arnhem Land in the Northern Territory.

The sight is breathtaking. Never, anywhere in Australia, have I seen such a density and diversity of Aboriginal art on the one rock wall. Tens of thousands of years of history’s pages have been laid on top of each other. Each tells stories of lives lived and game hunted, rituals and spirit figures, strange visitors and the arrival of guns in Australia. There are faint purple ochres, reds and yellows, more recent white-ochre paintings and, most recently of all, blue paintings using Reckitt’s Blue soap – a sort of washing powder that came with the Christian missionaries. The layers of subject matter could form an encyclopedia.

There is a magpie goose drawn X-ray style with a yabby in its stomach. There are barramundi, dugong, sawfish, Macassan traders, stingrays, a man smoking a pipe, two rifles and enough handprints to form a deafening round of applause.

But it is silent. It is a privilege just stepping on this hallowed ground, let alone witnessing this majestic spectacle, and our small party is suitably reverential. On the floor of this protected cave are circular grooves where people over thousands of years have ground ochre. In the corner, stashed into a crevice, is an ancient skeleton, now a bundle of sticks and bleached bones.

We’re near Mt Borradaile, in a special area of north-west Arnhem Land, where visitors are welcomed and introduced to its splendour. More than 30 years ago, a buffalo hunter called Max Davidson stumbled upon the incredible art of the area and over time he was given permission to run a tourism venture here. The multi-award-winning Davidson’s Arnhemland Safaris has now been running for 31 years, introducing about 700 people each year to Arnhem Land’s beauty, rich wildlife and culture.

And as Max knows, the 700 square kilometres of land he cares for is extraordinary.

“There’s so much art here, some I’ve never even been back to,” he says. “We find some stuff that is so remote you can be assured that no white person has ever seen it before. We find ceremonial areas; we find artefacts – it’s really mind blowing.”

As a special treat for repeat guests, Max and his capable crew sometimes organise special off-track exploratory trips, where they go looking for more hidden treasures.

Even the campsite here is a bit of a hidden treasure. It has an inviting pool, deluxe cabins, tented cabins with ensuites and a swish new bar and lounge. It’s about an hour’s flight from Darwin, though it’s more fun to drive a 4WD through Kakadu and then into Arnhem Land. Either way, you’ll need a permit to explore Arnhem Land’s secrets, but Max will take care of all of that for you.

We make sure to include on our permit a stop at the Injalak art centre at Oenpelli, so we can see today’s painters and screen printers at work. We also take the time to do the Injalak Hill tour to get an introduction to the wealth of rock art.

Once at Davidson’s camp, all tours, food and accommodation are included, so you only have to pay for alcohol; don’t be tempted to BYO, as it's illegal to bring alcohol into Arnhem Land.

We meet our tour guide, the tough-as-nails Clare Wallwork, a long-term outback guide whose safari singlet top reveals arms rubbed raw from mozzie bites. We accelerate through the savanna of woollybutts, stringybarks, livistonia palms and pandanus in a 35-year-old 4WD, which is missing its windscreen and various other bits. “I’ll just turn up the aircon a bit,” jokes Clare. 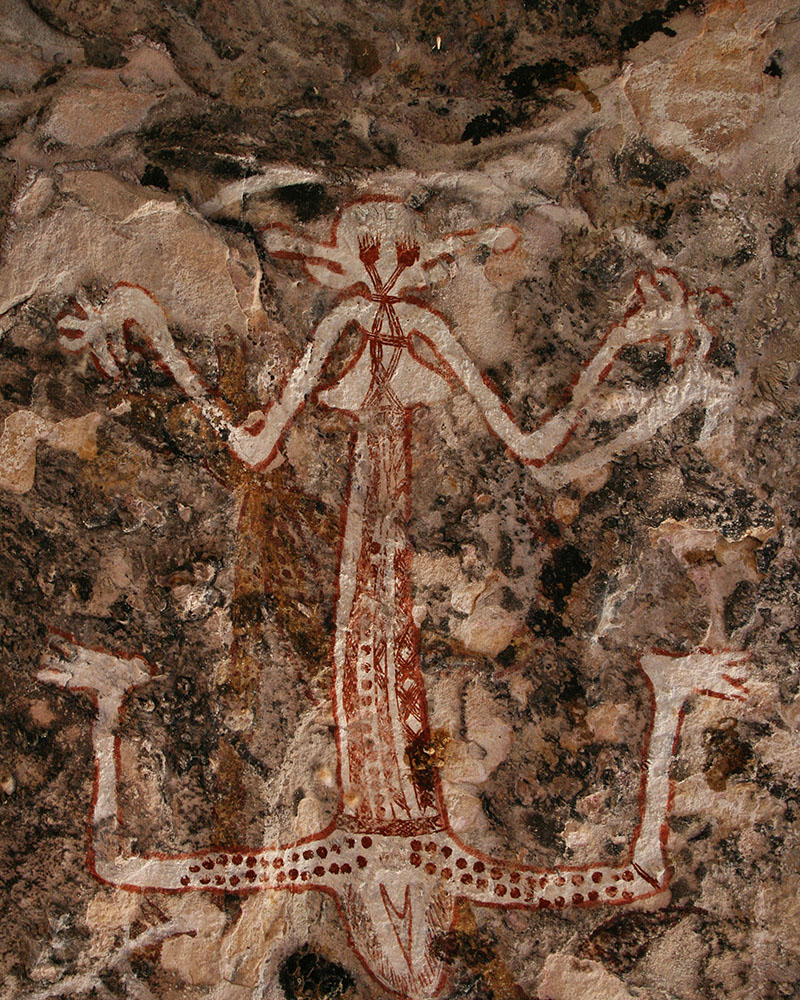 The wife of ‘lightning man’, who clashes basalt axes together on his elbows and knees. Click to view gallery

Clare then points out a billy goat plum, with small green fruits the size of an olive. “These plums are said to have 50 times more vitamin C than an orange,” she says. “A lot of early explorers and white settlers would be sitting under a billy goat plum, dying of scurvy, but they wouldn’t touch it because it was supposedly the food of savages.”

Next Clare introduces us to soap bush, quinine trees and flowering turkey bushes. “They are used for aching joints,” she says, rubbing the leaves and purpley pink flowers together to make a pungent lemony scent. It even smells medicinal.

Later, on a walking tour, we pass a paperbark swamp with frog-mouth lilies and flowering wattles, to an area of carved out dark catacombs with hidden rock pools and microbats flitting around. Rock figs stretch up and around the entrance to the catacombs. More art adorns the walls, including simple figures standing in a line holding hands as if they were dancing.

In one secret little hidey-hole is a cache of artefacts, which show the eons and clash of cultures here – a ball of beeswax, wooden spear points, balls of ochre, fire sticks, a stone adze, a tin matchbox and a hand-carved rosewood domino. “This was found exactly like this,” Clare says. 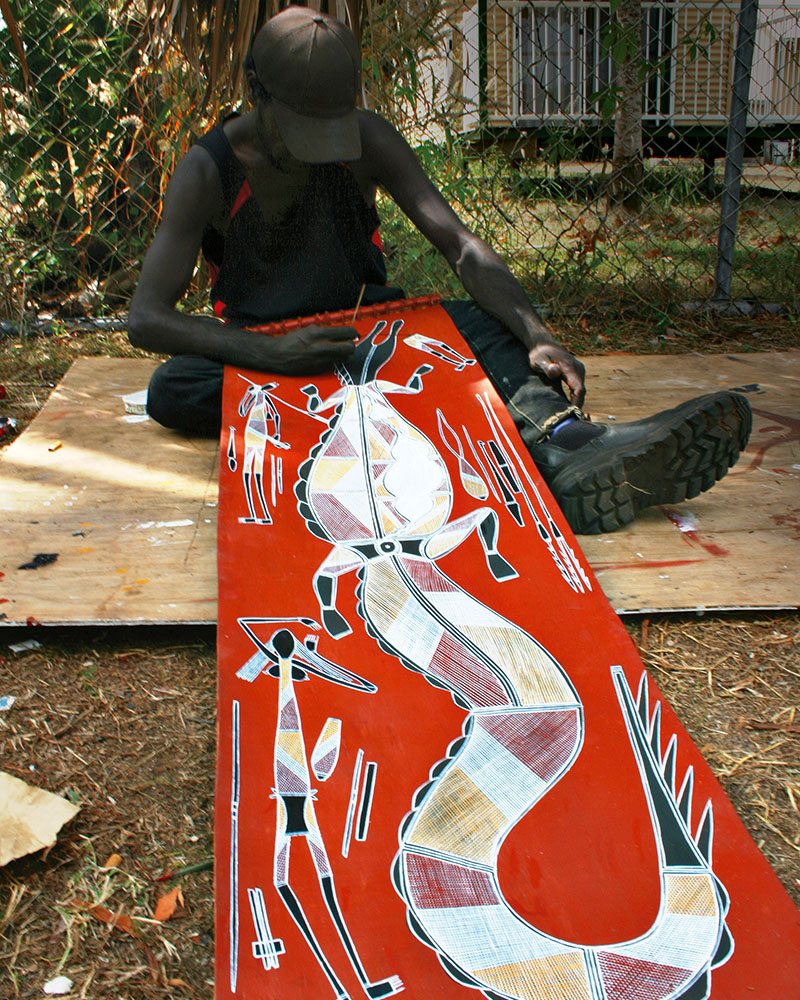 After a much-needed dip in a stunning pandanus and paperbark-lined waterhole, we cruise on to a three-kilometre lily-covered billabong, surrounded by thousands of waterbirds.

The sun sets and paints the sky and water gold, orange and yellow. Whiskered terns fly over the water. Darters, pied cormorants and comb-crested jacanas are everywhere. Not to mention rainbow bee-eaters, spoonbill, green pygmy geese and night herons among the freshwater mangroves, brolgas, jabirus and dragonflies.

As the last colours of sunset disappear, the egrets become thick in the trees, and magpie geese form lines in the sky, weaving the ongoing story of Arnhem Land into the ancient tapestry of the landscape itself.

Qantas and Jetstar offer flights to Darwin from almost every Australian city.

Davidson’s Arnhemland Safaris start from US$590 per person, per night, including accommodation, meals, permits, activities and tours. A portion of the fee goes to the Northern Land Council. The best season to visit is May–September when the roads are accessible and it’s not too humid. Davidson’s is closed from December to mid-February and is inaccessible by vehicle until April or May each year. Avoid October and November if you are not used to very high humidity.