The Temptation of Tentacles

The Temptation of Tentacles

During the coldest months of the year, the waters off the town of Whyalla play host to a unique marine event. Carrie Hutchinson gets a chill thrill in South Australia.

For the life of me I can’t imagine why she wants me to put my face in the water. We’ve just struggled into the mother lode of neoprene gear – a double layer of wetsuits, plus a hood, gloves and boots – on the shoreline and have waded into the bay. My mask and fins are still looped over my arm, and since Swantje has already done this hundreds of times, I’m not going to argue.

“Oh, shit,” I splutter-yelp seconds later. All those layers of rubber have shielded me from the reality of the water temperature, which is only about 10ºC, but my bare visage feels as though it has been flash frozen.

“You need to get used to it before we go in,” Swantje – pronounced Swanny – tells me, and makes me go face first again. Then I do it with my mask on and at my feet I can see them. We’re only in about 150 centimetres of water, but on the rocky bottom they are dancing and displaying. Thank goodness, because I’ve just spent three days in Whyalla waiting for the wind to change so I can make the acquaintance of the giant Australian cuttlefish (Sepia apama).

On the edge of town, there’s a huge sign that reads: “Where the outback meets the sea.” The coastline where the Southern Ocean ducks into the Spencer Gulf between Port Lincoln and Marion Bay is unlike anywhere else in the country. The shore at Fitzgerald Bay, just out of town, is covered in ridges of ochre-red shingles – it’s a one-off in South Australia. North of the bay, the Freycinet Peninsula Circuit starts at Douglas Point and hugs the waterline. Join it at Fitzgerald Bay and you can 4WD, hike or cycle to Point Lowly, where there’s a lighthouse. But as we stare out over the sea, buffeted by wild winds, there’s not another soul to be seen.

Generally, Whyalla is known for two things: its steel industry and the problems it’s having at the moment, with employment decimated over the past two decades. When you’ve got some time to kill, a tour of the steelworks is an interesting diversion and gives you a taste of life in an industrial town. Our minibus pulls up beside a huge construction and Marge, who’s hosting the tour, tells us to look for plumes of steam that give away things are happening in this part of the complex. We see an automated carriage moving, high up on its rails. When it stops, glowing molten rock is poured into the car. This is the coke oven push and it’s one of the most spectacular processes in the transformation of ore to steel.

After a quick trip to the adjacent HMAS Whyalla, the first ship to come off the line when the town became a major player for the Broken Hill Pty Co Ltd, I find a pamphlet advertising the local Elvis Museum.

Peter Bleeze lives on the outskirts of Whyalla and he’s not just a fan of the King, he’s a super fan. His entire house is emblazoned with memorabilia, from rare posters to life-size statues. “A young police cadet lived down the street and used to babysit me,” Peter tells me in his front room, where Aloha from Hawaii plays on the television. “He had a little record player and used to play me Elvis records. I thought he was god’s gift to singing.

“I got my first t-shirt when I was about 10, then started collecting seriously when I began working.”

He wanders around his house wearing a Graceland hoodie, telling stories of people who’ve visited, before opening the back door so I can check out his piece de resistance. Out in the backyard, beneath the Hills Hoist, is a gold Cadillac, a replica of Elvis’s own. Peter’s quite happy for visitors to don the Elvis sunglasses in the glove compartment and pose in the front seat for photographs.

By this stage, having seen pretty much everything Whyalla has to offer, I decide to check in with Tony Bramley, owner of the local dive shop. Perhaps there’s a chance he’ll green light a quick dive.

“When it’s rough and windy, the cuttles go deeper and hide in the algae,” he tells me in a room lined with racks of wetsuits and diving gear. “They just won’t be doing anything.” That’ll be a no then. 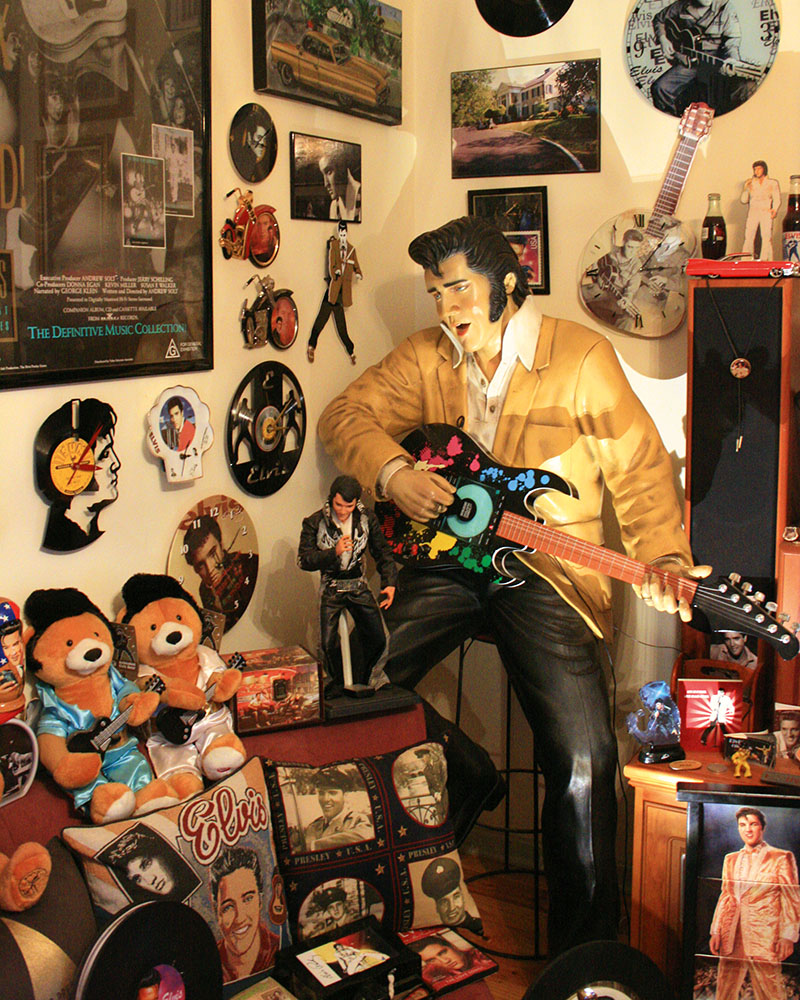 Just a few days before, Tony tells me, they’d had about 600 people visit the congregation over the course of four days for an Experiencing Marine Sanctuaries event. Exact numbers of swimmers are hard to pin down, since the site is easily accessible by anyone with a wetsuit and snorkel. Now there’s a BBC documentary crew in town also waiting for the wind to subside.

It’s not just me, Tony and the BBC dudes excited about Whyalla’s giant cuttlefish. Divers from around the world come here between May and August to witness the only known congregation – not just in Australia, but anywhere – of the underwater creatures.

So far, this has been a good year. “We haven’t seen an aggregation like this since 1998,” Tony tells me. The South Australian Research and Development Institute (SARDI) has estimated the biomass this year to be up to 200,000 kilograms. In 2013 it had been as low as 16,500 kilograms and there were grave fears for the future of the species.

Apart from that, the Spencer Gulf cuttlefish remain something of a mystery. Bronwyn Gillanders of Flinders University has been studying them since the early 2000s and has established the Point Lowly cuttlefish are a subspecies – it’s probably their genetic material that brings them back each year. Female cuttles need a rock ledge to lay their eggs – each is like a large white teardrop hanging beneath a protective shelf – and this is one of the few places offering multiple natural shelters. “The rest of the gulf is mud and mangroves,” says Tony.

He then gets a call. There’s a dolphin in the fenced-off swimming area in the marina, and whoever’s on the other end wants Tony to coax it back out to sea. “There are 30 or so in the Whyalla-Edithburgh pod,” Tony explains. “About five of them are habituated and interact with people.” This is one of them, and he often makes a nuisance of himself. I head down to the shore and, sure enough, there’s a dolphin bobbing about, but the wind is so strong I almost get blown off the pontoon trying to get a better look.

Finally, at the beginning of day three, we’ve come up trumps. The wind has dropped off completely and the sun is shining. Swantje and I load up the ute and head out of town. About 20 kilometres outside of Whyalla is the Santos LPG plant, and this is where anyone who wants to commune with cuttlefish needs to be. A dirt track leads down to a park bench and rocky shoreline. It’s an easy spot for anyone to find, but this hasn’t affected the cuttlefish population.

Depending on how people adjust to the temperature, Swantje tells me, dives here can last anywhere from 15 minutes to an hour. The maximum depth is about six metres.

They are everywhere, hundreds of them. The males outnumber the females, and because they pair off to mate, there’s fierce competition between the boys in the bay. This is where you’ll see them displaying their colours – versions of purple, brown and cream – patterns rippling through their bodies as they do an underwater mating dance. Some of the smaller males will change their patterns to mimic a female then, when they have the big boys’ attention, move in for a bit of action with the actual females. Cheeky buggers!

As we fin around the shallow bay, we see nothing but cuttlefish. Oh, and one lone squid who pulses through the water, possibly wondering where its friends have gone. Occasionally a curious creature swims close, observing us with its big eyes. They seem to be completely unawed by our presence.

It doesn’t seem like long, despite the fact I’ve lost all feeling in my hands and feet, before Swantje’s pointing us back towards shore. “Fifty-eight minutes,” she tells me when I enquire as to how long we’ve been below the surface. “Don’t worry, you should be able to feel your fingers again some time after lunch.”

After we’ve stripped off our gear and are sitting in the cab of the ute blowing on our hands and watching a couple of blokes getting ready to jump in, it hits me: all those amazing creatures are going to be gone in a month. And not just gone back out to sea, but gone completely. Once they breed, the giant Australian cuttlefish dies. Dolphins, Port Jackson sharks and other sea creatures come in and feed on the bodies until there’s nothing left. Not until next year, when the next generation of cuttlefish returns to breed again.

Regional Express has flights from Adelaide to Whyalla. Return fares are about AU$256.
rex.com.au

Whyalla Diving Services offers guided dives with the cuttlefish, as well as gear hire. For one person, guided dives cost about AU$150.
whyalladivingservices.com.au

All other tours can be booked through the Whyalla Visitor Centre.
www.whyalla.com/visitor-guide