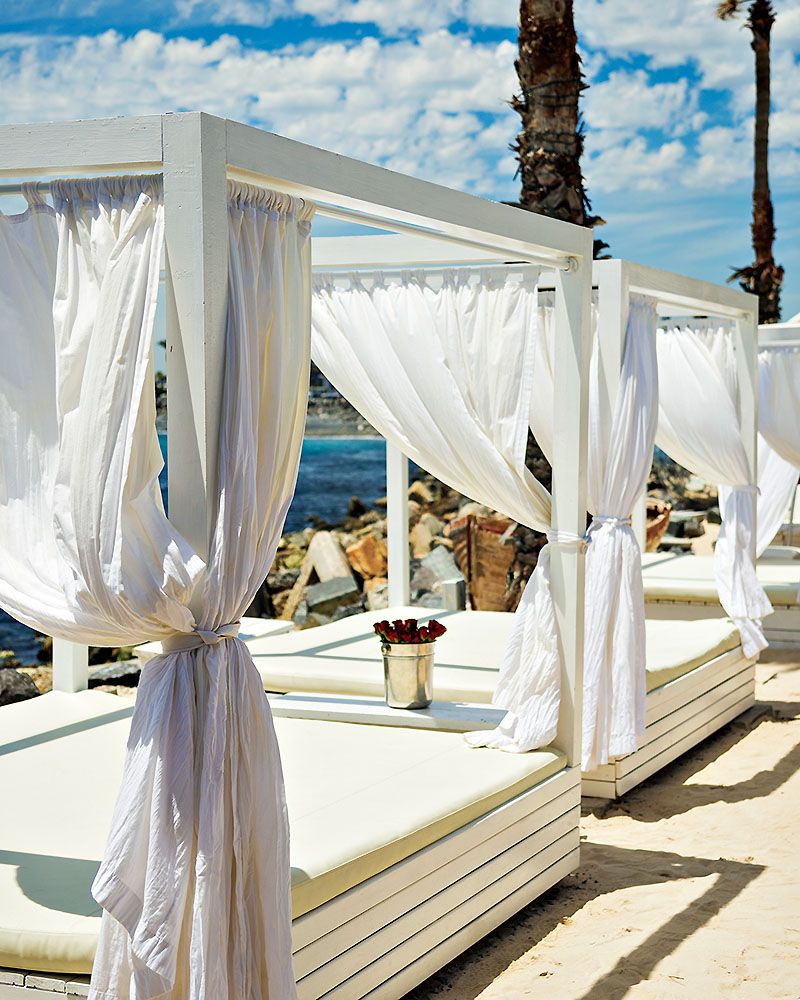 Any bar that has a giant, shiny disco ball as part of its decor means partying business. And disco balls are just the beginning. Cape Town’s Grand Africa also boasts an enormous red lounge in the shape of some very luscious-looking lips, two huge lion statues and a floating love heart. Despite the audacious styling choices, the interiors are inviting and relaxing, complementing the wooden boardwalks that sit atop marshmallow soft sand and fairy-tale–style day beds. The incredible Table Mountain makes up the backdrop while the Atlantic Ocean glistens out ahead. A wide-ranging menu – we recommend any of the seafood dishes – keeps the energy levels up for the DJ sets, which kick off at about 4pm during summer, while the cocktail menu keeps the party going. As things heat up and the nights cool down, this playful, and a little bit cheeky, Cape Town beach club is the place to be.
grandafrica.com

Forget everything you know about the Mykonos party scene, at Scorpios there’s no doof-doof music, no sweaty, gyrating bodies and definitely no overpriced alco-pops. Ideally situated on the sun-kissed southern tip of the island overlooking Paraga Beach, Scorpios is designed to represent a contemporary interpretation of the ancient Greek agora (a gathering place for people to come together to socialise and collaborate). The rustic space, much of it open air, is littered with wooden cabanas, whitewashed walls, knitted hammocks and a quirky assortment of straw baskets, rugs and light fittings. There’s even a boutique bazaar, which stocks a carefully curated selection of products by local artisans – ensuring you can party in the hottest slip dress, should you forget yours. You’ll need to arrive early if you want to secure one of the highly sought-after cabanas by the water – the ideal spot to treat yourself to a Mediterranean feast from the 200-seat restaurant. The setting sun signals a change in tempo, and before you know it you’re kicking up your heels at the chicest party in Mykonos.
scorpiosmykonos.com

All-white everything is the theme of Coco Tulum’s beach club and, we gotta say, this stylish hotel-turned-bar is one of the prettier venues in Mexico’s crowded Yucatán Peninsula. With the crystal-clear turquoise waters of the Caribbean Sea lapping at the white sand beach, it’s hard for Coco Tulum to look bad, but the team behind the design has really taken things to the next level. It’s still a little bit unpolished but that just adds to its charm, alongside a sense of sophistication and cool confidence. Think hammocks, bean bags and deck chairs, rows of hanging fairy lights, and an impressive range of signature cocktails. Plus, recognising a good thing, Coco Tulum has added to the number of its signature over-water swings, meaning there are more seats than they’ve ever had before. The mood is chilled-out here, and the music reflects that, so don’t expect hardcore trance parties that rage into the night. That said, Coco Tulum knows how to throw a pretty epic Sunday sesh, and it’s known to get quite lively so best not to lock in plans for the next morning, just in case.
cocotulum.com

Yellow sand, salty water and summer beach vibes don’t exactly spring to mind when we think of New York City, but The Ramones were on to something when they decided to “hitch a ride to Rockaway Beach”. Set on the Rockaway Peninsula in Queens, this arty-vibe beach is growing in popularity, which makes a nibble and drinks at the Rockaway Beach Surf Club even more appealing. What started as a place for surfers to store their boards is now a beach club with a difference. Rockaway Beach Surf Club embraces the destination’s chilled-out urban beach vibe. Guests, many of whom are locals, are welcomed by the phrase “Live. Surf. Die”, and the club hosts a number of cultural and art events at its on-site gallery. Chow down on some tacos while sipping a fresh watermelon juice or a delicious cocktail or two. It might not be quite the luxury poolside hangout you’d except of the term “beach club” but we’d be happy hitching the next ride to this NYC hangout.
rockawaybeachsurfclub.com

With a reputation as the hottest party island in the world, you expect a certain level of unruliness when it comes to clubs in Ibiza. Tucked away on the sandy shores of Cala Nova, Aiyanna is a breath of fresh air. It’s significantly quieter than the party hot spots of Ibiza Town, Playa d’en Bossa and San Antonio, and refuels drained souls with morning yoga and an on-site Airstream caravan serving fresh cold-pressed juices. There’s a boho-meets-luxury aesthetic happening here, with natural colours and earthy textures dominating the landscape and creating some seriously zen vibes. But it’s fun too, with bright Guatemalan parasols adding vibrant pops of colour, oversized bean bags scattered throughout and strings of sparkling sequins cascading from the roof. Evening live music performances generally get the party started, and when night falls, Aiyanna really comes to life. Best of all, there’s not a hint of exclusivity here. Foregoing a VIP zone, Aiyanna is access all areas, and that’s just how we like it.
aiyannaibiza.com