Feel the need? The need for speed? You’ll get it on these absolute hair-raisers.

Don’t let the name fool you – there’s no way you’ll be smiling once this headache-inducing contraption is done with you. The Smiler is the world’s first 14-loop roller coaster, and while it may not be the tallest (its highest point is 30 metres) it does manage to reach a maximum speed of 85 kilometres an hour. Now that’s uncomfortably fast, especially when The Smiler lasts for a torturous three minutes. But the terror doesn’t just begin the moment the over-shoulder restraints lock into place. Oh no. While lining up in the queue, which begins outside and moves into a darkened room, riders are subjected to projections, special effects, strobe lighting and optical illusions specifically designed to play tricks on your eyes and mind. It’s certainly disorientating enough to make you feel queasy about what’s to come. Located at Alton Towers, the largest theme park in the UK, The Smiler has got enough sneaky tricks and loop-the-loops up its sleeve to guarantee you’ll be left sufficiently shaken.
altontowers.com

Swings are for kids, right? Not this one. The Giant Canyon Swing at Glenwood Caverns Adventure Park is big enough and mean enough to strike fear into the hearts of seasoned adrenaline junkies. Perched precariously on the edge of a frighteningly sheer cliff, 400 metres above the Colorado River, the Giant Canyon Swing is not your average piece of playground equipment. For just on 60 seconds it hurtles four passengers at a time, back and forth, to a near vertical angle. It also rockets to a top speed of 80 kilometres an hour, which is enough to create negative G-forces. That’s kinda like having butterflies in your tummy, only a hundred times worse, and with the added fear of vomiting or passing out. Or both. It’s so scary, riders must sign a liability waiver, and anyone under the age of 18 must have a parent’s or guardian’s signature. Even owner Steve Beckley has only ever ridden the Giant Canyon Swing once. Now if that’s not an indicator of how petrifying the experience is, we’re not sure what is.
glenwoodcaverns.com

You’ve got to question the state of mind of whoever conjured up the nightmarish, stomach-churning situation that is Insanity the Ride. Positioned atop the tallest structure in Las Vegas, The STRAT Hotel, Casino and Skypod, this terrifying centrifuge ride uses an enormous mechanical arm to dangle passengers 265 metres in the air. As if that wasn’t enough to have you murmuring a couple of Hail Marys under your breath, all trapped thrill-seekers are then tilted to an angle of 70 degrees (in other words: you’re staring directly at the ground below) and spun around at speeds of up to 64 kilometres an hour. Apparently Insanity is also programmable with various different motion sequences, which means no two rides feel the same. We want to suggest downing a couple of strong, oversized, Vegas-style cocktails before allowing yourself to be strapped into this sky-high monstrosity, but that could end badly for everyone involved. Instead, all you can really do is sit back, admire the view and hope your seatbelt is done up.
thestrat.com

There are normal roller coasters, then there’s the X2. This mechanical beast, which you can find by following the howl of deathly screams all the way to California’s Six Flags Magic Mountain, is in a league of its own – so much so, it’s considered the very first 4D coaster. That means riders are placed in extra-wide 360-degree rotating seats that twist and flip independent of how the main train navigates the tracks. It also runs on four rails, instead of the usual two. Sound distressing? That’s not the end of it. While you’re spiralling through the air headfirst and facedown, the X2 is also accelerating to speeds of 122 kilometres an hour and climbing to an elevation of 60 metres. Oh, and your feet are dangling weightlessly in the air too, which any frequent ride-goer will know is a truly awful sensation. Chuck in a couple of inversions (corkscrew-like manoeuvres), two ultra-rare raven turns (half loops that turn into sheer drops), a backflip and the added drama of a pair of flamethrowers, and you’ve got yourself one hell of a heart-thumping ride.
sixflags.com 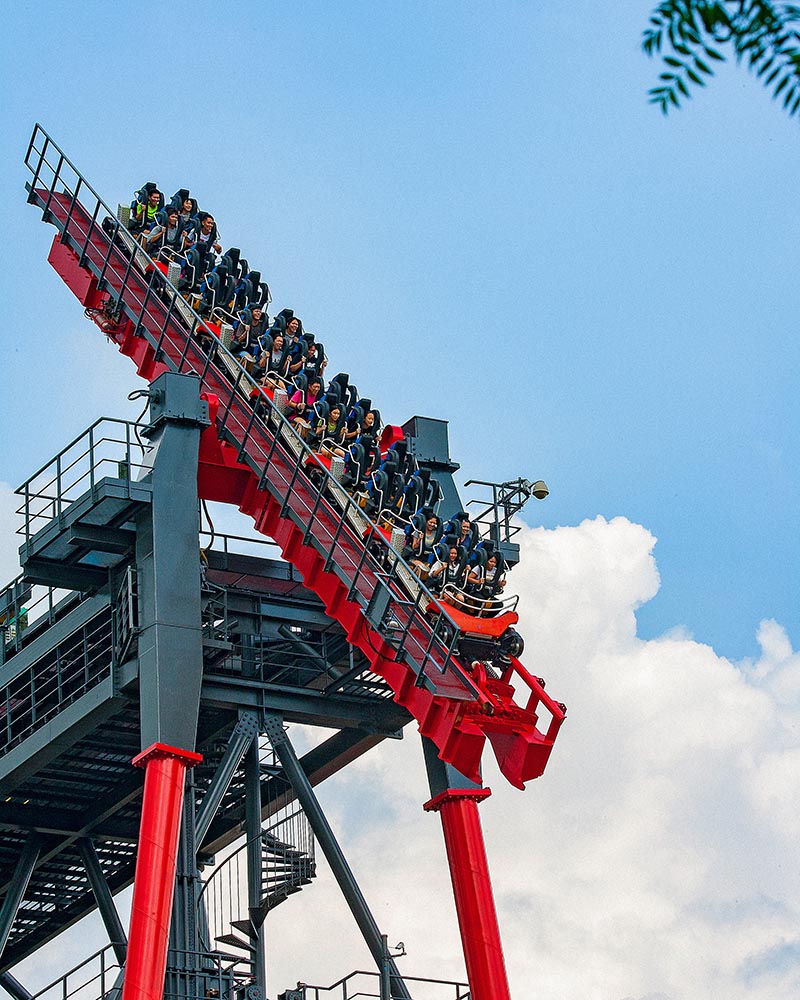 Where’d the track go? Find out on the Gravity Max. Click to view gallery

When it comes to roller coaster construction, surely the general rule of thumb is that the track should be fully complete – with no obvious gaps – before it gets the green light for real-life human passengers? Apparently not, according to the crazy people behind the Gravity Max at Taiwan’s Lihpao Land theme park. The thrill (if you can even call it that) of this ride is that it ascends dizzyingly fast to the very edge of a seemingly track-less horizontal platform, before tilting forward to a 90-degree angle – pausing for dramatic effect and maximum scares, of course – and magically reconnecting to the downward track. It then proceeds to shoot through a pitch-black tunnel and straight into a 360-degree vertical loop, reaching a max speed of 90 kilometres an hour and 3.5 Gs of force. The Gravity Max is the world’s only tilting roller coaster, is the first with a true 90-degree drop, and it goes for a blood-curdling two minutes and 26 seconds. Ride at your own peril.
lihpaoresort.com