Danika Porter explores the raw nosh of Tasmania’s Bruny Island, in a balancing act of the senses, and the waistline.

I’m butchering an oyster in a rookie attempt to shuck my waterside snack. The shell splinters as I clumsily try to crank it open with a knife, narrowly avoiding skewering my hand in the process. Eventually it hinges open, revealing a plump nugget bathing in a small puddle of the purest Tasmanian ocean water. My salivating taste buds are not disappointed when I slurp down the freshest, saltiest oyster I’ve ever eaten.

Our delicious bounty was plucked minutes ago from Ford Bay’s shallows by Tom, one of our guides on the Bruny Island Long Weekend food and walking tour. The private farm on the island was started by a Sydney stockbroker who decided to try his hand at growing oysters after the global financial crisis of 2007. We have exclusive access to these self-serve oysters, and it’s a delicious way to cap off our first day. Tom shucks as fast as he can to keep up with the all-you-can-eat demand, but eventually he admits defeat and declares the pop-up restaurant closed. It’s a natural protein shot following the day’s five-hour hike.

Bruny Island Long Weekend taps into the beloved institution of the three-day weekend, offering a mate’s insider tour of the island’s gems. Beyond the tourist trail, it combines three days of hiking with premium local food and wine. I’m here to taste it all and hopefully burn it off. The trip is ambitiously labelled as calorie-neutral but that seems unlikely faced with the prospect of all the fine produce.

We arrived this morning via the Derwent River, skirting down the coast on a roaring spin onboard Pennicott Wilderness Journeys’ giant inflatable craft. A swift 45-minute jet ride from the Hobart docks, Bruny Island is a miniature copy of the Tasmanian mainland. It has a unique microcosm of diverse weather, wildlife, terrain and food, packed within 362 square kilometres. Today’s walk covers 12 kilometres along a squiggled coastline bordered by rugged bushland, leading us to the peak of Cape Queen Elizabeth.

Tom and our second guide, Dave, lug weighted packs, a heavy comparison to our much lighter daypacks. The group settles into a cracking pace and within minutes of leaving the van we are deep in the wilderness and totally off the tourist grid. As the sandy path gives way to a steep rubble goat track, it’s evident that this weekend is no leisurely stroll. The terrain varies between muddy sludge, crumbling rock and knee-jarring sand. I focus on negotiating my steps up the lung-straining incline over the first cape, wary of stepping on an agitated jack-jumper or a slithery surprise. It isn’t long before a piercing yelp ahead halts the group. A venomous copperhead snake blocks our track but while I fight my urge to flee, it graciously gives way.

Bruny Island treats us to four seasons in one hour. One minute my skin is sizzling under the searing Tassie sun, then rain and icy winds force a pit stop to layer up. Before long, I’m steaming and overdressed as the sun makes its return. Thankfully, bushwalking funnels your focus on just the few metres ahead, making life’s complexities and woes vanish. It’s very cathartic finding a rhythm and I let my mind drift  off with the muted roar of the waves. 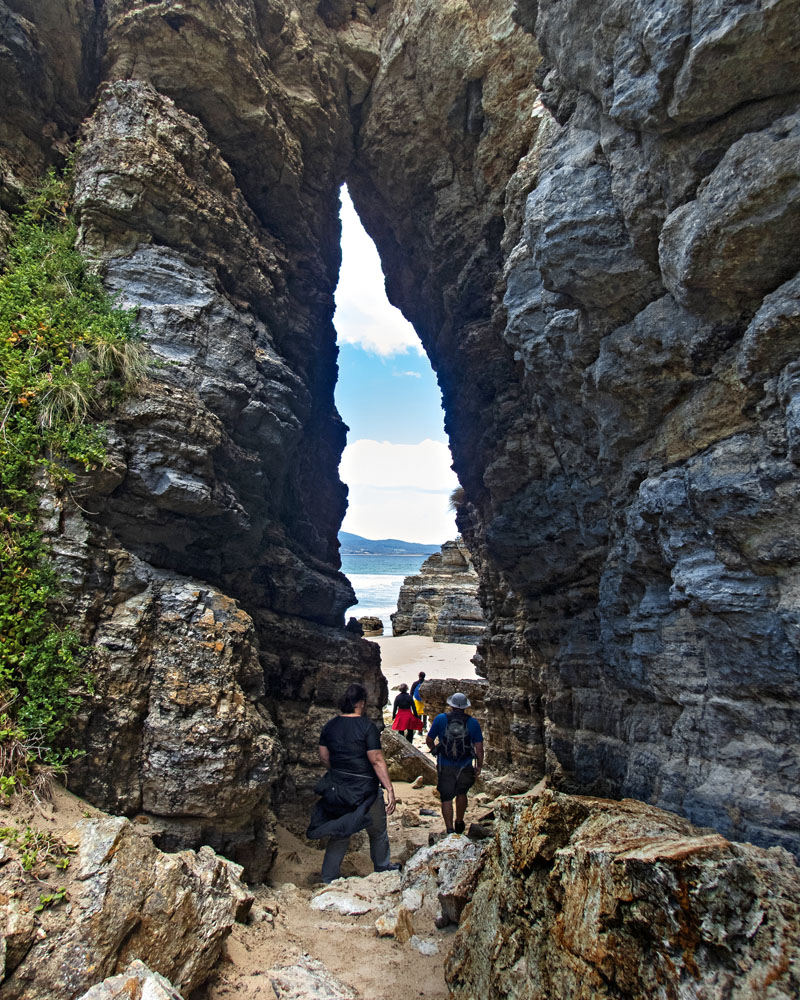 Weaving through a gallery of stunning weathered rock formations. Click to view gallery

We are mere specks measured against the epic surrounds. The summit exposes a dramatic panorama that seems impossible to even partially conquer in just three days. Layers of peaks wrap around us, while below dozens of bays cut into the mainland. It looks remote and inhospitable under moody skies, but transforms as the sun escapes the clouds and lights up the turquoise waters and blinding white sand.

We traverse down the ocean side and hit rolling sand dunes. Sheer cliffs of mudstone and Jurassic dolomite drop straight into the water, and tessellated sculptures, beaten by centuries of weather, decorate the beach like an open-air gallery. Our shortcut home is blocked by the tide and we’re at an impasse with the cliff base, but rather than backtracking we opt for a little off-roading, climbing up and over the precarious rock formations pounded by the waves. The pace lifts during the final stretch, a silent collective push to bring forward happy hour.

The camp is tucked deep on the south island within South Bruny Forest, the island’s oldest forest. Four basic apex tents host luxurious king-sized beds within their canvas walls and a toilet hut features a long drop toilet with a dignified modern throne on top. A cubby-house nestled on the lush forest floor is in fact the outdoor shower. It is liberating being exposed in, and to, nature. Immense eucalypt trunks tower past the open front with the rustling canopy high above. I huddle under the steaming blanket of water with a front row seat to the feathered entertainment of this twitchers’ paradise, not wanting to turn the water off and give the next person their turn. I relinquish the urge to stay, knowing happy hour awaits our arrival in the dining room: a serving of Bruny cheese, crisp Sauvignon Blanc and a roaring fire. Tom and Dave impress with a feast of fresh scallops in white wine, lamb rump with chimichurri, and leatherwood honey panna cotta, filling our bellies for a night of slumber surrounded by nature.

My body awakens like a seized-up Tin Man, but is swiftly remedied with a morning shower to soothe it into submission. Today is a 15-kilometre hike through the South Bruny National Park, which starts with a long walk along Cloudy Bay. To the eye, the beach appears a short stroll, but an hour later we are still plodding along the coastline. Reaching the base of East Cloudy Head, Tom breaks the news that we now face a two-hour uphill slog. The terrain is distinctly more mountainous and rugged. We push through sharp, attacking thicket as we follow a mostly concealed overgrown track. It’s definite bush bashing with the landscape serving up its fair share of back-handers and kneecapping.

We plod one foot after the next, starting to hope each rise is our final hurdle. In my mind’s eye, our ant-line formation resembles the Von Trapp family fleeing Austria in the closing scene of The Sound of Music. It feels extremely isolated with either looming mountains above or sheer cliffs below. The powerful aura of hiking a dramatic coastline that has remained unchanged since the first European explorer, Abel Tasman, reached its shores in 1642, isn’t lost on me. At the pinnacle of the climb, I struggle to pinpoint our origin in the distance. What we’ve covered feels expansive, but in reality we’ve only trekked a tiny portion of the map. 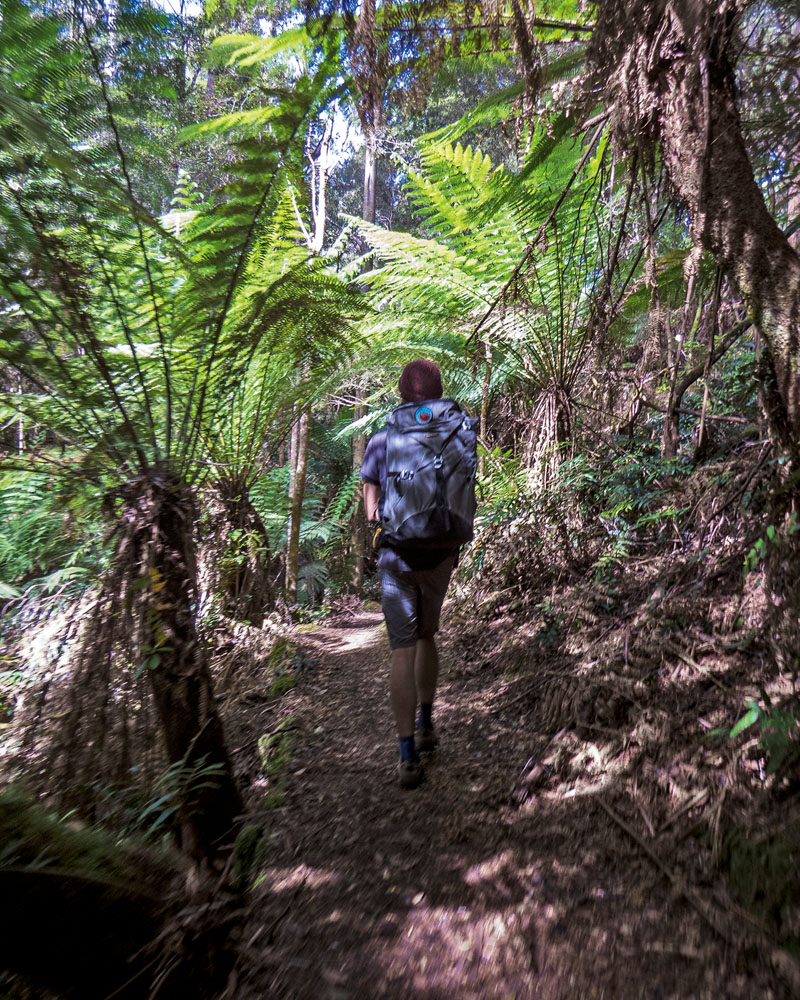 Dwarfed by the giant ferns along the Mavista rainforest walk. Click to view gallery

We retrace our steps downhill in record time. Along the descent, chatter of ‘wine o’clock’ propels us forward, and a proposed ocean plunge divides the group – it’s a chilly venture considering the polar neighbour down south. I hurriedly change behind a tree, then sprint and dive before second thoughts kick in. The temperature is shocking, numbing and then outright painful, but also energising.

We collect some renowned smoked pork from chef and host of SBS series Gourmet Farmer, Ross O’Meara, before we head back to debrief on the deck. The Bruny oysters, pork rillettes, cheese and wine are fine examples of how this small island, and greater Tasmania, has firmly stamped its place on the global gourmet map. The weekend definitely tipped over into calorie-positive mode, but who am I kidding? I was never here to balance that line.

Fly to Tasmania’s capital, Hobart, from where it’s a 35 minute drive to Kettering (or 1 hour via local bus) and then a 20 minute ferry across to Bruny Island.  Ferries depart every half an hour and bookings are not required.

Find out everything you need to know about Bruny Island here: