In Victoria’s prized vineyard regions, Nikola Sarbinowski follows in the footsteps of bushrangers on a hiking tour taking in views, vino and a touch of luxury.

A sharp crack sends a feathered missile, who is screeching obscenities about trespassers from above the treetops, hurtling from its guard. The cockatoo isn’t the only one spooked. Nothing in this bushland makes that type of noise without a helping hand. Rationalisations fire around my skull as I scramble over the last of the boulders separating me from the edge of the ridge. Was it a bursting balloon? Firecracker? Gun? This is bushranger land, after all.

In 1870 under the cover of a wild storm, troopers crept between these peppermint trees and candle bark gums on the hunt for the infamous Harry Power. Sixteen months prior, the Irish convict had escaped his road gang and taken to highway robbery to occupy his time. Power tallied more than 30 crimes while on the run, and even took an apprentice named Edward under his wing, before his trainee’s uncle dobbed him in for a £500 reward.

Warnings from Power’s trusted security squad – a noisy peacock and hounds from the homestead below – were muffled by the gale. The coppers uncovered him snoozing in his hideout, now known as Power’s Lookout, in the wee hours of the morning. They celebrated their catch with a feast from the thief’s well-stocked supplies before tossing him under lock and key. Despite being one of Australia’s most flagrant bushrangers his legacy faded, while his student rose to such fame he remains a household name almost 150 years later. Good luck finding an Aussie who hasn’t heard of Ned Kelly.

Metal clings to the side of the ridge, extending a platform over the lichen-covered rocks that once formed a riverbed 350 million years ago. It’s easy to see why Power chose this spot as a hideaway – it’s tough to reach on foot or horseback, and has sweeping views of Victoria’s upper King Valley. My guide for this Girls Trekking Adventures trip, Frith Graham, stands on the podium next to a cluster of walkers, a chilled bottle of Mumm in hand. Its exploding cork is the source of the bird-banishing bang. We may not have found an outlaw with a juicy bounty up here, but as we sip from champagne flutes the moonlight illuminates the valley and I’m feeling as smug as those coppers the night they nabbed Power.

Our three-day expedition started that morning among the giant umbrella-like tree ferns and eucalyptus on the O’Shannassy Aqueduct Trail near the Yarra Valley. We set off in a mini-van, passing farmland and the transmission towers of Bonnie Doon, immortalised as the holiday destination of the Kerrigan family in the classic Australian flick The Castle.

It doesn’t take long to figure out this isn’t a carry-your-own-tent-and-dehydrated-curry kind of hike. “I get off the plane, meet up, and don’t have to make a decision for the next few days,” says Fiona, one of my fellow hikers. I have to admit, handing over the reins of organisation is incredibly liberating. Our days are to be spent decision free, wandering through some of the most picturesque parts of King Valley and working up a thirst for the region’s most famous product, wine.

Without a single traffic light, Whitfield, our home base in the valley, is a blink-and-you’ll-miss-it kind of town. “Officially, the population is 421, but I don’t know where they all live!” says Anna-Kate Pizzini, cheesemaker, member of the Pizzini Wines family and one of our guides on this trip.

Despite its tiny population, the town boasts a cafe, an epicurean larder and our accommodation: the award-winning gastropub, Mountain View Hotel. It’s far from the type of establishment Kelly would have boozed in, I muse, as German chef Ben Bergmann greets us before our five-course degustation. Bergmann worked in Michelin-starred restaurants around the world before being drawn to the kitchen of the Pizzini-owned hotel two-and-a-half years ago.

Between courses of duck breast with rhubarb chips, twice-cooked red snapper, and black quinoa-crusted wagyu beef sourced from the next town over, I find myself plundering the contents of the little hessian sack on the table, which resembles a bushranger’s moneybag. The biodynamic sourdough within is best slathered with smoked and salted French butter and washed down with a glass of King Valley sangiovese.

Almost as soon as a dish stars on the menu Bergmann sets out to create something new, so the fleeting existence of the masterpieces we devour makes them all the more impressive. 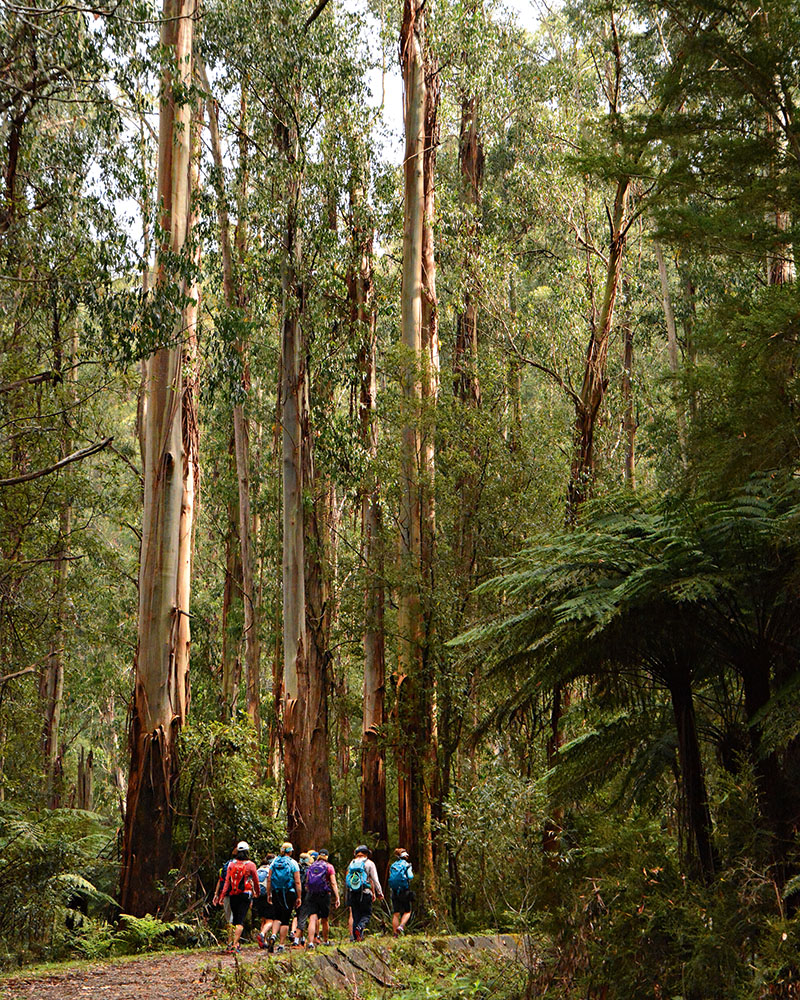 Next morning, we stamp up a sweat and work off last night’s sweet finale – a deconstructed black forest strudel served under a veil of dry ice smoke. Anna-Kate reels off names of vineyards – Murtagh Brothers, Boggy Creek, Gracebrook and La Cantina – all visible as we stride higher into the hills, dodging burrows and block-shaped droppings.

“That’s wombat poo, because it’s got a square sphincter,” explains Frith, when I ask what type of critter could leave behind so much muck. Our days may be studded with gourmet food and bookended by hot showers and comfortable beds, but none of these women – a group of long-time friends from Toowoomba – are afraid of getting their trail shoes dirty or slogging up a mountain.

We stop to gulp down views of the hazy valley. Later, we stroll through an avenue of 80-year-old chestnut trees where we roll pods beneath our feet, freeing the glossy nuts from within. I drink up that feeling of smugness once more as Anna-Kate tells us we’re trekking through private properties normally closed to the public. These vistas are exclusive.

Back when rangers looted gold and horses, this area was bush and just a few rolling farms. “Even when Nonna and the Italians came it was called the sleepy valley,” says Anna-Kate.

Nonna Rosetta and Roberto Pizzini arrived from Italy in 1955, establishing tobacco farms before their sons switched to growing grapes. Since then King Valley has become one of Australia’s premier wine-producing regions. With its high altitude, microclimates and healthy rainfall, it’s an ideal place to cultivate a wide variety of grapes, particularly those of Mediterranean heritage. 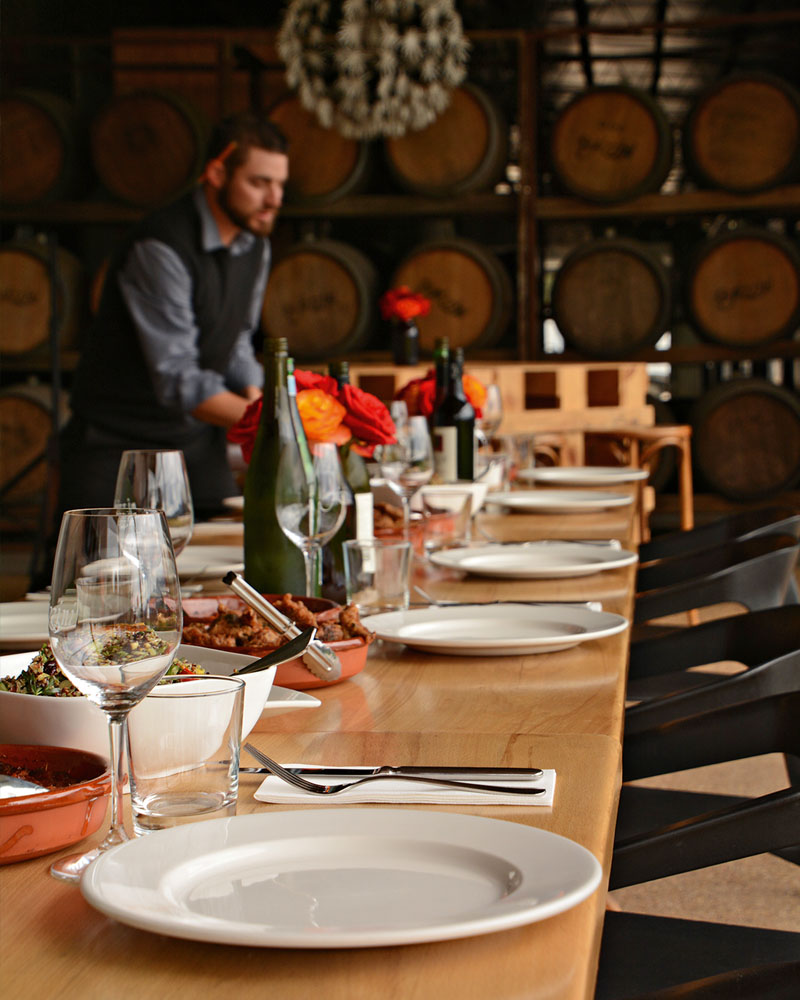 Ready for a boozy lunch at the Pizzini winery. Click to view gallery

The Pizzinis first planted riesling back in 1978 to sell to Brown Brothers, and chardonnay, sauvignon blanc and shiraz soon followed. It wasn’t long before they started experimenting with lesser-known grapes from Italy, and sangiovese and nebbiolo snuck into the soil.

“The region is really good for those varieties. They love the warmth of the day and the coolness of the night,” says Alfredo ‘Fred’ Pizzini, founder of the winery and father-in-law to Anna-Kate, while we cool off from our morning’s stint with a glass of refreshing prosecco. Tallying 6.5 grams of sugar per litre, compared to the usual 10, it’s far less sweet than any prosecco I’ve ever tasted, and might just be my new favourite drop. It sure beats the usual post-hike electrolyte drink.

Not content with their collection, Fred and his son Joel, now head winemaker, kept planting, and the vineyard boasts 16 types of grapes, as well as a little patch with three more they’re experimenting with. “It’s a bit like a pantry. You don’t just have salt and pepper, do you?” he says, explaining that each new variety gives them the chance to make a new blend or improve an existing style. It’s clear why chef Bergmann, with his ever-changing degustation menu, is such a good fit for their hotel in town. 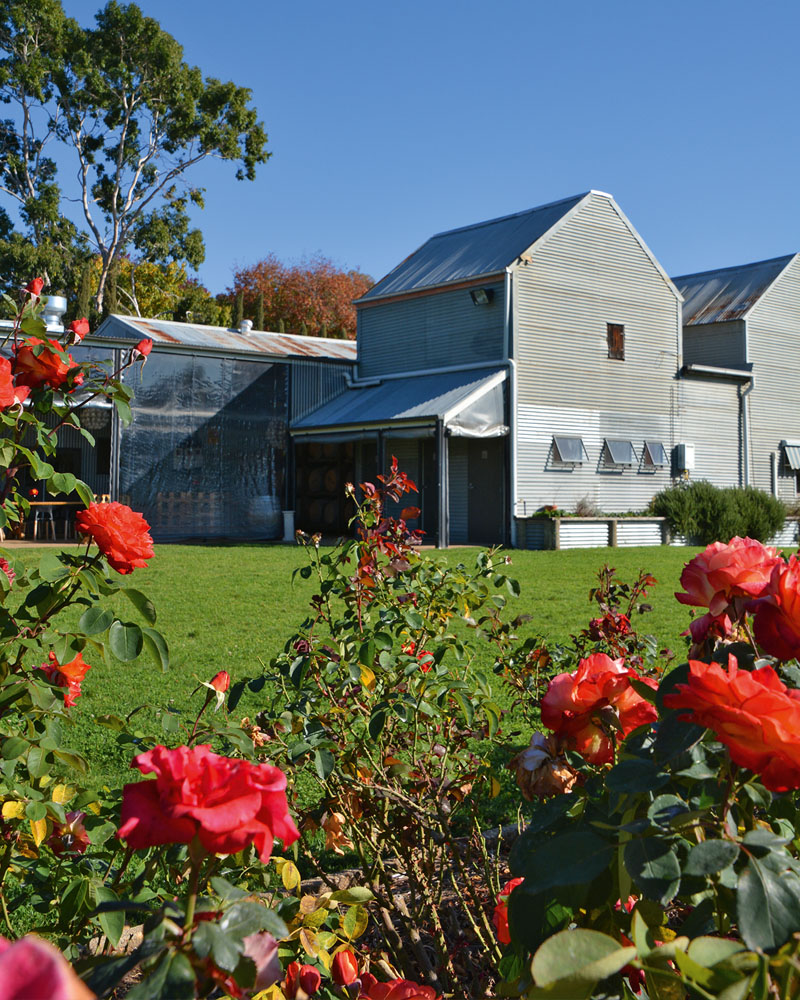 Old tobacco kilns have been repurposed at Pizzini Wines. Click to view gallery

With some reluctance we haul our bellies, loaded with fine Italian cuisine, away from the dining table sprawling outside the Pizzinis’ former tobacco-drying kilns, now converted into the cellar door. This is technically a hike, after all, and we’ve got another winery to march towards. Plus, Frith promises we’ll return tomorrow to taste plenty more vino and test our culinary skills during a cooking class with winery co-owner and Fred’s wife, Katrina Pizzini.

We trundle past rows of vines, their autumnal leaves flushed like splashes of aged riesling and pinot noir. Cappuccino-coloured horses and a family of sheep graze by the street, aptly dubbed Prosecco Road, which we follow to Dal Zotto Wines, the first vineyard in the King Valley to create the bubbly drop.

For the second time in a day we wrap our mouths around more Italian varietals. The 2015 pinot grigio offers notes of pear and I enjoy the nutty flavour of the 2014 garganega, but it’s the reds that make me wish I had the strength of a highwayman to carry home a few cases.

Erik Nap, the trattoria manager, sploshes nebbiolo into our glasses, describing how the drop is lighter than you’ll find in the motherland. “If you order it in Italy, they serve it with a knife and fork,” he chuckles.

Apparently the 2012 we’re sipping requires a few more years sealed in a cellar to smooth out the tannins, but it seems a bit cruel to keep such a tasty drop under lock and key. This is bushranger land, after all, and I’m ready to ransack the bounty.

Girls Trekking Adventures takes small-group, three-day trips to the King Valley from US$1200, as well as other women-only hiking experiences around Australia and the world. The package includes guides, shared accommodation, on-ground transportation, meals, wine tasting, a cooking class and a four-week training schedule.

Who you hike with can be as important as where you go, so the company gets to know a little about participants before they book, aiming to assemble well-matched groups.
girlstrekkingadventures.com.au

Depending on the lesson, you’ll make and eat anything from gnocchi and macarons to smoked and cured meats. Book well in advance if not on a tour.
pizzini.com.au